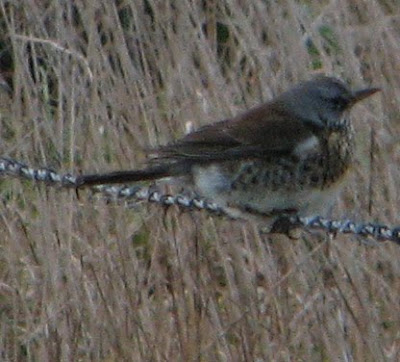 Went out fairly early for a tootle round in the snow and when I got back the family had done the Garden Birdwatch. The total included Greenfinch, 2nd record for the garden, and two males were around the feeders. They also recorded Hoodie which rarely lands in the garden, Louise had cunningly put bait down the end by the wall and that lured Common Gulls to land also. The one that didn't count as it was outside the hour was the male Sparrowhawk that hurtled through after the sparrows late morning (no doubt the one you saw yesterday Julian). 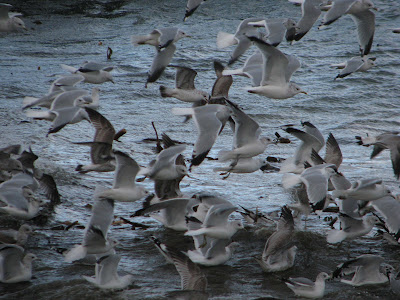 My tour around was fairly productive, a mass of gulls and Guillemots flying on and off the cliffs at Marwick, plus excellent views of two or maybe three Hen Harriers. Fulmars and Gannets off both Marwick and Birsay, with about 100 Purple Sands at Birsay. Loch of Skaill held 23 Whooper Swans, some of which were quite confiding. The Loons finally gave up the Greenland Whitefronts with 52 counted and another male Hen Harrier. 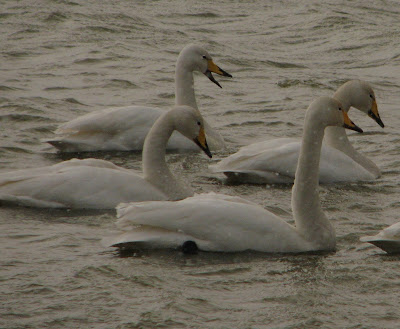 Late in the afternoon we all went to Bay of Skaill where there were plenty of gulls, unfortunately, as in the morning, none were white winged. 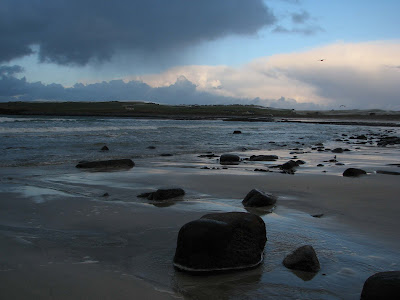 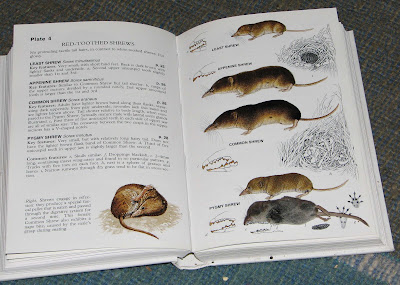 One of the cats spent all night (apparently) staring at a couple of our still packed boxes. It wasn't too much of a surprise then to find a dead shrew nearby this evening - bit of a relief as the last thing cats brought in was a rather large Brown Rat, dead fortunately. Looks like a Pygmy Shrew to me, presume they're supposed to occur here.

Just checked, Pygmy is the shrew that occurs here, that makes id easier.
Posted by Alastair at 10:38 pm 2 comments:

A field trip with small people got me two drake Pintail on Loch of Stenness. Also on offer were two Slavonian Grebes and a Little Grebe near the Harray hide.
Posted by Alastair at 10:24 pm No comments: 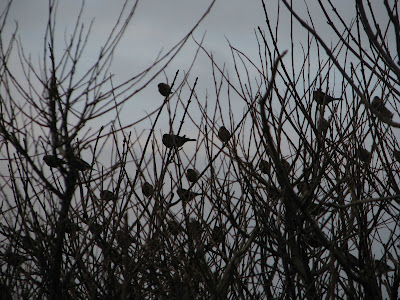 Twite - part of the large flocks at Costa
The corvid roost in the neighbouring sycamores was huge yesterday evening. A vast flock came in from the north and included 300 Jackdaws I guessed. I was surprised to learn this might be an Orkney record count of this species so I lay in wait today. Much good that did me really. The corvids came in from the west in two flocks, at 17:05, in the dark. Lots of jackdaws would be my best guestimate.

Today we headed to Costa where there was a WEx event. The huge flocks of Twite were impressive and Linnet, Greenfinch and Merlin were also added to the year list. Novelty bird of the day was the Water Rail feeding in the garden which was appreciated by all, rubbish picture below. 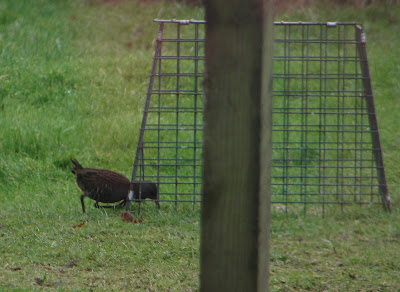 Thanks to D & P for outstanding hospitality.
Posted by Alastair at 8:19 pm 2 comments:

Not much to report except the Ravens displaying over our garden (by The Shunan) for an hour or so this morning, I counted 10 at one time but I think there were at least 12 - they kept flying into the trees and flying off over the back.

Loch of Bosquoy holds a couple of grebes but they were very distant and the light was not so good and they were hungry grebes and kept going under the surface - looked like Slavs though.

Fulmar were going south at about 3,800 / hour yesterday afternoon from Marwick Bay, at the same time about 150/hour were going north. This is a real contrast to a week or so ago when the only Fulmars to be seen were buzzing around the cliffs or sitting on ledges.

The pilot whale is still on the beach.
Posted by Alastair at 11:15 pm 2 comments:

Today was a no birding day due to party business - rescheduled children's party to deliver. Managed to record all of 8 species of bird in the day, wild and windy.

Musical clips in the side panel have been changed.
Posted by Alastair at 8:23 pm No comments:

The end of isolation

Managed to get a car to the house this evening. The route up from the main road is still unsafe but coming down from the top was ok, the "central reservation" was green grass. Hopefully I can get the car out again.

This in contrast to early yesterday morning when the only way to get to the car was to crawl across the ice, the camber and the wind making it impossible to walk to it, even with a ski stick.
Posted by Alastair at 8:02 pm No comments:

Large, lost and on the beach 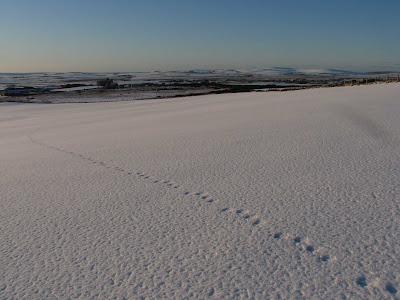 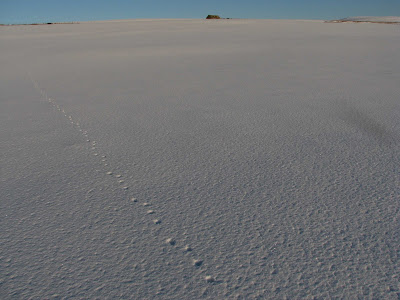 Having spent most of the morning doing other things and then eating lunch in the garden, its tropical here at the moment, honest, it was late afternoon before we got down to Marwick Bay and the cetacean. 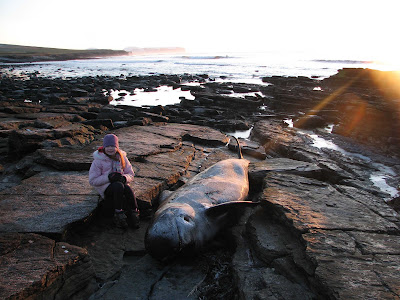 The beast proved to be a Long-finned Pilot Whale as was correctly suggested on Orkbird yesterday. I now understand why they are called "long-finned" as the flippers are extraordinarily long. I came away with the impression that it was a male based on the shape of the dorsal fin shape but as the photos just about show it has female genitalia - a single long opening (males have two shorter openings) and one or maybe two mammary glands are visible - thanks to SS for putting me right on this (orkbird posting). 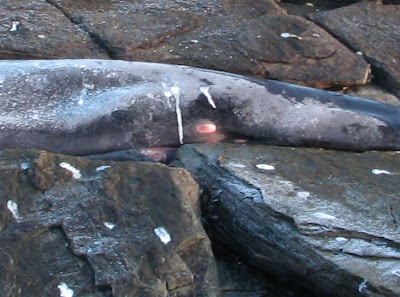 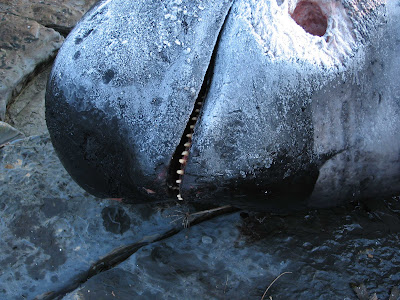 The teeth aid seperation from Risso's dolphin a possible confusion species, Risso's usually only has teeth in the lower jaw and only three to seven on each side at that. 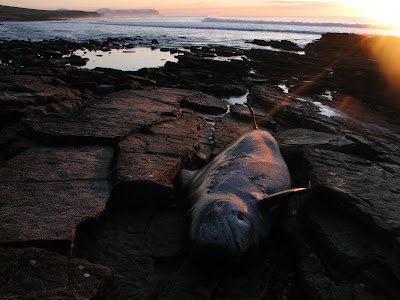 I'd much rather see a live one but this has been interesting, I hadn't thought to look for the genitalia to determine sex as I didn't know there were clear external differences and I hadn't thought that Risso's might be a confusion species, apparently some Risso's can look very dark. Cetacean's are pretty tricky to ID in the field, at least this one stayed still and I could see all of it. The only time I've seen live Long-finned Pilot Whales (and managed to know what they were, with some help) was a pod off the back of The Scillonian when I'd gone to see Wilson's Petrel and I haven't seen a dead one before. Hopefully this one will have a secondary role now and bring in a nice Ivory Gull to tidy it away before the next storm carries it off the beach. 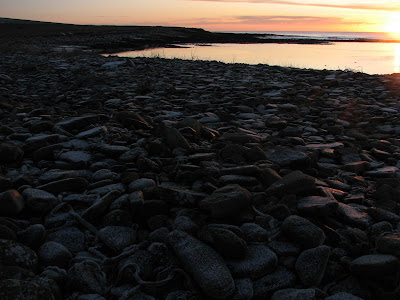 Not much else to report, no bird species were added to the year list today.
Posted by Alastair at 8:57 pm No comments: 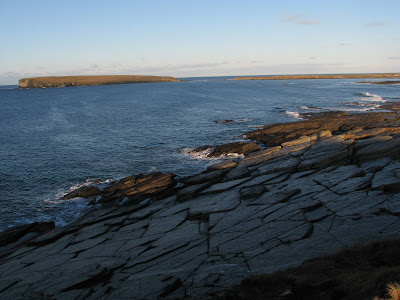 Went to Birsay today to try to find the dead cetacean, rumoured to be a Minke Whale. We walked all the way along to the end of the Links beach and couldn't find it. However managed a significant first, falling over on frozen beach sand, it hurt just as much as a black ice pavement, it was solid! News later came out that it was round at Marwick and is a Long-finned Pilot Whale, that'll be tomorrow's outing then.

However, not entirely in vain as managed to add a few species to the county year listing effort, best of all was a flock of at least 63 Snow Buntings on the Links, generally near the cafe; pix below and movie in the side panel when I've uploaded it. 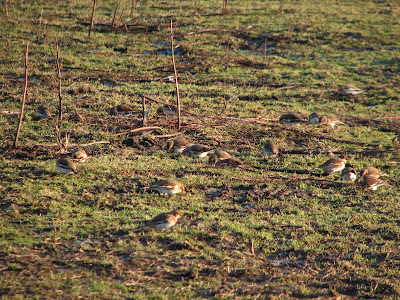 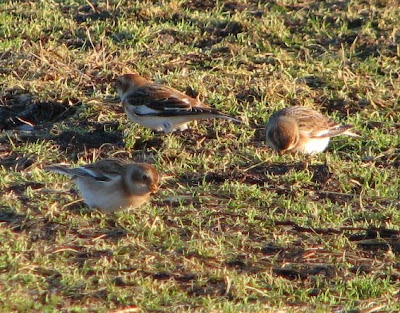 Back at home a Dunnock put in its first appearence of the year in the garden and three Ravens were displaying. On distant Loch of Bosquoy the wildfowl numbers were much decreased and there were no grebes.

Shopping is still being brought in by sledge, we used the walk up to the cars this morning recovering the items that had fallen off last night, unfortunately the crumpets hadn't survived, some hungry beastie had opened the pack and scoffed all but one.
Posted by Alastair at 8:07 pm No comments:

It was blowing by the PDC so I didn't look to carefully, not very many gulls about in any case.

Getting the shopping from the car is still a bit of a performance, however, squeezing on to the sledges with the bags means much of the trip is effort free; try to avoid sledging over the margarine though Louise! En route, the three wing-barred finches overhead were heard to call, Goldfinch, nice.
Posted by Alastair at 10:48 pm No comments: 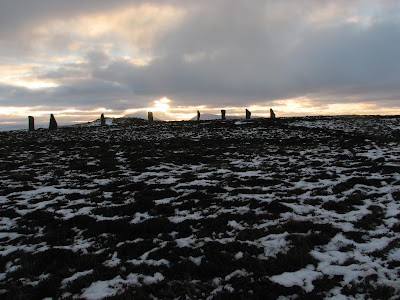 The Dunnock have either vacated the garden or are playing elusive. No sign of the Stonechats either.

Whilst Ellen was at a birthday party we headed for The Ring of Brogdar. The one open pool on Loch of Stenness was impressively packed with birds including more than 70 Goldeneye (mostly drakes) and a good number of Scaup. Unfortunately I'd not packed the scope so resorted to photographing the pool, probably more useful will be to revisit tomorrow. 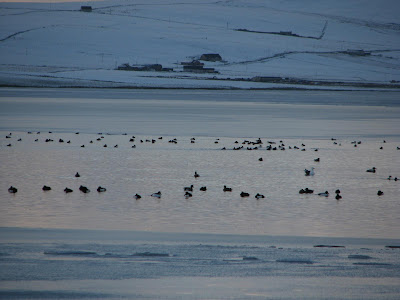 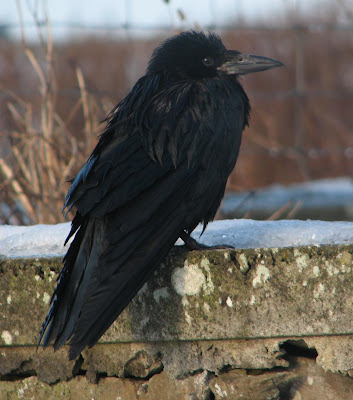 It's a bad time for Rooks. Icey, solid ground is leaving them very hungry. This first winter looks in bad shape.
Posted by Alastair at 8:21 pm No comments:

On the icey way to Birsay

The roads this morning were just ice. Overnight rain followed by a pre-dawn hard frost has left everywhere treacherous. 25mph was about top speed.

A fine, still morning and the tide was in. Purple Sands were all along the shore of the north bay and I counted 166. The bay was covered in Wigeon, there had been just two on nearby and almost completely frozen Loch of Boardhouse, estimate 500. Two Red-throated Divers were out in the bay, one was a first winter, being very dusky over the face and neck, the other a smart, contrasty adult. There were fair numbers of other waders but most notable was a Grey Plover. Gulls were in generally short supply, hopefully the coming northerly will bring something interesting in the next few days.

Mario has taken over in the household as the aquisition of a second DS has allowed for competitive play. In my day a denzin of the amusement arcade I am struggling against Ellen (7), let alone Mollie who consistently tramples me into the dust and nicks my stars, no pity for the old man.
Posted by Alastair at 8:33 pm No comments:

The Peregrine returned late lunchtime but again failed to acquire pigeon upon which to dine, spectacular though. I eventually went for a brief slide up and down the track but added only Wren, Jackdaw and Song Thrush.

The corvid roost in next door's trees is approaching 500 now. They've just flown out and a good proportion are sitting in the neighbouring snowy field. Now slowly trickling back up into the Sycamores. I counted one flock of 42 Jackdaws fly in but I'm guessing at about twice that number in total and 400 or so Rooks.

Tomorrow, weather permitting I might go a-birding. Birsay beckons.
Posted by Alastair at 4:03 pm No comments:

Woodcock has just flown through the garden.
Posted by Alastair at 1:40 pm No comments:

Peregrine roared into the garden by the kitchen window where the rape seed is liberally sprinkled, Feral Pig's escaped unscathed however.
Posted by Alastair at 1:37 pm No comments:

The track was passable yesterday so a late afternoon trip to Brough of Birsay to burn off a bit of energy and pre-birthday excitement (Mol's) was taken. There's no snow down on the coast, or very little at least. The last birds of the year were 4 Redwing, a ring-tail Hen Harrier and a Kittiwake shearing east (bit of a fib because when we got home the usual Starlings and Blackbirds were all around the house).

The first bird of the new year was Rook, heard from the garage when I closed up early in the morn.