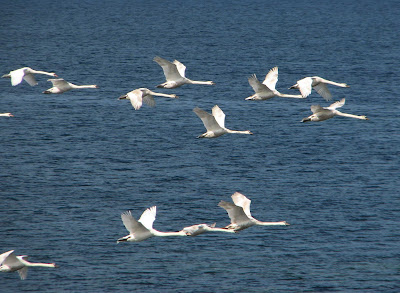 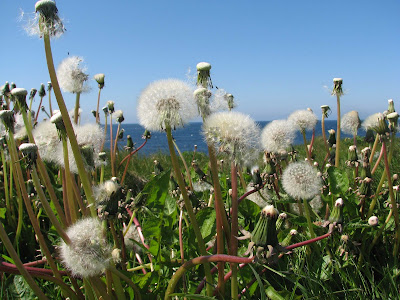 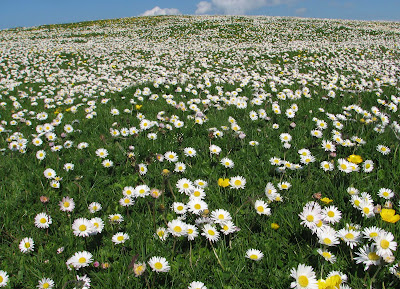 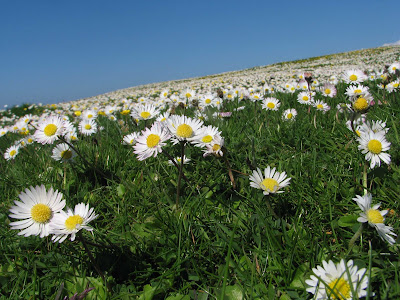 Rather a lot of daises 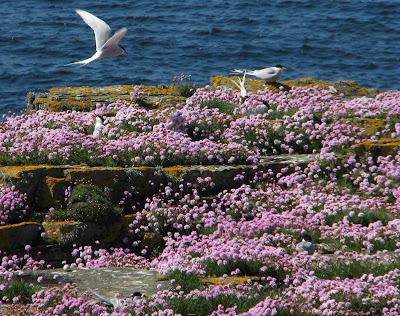 Got up not very early after an excellent do at the nearby Harray Community Centre last night, The Shee and The New Rope String Band being especially recommended and headed off to Birsay. There was nothing evident in the gardens but wadering came up trumps with an immaculate full summer plumage Curlew Sandpiper. Further observation found at least 15 Sanderling, two of which were in full summer plumage. Other notables were Sand Martins collecting nesting material and a Shelduck pair with seven chicks.

Back home an enforced cycle ride refound the Cuckoo and various moth caterpillars in the ling (plenty for the Cuckoo to eat then). The Shunan was full of water after last night's torrential rain so just a few Dunlin and little else to report. 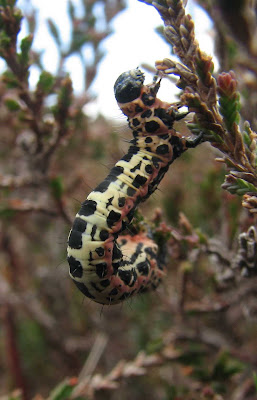 Species ...? Magpie Moth??
Then back to Birsay for a look at the Arctic Tern colony, 49 sitting birds at least, a count of the Grey Seals, 43 hauled out with more in the water. A look for the Curlew Sand was unsuccessful, it was low water, although the Sanderling were still easy to see and another wader ??? disappeared into the distance.
Posted by Alastair at 7:16 pm 2 comments: 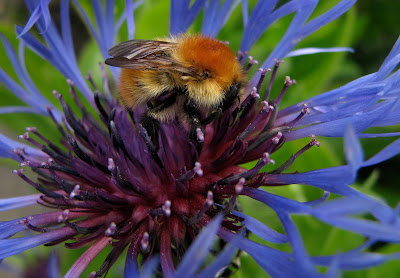 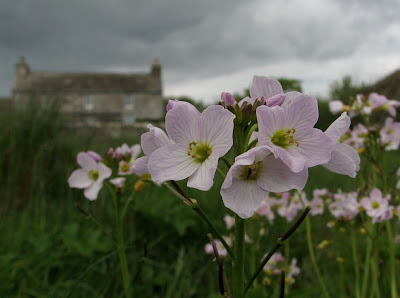 Lady's Smock in the garden 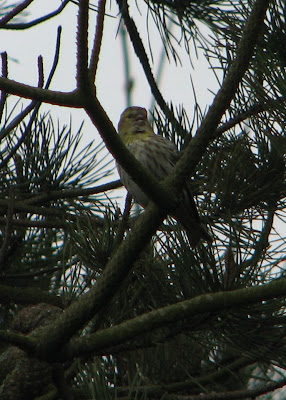 Elected not to go chasing the Red-rumped Swallow or the Golden Oriole at Costa and hunted locally. I did have a wander down to the Mill Dam of Rango but couldn't find the crane despite a fair old search.

Back at the ranch there were at least three Siskin, I suspect I'm seeing the same birds which are hanging around somewhere locally. Dunlin and Ringed Plovers were still on the Shunan and a male Hen Harrier scared the local Starlings into their usual panic. Pied Wagtails and Blackbirds are still feeding young in the nest and that's aboot it.
Posted by Alastair at 6:18 pm No comments:

Had to go Soooth for a family event and so dipped on the Cranes, one possibly flew past the house :-( thus the lack of recent posts. However, reports of 48 Dunlin were not exaggerated, I counted 47 yesterday and there are possibly more than that this evening. Yesterday there were at least 8 Ringed Plover as well but today I could only manage 5. However, a Greenshank was repeatedly heard but not seen and other visitors today to the Shunan included a superb pale phase Arctic Skua and a Bonxie this evening.

Star bird of the moment is the Cuckoo that is calling from behind the house and audible from the garden and (just) from the Shunan. Louise found this on Monday morning and I caught up with it this evening.

I had to work late today so didn't go for the R-r Swallow, not sure I will as I'd much rather find something here, B-b Sand will be mine soon, surely...
Posted by Alastair at 10:31 pm 1 comment: 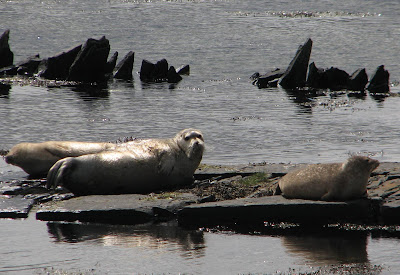 Beardy is the large fella in the middle
I finally caught up with the Bearded Seal. Deciding to look on the slip as I returned from the airport with visitors, who were equally impressed with the curly whiskered one.

The airport trip also allowed me to look for the Dotterel but they were sadly absent.

Back home the same visitors found Whitethroat in the garden whilst I was making tea, I rushed out to see it flit through the gateway into the neighbour's where it proceeded to sing and generally show off; nice one NC. 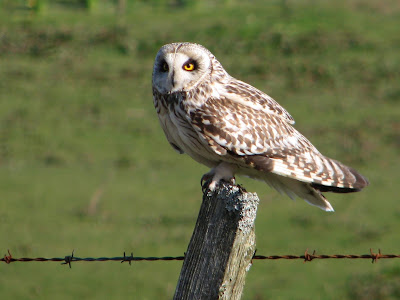 The Short-eared Owl was seen as I returned from doing a farm survey this morning. Also over the moors displaying were two very nice dark phase Arctic Skuas which swooped around the car. 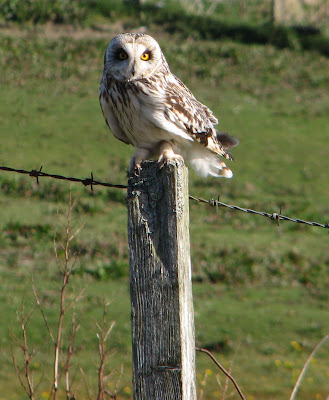 A Hen Harrier hunting around our neighbouring barns this morning (a ringtail) and Red-throated Diver made the "in the garden" list by flying right over the house this morning.

A trip to Birsay found a summer plumaged Sanderling on the beach with about 25 Dunlin but little else.

A Siskin in the garden this evening.
Posted by Alastair at 9:37 pm No comments:

No birding, well not much

Windy and cold, yuk. Drove past Takerness just after the Dotterel were found but just before Julian managed to get the news out. A bit of a search around Deerness yielded only Common Tern for the year list.

Bog all in the garden or on The Shunan either.
Posted by Alastair at 8:38 pm No comments:

Yesterday, Arctic Skua flew past the house as I was eating breakfast; another was on the Shunan around lunchtime.

Ringtail Hen Harrier flew through the garden a.m. Then three Siskin, a male and two f appeared around the feeders, the male similar to last weeks. A Goldfinch appeared on the feeders midday and scoffed Nyger until late afternoon. 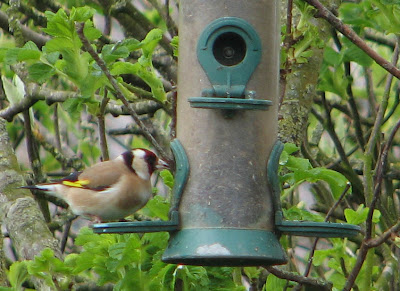 Added to the garden list were Wheatear and at long, long last Ringed Plover.

A Dunlin was on The Shunan a.m. Arctic Terns were on Bosquoy a.m. and seen on Harray. A Red-throated Diver flew along the Harray shore too.
Posted by Alastair at 12:14 am 2 comments:

On The Shunan this evening were two Ringed Plovers and two Common Sandpipers. One of the Ringed Plovers is quite interesting, small, not much orange in the bill, thin black band on the breast, I had to give it a grilling as I thought originally it was going to be LRP, eventually it flew and revealed itself. Both RPs flew to the island so I drove up the track with the expectation of adding them to the "from the garden" list but by the time I got there they'd hid back in the corner I expect, couldn't see them anyway. I dipped on Sand Martin this morning as well as one flew through The Shunan whilst I was down there, still needed for the "from the garden" list. There was a new Brambling under the feeders.
Posted by Alastair at 9:15 pm No comments:

We walked from Marwick Bay to Birsay today, brilliant sunny day with an icy northerly wind. Of course the subtext to this walk was to count White Wagtails but of that later.

The seabird cliffs at Marwick Head are a real spectacle. You get warmed up to this by the constant stream of Kittiwakes to-ing and fro-ing from the Marwick Bay pond, the fro-ing with huge clumps of weed in their bills. The spectacle of thousands of Guillemots on their ledges at The Head never ceases to amaze. Today though we were distracted by the brutality of the natural world.

A small group of about 20 Guillemots were on an open flat piece of rock, low on the cliff. A Bonxie was very interested in this group and soon enough another joined it. The Guillemots were clearly bothered by the Bonxie and stabbed at it when it ventured too close, the Bonxie in its turn was wary enough of the dagger like Guillemot bills. Eventually though the Bonxie launched itself at a guillemot and managed to get on its back and peck at it, most of the Guillemot's cousins retreated at this point and at that moment the other Bonxie flung itself into the fray and grabbed the prize, a bright blue guillemot egg. Immediately Bonxie number one let go and the two birds enjoyed the egg contents.

Once the egg had been devoured one of the Bonxies went back to eyeing up the Guillemots again. A Herring Gull arrived and ate the little egg left by the Bonxies and then retreated and a Great Black-backed Gull arrived and stood near to the Bonxie. At this point Bonxie number two disappeared and Bonxie number one had a scrap with the Geeb. All settled down to Bonxie eyeing up Guillemots, Geeb eyeing up Bonxie and Guillemots and Herring Gull watching from a distance. The Bonxie had a couple of goes at the Guillemots in a half-hearted sort of a way but then went for one isolated one, the Guillemot put up a good show and the Bonxie was being fended off but the egg was open and in nipped the Geeb and broke it but the Guillemot / Bonxie battle was vigorous and the Geeb retreated, another egg rolled free. Then the Bonxie backed off and the Guillemots went back to sitting, one now beside a broken egg.

Later we saw a Raven with a Guillemot egg in its bill as it flew to a field to devour its snack in peace. 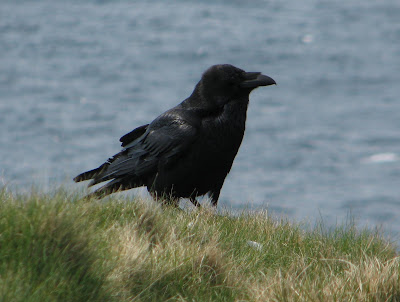 White Wags today - 18 at Marwick Bay, one Pied; one Pied at Marwick Head; 24 White on the Links beach at Birsay but just 12 on the west beach at Birsay, although I didn't have time to count this quite as thoroughly.

Back at home one Siskin today and a Whimbrel on the Shunan that I couldn't see from the garden. Yesterday's Dunlin was still present in the morning.
Posted by Alastair at 9:11 pm No comments: 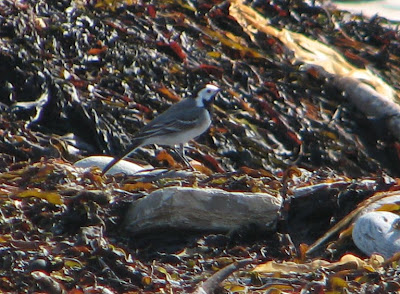 White Wagtail
The beaches at Birsay were covered in alba wagtails this afternoon and almost all of them were M.a.alba. I counted 53; 21 on the bay beach north of the burn and the rest on the links beach. I only saw three or maybe four yarrellii. These are amazing numbers. Interestingly they all called like yarrellii and I didn't hear the Grey Wag like call that I've sometimes heard from this form. At least three Whimbrel over whilst we were there and 5 or 6 Wheatear on the Links beach. 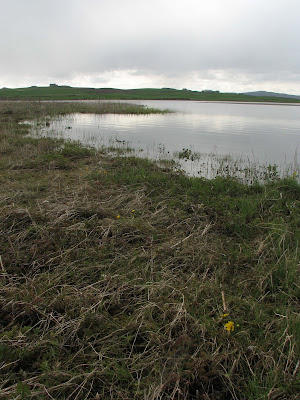 Loch of Bosquoy
Earlier in the day Arctic Tern was added to the "from the garden" list courtesy of three then six on Loch of Bosquoy. A wader seen briefly flying between The Shunan and eventually landing around Bosquoy may well have been a Pec but although I saw it well it was a distant and fairly brief view so best forgotten. I went down to Bosquoy to look for it but to no avail although did count the Tufted properly 386.

In the garden were a pair of Siskin and a flock of what I think were Pink-feet stormed through at tree top level, 35 of them, before gaining height as they headed north west, presumably they were dodging a Peregrine.

At the end of the day a summer plumaged Dunlin was on The Shunan and added to the list.

Moth trapping last night produced but one moth - Hebrew Character, something must have gone wrong surely, although it was cold.
Posted by Alastair at 11:25 pm No comments:

House Martin was with Swallows over Bosquoy this morning, just the one. Much staring into the distance from the garden produced an excellent Merlin and a superb male Hen Harrier that went hunting in a back garden across the way. All the usual ducks were present with Tufted increasing to 368 on Bosquoy. Over by the mill on Harray loch side the suspected Ringed Plover showed again but I just couldn't nail it, a bit too distant, no doubt it will give itself up eventually. Linnets continue to show every time I step outside the gate, so uncountable for the competition.

However, effort was rewarded early evening as whilst trying to id the duck with chicks on Bosquoy a Short-eared Owl flew in to view and showed nicely by The Shunan. A moment later a look back for the duck and two Common Sandpipers flew along the the Bosquoy banks, nice.

A male Chaffinch was in the garden.

The moth trap is running, a bit chilly but overcast so I'm hopeful. Id seems to be the problem here as well, lets see what the morn brings.
Posted by Alastair at 9:22 pm No comments: