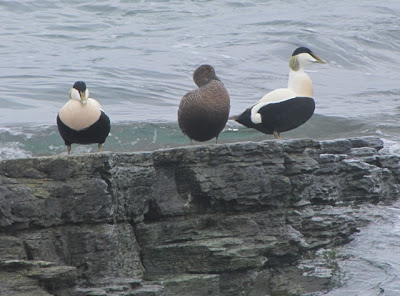 Annoyingly I seem to have lost my notebook last weekend. Fortunately most of the data will be in a spreadsheet, on this blog or in BirdTrack but I'm sure there'll be the odd thing that I've not transfered elsewhere. My last chance was the Birsay cafe but it wasn't there. EBay to the rescue and I've managed to locate a source of my favourite kind, I used to buy them in the newsagents in Filey. They're rather cheaper on eBay. A6 spiral bound artists sketch books. The spiral binding means I can keep a pen handy and the covers on these are pretty resilient.

Wader numbers are now starting to build up with a flock of 12 Dunlin arriving on Thursday to increase numbers on The Shunan to 18. There was a Black-tailed Godwit yesterday and today the expected Ringed Plovers with a flock of 6. The male Hen Harrier again floated through the garden.

Rather surprisingly a Tree Sparrow appeared in the garden again on Wednesday. I popped home for lunch following a training course in Kirkwall and one was feeding with House Sparrows under the feeders.

The weather wasn't great today. I mooched around at Birsay for a bit and spent too long looking for a Bonaparte's Gull amongst all the Black-headed Gulls feeding along the shore. There were a couple of hundred gulls, mostly Black-headed but a few Common and Herring as well. I think a Bony' would be quite hard to pick out in the circumstances. I spent a long time scrutinising a small first summer Bl-hG. The paddling method of feeding, rather storm-petrel like, is interesting I've taken a bit of video, I'll have to upload it later. 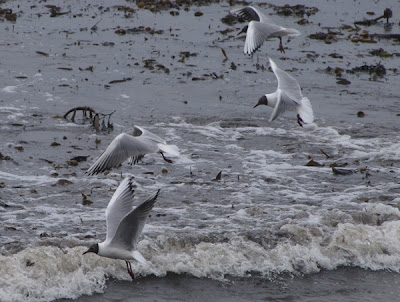 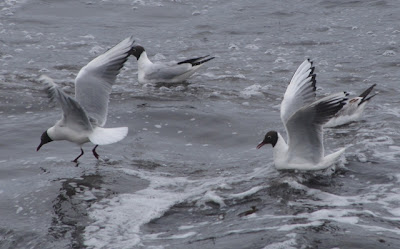 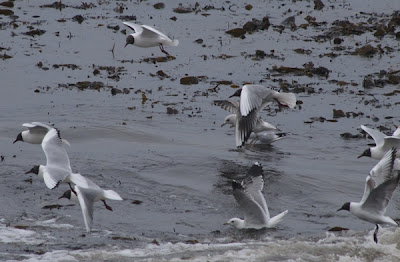 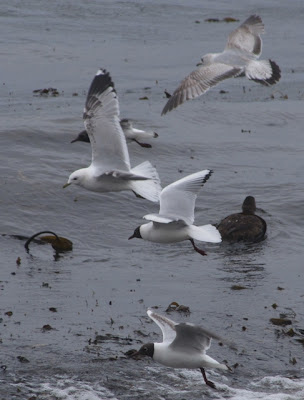 Test your skills - age and name these gulls
After a while I went to Skaill where there was still a Whooper Swan, a Goldeneye and a drake Scaup. I think the Whooper Swan has decided to stay, it was seen on the sea the other day apparently, perhaps not well enough to make the journey north.

Well enjoyed The Burns Unit on Jools last night. The Folk Festival begins on Thursday and I have tickets for a couple of dos. Also we have Euan Robertson, Gary Innes and Martin O'Neill playing at work which should be a bit of a treat. As well as being a demon accordian player Gary is also captain of Scotland's shinty team... hopefully he'll be one piece when he plays for us... Some of this stuff is now in the side panel (or will be soon).
Posted by Alastair at 10:11 pm