Funny this birding lark. You go weeks and weeks flogging away, searching the same places and the rewards are a Curlew Sand or a Pom then everything changes and you find a decent bird every time you go out.

I had a brief wander around the garden this afternoon, I didn't have much time as I had Dad stuff to do and the offspring were impatient. But it was still and there were birds. A Chaffinch, then three, two Wrens, six or seven Blackbirds, 2 Robins at least, a Reed Bunting. Thought I heard a Goldcrest which would be a garden tick. Then, there in front of me was a garden tick, a Barred Warbler. I don't find many passerines and this is a species I've not found before. Delight, especially as it gave cracking views whilst it fed in the soft afternoon light in the Sycamores. Didn't cross the wall line into our garden but a "from the garden" tick nonetheless. The camera was in the kitchen of course, and after I'd ran and got it all I managed was a blur.
Posted by Alastair at 11:40 pm No comments:

This weekend had been booked for a fortnight as my previous attempt to get to North Ron ahd been scuppered by fog which prevented the plane from flying.

DE and I arrived on the six o'clock plane and were immediately whisked to the north end of the island where a number of rarities were known to lurk. Most things had gone to roost but PB got us on to the Short-toed Lark which we saw adequately in the failing light.

The next morning we headed again for the north end after breakfast. There was a stiff southerly breeze and sheltering behind the dykes was required in order to keep optics steady. Having tried various view points as we scanned for pipits and wagtails a Citrine Wag called very loudly in my ear and landed on the dyke beside me. I went for the bins not the camera and excellent views were obtained, but not a picture (the below is the best I could manage later on). 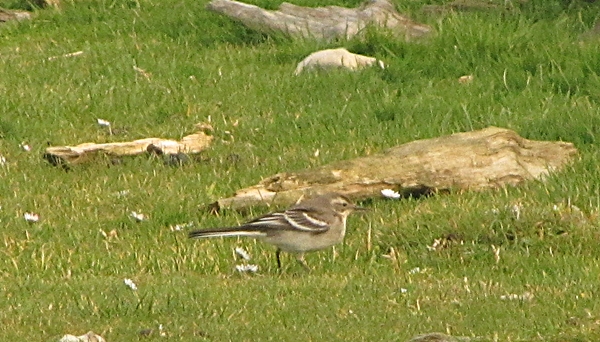 
Whilst scanning the available pipits and other wagtails a small wader was scoped. A completely unexpected Buff-breasted Sand which performed superbly for the next two hours or so before disappearing. 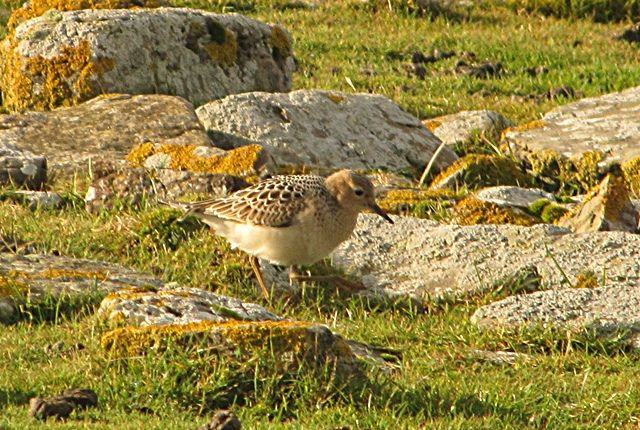 Buff-breasted Sandpiper, a new find for me 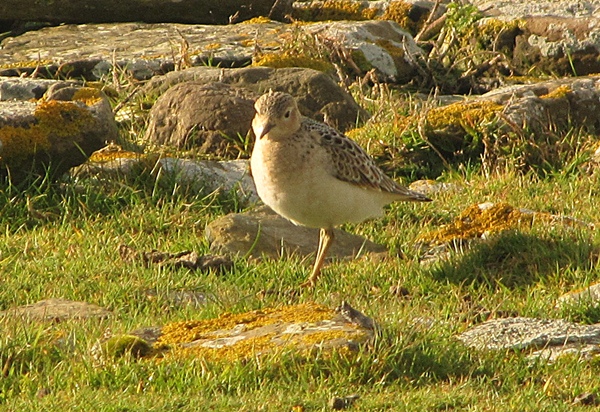 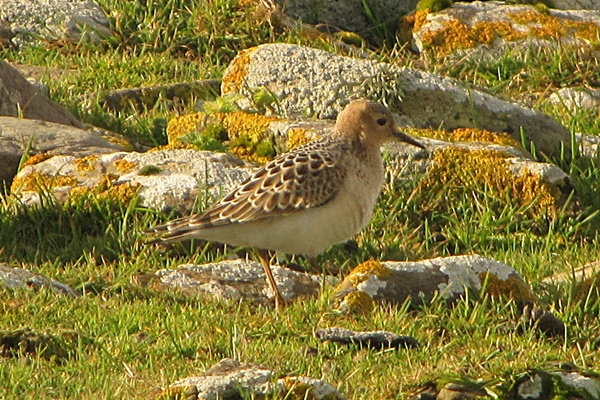 The business of the day was to find the Buff-bellied Pipit which was soon seen briefly before it disappeared. This is a species I have never really got to grips with either in the field or via photos so I was pleased to have seen it but disappointed I hadn't got the sort of views which would have given me a solid tick.

A couple of hours failed to sort the pipit out until PB (the other one) appeared and showed us the bird. I still wasn't entirely happy with the views I was getting, mostly due to the bright sunlight which I think was making the subtlty of the plumage colours hard to pick out. In the end it took me until about two in the afternoon of pacing around the north end to finally get the views I was looking for and to fully understand the identification. The clincher was hearing the call as I flushed the bird after taking a large number of pics. 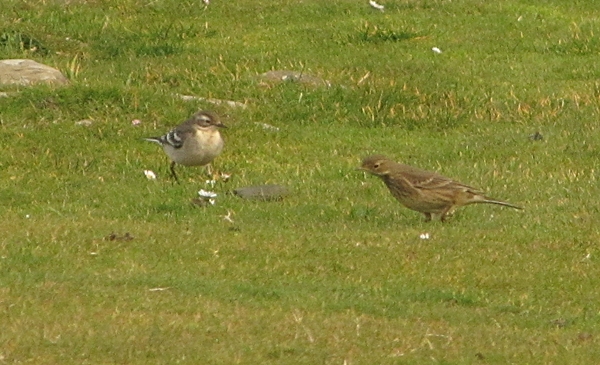 Citrine Wagtail and Buff-bellied Pipit in the same frame... nice 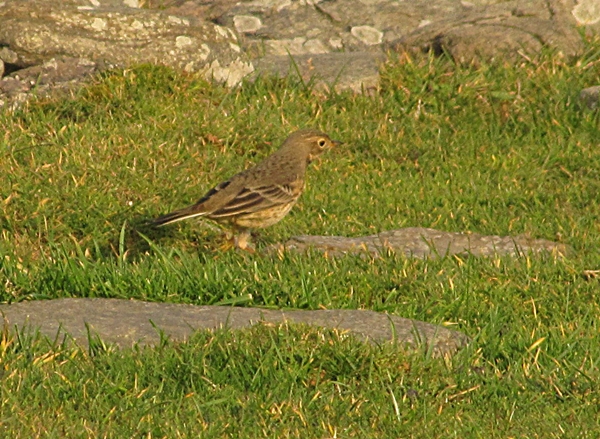 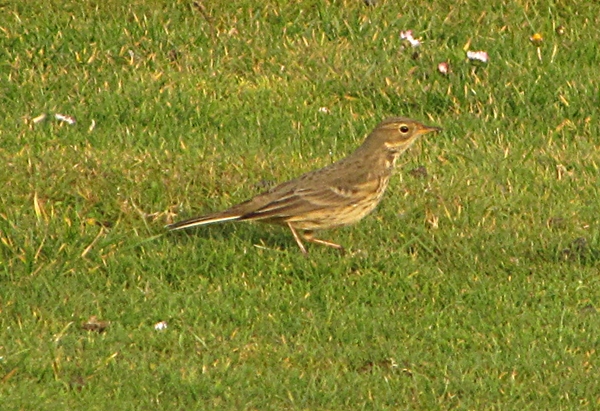 During this whole performance various other things were found including a large flock of Snow Buntings, 14 Sooty Shearwaters during a half hour look at the sea, and two Lapland Buntings.

A celebratory meal was called for in the new lighthouse cafe. Unbeknown to me DE who had returned earlier  to the Obs with the hunger of a starved horse had not known about this rather fine hostelry and was not a little peeved to hear of its delights after an hour or so's tramp back to the Obs. He did however, manage Yelow-browed and glimpses of Grotfinch on the way.

Managing to get a lift most of the way back down the island after an especially uneventful seawatch I spent the late afternoon hunting unsuccessfully for the American Golden Plove, found late in the morning, which had hidden itself away in long grass and hundred's of Goldies. 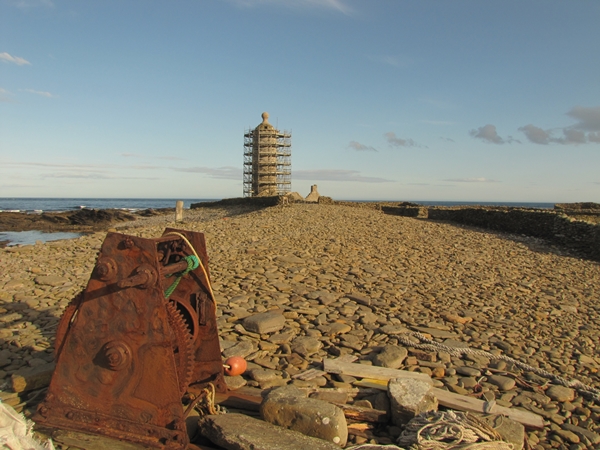 The next day I was out and hunting around the Holland House gardens from quite early on. Plenty of birds called including two Yellow-broweds, one of which I glimpsed, innumerable Blackcaps, Lesser Whitethroat and three Goldcrests but I failed to find anything of more interest.
After breakfast things were only slightly better with a glimpse of a flying Barred Warbler. However, perseverence was required and DE and I headed down to Hooking. We counted waders and generally enjoyed a pleasant morning's birding when DE noticed a harrier over the loch. For some reason (I see Hen Harrier nearly every day at home, it's often a garden bird) I decided to get the skaffolding out and set up the scope, with the usual cursing as the legs stuck etc. Eventually I managed to view a rapidly retreating distant harrier whilst looking into harsh light. The bird banked briefly and I was sure I could see deep, rusty brown, uniform underparts. I then watched with a bit more diligence and noted that the bird was flying with subtly more rapid wing beat and the wings looked long and pointed. However, within a second or so the bird had disappeared from view. "That'll be a harrier sp." I said to DE as we started scanning the links for waders and counting Ringed Plover. A few minutes later DE shouted up "Harrier!" and I saw what was clearly either a Monty or a Pallid pass almost over our heads, "It's a Pallid!" shouted DE. In the struggle to decide whether to photograph it or look carefully all I got was the colour and the flight again, although I did see a collar that looked much like the markings on photographs of juvenile Pallid Harriers that I've recently been examining (ever hopeful). A brief discussion revealled that we hadn't got all the features, I was concerned at this point that BBRC would chuck it out. I called up the troops. We scanned down the links and after 15 minutes or so I saw the bird distantly to the north. By this time troops had indeed arrived. We walked down to join most of the observatory who had gathered a few hundred metres down the way. As we arrived everyone decided to get back in the vehicle and drive north. As usual I decided to do something different and stay put. A few minutes later I was treated to excellent views as an agile, twisting, hunting Pallid Harrier came south again showing all its best features, excellent! 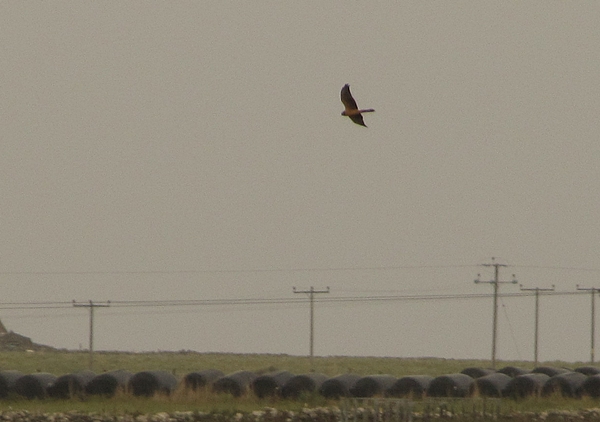 I eventually moved to the south of Hooking where I got very good views, not great photos but you get the jist.

I would have got better pictures if a wader which flew over with Snipe hadn't confused and distracted me. Looking very dark and unmarked into the light and I being in a bit of a heightened state, to be honest I jumped to the wrong conclusion. Bit of a shame really as I don't mind finding a Pec, which is what it was, and which on a calmer day I would most probably have got right, even on not so good flight views. However, everyone was very good tempered about being whistled up for what is not an especially uncommon bird here, when it was eventually heard to call and seen again in flight, so it goes. 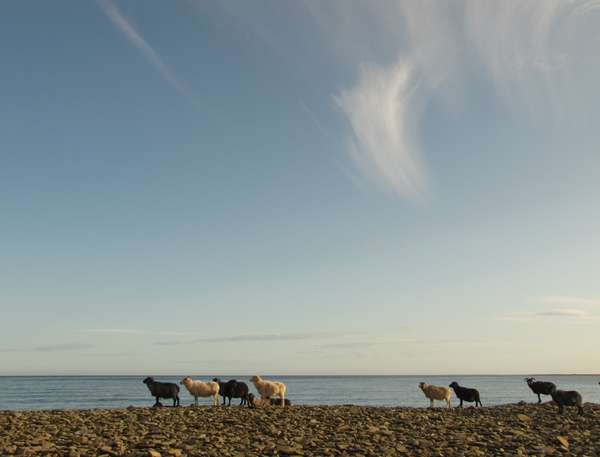 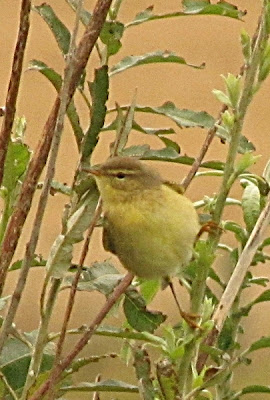 6.30 off and down to South Ron collecting JB from Toab on the way. A quick stop at Quoyangry was nearly a quick heart attack until reason cut in and the three waders in the field were identified as Grey Plover. 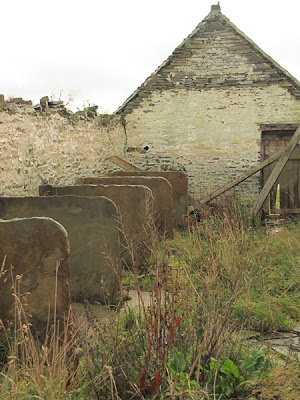 Down at Burwick small warblery jobs were a jumping and a jiving and we managed to see thre Blackcaps, two (at least) Garden Warblers, two Willow Warblers and a LesserWhitethroat in the same bush. A couple of exciting moments with an unidentified thing that flew in and flew off (Nightingale!!!!!!!???) and a maybe elusive Iccy but it was good enough without them. 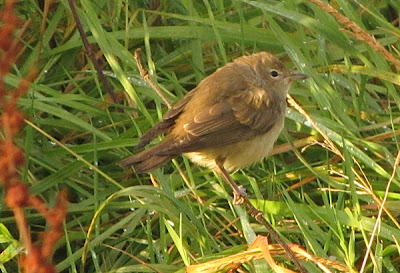 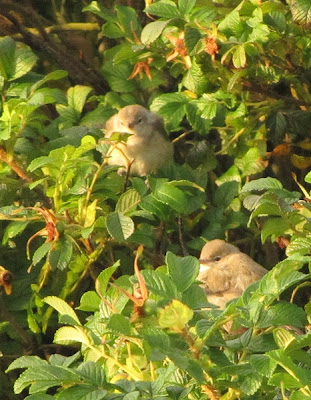 To Brough Farm where last year the BBS had held a brief court, the fields were full of waders including 49 Ruff and a couple of Curlew Sands amongst many Goldies and a variety of commoner waders.

Back to Burwick and then to the Graemston Loch gardens which produced a very vocal Yellow-browed and a Spot Fly.

A quick stop at Hestily then on to Windwick where there were a few Sylvias in the bushes but we only nailed Garden and Blackcap.

At Quoyangry again where there were now four Grey Plovers but we flushed the calidrid flock, although one Curlew Sand was ided in flight.

A blank at Cara but DS put us on to the Honeygeo Red-back and sure enough there it was when we got there with Lesserthroat again and WW. 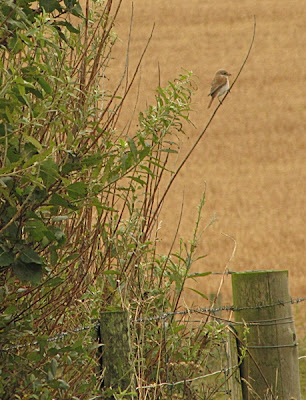 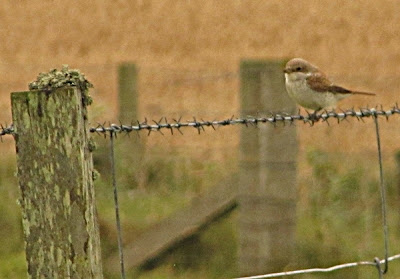 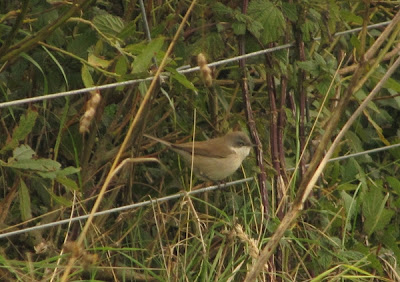 By this point (1.30) house points were in jeopardy so it was time to retire from the field.

Back in Harray the first Chaffinch of the autumn was calling from the garden and the greenfinch flock had returned, approving of the much improved quality of the bird food (a whole bag of sunflower seeds now added).
Posted by Alastair at 10:55 pm 2 comments:

As I was taking the dog out for her before bed pee on Sunday evening a wader flew over and called twice as it went. It wasn't a Goldie but it certainly had that Pluvialis quality. It's taken a bit of research, as I didn't recognise the call, although I had my suspicions, but it is likely that it was an AGP. Unfortunately, because I don't have field experience of this species' call I reckon it's unclaimable. The calls I've listened to (xeno-canto and The Sound Approach) vary rather a lot.

My flight was at 3.15 and that's when the fog came in so it was no trip to North Ronaldsay for me this weekend, darn!

Surprisingly for such a dank, damp day raptors have been a highlight with two Hen Harriers, a Sparrowhawk and a Kestrel around the house and two other Kestrels and a Hen Harrier seen on my various trips to Kirkwall and out to Birsay.

The late afternoon compensatory trip to Birsay produced a few waders on the beach, including a Barwit, a Sanderling and 74 Ringed Plovers. There were very few passerines however, a likely White Wag being the highlight. The only passerine of note today has been the Tree Sparrow, which although a little more elusive, continues to frequent the feeders in the garden on occasion. 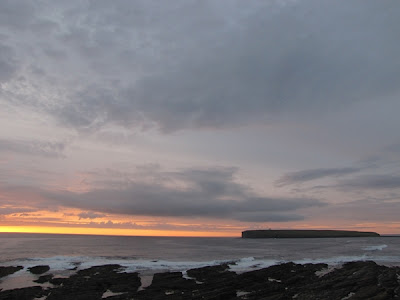 The Brough at dusk (last weekend) 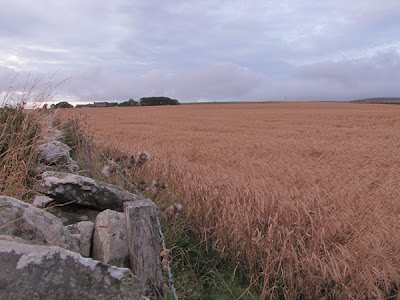 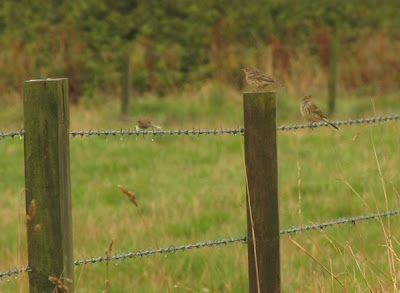 Mepits from the drop last Tuesday 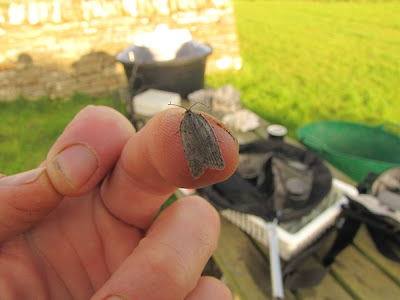 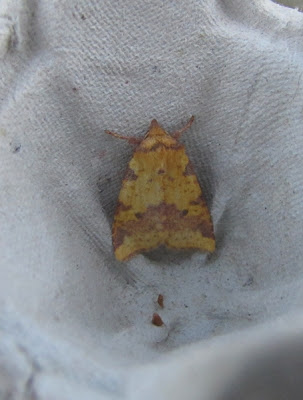