The snow fall of yesterday had frozen this morn. Looking out from the kitchen we're white but its all green the other side of the Harray Loch. 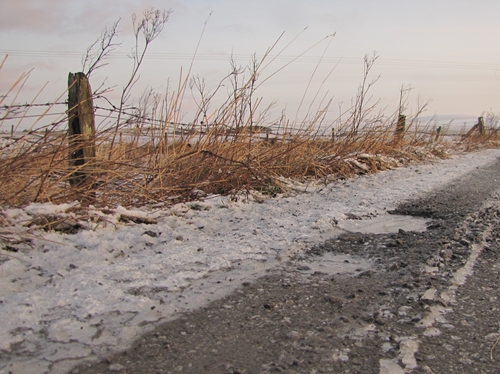 Various jobs to do today but I did find time to go gull hunting. The sea was still mighty at Skaill and Marwick. 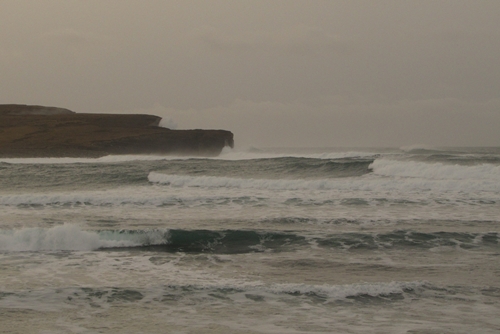 There were two Whoopers by the road at Skara Brae.

I managed to locate two 1st CY Glaucous. The first one was at Marwick and it then followed me down the coast, unless there are two with the same missing secondary, where it found a friend. 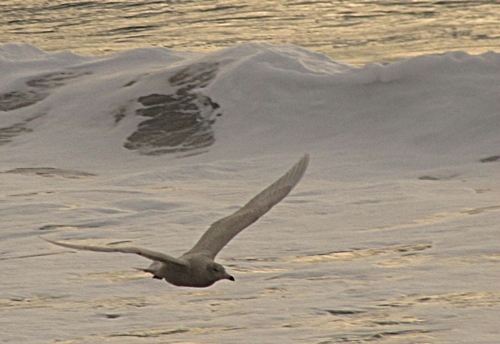 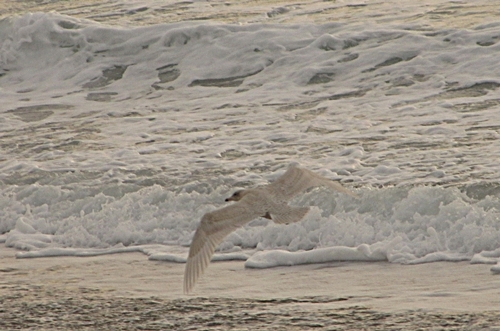 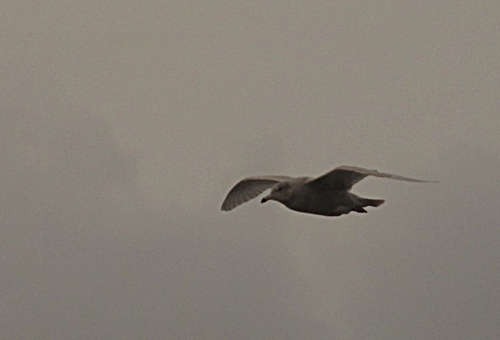 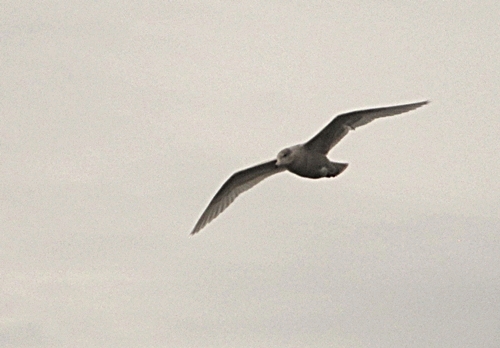 Point of Buckquoy is not a bad seawatch place, a bit low and the Brough does force some birds out but sitting in the car means that concentration is better. In a strong wind it can act like a trap, especially for petrels, although the danger is that birds will cut across the fields behind the car park. 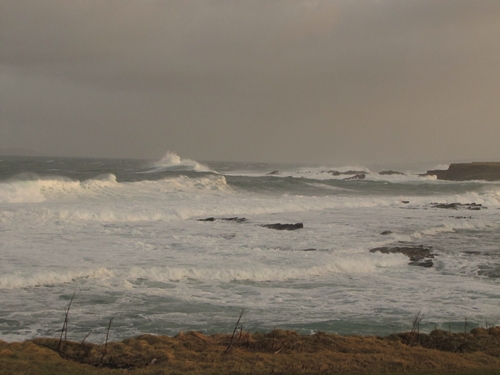 Today the wind was not so high and there were Fulmars and Kitts passing at about 2km + and gulls close in and behind me. It was a toss up, look for the close in Ivory Gull or scan with the scope for the Wanderer. I kind of compromised and was lucky to get on to a mid range Sooty which showed well, bit late mate! The Fulmars were shifting at about 2000+ / hour and there were a good few Kitts. The close in gull passage was predominantly of Common Gulls but there were about 100 GB-bGulls in the hour as well as 60 Herring Gulls, loads will have gone behind me as well. Other bonus birds were one Little Auk and two Blue Fulmars. There was also three Red-throated Divers and a few Eider. Other things included a Grey Plover and Snow Buntings were heard. 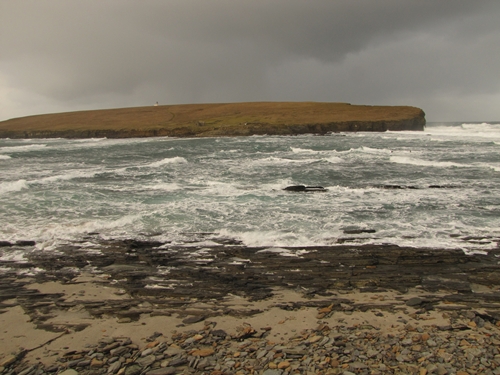 I had a look at Marwick where there were a few gulls. 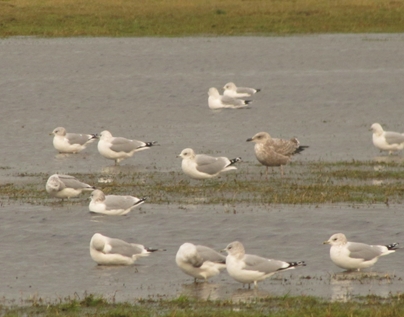 Then on to Skaill where was a nice 1cy Glaucous Gull, loads of waders and gulls and a Merlin. 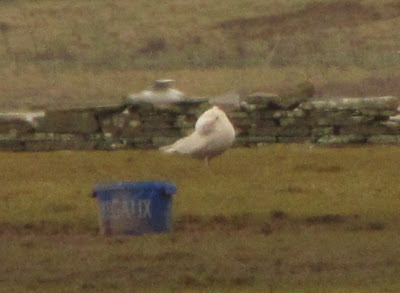 Back at the ranch we had woken to the sound of Whooper Swans. The Tree Sparrow was present, a Grey Heron flew by and a female Hen Harrier was hunting most of the day. Louise found three Shorties between the stables and home. There are still Redwings about and at roost time there were three or four with the Blackbirds (17) and another 15 down at the Shunan. The Greenfinch record was shattered with an epic 47 at the feeders.

Posted by Alastair at 9:05 pm No comments:

Amidst the mighty waves a white-winged gull approached the Brough of Birsay car park from the east this morning. Unfortunately, instead of sailing past 20 metres from my position it cut inland across the fields and headed for Marwick. Subsequent searching failed to reveal it. No doubt it was a 1cy with its rusty tones on upper wing coverts body and tail. At first I thought it looked huge, but it was a predominantly white bird against a grey background and thus bound to look big. The arm and especially the hand were long, the wings looked elegant, slender for a bird of this size, and the flight was graceful. The under body showed no sign of the dark grey tones that a Glaucous Gull might sport. It was too far away to see any detail on the bill, but would the characteristic and distinct Glaucous bill pattern of a 1cy have been discernible at that range (about 600metres or so).

My new found caution with this species pair left me initially to hum and ha. The buffeting of the breeze (ha, ha), the distance and the brevity of the view didn't help but it had to be an Iceland Gull.

We then contemplated a walk and I went around the back of the car to hold the door whilst Louise got the waterproofs out. Open door, Louise flails as waterproofs get out all on their own and head rapidly in a gangly, airwalk towards the ocean. Subsequent good fielding by Louise recovered two pairs and slightly mad wave dodging on the beach below the cliff captured the last unruly legs. 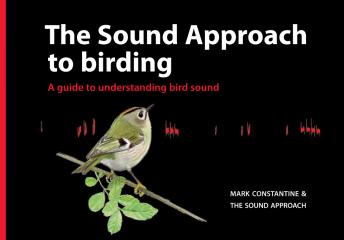 I've slowly been reading The Sound Approach since I borrowed a copy (thanks JB) and then was given it last summer. It took me a while to locate my old CD Walkman, ideal for listening as you read. (No don't try putting all the files on your iPod, totally hopeless - shuffle Floyd, Lupe, Kate, Golden Plover, The Stones, Willow Tit etc.) For Christmas Louise bought me Birding from the Hip. Now I've never been a fan of Birdwatch magazine so I was entirely ignorant of Anthony McGeehan's articles in that publication. This is just such a good read, and listen. The use of the CDs to make a kind of birders' Radio 4 is brilliant. This is the best book about birders and birding, and our obsession's impact on our nearest and dearest that you'll read; highly recommended. 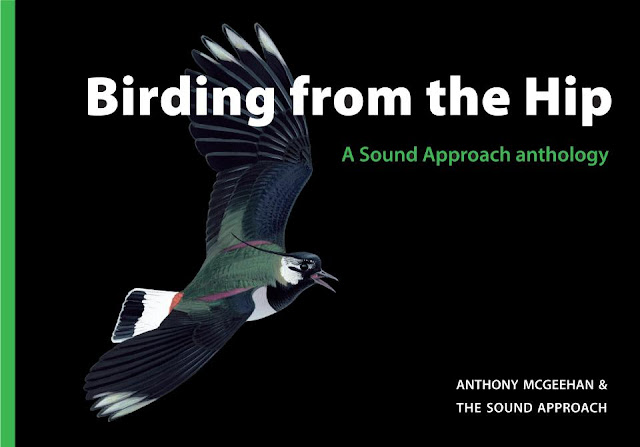 Posted by Alastair at 8:39 pm No comments:

How is it that I'm blogging on such a morn?

Presents are opened, and more of that in a peedie minute. The usual awakening was delayed until six, a bit of a triumph that; having been banned from waking us until seven, offspring delayed the usual rousing until quite a reasonable hour. However, Louise is still in a sleep deprived state as eldest was too excited to sleep until around two or so and insisted on Louise sharing the spare room bed whilst she wriggled, talked etc, etc. Cooking, cooking is pretty much done, yesterday as the south-westerly blew and the rain deluged. So why not birding? 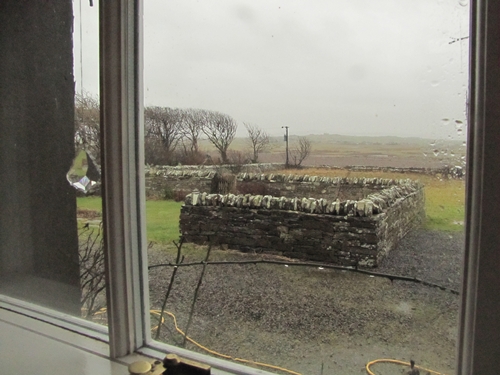 The picture makes it look better than it really is, its barely light at eleven.


And then it blew a hooley. Managed to prevent the garage doors disappearing into the distance, hadn't noticed that the last storm had damaged the hinges a well as the bolt, one is bent and knackered. Anyway emergency repairs done. Tree Sparrow on the feeders, Sparrowhawk under them, but no small body so it must have missed its prey. The breeze has eased a bit now, its possible to walk in the garden rather than just get blown about...

Have a cool Christmas maaaan (play it loud)

Posted by Alastair at 6:28 pm No comments: 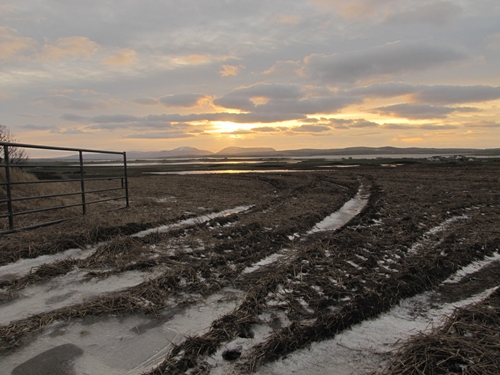 The neeps field next door

Mooched about the garden today, cold and calm, following the storm on Thursday evening. Our only damage was a broken bolt on the garage door which the wind had got behind and forced open, bending the bolt as it went, fortunately I found this soon after it had happened and recovered the door and wedged it shut.

Sorting out, and finding the feeders was a job for this morn. They are all now back in place. 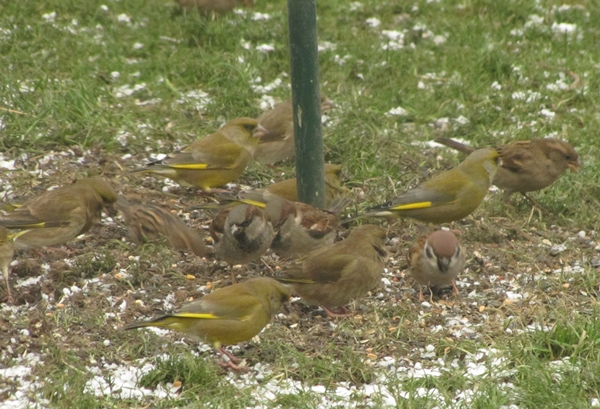 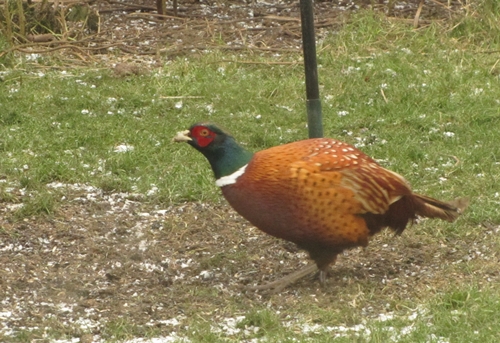 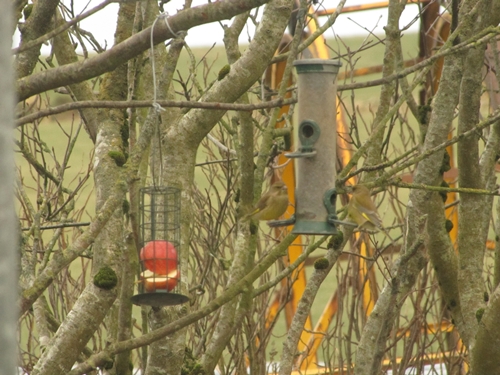 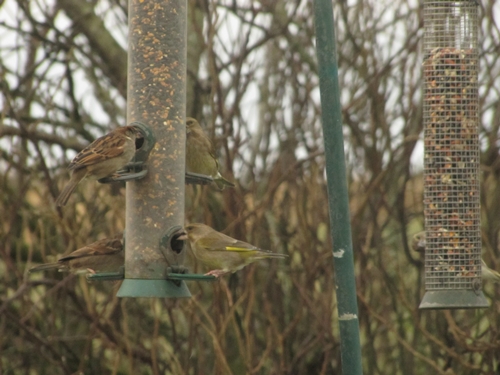 33 Greenfinch is a record I think, 12 Chaffinch is also a high number and there are still fair numbers of Blackbirds about, 18. The Tree Sparrow remains.
Posted by Alastair at 6:12 pm No comments: