A day on Sanday

Taking advantage of the last day of excursion fares I put the car on the Sanday ferry and with a small birding crew we set about seeing if anything was left of yesterday's Yellow-browed fall.

First to Start Point, up in the NE corner to see if, despite the clear night any new birds were in. They weren't but it was still an interesting place to wander around, taking care not to get cut off by the tide of course. 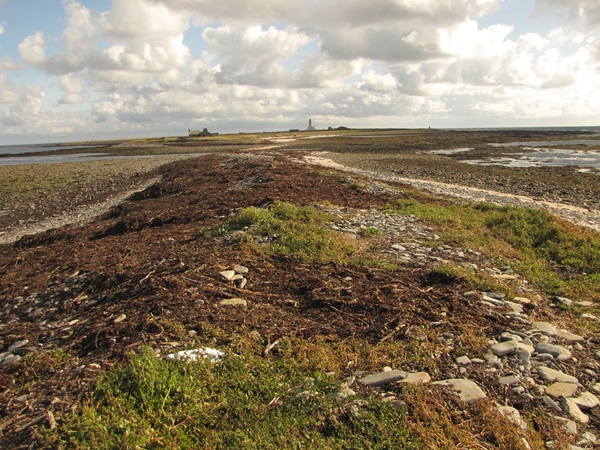 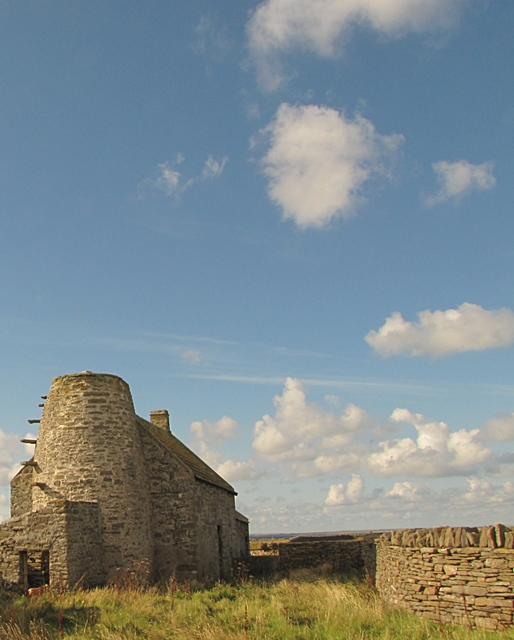 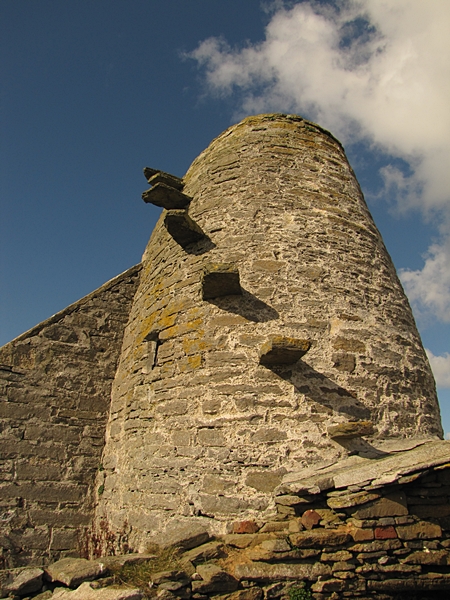 We then had a bit of a tour around the north end of the island in the process locating two Yellow-browed Warblers and failing to nail a likely Grotfinch.

However, a change of plan, a focus on waders, and we were soon searching through the vast flocks of goldies and other waders on Burness. Eventually M said, "What's this?" A group of close waders flew including an interesting smaller one with the goldies, and once we had relocated it nearby it was appropriately identified and photographed - Buff-breasted Sand, very nice. 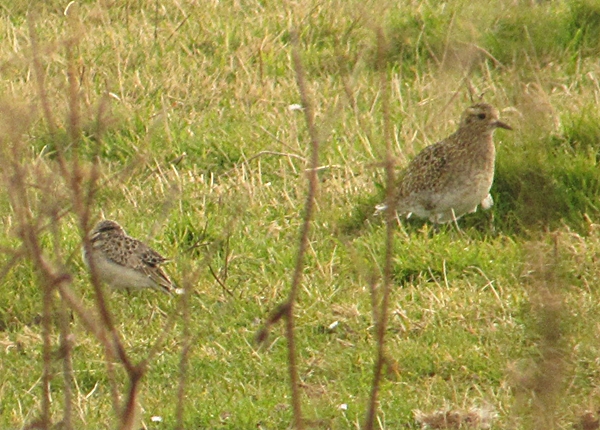 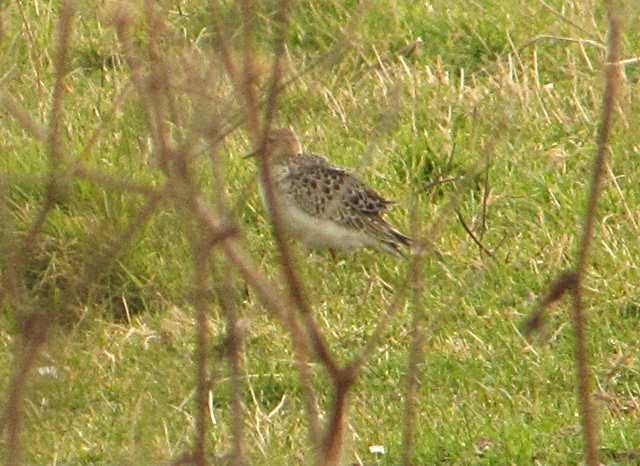 A large cow stood in front of the bird and when it had moved Buffy was gone. We couldn't relocate her and neither could the two carloads of birders who we called up. Subsequently we searched the fields most of the way to the sea. We were needing to dash for the ferry but AL could be relied upon to locate something good, and sure enough he'd got the adult American Golden Plover. Reasonable enough views were obtained before we had to scoot south down the island for the boat and an uneventful, though occasionally bouncy trip home.

Back to the mundane...

Today was a standard Orkney day, drive daughter down the track and pick out a Ruff from the field opposite as we wait in the wind and the rain (inside the car) for her school bus to appear. Into the works car park where a White Wagtail calls and scoots off. Usual work stuff but a quick sally outside late afternoon finds 39 Pinkies heading over the building.

Messing about on t'internet, looking at old blogs and I seem to have missed this bit of genius from the legendary Newton Stringer....

I spend all last weekend on North Ron doing solid birding and find... not much. I take the dog for a walk with the girls during a day I'd barely touched the bins and find a Baird's Sand on The Links beach.

I very nearly blew it as I glanced at the bird initially and almost passed it off as a Dunlin, then it flew and called, ah, that's not a Dunlin.

I spend a fair amount of time checking this beach so it was well exciting to find such a cracking little bird. 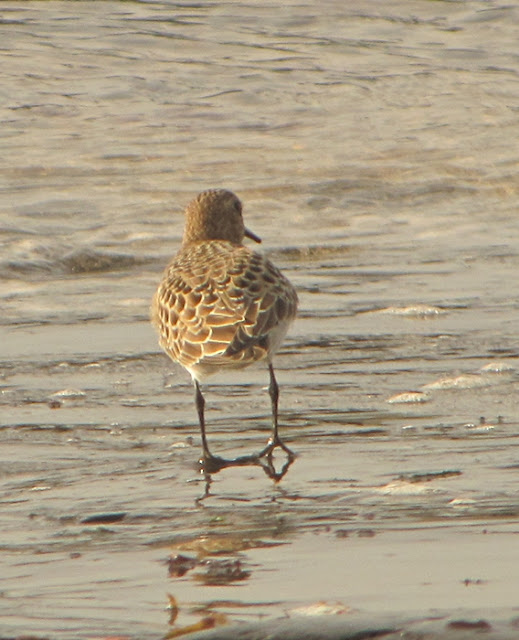 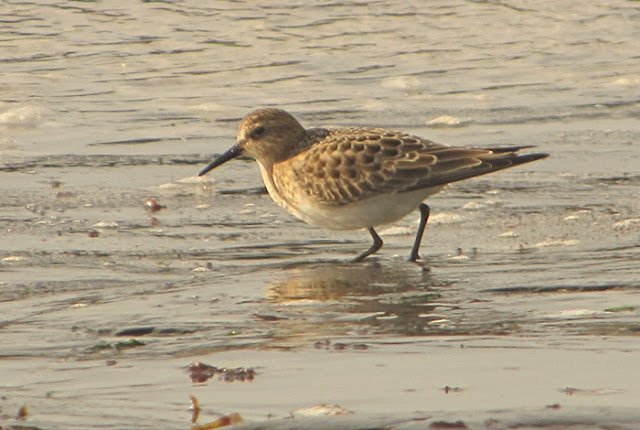 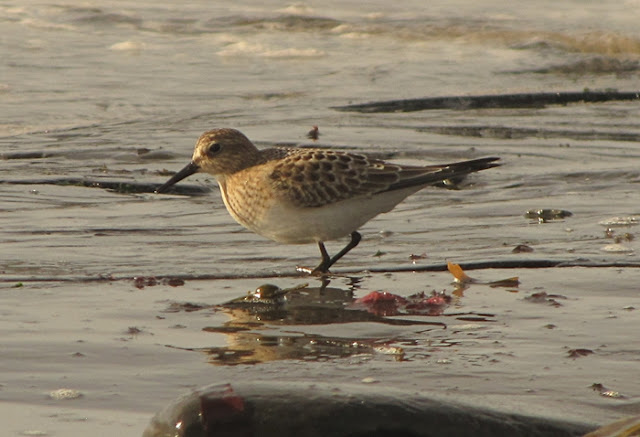 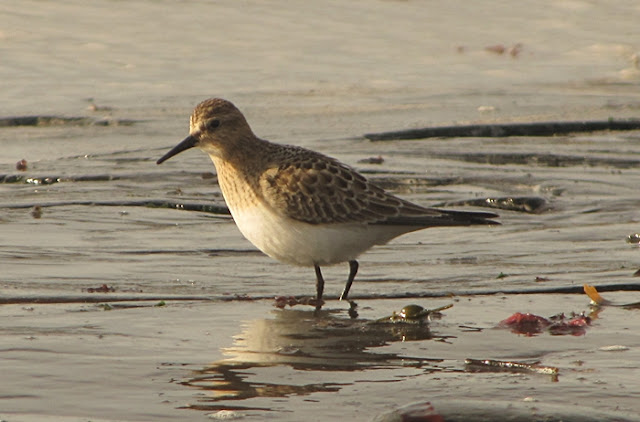 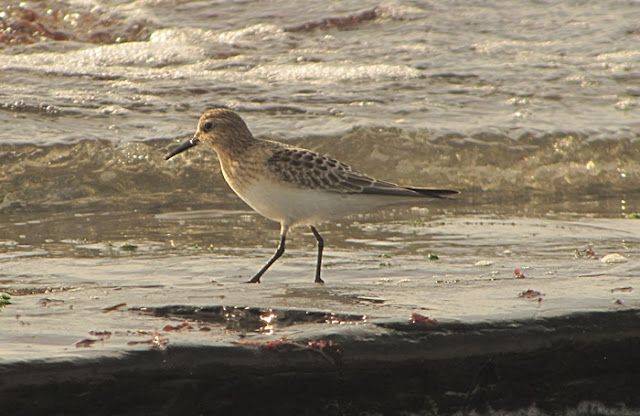 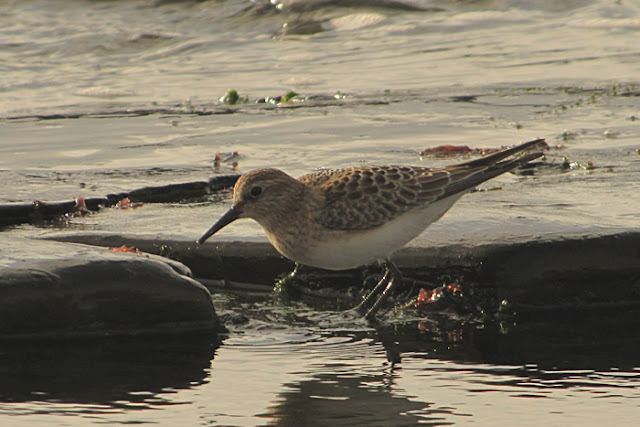 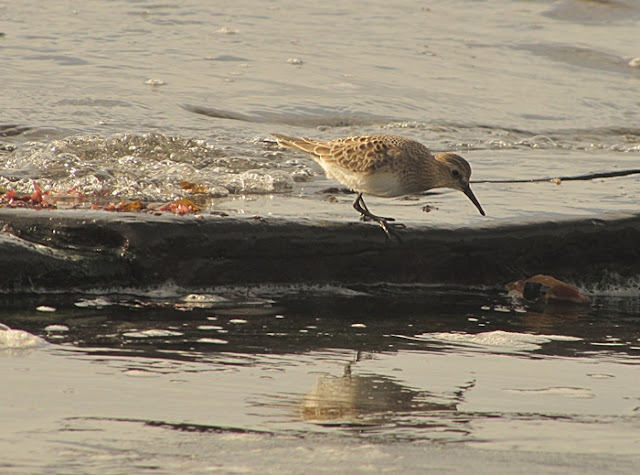 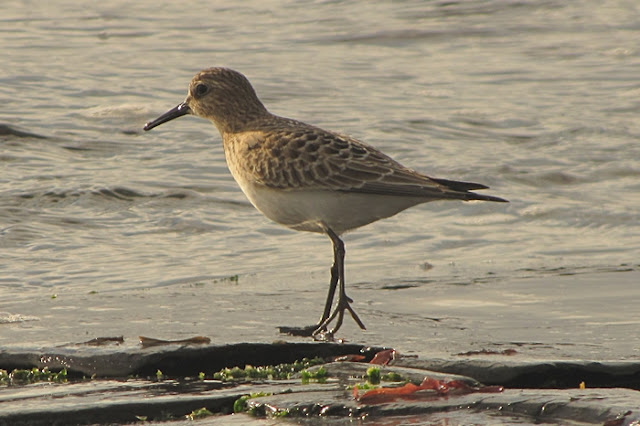 Passing Pt of Buckquoy at 3,000 / hr yesterday morning (average from sample counts) at times the rate was substantially higher than that, my largest sample was 290 in 5 mins. This was yet another attempt to get a decent bird from a seawatch but the wind was with a bit of south in it, certainly no north and maybe its a tad early still for a goodchance of Leach's here (although there have been a couple claimed in recent days).
Whilst on North Ronaldsay at the weekend over 100 Fulmars landed in tall vegetation at Bridesness and were caught for ringing. I went down there the next day under the impression that they had mistakenly gone into the vegetation and was amazed to watch birds deliberately landing in the iris and sedge beds. A good number were down in the vegetation and about 20 others were flying around them, every now and then one of the flying birds would land. Once in this vegetation they could not easily extricate themselves and were flapping around with no chance of flight. This would seem to be rather lemming like behaviour as in time a good number will surely die of starvation. 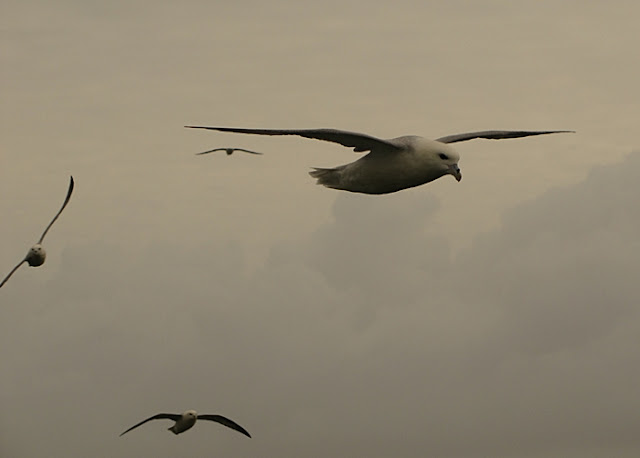 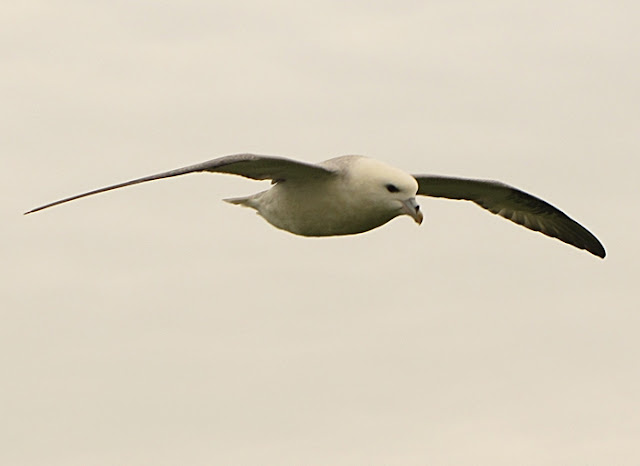 These birds were buzzing over the iris and sedge beds, occasionally landing 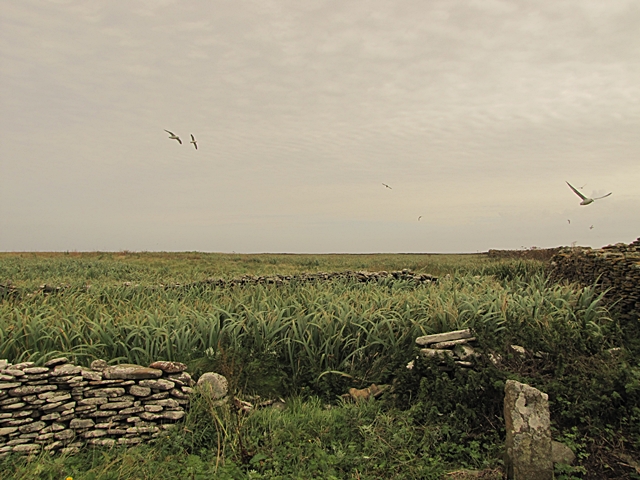 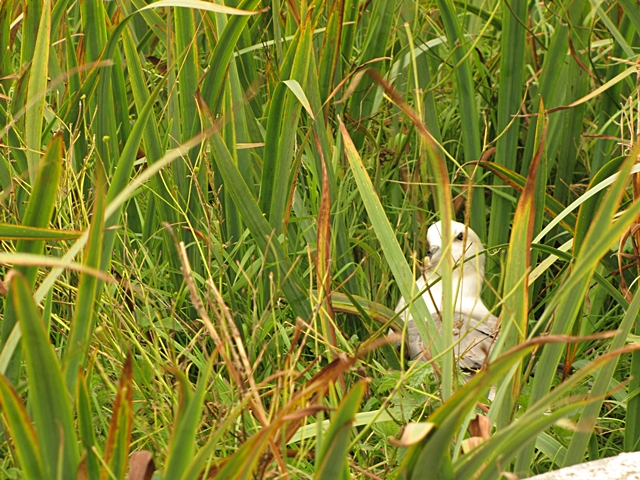 Not easy ground for a Fulmar
By coincidence we were eating this evening when we noticed a Fulmar on the front lawn. Being 7 miles or so from the sea and Fulmar being fairly infrequent here (first tetrad record this year) I was surprised. Having donned old clothes I went out and caught the bird. With there being almost no breeze attempts to launch it into the air met with failure, long glides and crashing back onto the grass. In the end we loaded the fulmar into a cat basket and took it to Pt of Buckquoy where there were plenty of other fulmars and a fair breeze, it flew off strongly once launched into the air. 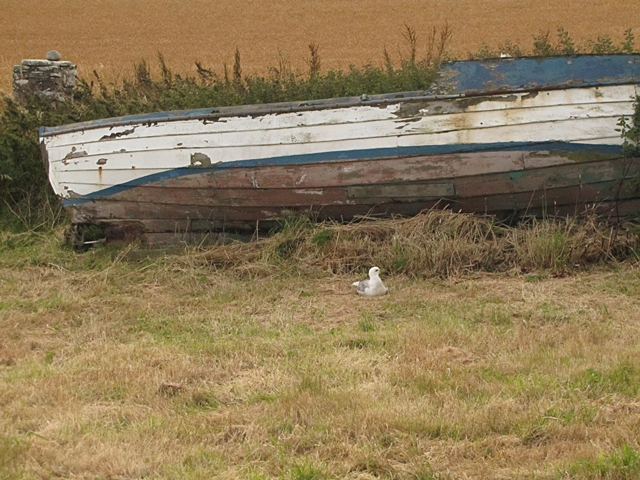 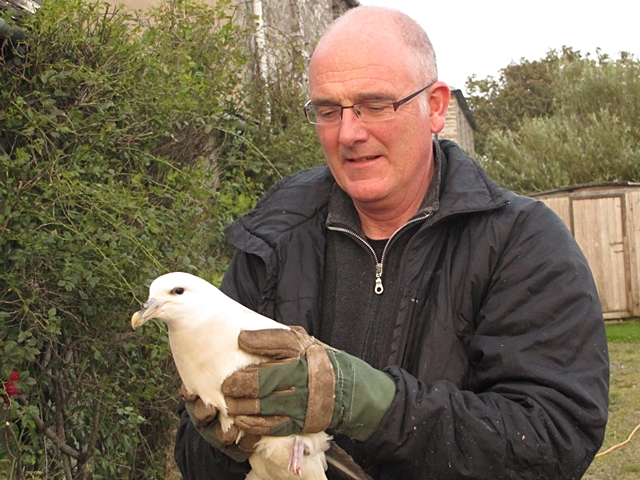 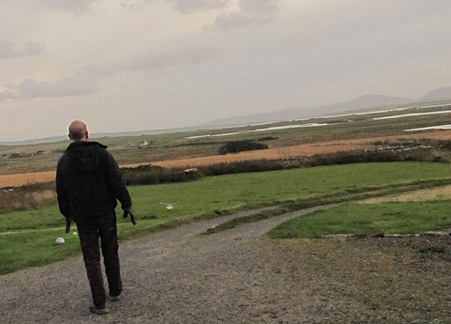 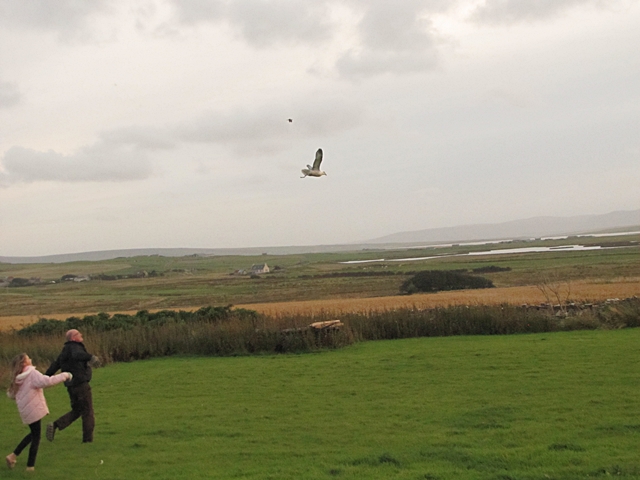 This looks as if it might be successful... but no

I'm interested in this odd behaviour. Of the birds that were retraps or controls amongst the NRon birds I think I'm correct in stating they were all ringed in the last four years so were probably young and inexperienced. Could this be social behaviour, seeking out nest sites? Its hard to think of a reasonable
explanation.

The Shunan is full of water and unsuitable for much, even the Teal and Wigeon have deserted it of late. However, the field across the track to the east is now flooded in places and this has led to up to 17 Blackwits feeding in there. Yesterday there was a Ruff and 11 Redshank; a good spot for a Pec I should think.

The trip to North Ronaldsay was ok, considering the not so good winds. A seawatch produced 18 Sooties and the same number of Manx along with 7 Euro Stormies. There were plenty of the commoner waders moving and I connected with a couple of rather elusive Barred Warblers. I did spend the best part of three hours trying to see a Phyllosc that I'd glimpsed in Holland House gardens, to no avail, I'd fancied finding Arctic Warbler... maybe next time. 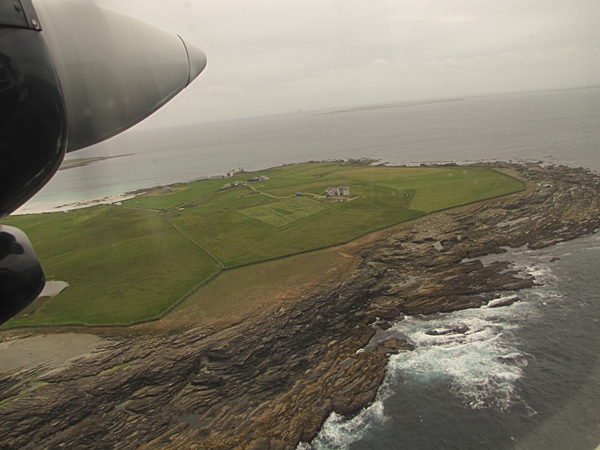