Bit of a blow

Well it blew, and is still blowing but not enough, although it's stronger now, and still getting into the north, maybe it will but maybe..... However, Pt of Buckquoy produced 11 Soots, 50 Manx (that's quite a high total here), 5,240 Fulmar, 14 Bonx, in 2.5 hours this morn. I discovered a new seawatching hazard as well as towards the end of the watch a tourist coach drew up and disgorged its contents into the carpark, and blow me, half of them stood not a few feet from me, between me and the sea. Doh! Slightly bad-tempered badseawatcher decided that enough was enough and fortunately the water was just low enough to allow a wade across to the Brough. Peace. And one more Soot and 9 more Manx, although it took a while to get into the groove as viewing is, maybe better, but higher so finding "the line" is trickier. No migrants on The Brough but watching the seabirds was interesting. The Gannets head up the west side and then on the whole just keep going out, whilst most of the Fulmars turn the corner and head south. I saw one Manx take a left as well.

On the way home I found a smelly friend by the side of the road. it looked as if this Fulmar had hit the fence. It was covered in its own puke which hadn't done it any good but it seemed in generally good nick. An attempt at a launch down at Harray Loch did not go too well though and when it started to sink I decided it would have to come home and join the menagerie. Ellen and I constructed a Fulmar palace in the garden but it has so far refused our best fish cat food. Will try a launch at The Brough tomorrow maybe.

In the afternoon thre were large wheatears at both The Shunan and on the Howaback road, no doubt with these winds of Greenland origin. A Pink-foot continues to hang out with the local greylags and a Kestrel showed a couple of times. 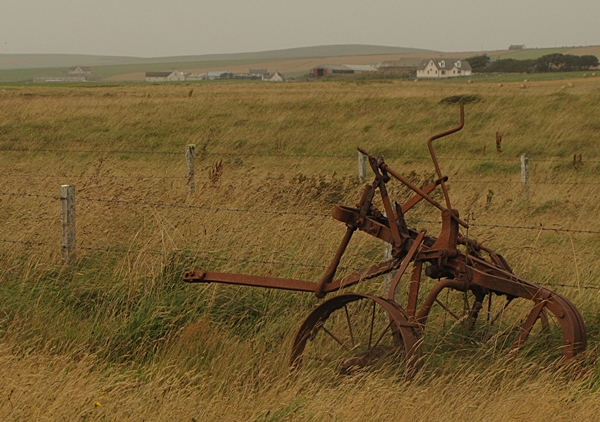 Near Howaback, well not that near. mollie sent me to find the pony's boot that it had shed, a mile or so later.... but I did come across this. 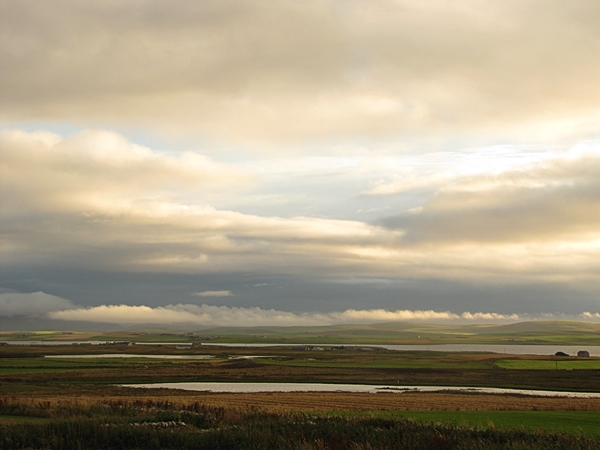 Recent view from the garden, Thursday p.m. I think
Posted by Alastair at 10:23 pm No comments:

Returning from work a stop at The Shunan turned into a more major effort as Blackwits were coming and going continuously with a gathering of at least 42 at one point. Also present 5 Ruff, a Dunlin, two Redshank and probably as many as 60 Snipe. There was also a bit of a puzzle, seen briefly a couple of times in the vegetation of the islands, once with a Ruff and once amongst Snipe and Lapwings what looked like that wind-up toy of a wader - Buff-breasted Sand. Unfortunately I just could not nail it what with all that vegetation, the range, the imperfect light and of course the skulking nature of the quarry. I went back down after tea for another try and saw it again but still failed to pin down the id. Try again another day. Grey Heron again today which is roosting in nextdoor's trees, Robin which has been here a 9 days now, Ellen managed to tick off the Tree Spug for me and a Hen harrier was hunting all the waders.

Posted by Alastair at 9:51 pm No comments:

Another freshwater wader on the beach with a Green Sand calling and eventually alighting briefly on The Links beach before towering high and disappearing south, nice. And another species that I am struggling to recall seeing on a beach before.

Back at the ranch a mid afternoon cup of tea outside was rewarded with a flock of twelve Blackwits drifting in from the east into The Shunan. A male Hen Harrier went through the garden hunting, but that was about it
Posted by Alastair at 10:14 pm 3 comments:

Now that's what I call birding 2

Loads of waders at Palace at the moment, more than I've seen beofre. Dunlin were up to 119 today and Ringed Plover 156. So it wasn't a great surprise to dig out four Curlew Sands this morning, very welcome, especially after a rather uneventful early morning tour of The Brough. Also of note were 15 Snipe hunkered down in the seaweed on the beach. I managed to get back there this afternoon and was well pleased with a smart juvvy Wood Sand that flew in and landed on the beach (I've never seen one on the shore before that I can remember). As I was leaving a Greenshank flew in calling as well. Also there Whimbrel, at least 8.

On The Shunan there were 7 Blackwits, 4 Ruff and a pile of snipe. 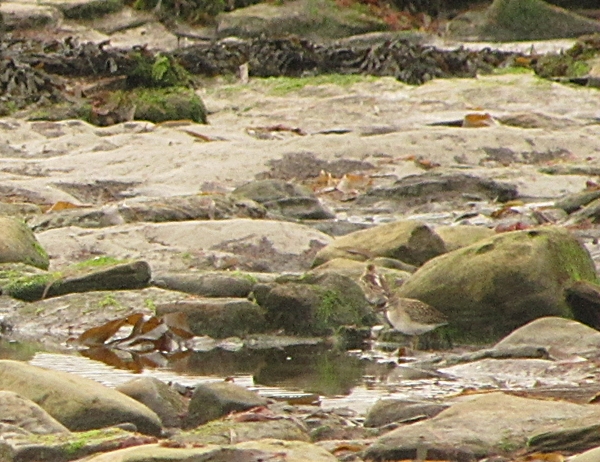 4.5 hours from 08:25Fulmar - 11,394 W; quite a few east too in the last hour or so.Blue Fulmar 2W (a dark morph and then a double dark morph, probably missed a fewof these too)Manx Shearwater - 24WSooty Shearwater - 16WEuropean Storm Petrel - 1W just along the shore, a few possibles earlier,further out as well but the waves got in the way....Bonxie - 32WGannet - 810WPuffin - 5WTystie - 1 juv WKittiwake - 27W (all adults)Teal - 13WWigeon - 2WStormie was at 09:10; shearwaters from 09:35 peak at around 11:45. If the windhad been more WNW rather than WSW it would have been much better than this Isuspect. 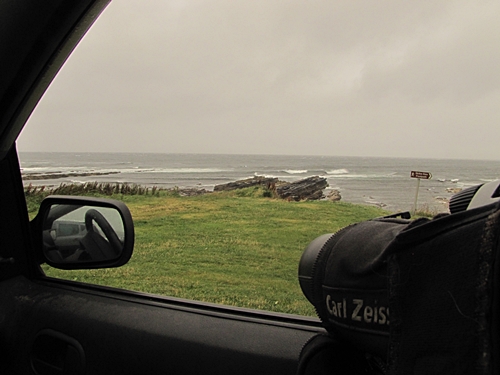 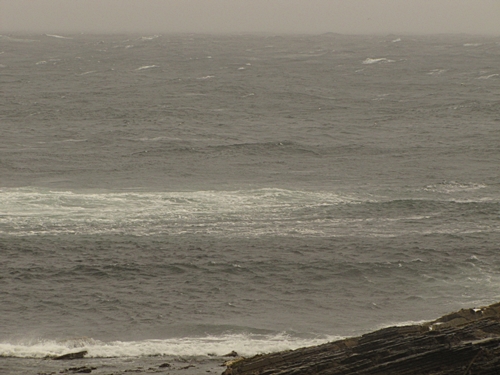 Posted by Alastair at 9:57 pm No comments:

Now that's what I call birding

On 13th a juv Hobby decided to spend the middle of the day roaring about the garden and environs. Heard initially from indoors whilst I was sanding the kitchen table I passed it off as a Kestrel. An hour later I was sitting outside in the sun, taking a break, tea in hand, watching swallows trickle westward with a thought of "a hobby would be nice", two minutes later the speedy one returned chasing and chased by swallows it then picked on a passing hen harrier and enjoyed a good joust with that before heading high, returning to the garden and then disappearing.

Today there were two Spotshanks on The Shunan mid morning, seen briefly, but well. Whilst scanning the water and mud a distant raptor call was heard and looking up to home there were two juv kestrels roaring around the rookery with a diminutive Merlin. Also on The Shunan today 7 Blackwits and a ruff.
Posted by Alastair at 11:33 pm 2 comments:

A brief seawatch of an hour from Brough of Birsay produced a single close Sooty going west this evening.

Waders still have chicks shock. Oystercatcher with one 3/4 grown chick by the Shunan where Curlew still have chicks as well. At Evie the usual site had a late brood of Ringed Plovers with two, ten day or fortnight old chicks.
Posted by Alastair at 11:12 pm No comments:

A single on 6th and two today with five Blackwits on Tuesday and three today. Large numbers of lapwing around at the moment too.
Posted by Alastair at 6:52 pm No comments:

The day we went to Hoy and went up Ward Hill in 2013, just refound the photos. The most extraordinary thing were these two Horntails on the very summit. 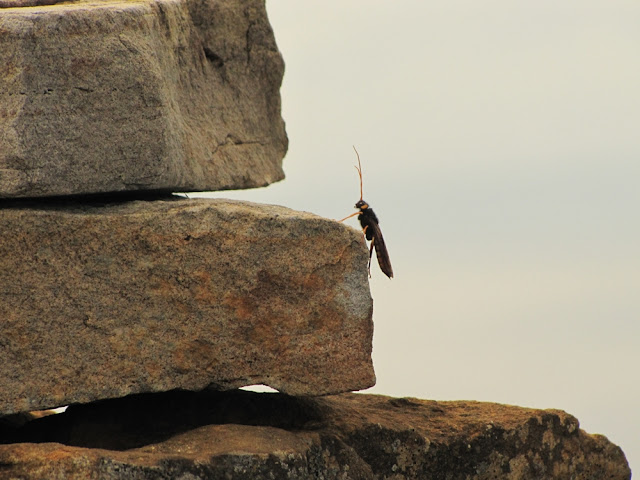 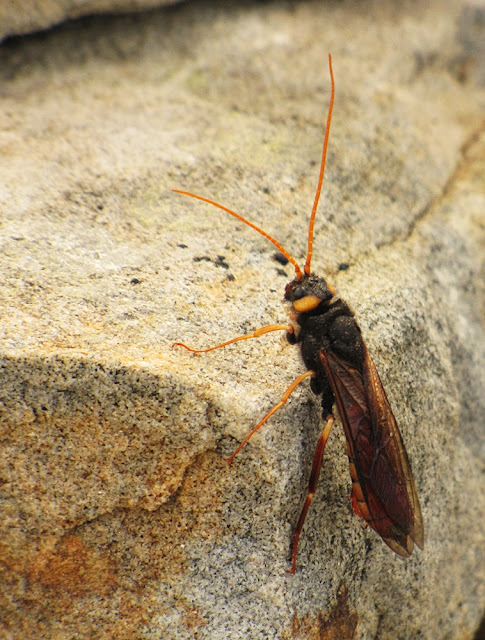 Urocerus gigas on the summit of Ward Hill, there were two

On the way up Mountain hares and great views, on the way down the midges killed us! 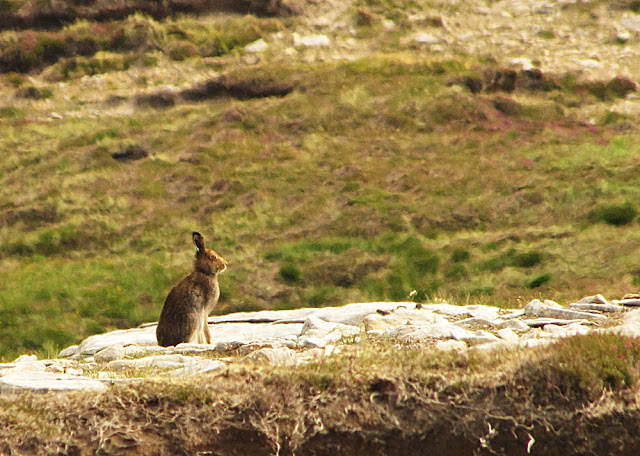 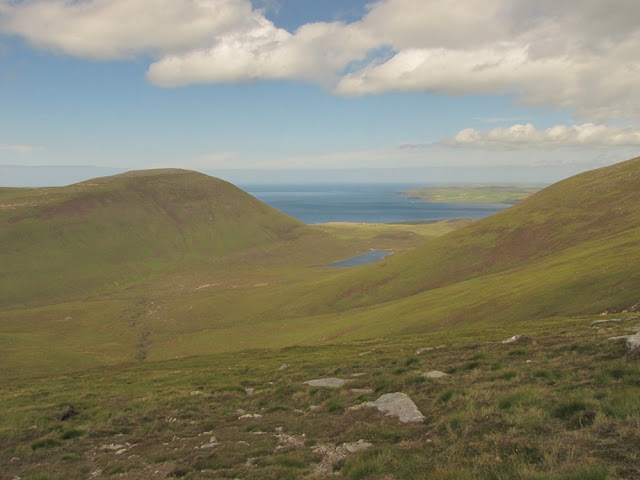 Went back to have another look yesterday and hopefully hear the calls but the birds didn't show, last seen 9am but heard at lunchtime. Hopefully someone took some video and got the calls....
Posted by Alastair at 7:57 am No comments: