Offspring required taking to meet friends in kirkwall etc so an excuse for a toodle east. The lack of an extended day did limit things somewhat so it was a bit of a rush but first stop was the Toab Glossy Ibis. As well as trying out the new Canon I'm also messing about with digiscoping again, just as a backup for record shots of distant things. I tried a bit of digivideo, handheld Nikon CoolPix 3100 as well.

Ok, not great but passable, you can see what it is. 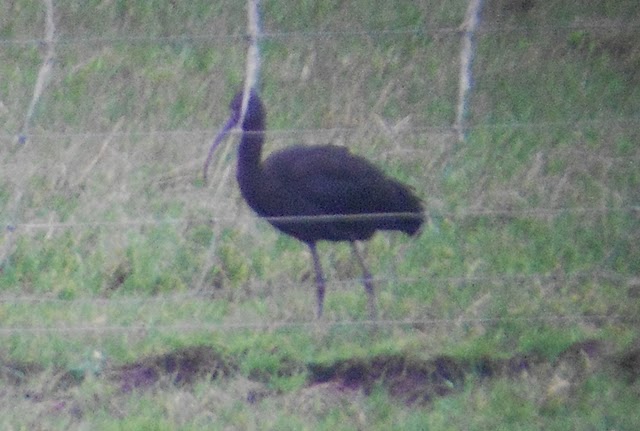 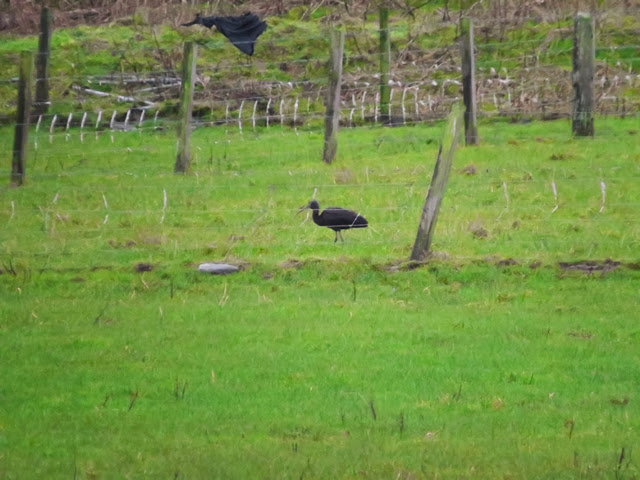 Then down to Point of Liddle where there were some nice surprises, amongst the 19 GNDivers and 6 Slav Grebes, 26 Velvet Scoter and 362 Eider, plus assorted LtDucks there was a close inshore Red-necked Grebe and a Black-throated Diver, very nice.

I probably should have spent more time searching for Mr Surfie but instead went to Scapa with thoughts of the thick-billed one.... just Tysties and 11 Slav Grebes here though. All the same a very nice afternoon out east.
Posted by Alastair at 9:59 pm No comments:

A huge flock of 817 Pochard counted yesterday on Loch of Harray by the Merkister was added to today by a flock of 387 Twite at nearby Russland Mill. Both spots are within my Foot It zone so hopefully they will hang around, as hopefully will the Meadow Pipit which can be a tricky species in january. Down at Howaback, which is just beyond my one mile Foot It limit, there was a (hard to get) Pied Wagtail as well as a Slavonian Grebe. 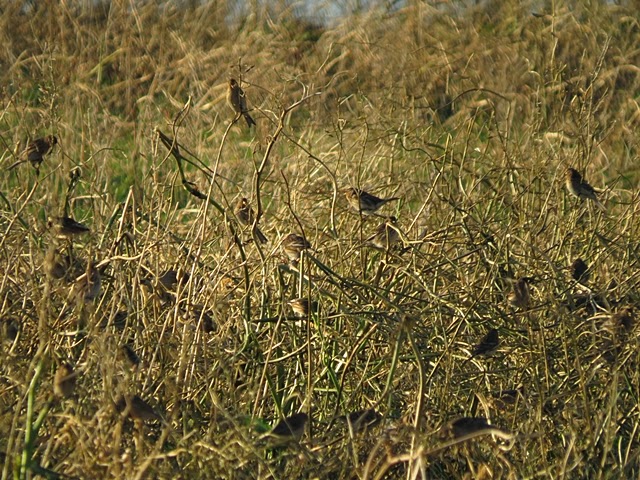 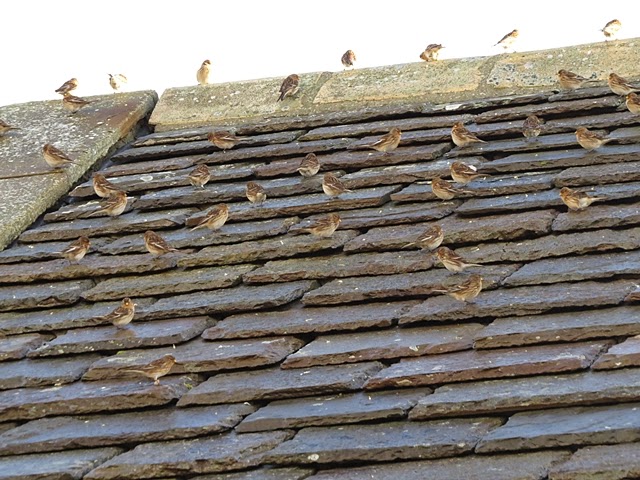 The garden yielded further out of season fayre with a Woodpigeon and  Black-headed Gull.

The afternoon was spent at Palace, a family walk which really and no special birds, but more interesting light with which to play with the Canon SX50 which has replaced the faithful (but sometimes rather irritating) SX20. 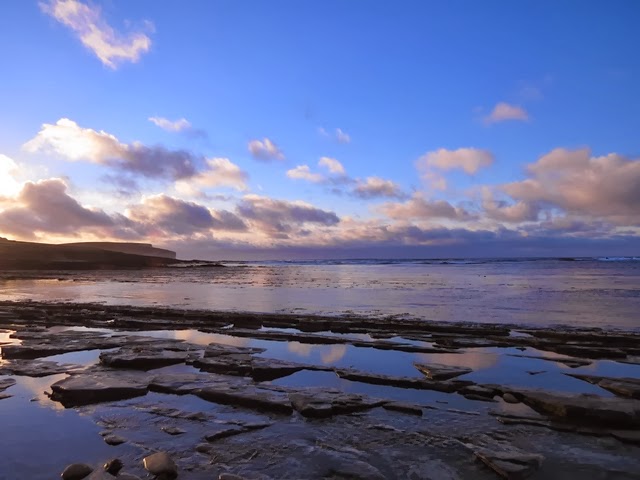 The camera seems to have a depth of colour and sharpness that the SX20 did not achieve. 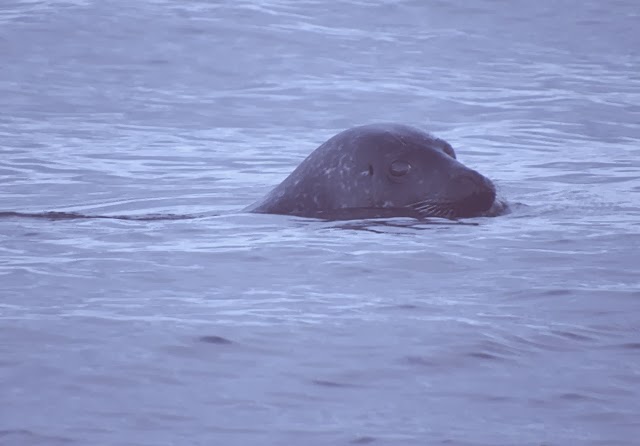 The light was poor and the zoom high, the image seems pretty sharp to me. 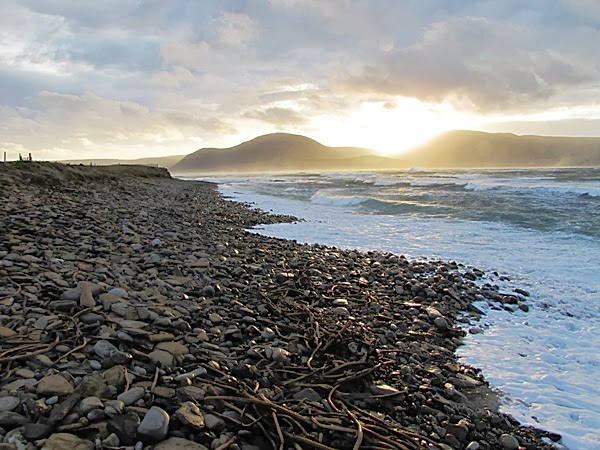 Warbeth Beach, Stromness, it was barely possibe to make any headway into the wind yesterday.
Posted by Alastair at 10:26 pm No comments:

Having failed to see the glossy one yesterday, I now suspect it was hiding behind the wall of the field, I nipped along there first(ish) thing and connected. The ibis walked out from behind the wall when I parked, it was just across the road. 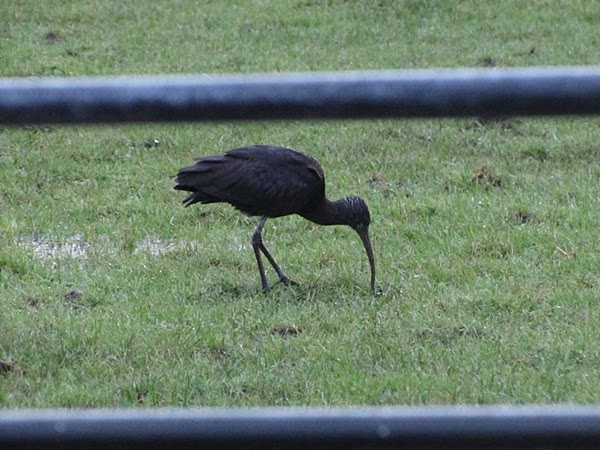 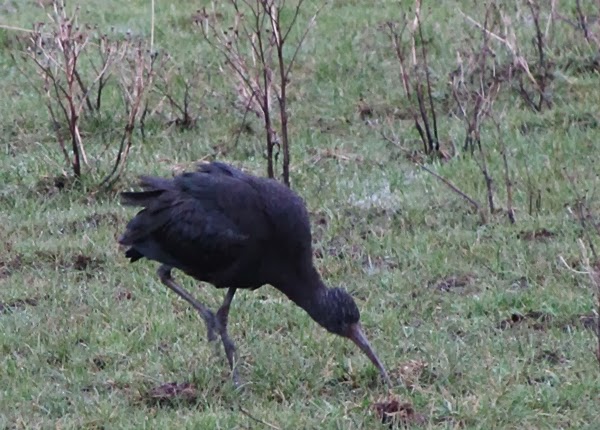 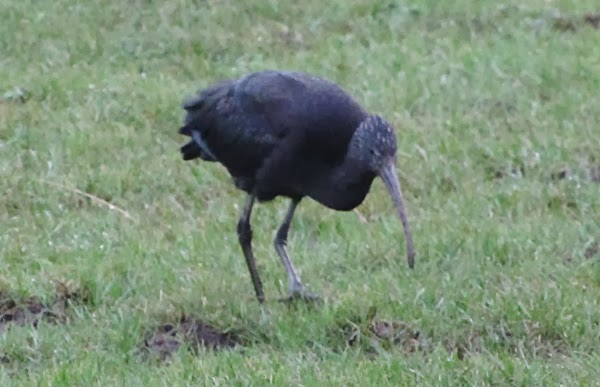 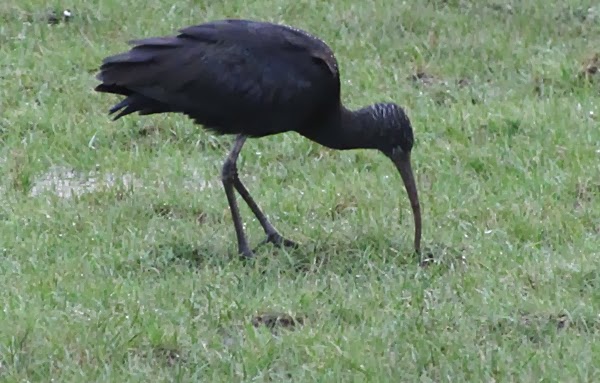 The ibis was finding plenty to eat in the peedie field.

I moved on to Evie, the idea being to check out the whale corpse. However, high tide,a few sightseers and the appearance of an Iceland Gull when I got there weakened my resolve. half way to the corpse I gave up, most of the gulls were at the other end of the beach.

Searching the other way a Leeb was a fair reward, actually much less common here in winter than an Iceland Gull. 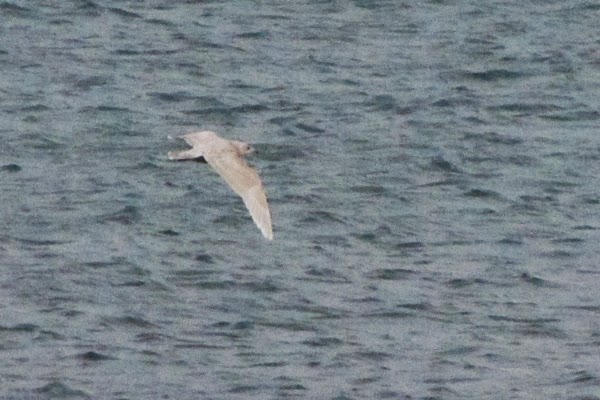 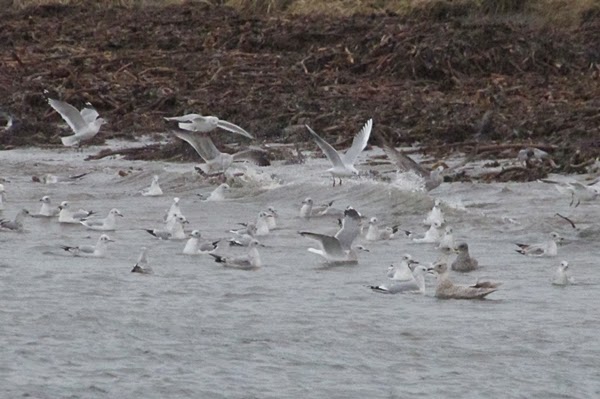 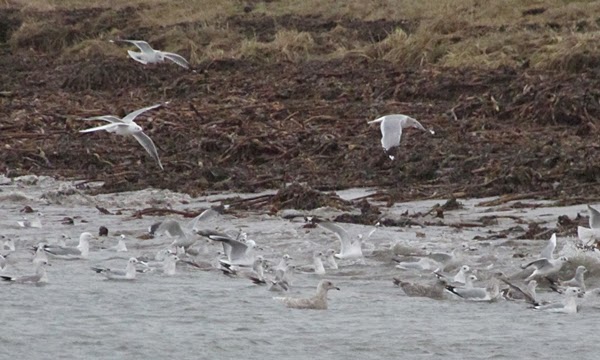 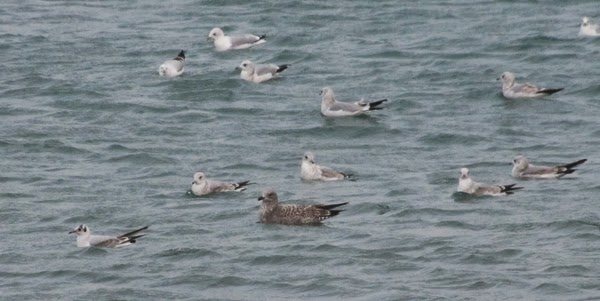 There has been no sign of the Tree Sparrow at home since last Saturday, 14th, sadly it may have gone or been predated.
Posted by Alastair at 11:26 pm No comments: 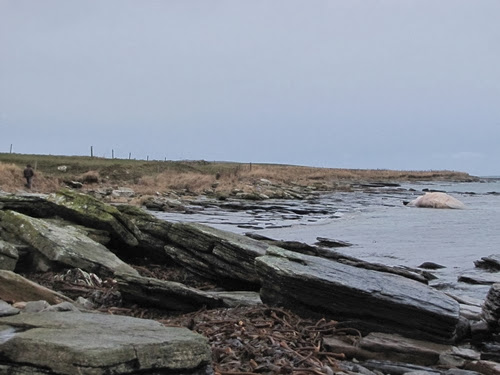 The Twitch - I didn't get there that early, it had been light for a while, but I was still the third person there. See the other two and the (rather dead) sperm whale. 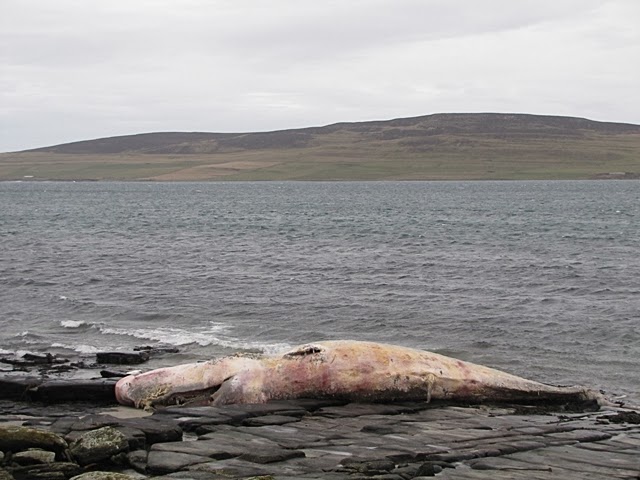 Here's the scene, though a bit of a cheat as the gull was not feeding when I first got there, just sitting around. It then flew off strongly north. So after a bit I and two others (two more) tramped north along the shore. I looked the wrong way whilst an otter showed.

About a mile up the coast, scanning, and eventually the whitest one came into view. Flying back across from Eyenhallow, where it may roost. The pure white plumage and very long white wings, very pointed, were a sure giveaway. 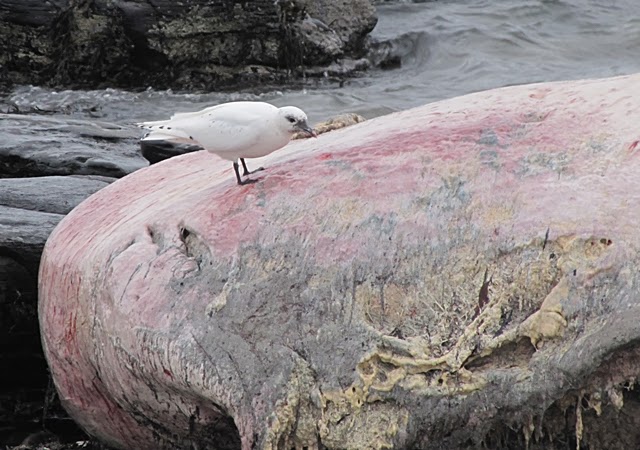 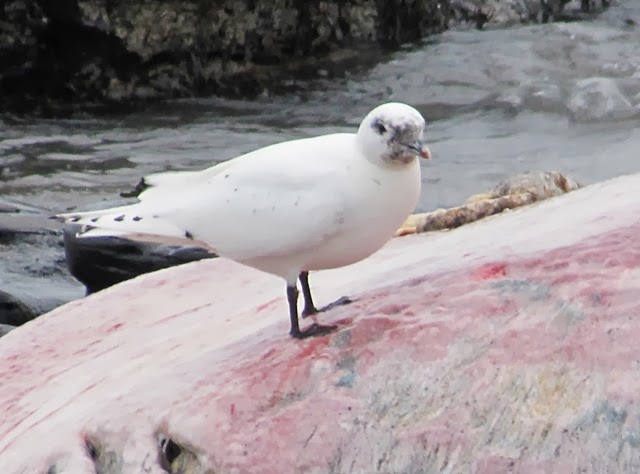 This is a very white individual and I do wonder, what with the plumage and the yellow coming into the bill if it might not be a 2cy? The gull book does not entertain such nonesense of course, 1cy or adult are the options. 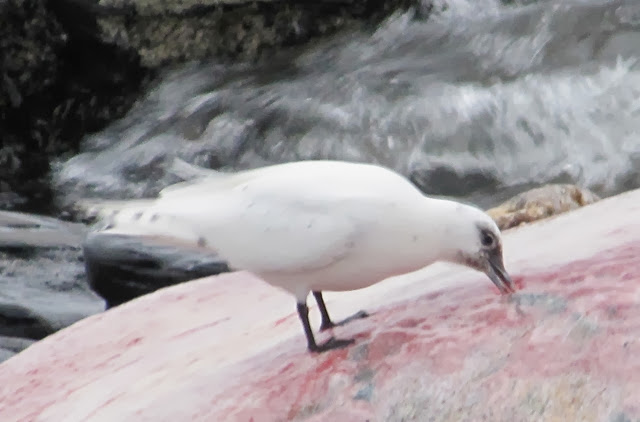 The bill it would seem is especially adapted to the task of piercing the tough outer whale skin. The gull continually worked at a tiny hole. 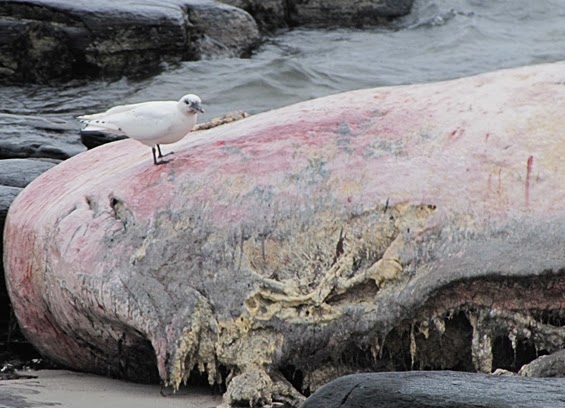 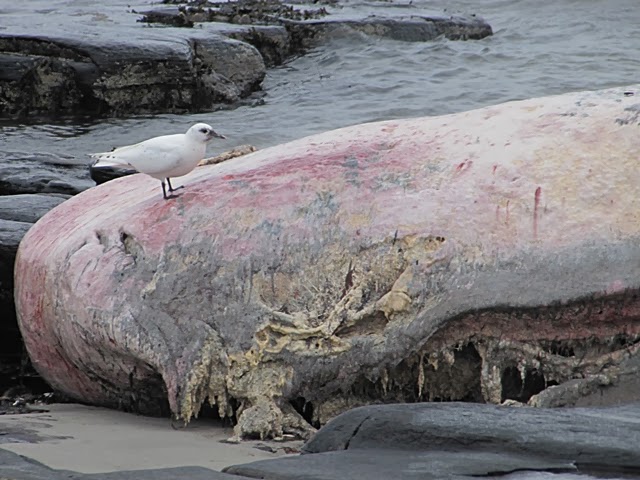 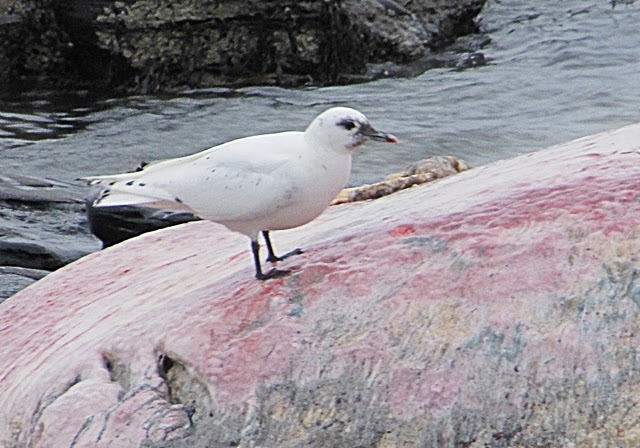 Nice bird, early Christmas present I guess, although I could do with a year end find.

WeBS counting today produced two nice drake Goosander on Loch of Bosquoy. The 120 or so Teal on The Shunan refused to reveal a G-wT though.

Goose counting in the rain

Goose counting day again so I headed over to the East Mainland to my goosey spot. Nearly 4700 Greylags counted and a rather low number of Pinkies 209. Also missing were Great Northerns, only abut 4 seen and Slav Grebes, same again. However, two good sized Eider flocks, a 607 and a 330 and a decent flock of 419 Long-tailed Ducks. Only other highlights were a flock of 36 Velvet Scoter and three Hen Harriers.
Posted by Alastair at 9:26 pm No comments: