I'd rather have a white one please...

I rarely go out without the scope but yesterday afternoon I was feeling lazy, and it was windy so keeping it still here would be a challenge, so off I set... First up, behaviour of other species indicated there was a raptor about. After a lot of scanning about I was rewarded with a pretty brief view of a dyke hopping large falcon, well very large. Big Peregrine was my thought but... Next it was in the air scrapping with a Peregrine, what I guessed in comparing them was a small male. This time I got a bit of a longer view and the thought of Gyr did go through my head but... In the end I just passed it off but one or two things did bother me about the id. So when I bumped in to my neighbour by his Loch of Bosquoy house late this afternoon and he said he'd had prolonged and close views of a dark phase Gyr hunting yesterday afternoon I was a tad jealous. Trouble with dark phase birds is that I think they are almost impossible to get accepted as the falconers hybrid issue comes in to play. No doubt this was the real deal. Whatever, great bird, even my brief views were of quite a beast. Story wasn't over though as after getting home just in front of the rain this afternoon, sat drinking tea and Louise saw a very large falcon with contrast between the underwing coverts (dark) and the primaries (pale) scoot over our big sycamore and into the distance.

When I finally got to The Shunan yesterday afternoon with no scope and wanting to check if the Blue-winged Teal was still there I just blasted off a pile of photos. 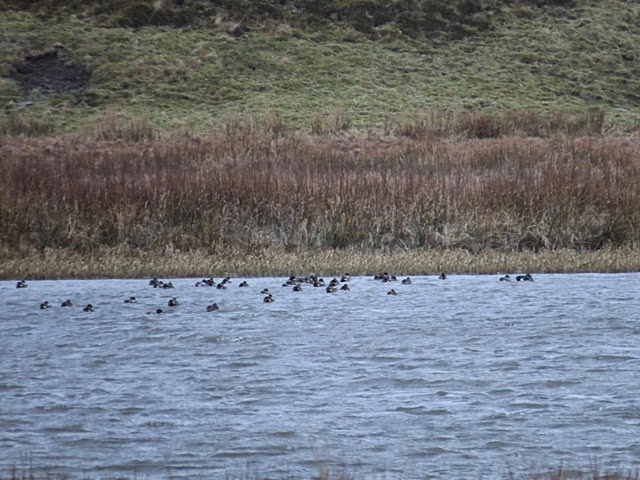 There's the B-wTeal on the right of the picture 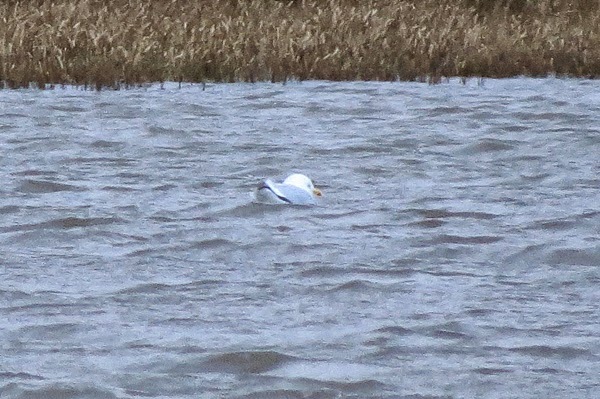 However, this is a tad more problematic, adult Iceland maybe, opinions welcome.

I'll take the scope in future.

Seawatch yesterday produced Fulmars going 3,000 an hour and two Blues with them, and not much else but Guillemot was a Patchwork tick.  The gull scrum produced nothing of note, but always an interesting moment. 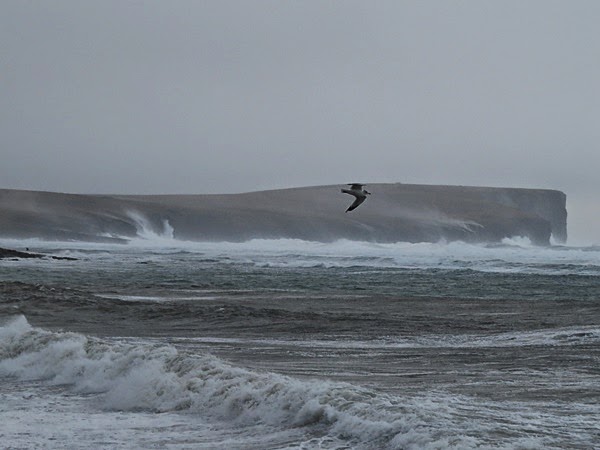 A very blustery walk around the Links revealed  two Reed Buntings, tricky to get there. 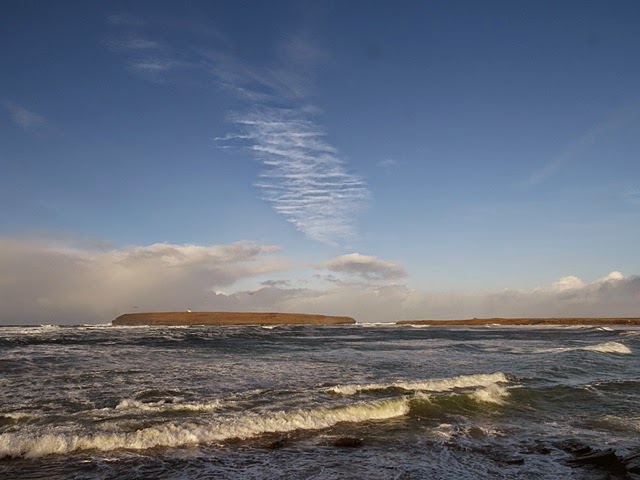 Late afternoon, end of the telescopeless walk around 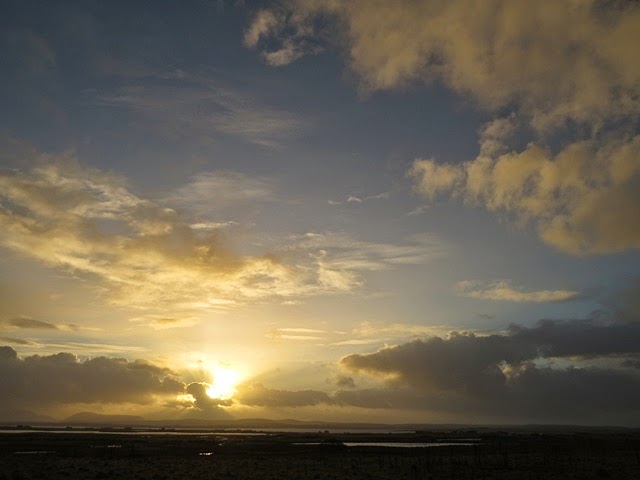 Today both the Blue-winged Teal and the Green-winged were in view, there was a Pied Wagtail and a drake Goosander at Bosquoy, early Oystercatcher and drake Shelduck on The Shunan and Louise finished the day off with a brief view of the Gyr (thing) from the kitchen window. 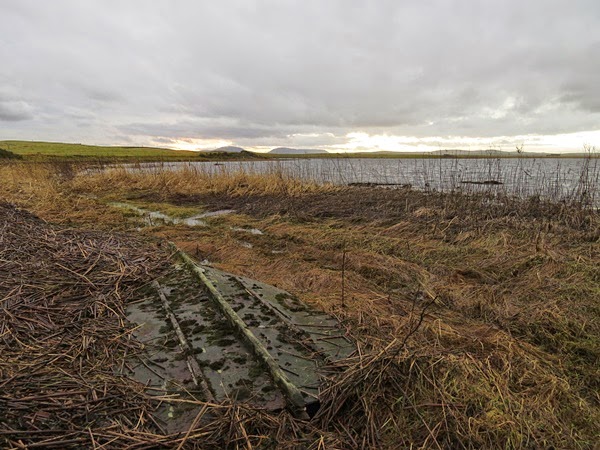 The excitement of the weekend 's birding did not end on Saturday as a 2cy Iceland Gull flew past the kitchen window at about midday on Sunday and the Blue-winged Teal drake was still present. Careful observation of the duck associating with the drake by AL and myself showed it to be just Anas  crecca and nothing more exciting.

A trip to the Links with the hound was not very exciting just adding Song Thrush, although Carrion Crow and three hybrids were present.

Whilst running out of the house in Crocs and T-shirt to try to get better views of the Iceland Gull, which had vaporised, I disturbed a pipit in the field by the house which might have been a Rockit, unfortunately it didn't call and fled into the distance promptly, a species that I would like to add to the patch list and must be possible.

Another interesting moment from the Saturday at Bosquoy was the very small wader that flew with the small group of Golden Plover, really had me wondering but it was way away for an ID.... so it goes.

Despite not getting out as much as last year in January I'm certainly seeing some birds. This morn must rate as one of the best winter morning outings on the patch (perhaps on any of my patches past and present).

WeBS counting so despite the very, very cold, damp morning with the occasional wintery shower I was out there with the hound. Careful scanning of The teal flock on The Shunan produced a Blue-winged Teal drake (with possible suspicions of a duck too). Despite skulking at the back the bird gave reasonable views and then came a wee bit closer for a while. A twitch was initiated and all of six birders appeared to hunt for it, most of whom were successful. Before the twitch got going though, having had good views I was off down to Bosquoy to count there too. A good omen was the Jack Snipe we flushed as the hound and I skulked along the holiday home fence to get some shelter. In amongst the 200 or so teal I caught a glimpse of a drake that looked interesting and so it quickly proved with Green-winged confirmed. 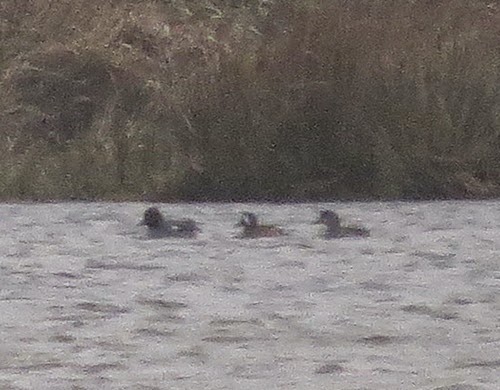 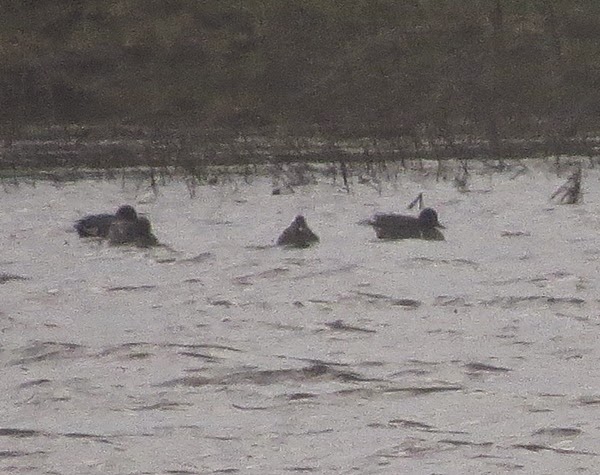 Not the greatest pix in the world but given the cold, the hail and more cold not too bad. Interestingly the Blue-winged Teal was first seen last year on 18th January on Bosquoy so it is very likely this is the same bird. This time it was associating with a duck quite a bit and although in life the range was too great one of the photos seems to indicate the possibility of a duck B-wT. I will investigate further tomorrow.

The Green-winged is a much hoped for find, something I'm very surprised I'd not found before, total delight was the reaction on the Bosquoy shore. 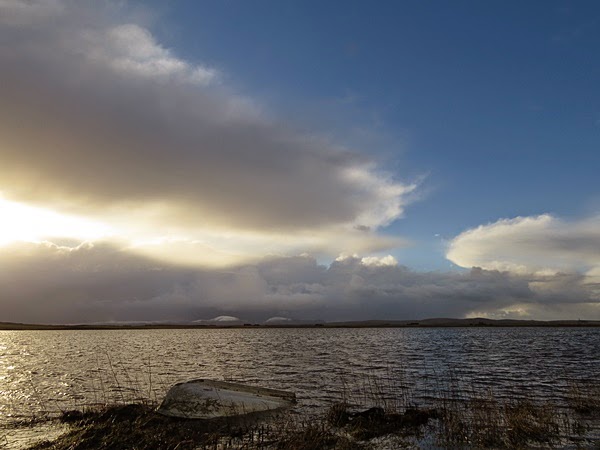 Even managed a new boat picture for my series. The lucky Hammers t-shirt will never be off my back now.
Posted by Alastair at 6:44 pm 2 comments:

A bit late down to the sea but between 10:20 and 12:30 seven Glaucous passed Point of Buckquoy. At least it was watchable today and Fulmars and Kits were passing with Fulmar at 3,000 an hour at a maximum and some hundred or so Kits passing (with just one juv). Also of note were 32 likely but not certain Barnacle Geese distantly east, a male Merlin, a Goldeneye drake. There was a good movement of Great Black-backed Gulls with nearly 100 in the first hour and a steady stream of Common Gulls. 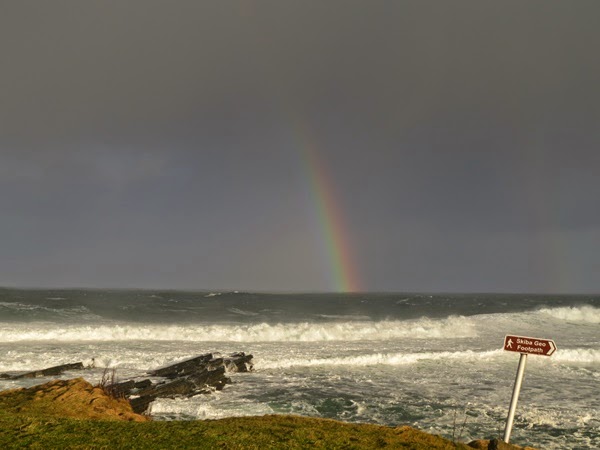 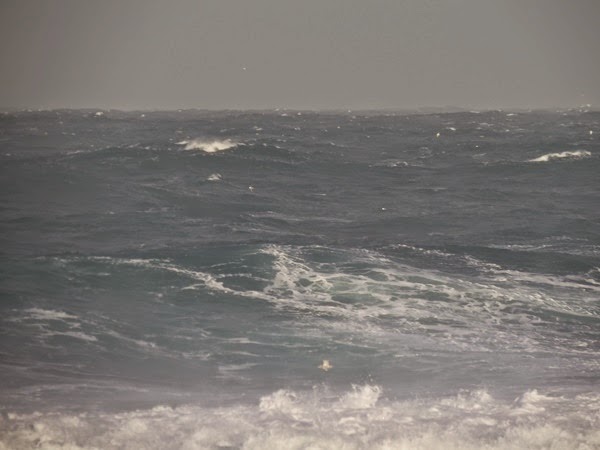 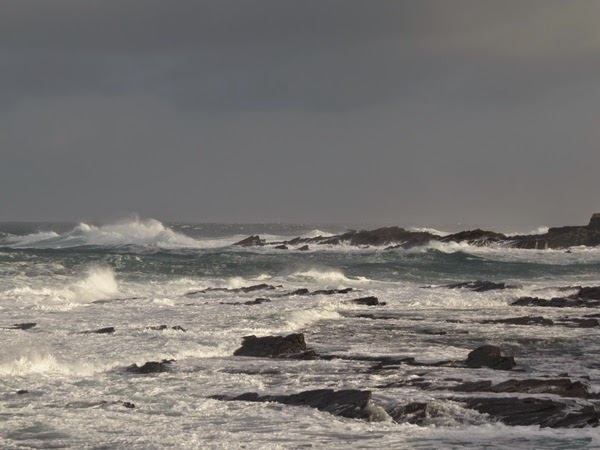 After 12 I walked down to the whale bones with Louise and the hound. The waves were spectacular. The last Glaucous juv went by as we were by the bones. 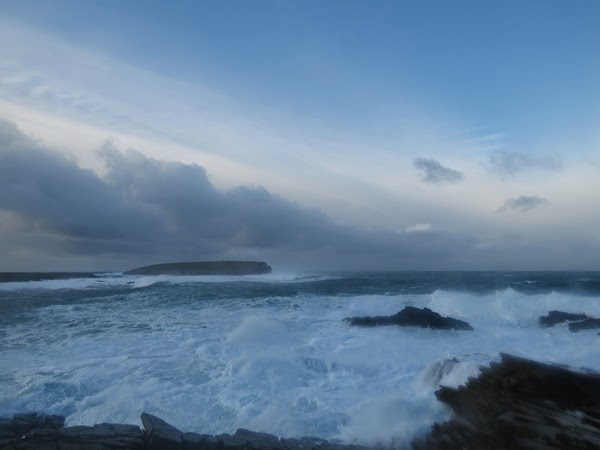 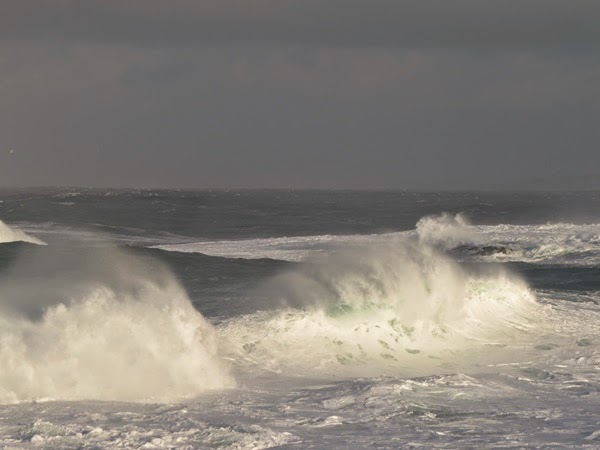 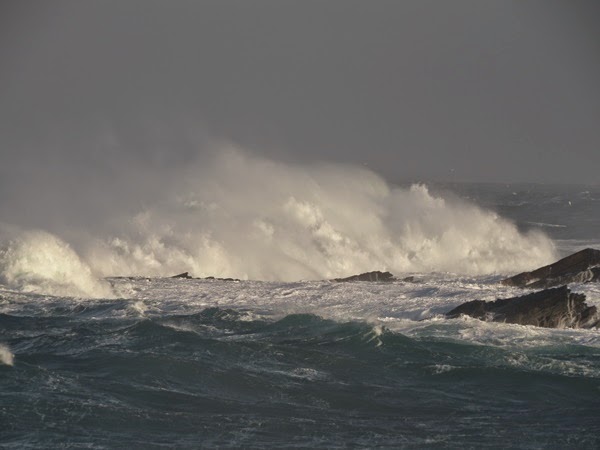 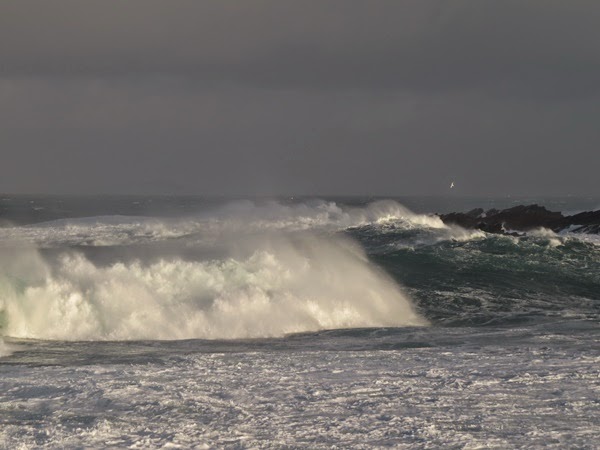 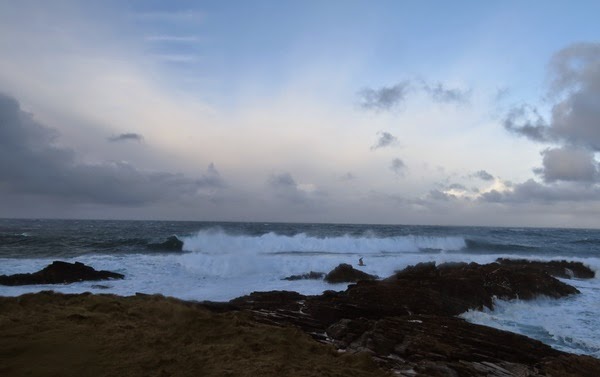 Glaucous past the bones 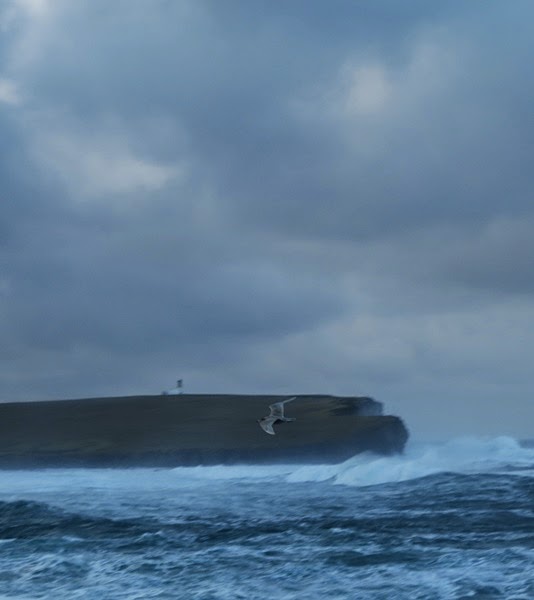 Posted by Alastair at 3:52 pm No comments:

Managed to get out briefly to Palace but it was hard enough to stay standing up let alone do much birding, hound wasn't that bothered though. 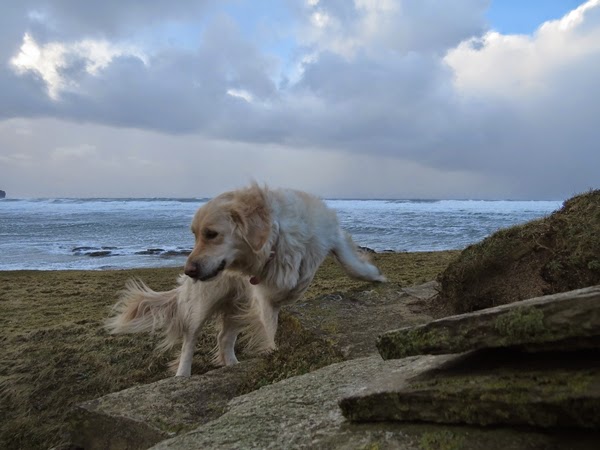 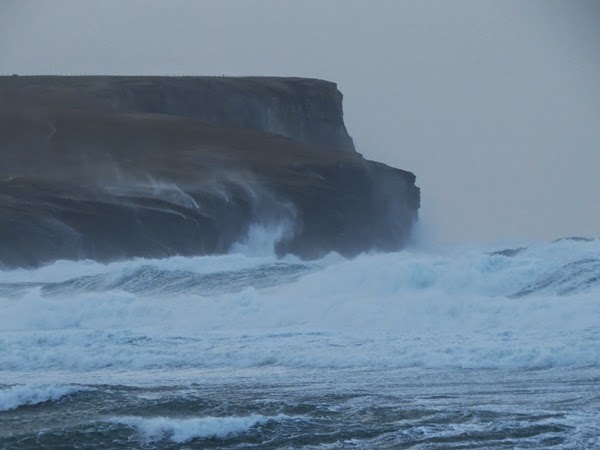 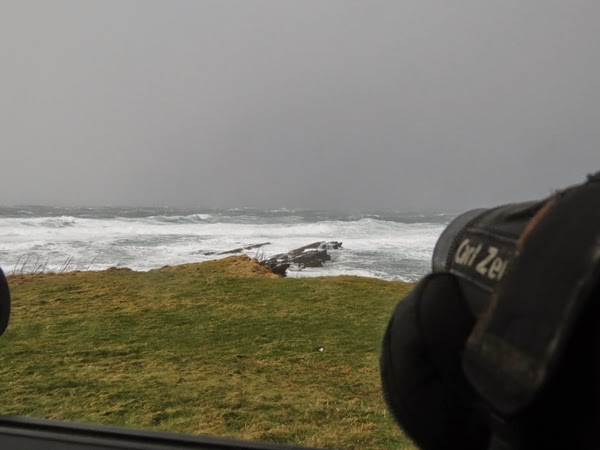 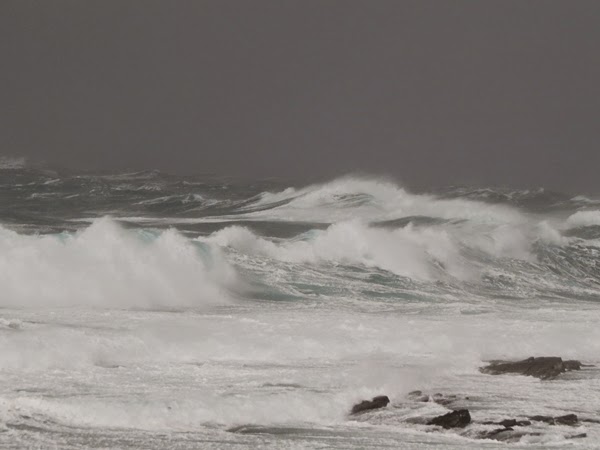 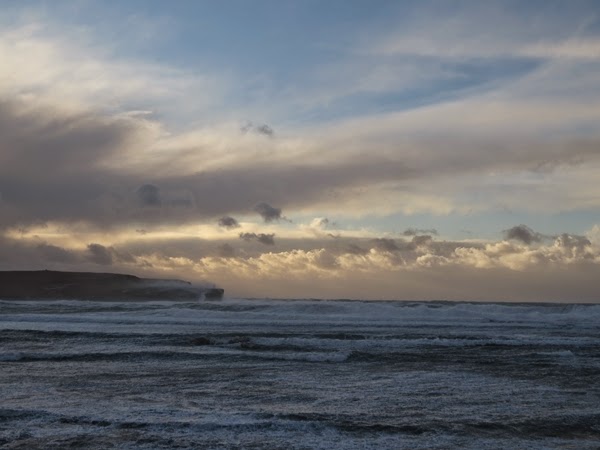 
The Whoopers are still on The Shunan and a Moorhen walked across the track as I drove up.

No not footie it's the Patchwork Challenge. Site 2 and a good start with a Glaucous Gull, some Snow Buntings and sometimes awkward to find there Robin. 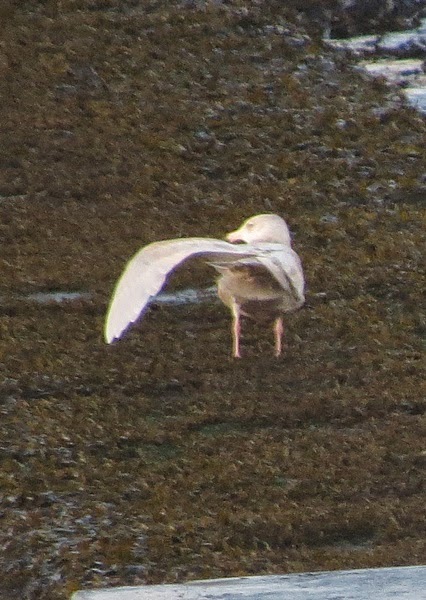 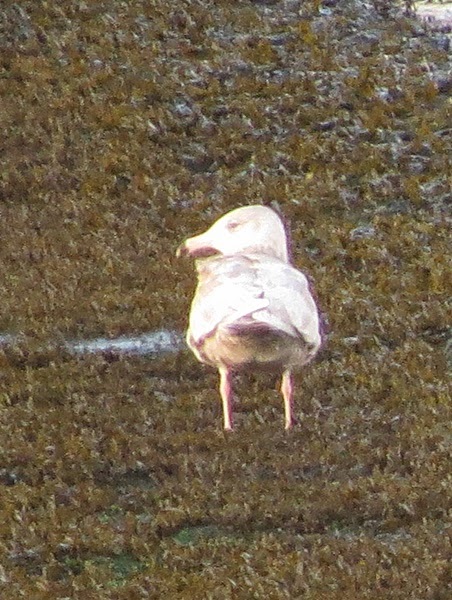 Back at the ranch, playing with the GoPro I found one of our Robins is ringed. Now hopefully within the 6,000 or so photos there are enough to get the whole ring sequence... 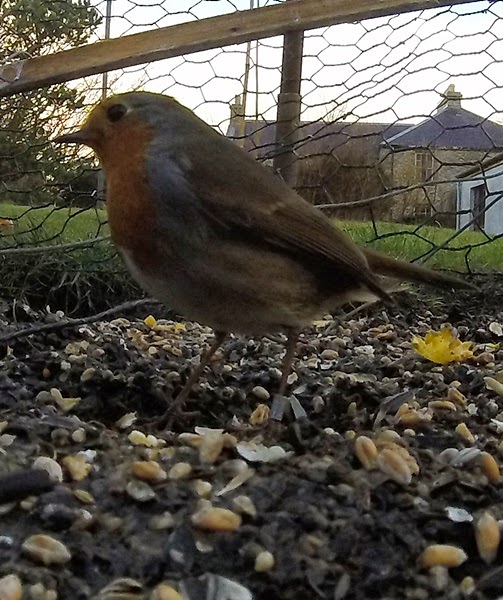 Not much birding today. Some bathroom decorating time as the weather was pretty rubbish a.m. Things improved in the afternoon and spent a casual two hours wandering around the nearby fields and looking in the garden. Kestrel was a good bird, sometimes hard to get here and the Rooks and Jackdaws came in to the roost but then left, not sure if they have returned. 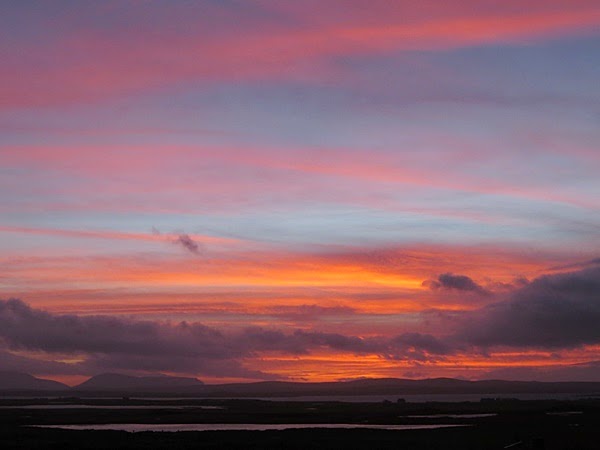 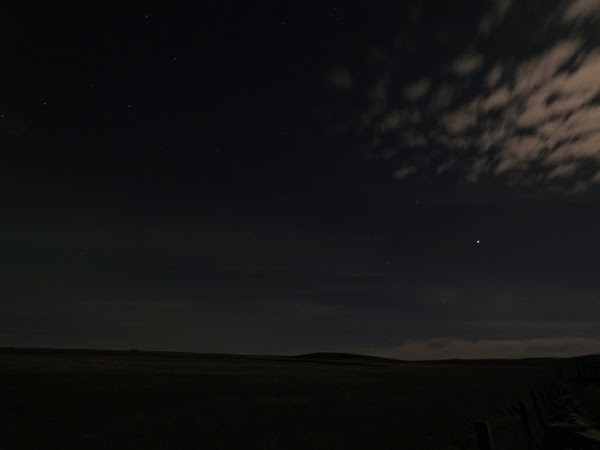 At least it wasn't windy, but it rained all the time I was out on foot.

I went down to do the ponies at nine or so, hoping to nab the Pinkie, Fieldfare and Redwing which were present yesterday, job done.

Had home duties til eleven but then off on foot around the patch, in the rain. Star bird and unexpected was a Ruff at Loch of Bosquoy where I failed to find Jack Snipe or Goosander. Then searching around at home failed to find the recent Brambling, However Linnet was a useful bonus as they can be hard to find. A late afternoon outing to Howaback revealed a huge flock of at least 250 Twite across the loch from Howaback and a hunting Merlin. Total 38 species, Foot It total, 34 species.

Tomorrow it may be an attempt on Patch No 2 at Palace. 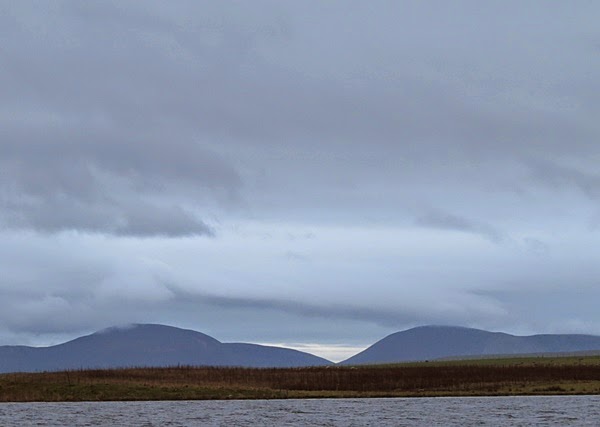 Posted by Alastair at 6:55 pm No comments: