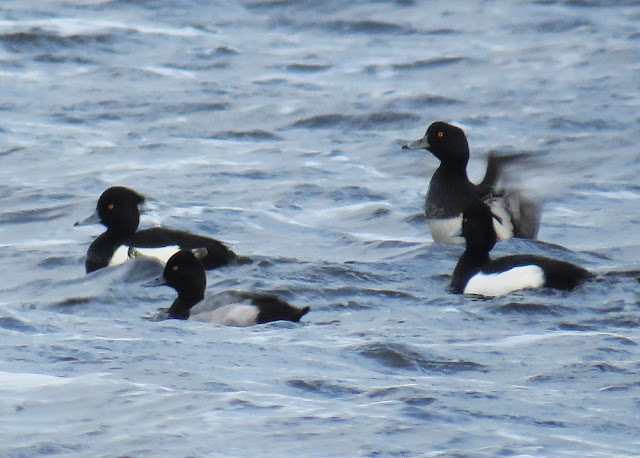 Post-script. On Sunday, 4th December Morris Rendall got photos of the Lesser Scaup which showed the wing pattern which I had thought I had seen accurately the previous week. There followed a lot of discussion with a variety of folk commenting and supporting the original id as Lesser Scaup. I had just been a bit too cautious! 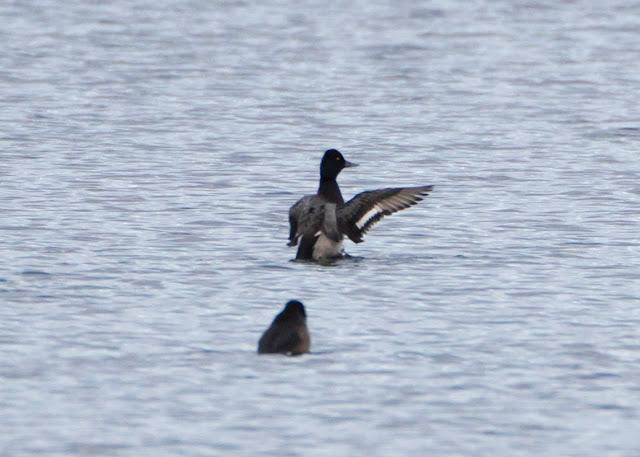 Note the white extends through the secondaries but not on to the primaries. 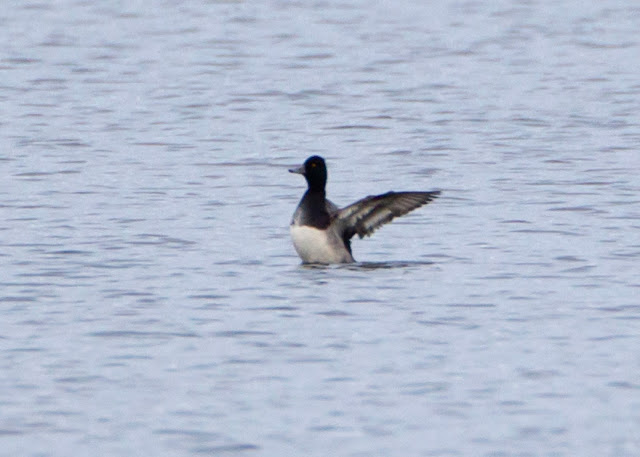 Note the dark bases to the primaries and secondaries creating a dark bar through the wing and the darker primaries contrasting with the white secondaries. The underwing of both Greater Scaup and Tuftie are whiter and brighter, pretty evenly pale throughout with pale bases to the flight feathers.

Many thanks to Morris for allowing me to post these excellent photos.

Well that was educative. Very different light today, bright and sunny and quite still all day. Problem number one was refinding the bird which took two attempts and a couple of hours (broken by needing take take younger daughter to work). Eventually AL relocated it, I'd actually seen it but passed over it earlier. It was much further away today but in bright sunlight. The first issue was that the mantle is dark, so dark that in the bright sunlight, from a higher vantage point the bird was tricky to detect amongst the Tufties, however, looking at photos on Birdguides that is not necessarily a problem. Next problem was the sheen on the head which was certainly dark green. Again there are birds on Birdguides with a green sheen, the bird at Linlithgow in December 2014 shows this. Neither of these things could be seen yesterday. Third problem, although I'd seen the bird in flight yesterday and had been pretty certain that the white in the wing did not extend through to the primaries, today when the bird flapped that was more doubtful, indeed AL was pretty certain that the white was much the same as on a Tuftie. I do find this feature very hard to see, but it has been the clincher in the past with female type birds on both Loch of Bosquoy and The Shunan (that they were Tufties or at best a hybrid), bright sunlight makes this feature harder to detect though. I woud like a photo of this feature and now wish I'd photographed instead of looked yesterday when the bird flew. However, it is also worth thinking about the vermiculations on the mantle, on this bird they do not extend on to the flanks and I think on a "good" LS they should. Also they were rather fine and not as coarse as shown in the books or on most birds online, although again the Linlithgow bird was similar. Today the bird looked to be the same size as the Tufties, however, yesterday's photos shows that it is probably smaller, it did tend to sit higher in the water which birds in photos online also appear to do.

So a conundrum. It may be the bird at Linlithgow was a hybrid, it looks rather big in photos to my eye. However if that one was good, maybe this one is as well. I think a photo of the open wing is pretty much essential, looks like I need a boat, or the luck of the bird being close again as on Saturday. Orkney birders reading this please go and look at the bird, your opinions will be welcomed. Today the bird was out in the middle of the loch, towards the hotel garden, in the area of the huge white plastic sack on the far bank. (Loch or Boardhouse, Birsay.) 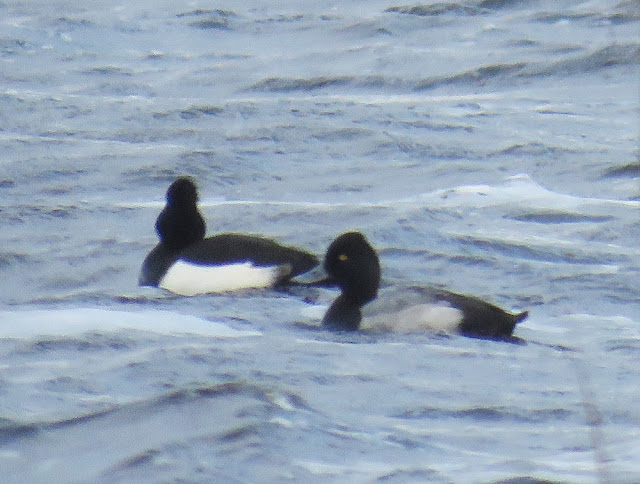 
Original text -
I was so pleased to find this, off patch or not it's a cracking bird. I've been contemplating changing the patch boundaries a bit for next season as I rarely get out to the Brough of Birsay and I've long thought that the loch could do with a bit more attention. Today I stopped at the west end of the loch on my way out, this is just in the patch, and there was a nice selection of birds, so on the way home I went down to the water works as I'd seen there were good numbers of duck there from the west end.

I did add something to the patch year list today though as this was on the beach. 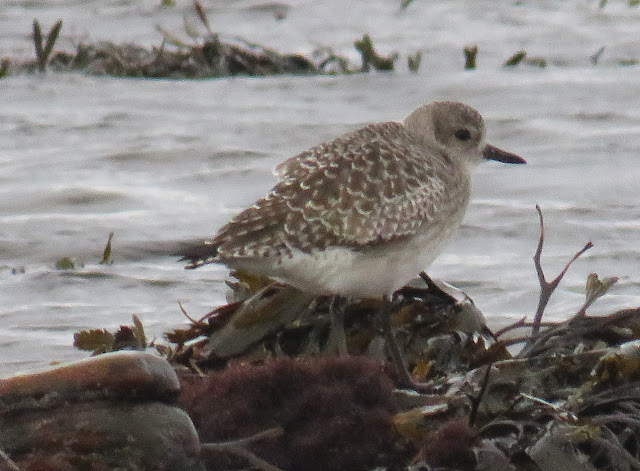 For the second visit in a row there were really good numbers of these, about 30 or so. 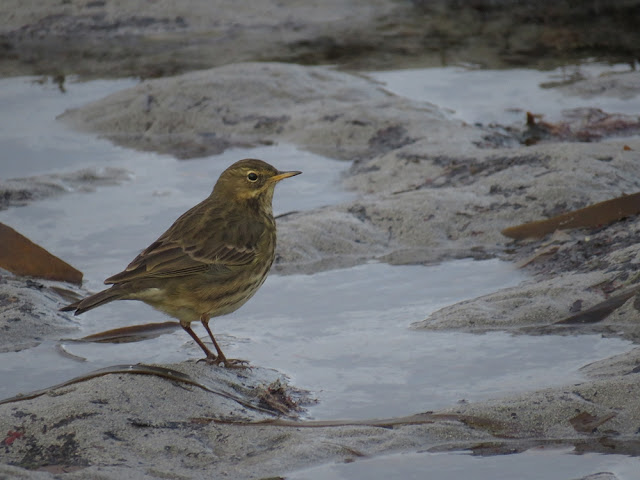 Plenty of seals today as well, about 50 Harbour and 10 or so Grey with two Grey pups. Not sure which species this one was... 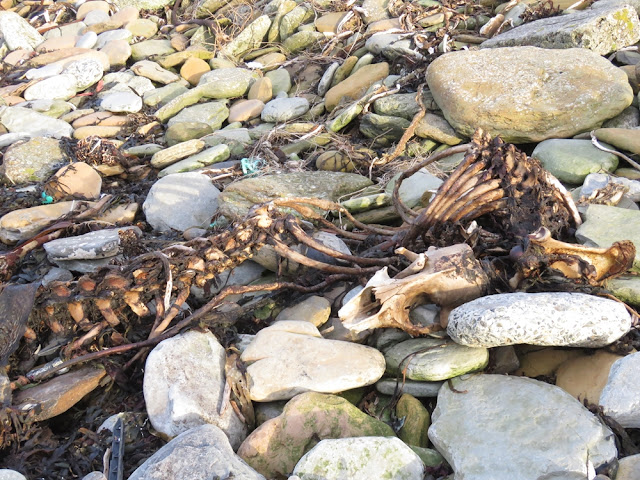 Posted by Alastair at 6:42 pm No comments:

A phone call from home just at the moment when I could have a late lunch break: 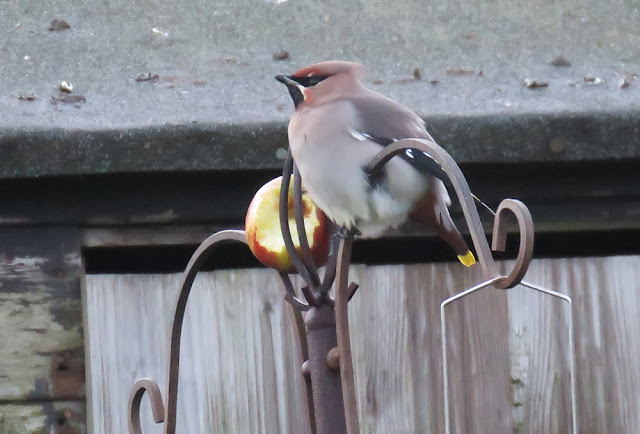 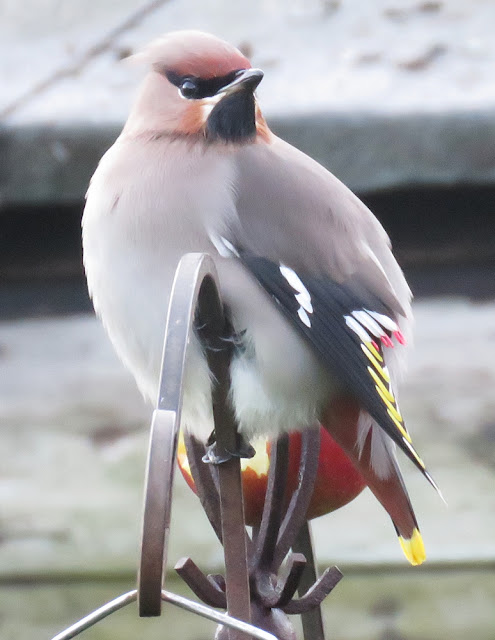 A bit late to table if you ask me!
Posted by Alastair at 9:53 pm No comments:

Strangely enough I'd only seen one Arctic Redpoll for sure before and that was many years ago at Redcar. The text came through after I'd helped with the ponies this morning and I managed to negotiate use of the Honda, necessary for this twitch as the bird is at Queenamidda, over the Lyde and then a long way up a quite tricky track. It was very icy here this morn and the Lyde was two tyre tracks in the snow. The track to Queenamidda was slightly intimidating, but negotiable with care (it would have been a lot more fun in the Fiesta!).

MR was there already having walked up from the bottom and BR was the perfect host, even including views of his "pet" Water Rail from the kitchen window. 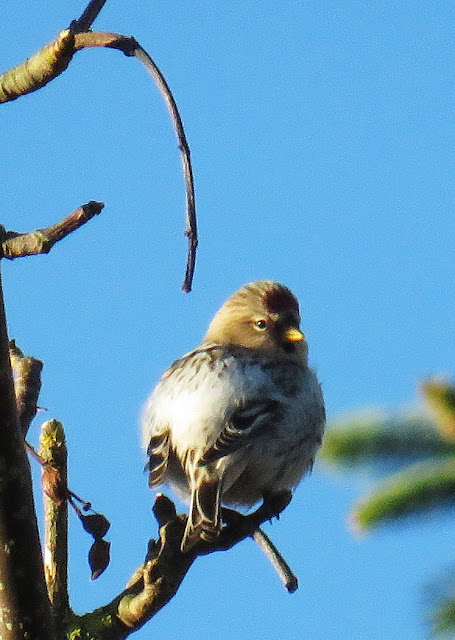 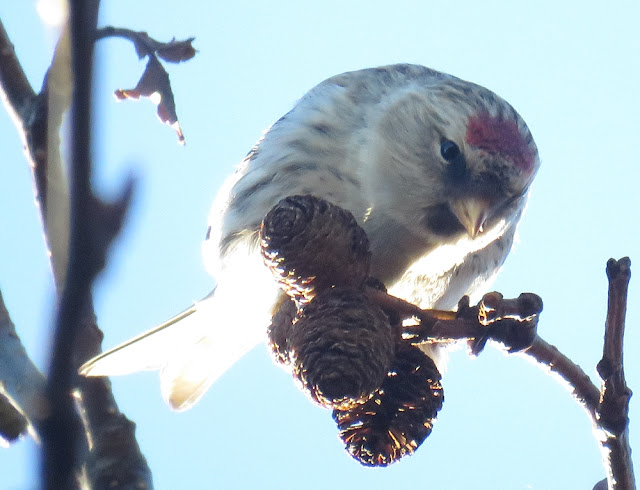 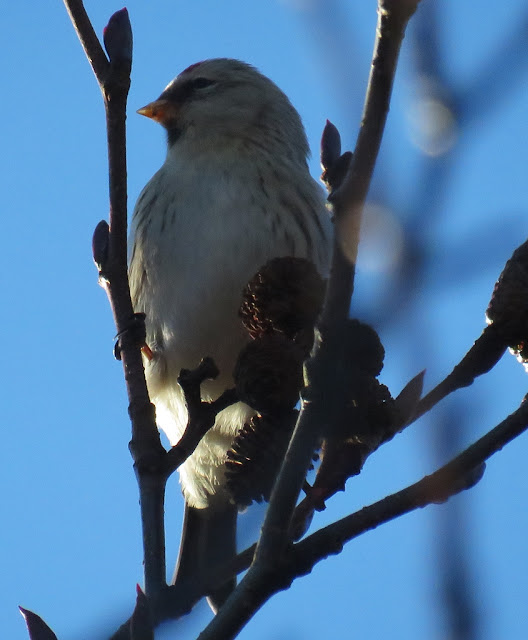 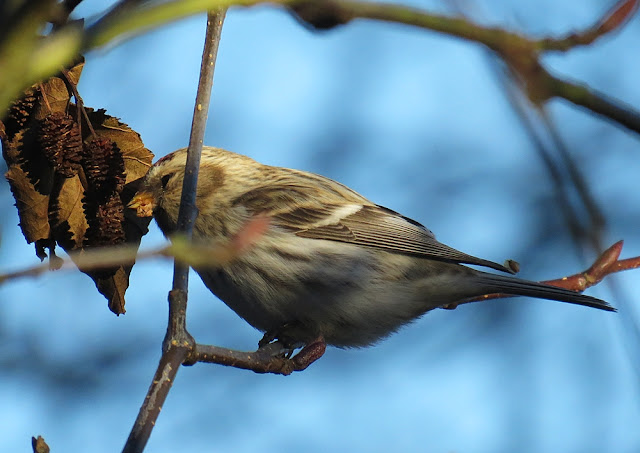 There was another bird in the small redpoll flock that may well also be a Coue's. 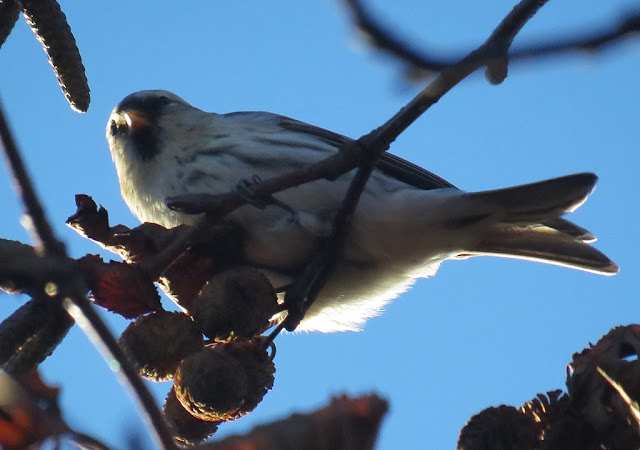 Coue's or just a Mealy? 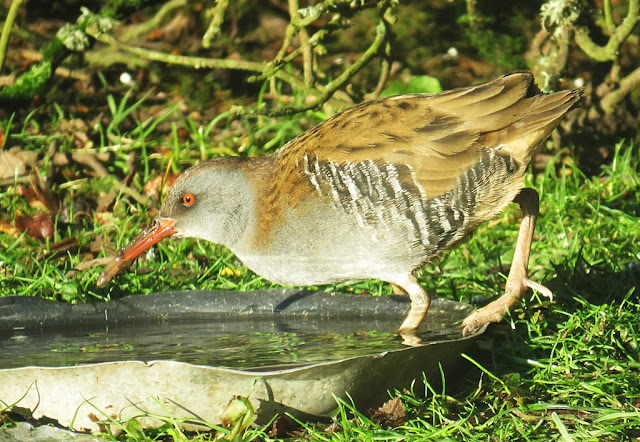 BRs pet from the kitchen window.

Also present was a very smart male Bullfinch which was softly trumpeting, no pix unfortunately as rather elusive. I think only the second or maybe third Bullfinch I've seen in the county. I missed a flock of twenty Waxwings by moments.

There was no time left to go for the Crane, which I missed for the sixth or seventh time yesterday, primarily because I've been looking in the wrong field. The wrong field did contain at least 51 (and probably a hundred or more) Reed Buntings though, and just for a moment a Chiffchaff popped out of the Oat crop which looked very like another tristis.

Back at home there were two Goldfinch, a couple of Chaffinch and unusually for me a Blackcap on the apples I'm putting out. 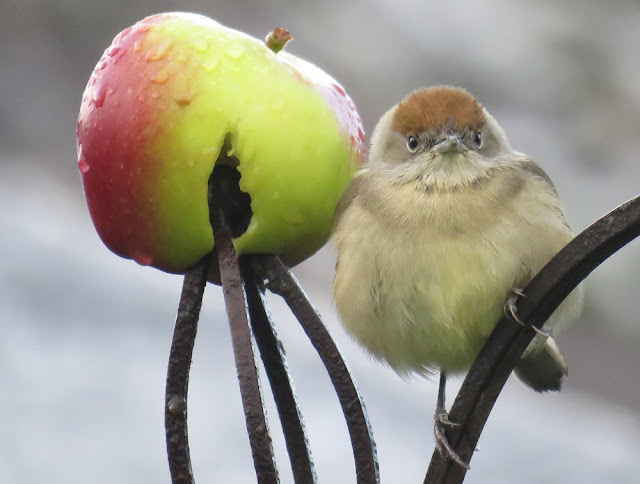 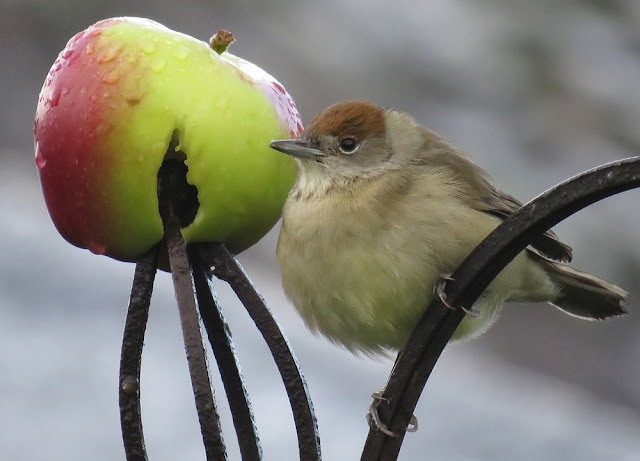 Another fan of the apples. But the intended diners have still not turned up... 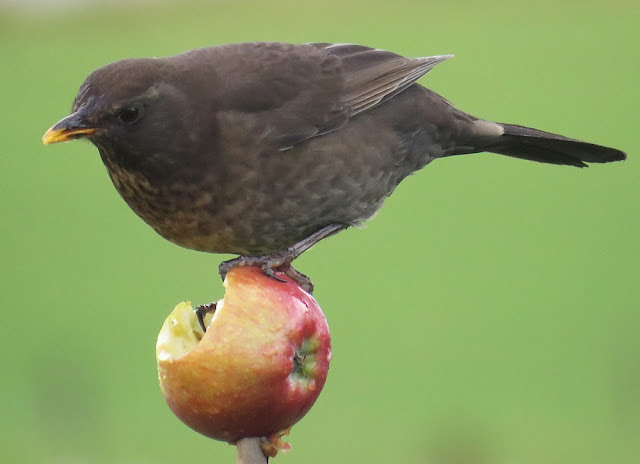 Yesterday the highlight was this "beautiful" hybrid Canada Goose. A tad galling as Canada is uncommon here and would be a year tick for PWC. 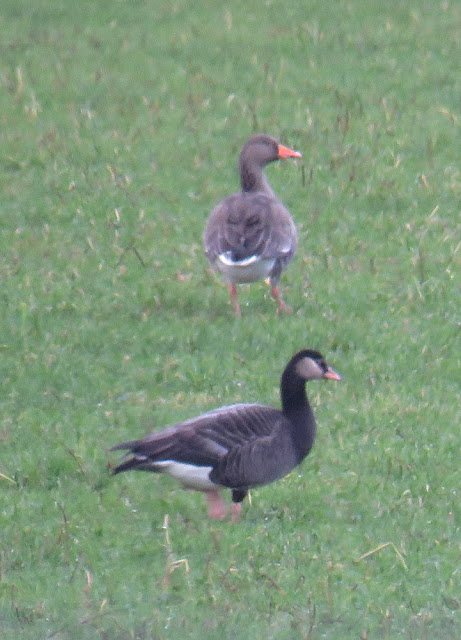 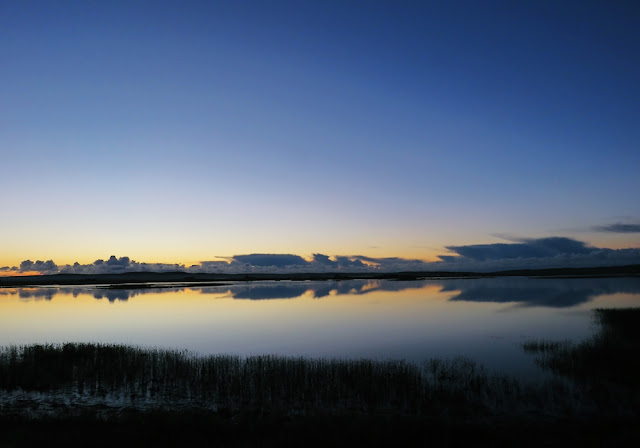 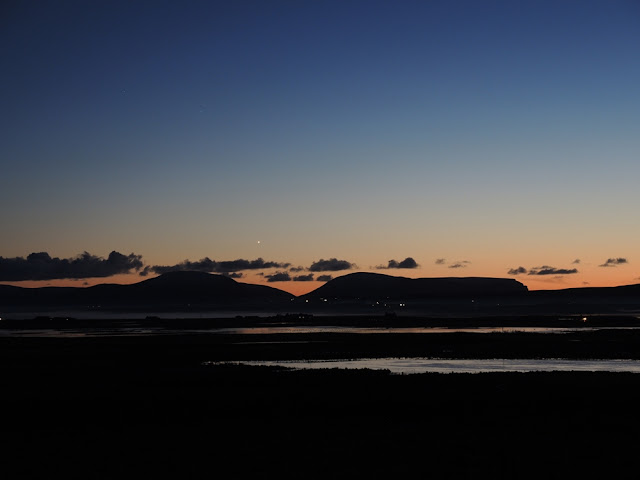 Thursday and a second Black-throated Thrush within striking range. I made a dash for it between work sessions, and dipped. That'll be that I thought.

Friday, and a quick look around the garden before  a later than usual start to work produced the second tristis Chiffchaff of the season as well as a standard one. No news on the thrush. Bad news was that I'd missed a small, on-patch flock of Waxwings, I'd have driven past them a time or two as well.

Saturday morning and I checked the garden, the tristis had gone. Checked for the Waxwings, no sign. Went round Palace, and for the first time for ages no additions to the patch year list. 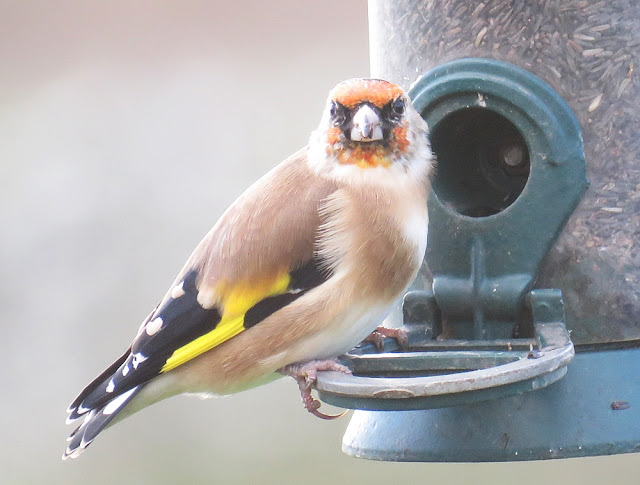 1.00p.m. phone call from the Black-throated Thrush land owner, the bird has been present all day and would I like to come along at 2.00p.m? Yes please.

2.00p.m. and I'm being waved down to the site, it is apparently in view. Park up, down the track and... it has gone. Some long minutes are then spent in the world's smallest birding hide wrestling with scope, camera and self to get comfy when there's a call it's in the stubble field. Rapidly extricating myself from the hide and legging it back up the track I get a few distant views using the scope. RM suggests we go down through his garden and sneak up on the bird which we do and over the course of the next 40 minutes or so I get excellent views and some passable pics. 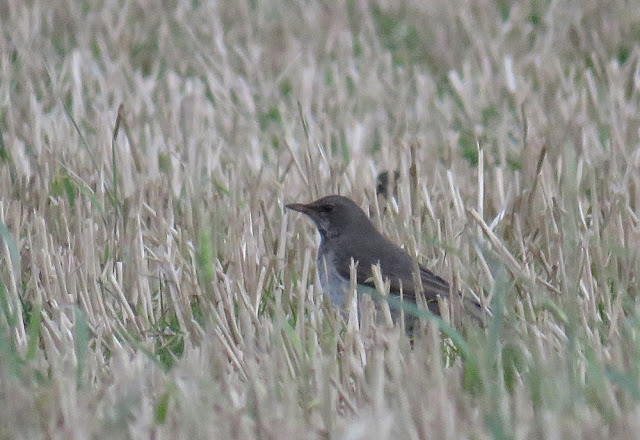 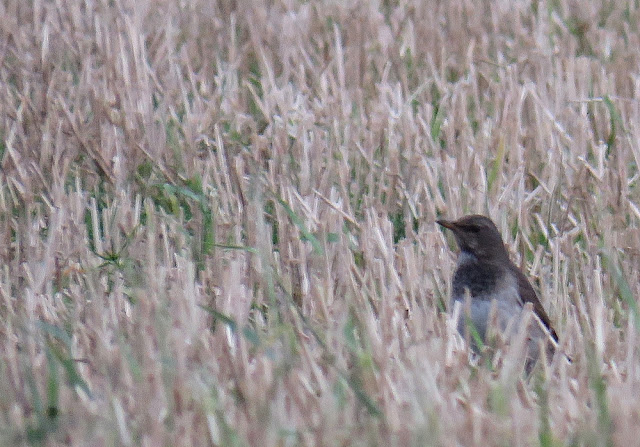 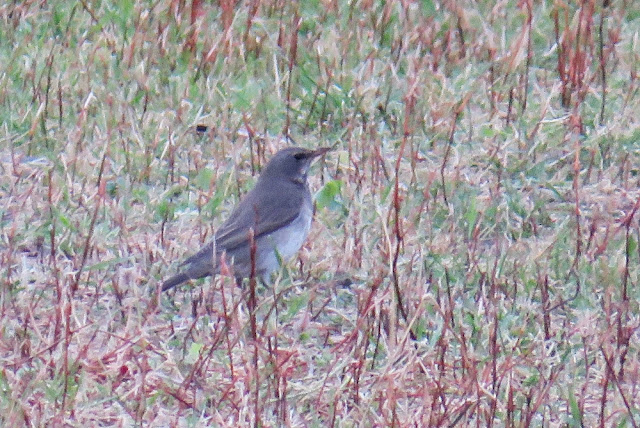 
Many thanks to RM for the shout and for leading us a tramp around his garden so that we could see and photograph the bird.

Ah! Got to scoot the light is failing and the Crane has been relocated....

...but it had moved on again by the time I got there. Anyway can't complain, nice bit of WeBS this morning which again produced a Little Egret at Loch of Sabiston (local rarity) along with a nice selection of quackers, including a very lost looking Long-tailed Duck.
Posted by Alastair at 2:42 pm No comments: 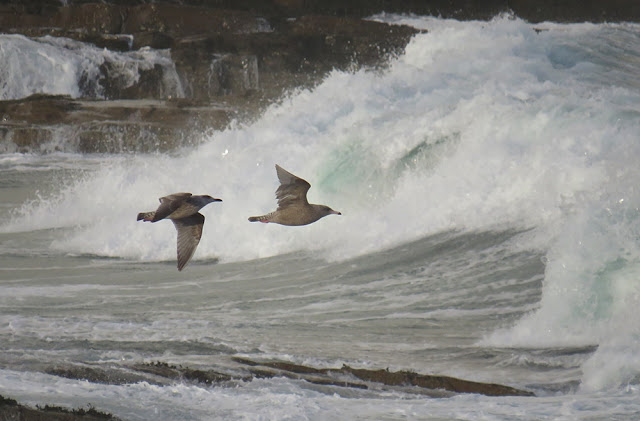 A sharp northerly, bit more than a breeze and a seawatch was required, both Papay and NRon have had some good birds from the sea of late.

Point of Buckquoy was no good as the car was rocking around like crazy so I tried walking out to the buildings on Northside, but the wind direction meant there was no shelter, well so as I could actually see the sea. In the end I parked by the fisherman's hut at the base of Skiba Geo. That is an odd sort of seawatch place but it worked, I had shelter and using the big scope I could see birds passing. There were a lot of birds passing, a stream of Fulmars amd a good few Gannets amongst them. A distant Sooty went by, then a close one, very nice. A Great Northern or two, then excellence, a year tick, 1cy Glaucous Gull. 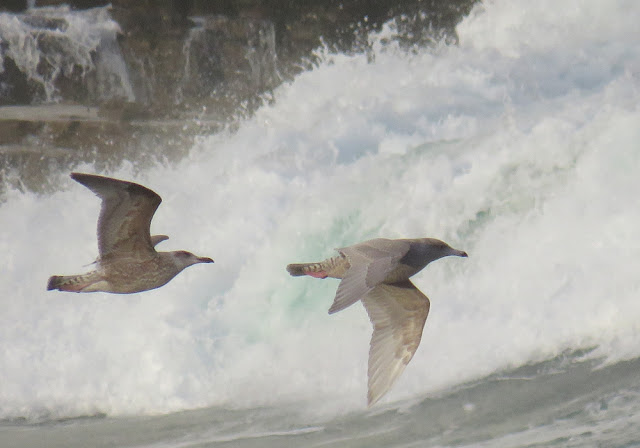 A tiny thing disappeared in the waves and then a while later another. They had to be Little Auks but the view just wasn't good enough. Twenty minutes later a whirring wee thing flew through the bay giving excellent views, brilliant!
Posted by Alastair at 6:23 pm 2 comments: