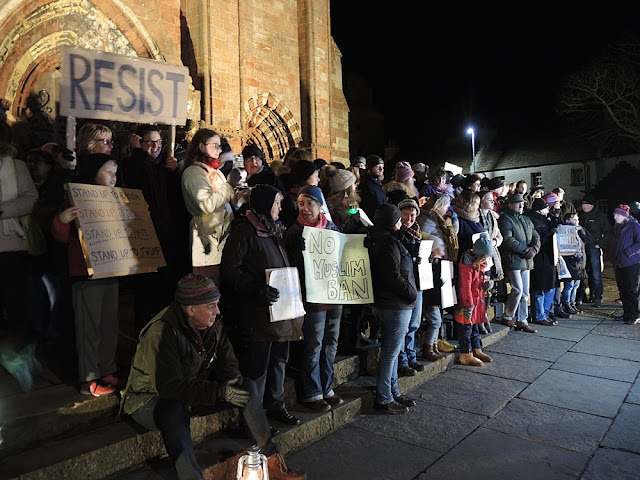 Bit of a tour round the West Mainland today after a no birding day yesterday. Lesser Scaup with Greater Scaup (2) and Tufties at Loch of Boardhouse. Then Loch of Clumly produced first the Crane and then the Ring-necked Duck. A search of Loch of Skaill didn't reveal the Black-necked Grebe or the Green-winged Teal but there was a 2cy Glaucous Gull (and 213 Barnacle Geese). The Loons and there were 65 Greenland White-fronts, at least four Short-eared Owls, two Hen Harriers and many thousands of Golden Plover. Loch of Sabitson and there was the Little Egret. However, three visits to Mill Dam of Rango and we somehow missed the Pallid Harrier which showed up at 12:35. 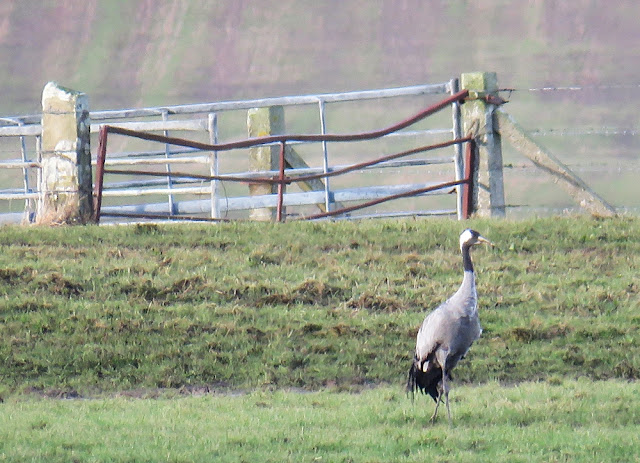 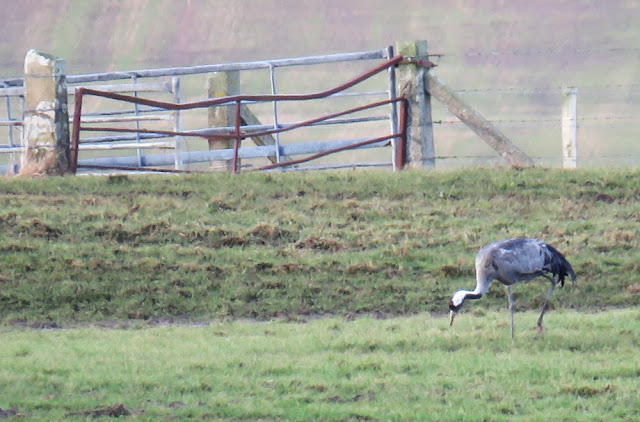 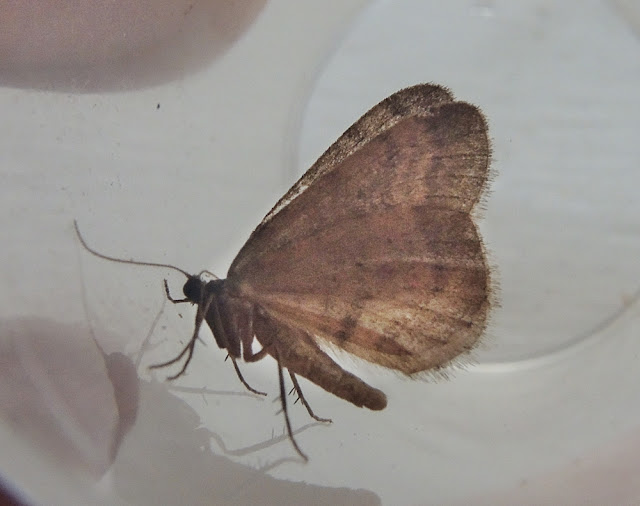 Winter Moth, found on the outside of the MV trap on Friday evening 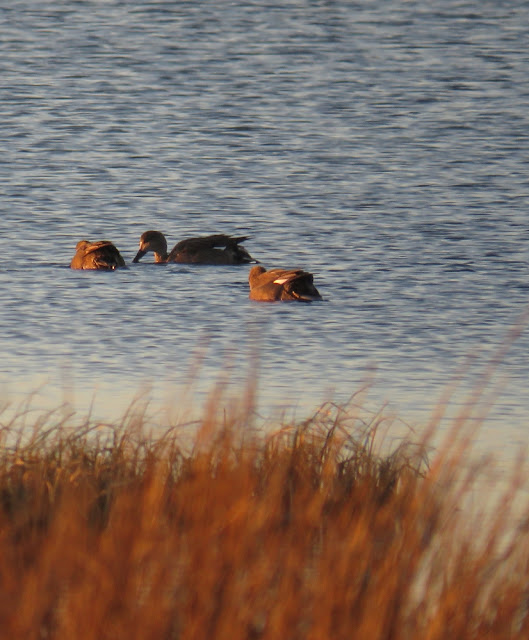 Gadwall building up on The Shunan 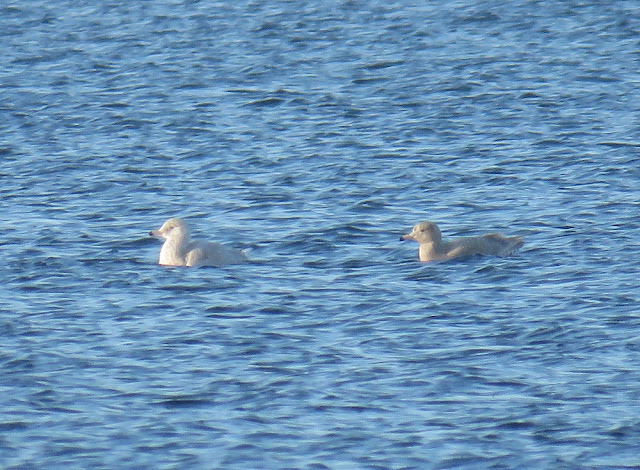 I've only certainly seen one Glaucous Gull on the home patch before so finding one on Loch of Harray was pleasing. It flew off, but then reappeared shortly with a friend. Despite the bill marking I think the left hand bird is a 3cy, it is very pale and appears to have a pale eye. I have had two possible Glaucous Gulls in addition to these, one of which I saw fly past the bathroom window whilst I was in the bath, no bins unfortunately, I'm not quite that obsessive. 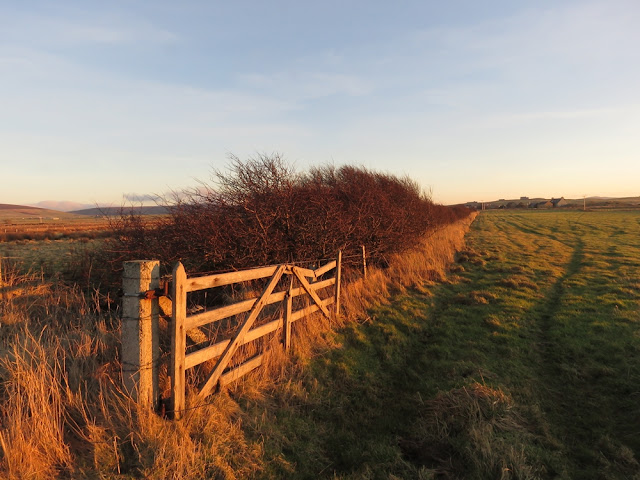 The ghastly stomach lurgy has finally caught up with me so a day at home regularly trotting through the house. In between these occasional episodes I've been entering data from last year in to iRecord. Hopefully this year, with new phone and apps to hand, this annual epic will be a thing of the past. I'm pretty good at keeping up with my bird records, and that is now so much easier with the Birdtrack app, but keeping up with all my insect records as well has been a bit beyond me. Thus the sweat to get all the data entered for the various recorders, some of whom are very keen that my data arrives shortly. (We won't even mention the mammal records...)

The blog looks a bit different as I've finally changed the background. I'm also working on the links to make sure they are all relevant. It's needed a bit of a refresh for a while.

Rather proud of my Patchwork Challenge effort for last year, the Palace patch really did the business with finds of Lesser Scaup, Olive-backed Pipit, Common Rosefinch and Yellow-browed Warbler to name a few. The home patch score was ok as well, plenty of Birdtrack full lists entered. In the end the patches accounted for 385 full lists and 10,090 records, good luck to the report writers... oh, beggar I do some of that. Recently wrestling with the new Patchwork Challenge website, well done to all concerned for getting it up there but it does have a few glitches, hopefully soon to be sorted out.

Here are pictures from last weekend. 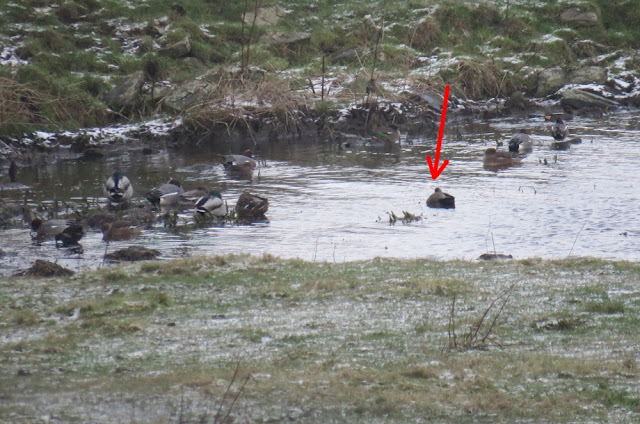 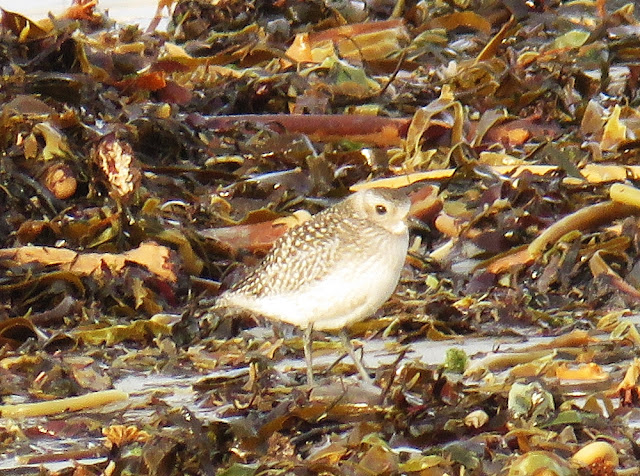 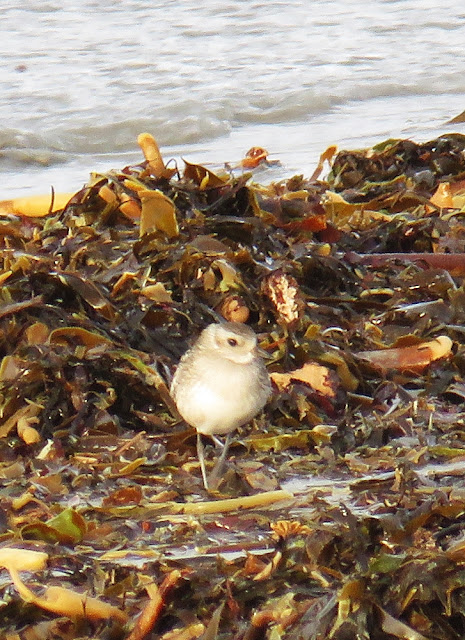 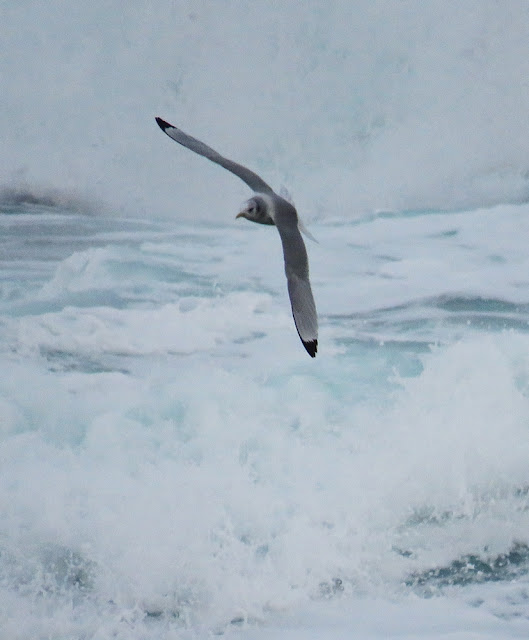 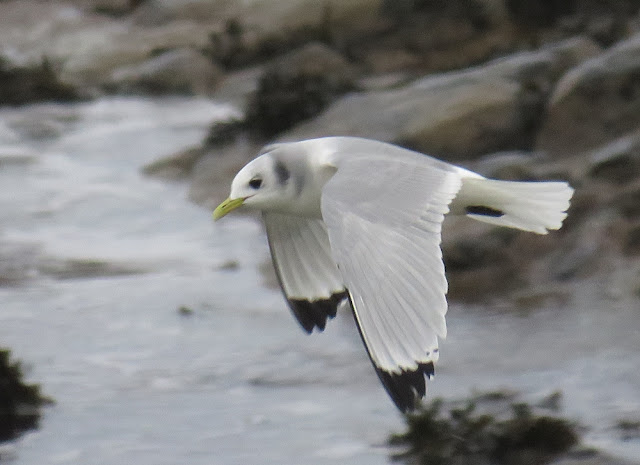 Kittiwake against the waves 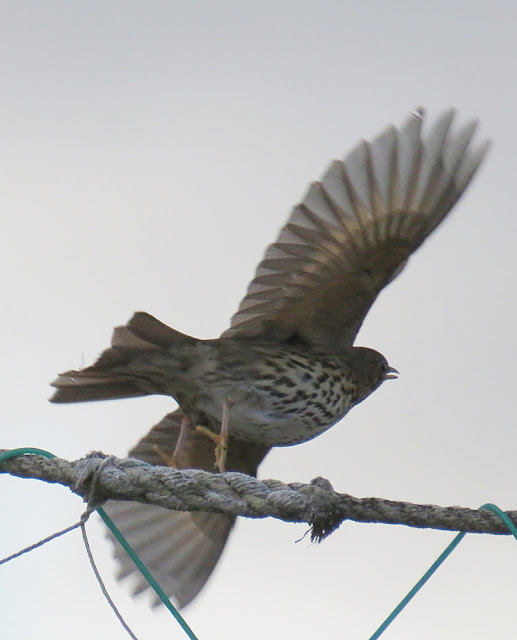 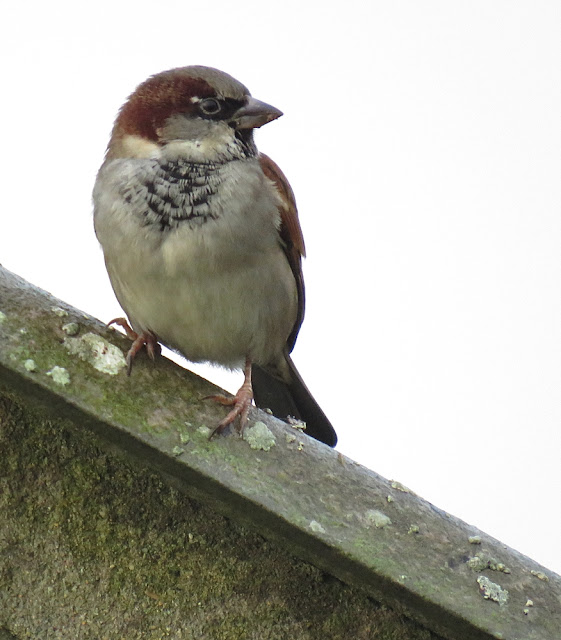 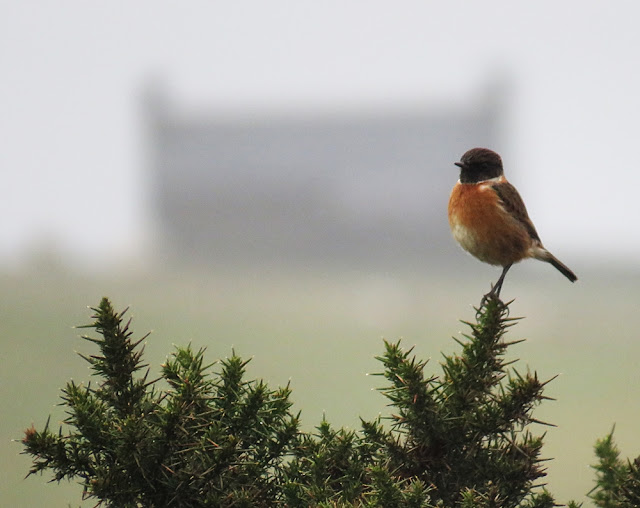 ...and images from the home patch

Before the New Year I went for a swim that I didn't intend or want... note to self the burn at Aikerness silts up so it might be a tad deeper than you expect.  I was giving elder daughter a piggyback across the burn at the time... who goes to the beach in Chelsea boots? I ask you... No witnesses and no pictures fortunately. The walk was cut very short and we both retreated to the car damp and shivery. (However, camera and phones survived so a tad wet and cold was the only damage.)

The weather was not great over the first few days of the New Year, and more windy weather is expected overnight and for the next couple of days, gusting 70mph is no fun with car and house doors.

Not that many photos I thought but I've managed to find a few, dull light is not great for wildlife photography, of the following I've pushed the iso and shutter speed to the limits to get anything approaching sharp and worthwhile, most ended up in the bin.

So there are no more pictures of the Lesser Scaup although I did manage to relocate it, and before anyone else as well, so there might be some additional Patchwork Challenge points, maybe... I did finally catch up with the Crane, thanks to PH for that one, miles away across the fields but nice enough.

The highlight has really been the WW gulls. All last year I hunted for Iceland Gull on the home patch, not even a likely suspect. Doing my good turn and taking Ellen to the ponies one morning and two gulls flew over the garden as we headed down to the gate, bit of a panic to grab the bins and avoid falling out of the car to get a view at a weird angle but a nice 2cy, a big one too. Then this last Sunday I had a quick stroll around Palace, mmm those gulls look rather white... a walker on the beach flushed them (PM that was you and your bag of egg cases, you missed a bit of a treat I'd have shown you if you continued up the beach) and I had a bit of a panic making sure I saw them all, five Glaucous - ad, 4cy, 3cy, 3cy, 2cy I reckoned - and the Ice was 4cy I think (I may yet change my mind about that one,need to check the references, think that's right enough). 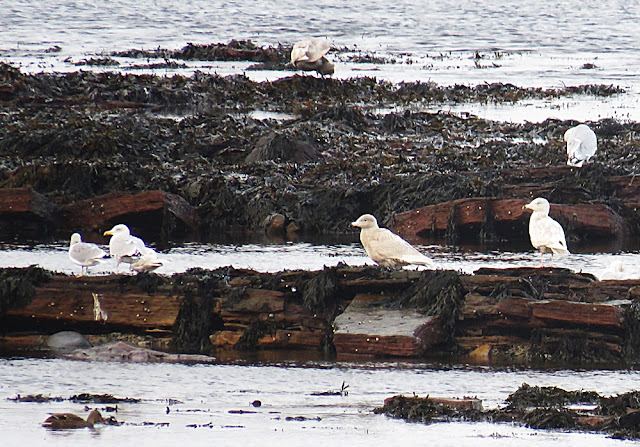 Bit distant here but the Ice is tucked behind the Herring Gull, then Glaucous 2cy, next one is a 4cy maybe, the one at the back in the middle is a 3cy I reckon.

GB-bG 2cy, Glaucous 2cy, 3cy and 4cy, then adult GB-bG, the adult Glaucous is off to the right I seem to have missed photographing that. 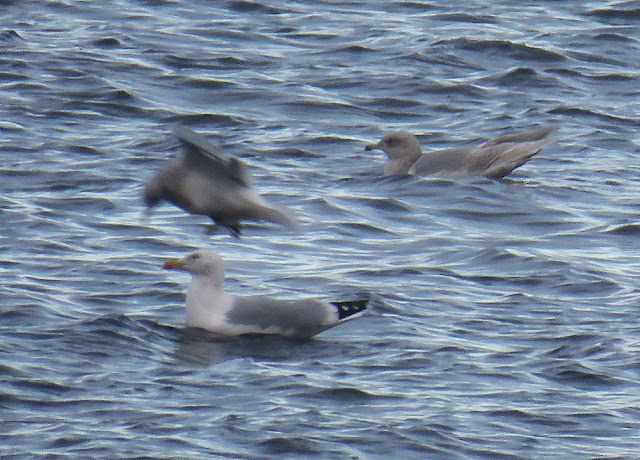 Not the best picture of the Ice, 4cy I would reckon

Added to this bonanza was a sneeky Dunnock (very uncommon at Palace) that retreated under a car before I could get a photo, and this rather nice Stonechat. 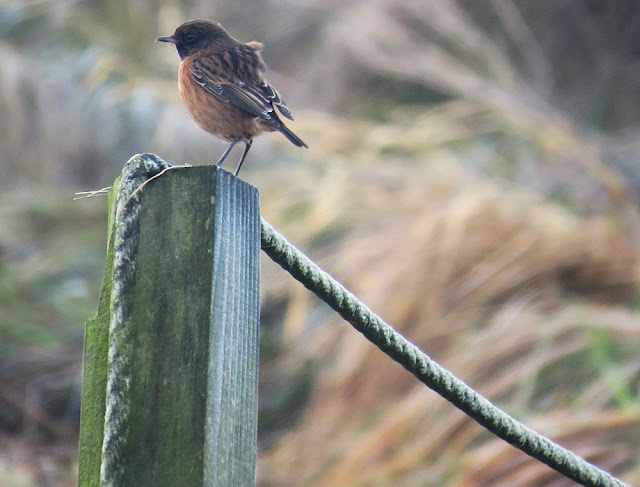 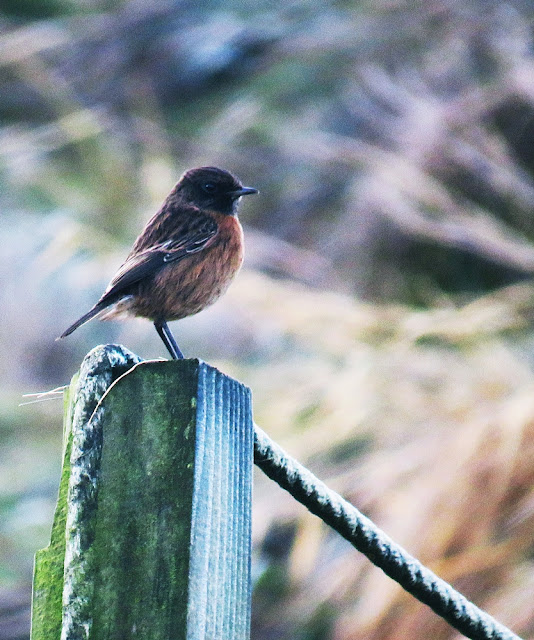 Six Meadow Pipits and a Skylark were not so usual at this time of year. More expected (and photographed at Northside a few days earlier a Rockit). 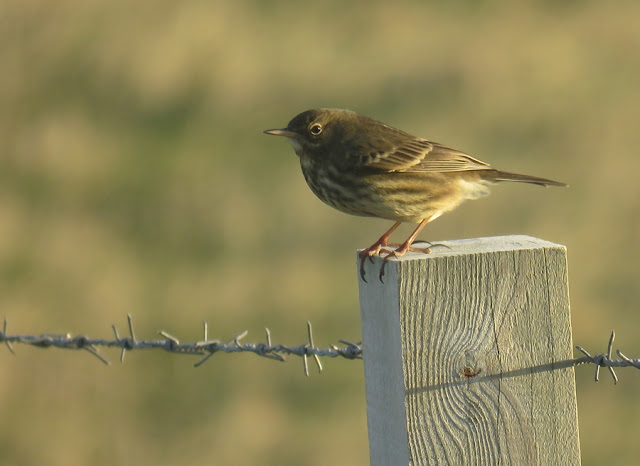 Here are some more pictures from Northside in the first few days of the year. 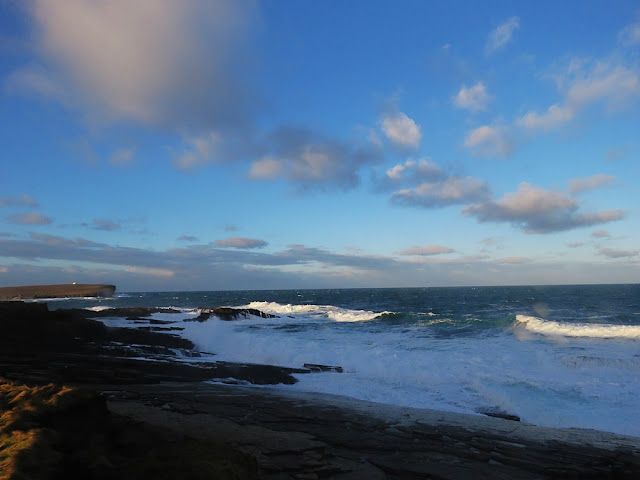 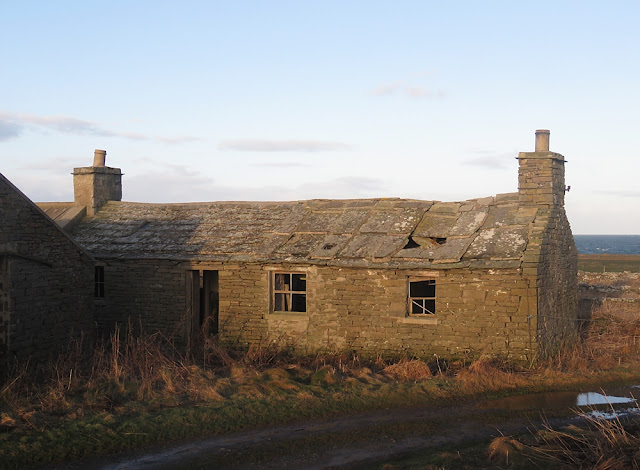 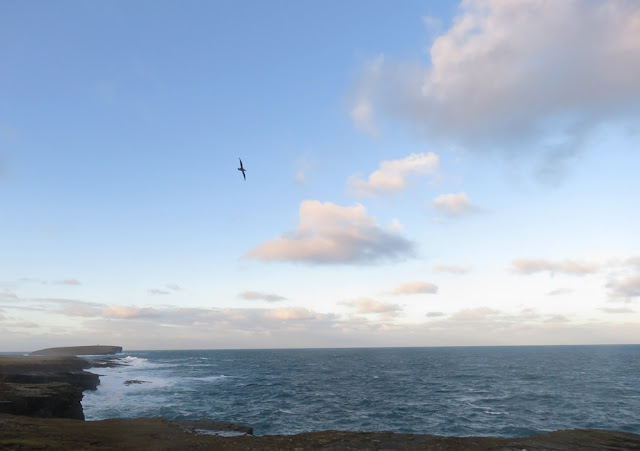 Fulmar (about this time someone was seeing a Black-browed Albatross over on the East Mainland at Rerwick, I would rather like it to pay Northside a visit, please - ideally when I'm there...)

Here are some pictures from the home patch too, some of these are quite heavily processed in the software, adding a bit of drama.... (also known as cheating). 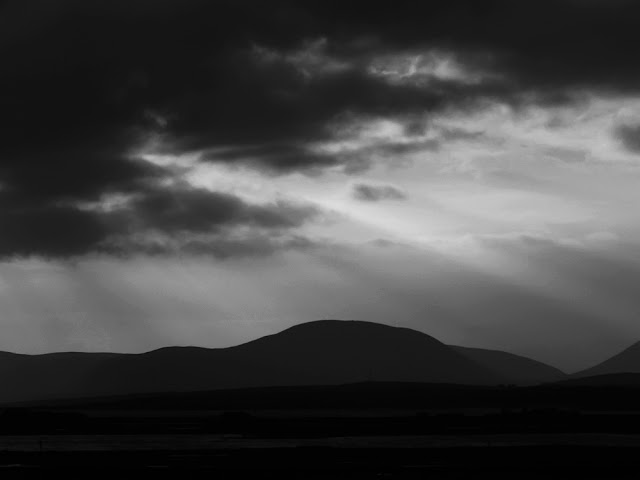 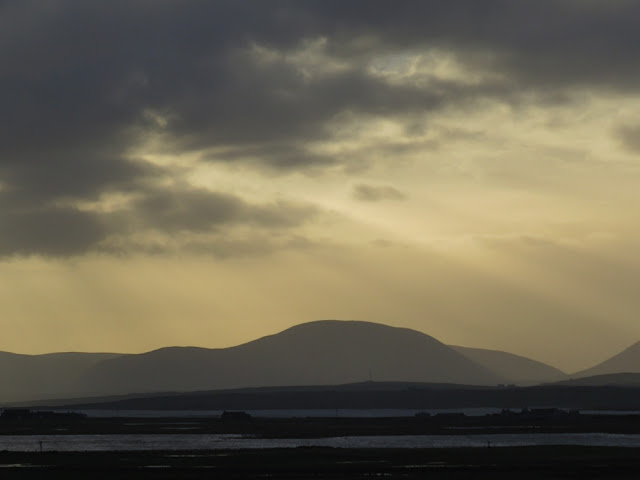 I can't quite make up my mind if I prefer this image in colour or b&w, sometimes colour is best when there isn't much of it. 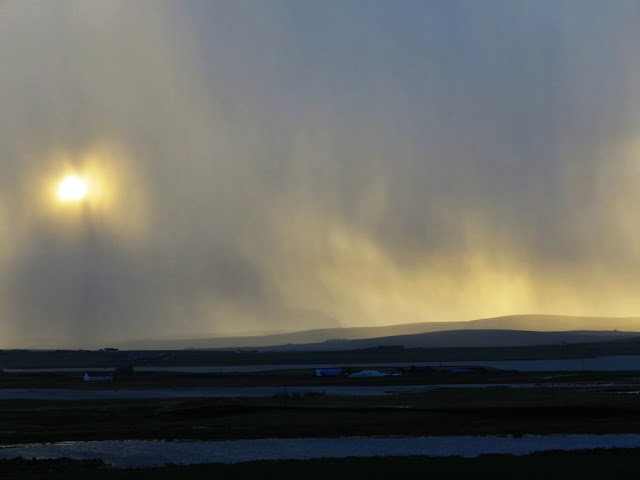 Lots of duck on Loch of Bosquoy and The Shunan, including a very nice Goosander but try as I might I couldn't find a Green-winged Teal. 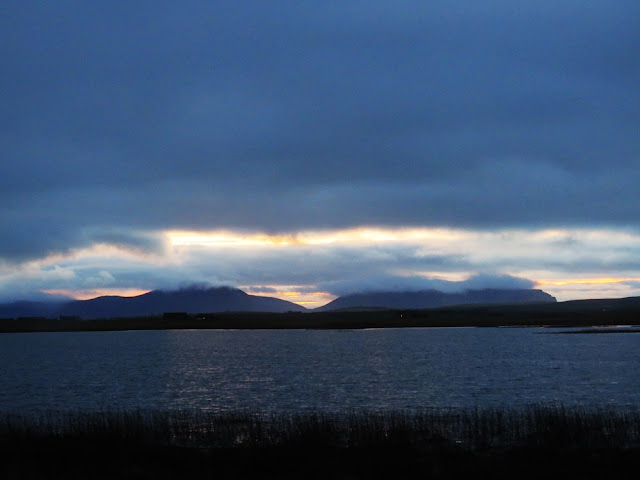 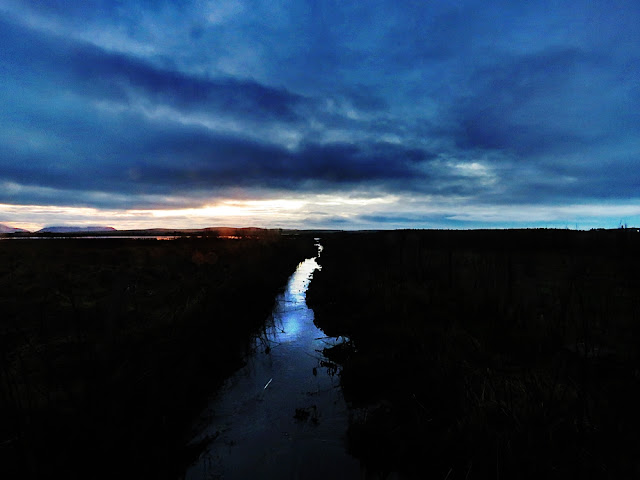