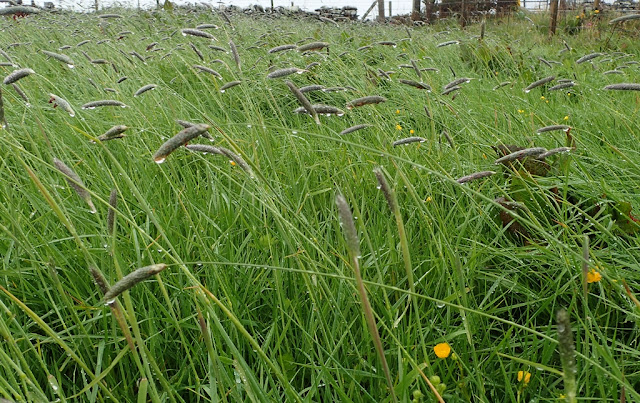 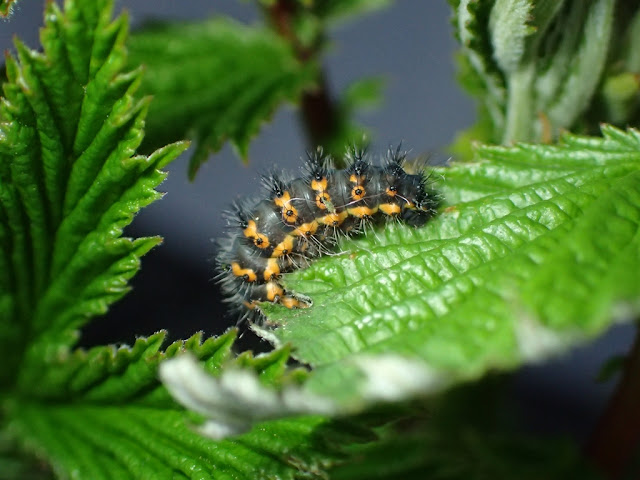 Long-finned Pilot Whales near Kirkwall, Orkney. Unfortunately it is thought one of these animals is injured, thus the behaviour. If you listen carefully above the wind noise and Oystercatchers you can hear them blowing. 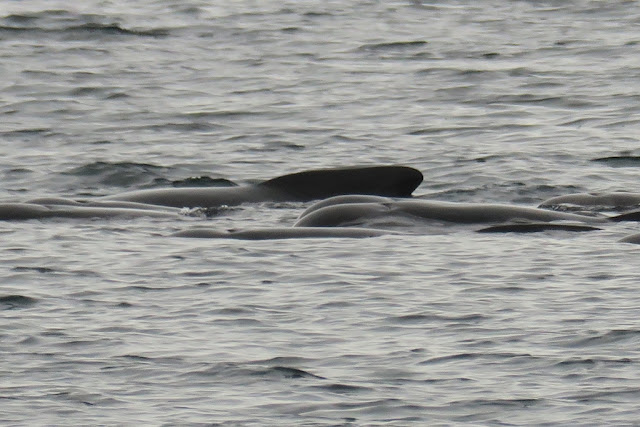 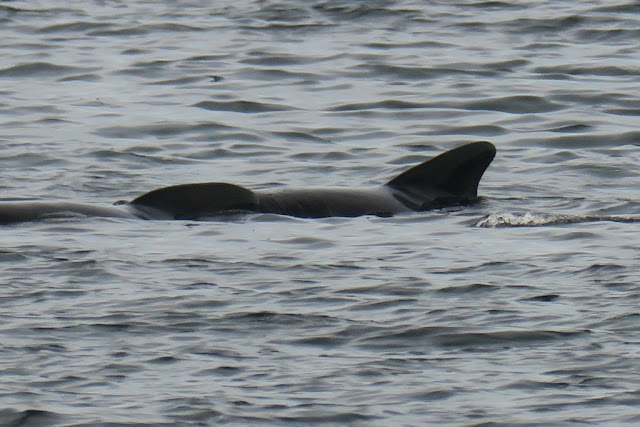 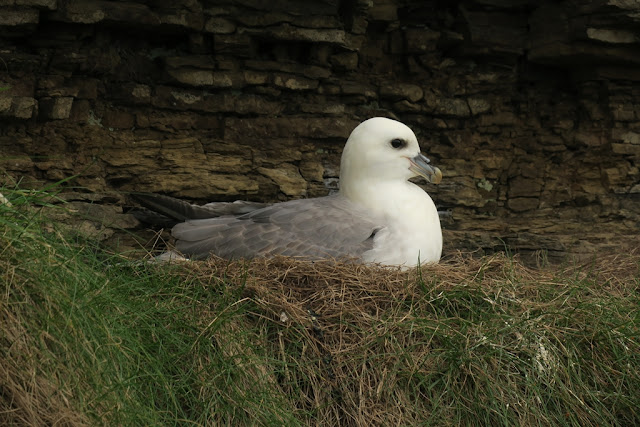 Spectator
Posted by Alastair at 11:30 pm No comments:

It rained yesterday, I can't remember when it last did that here. I'd turned the MV off when I went to bed but left the two actinics going and they produced new moths for the year. 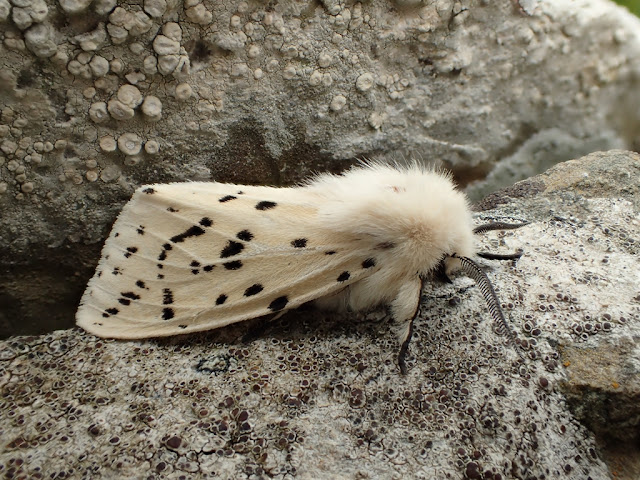 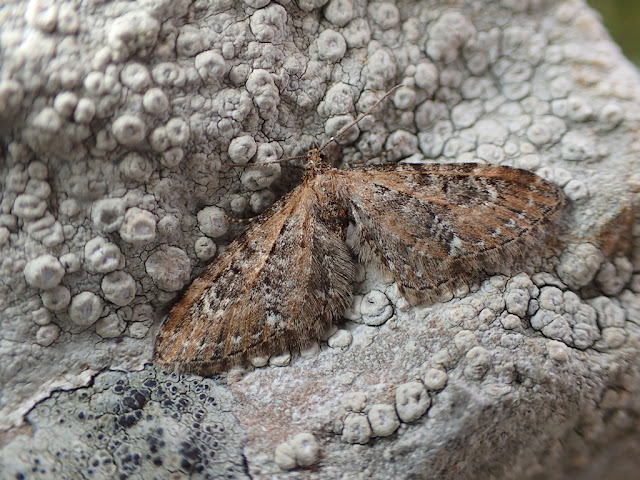 The moth traps also included some invaders including a few Tipula oleracea, the Empid, Empis stercorea and two species of caddis, Stenyphylax pernistus, but there was another one as well which I need to try and key out.

I have a pile of beetles to key out, the wet weather was not encouraging for searching in poo but I did have a brief poke around at Birsay Links where there were at least three different Aphodians. There were some huge larvae in the poo as well so I suspect a more thorough search might produce a Geotrupes, the weather is supposed to cheer up this afternoon, thick mist at the moment.
Posted by Alastair at 9:43 pm No comments:

I'd offered to help at a bio-blitz tomorrow afternoon but it's been cancelled. Pleased because what I'd really like to do is head for the poo fields on the coast and have a delve about. Last weekend we went here: 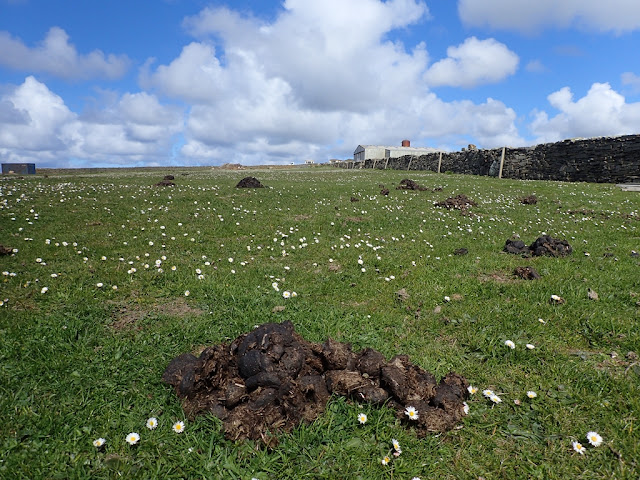 And amongst the many Aphodius depressus and sphecalatus/prodromus (I'm still not sure about these) there was a single Aphodius lapponum, NFM, dead chuffed. (It took a bit of work to key it out though.) 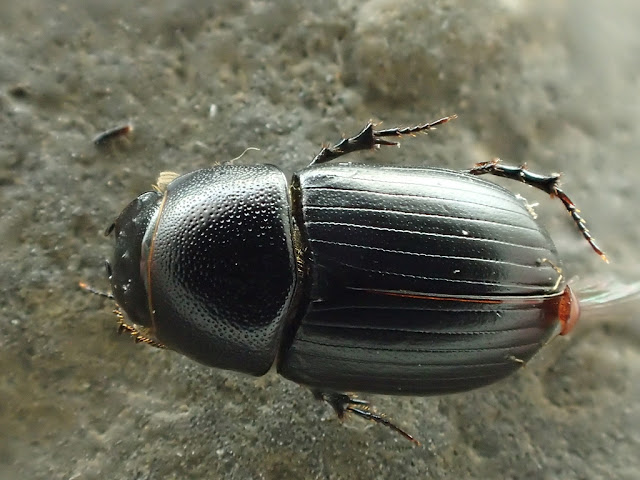 Agrolinus lapponum (more taxonomic jiggery going on). The orange thing on the end of the elytra is a parasitic mite.

Also during the week a photo was posted on FB of a large dung beetle on Westray. After a bit of help and (a little controversy perhaps) an ID of Geotrupes stercorarius was made. I'd not realised that any Dor Beetles occurred here so I was a bit amazed. Then I was informed there was a 1901 record and five or six more recent ones and quite a wide variety of sites (all the same recorder - no not the 1901 one -  who clearly has the knack for, and determination to, search for and find these). I'm quite surprised one hasn't come to light here or been found in poo I've been digging around in - but I'm on a mission now...

The moth trap yielded a Dark Sword-grass in the week. And we're all lit up this evening with three traps running. Just out now to check the MV.

Managed to get away from work in order to twitch today's Woodchat on the industrial estate at Hatston late afternoon. Whilst I've seen loads abroad, and one in Ireland, I'd always dipped previously in UK. The light was a bit rubbish and I couldn't get the mantle colour but I think this was an adult female. 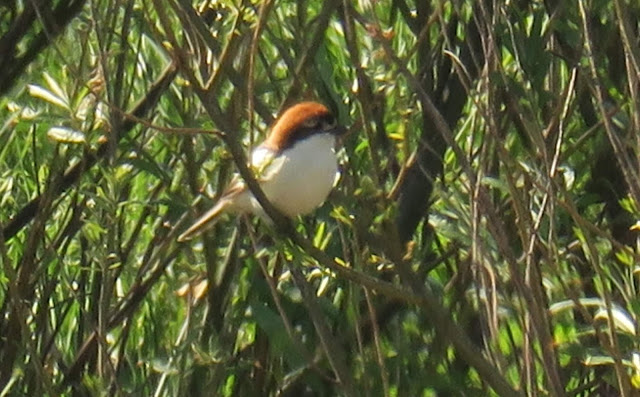 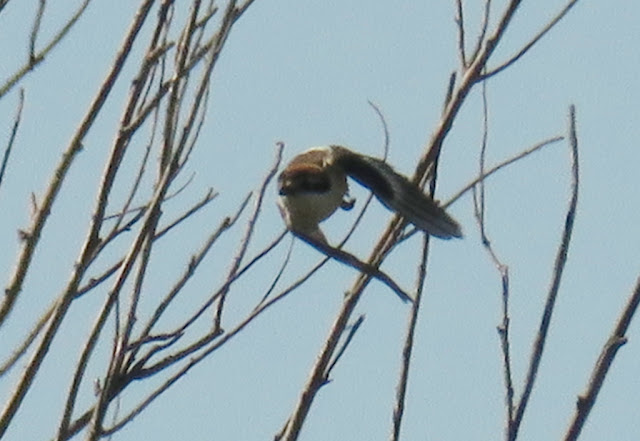 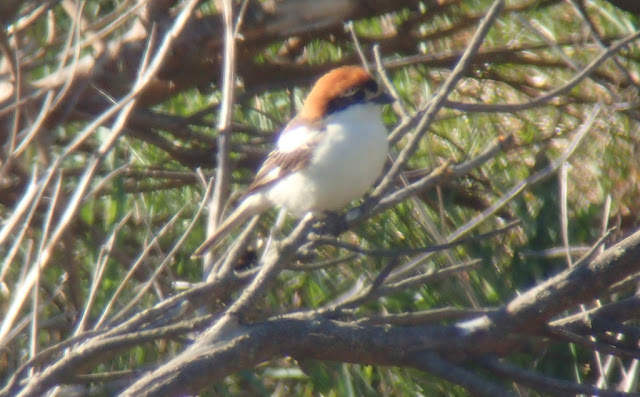 The primary patch is easy to see so race senator.

Top image Canon but other two digiscoped.
Posted by Alastair at 12:06 am No comments:

Tree Spugs and other things

It's been cold and finding insects, especially hoverflies has been hard work. I've not had the moth traps out for a while and trying the night before last I caught only Hebrew Character, wait for warmer weather.

Right on cue on 1st May the Tree Spugs arrived and this year there have been a pile of them and they've stayed around. Maximum flock size has been 14 (recorded once) and 13 on one other occasion a week or so later. It may be that they left last night as none so far today, just when an attempt was to be made to ring some... so it goes. (They did return, or new ones arrived and one was present on Sunday and two on Monday.) 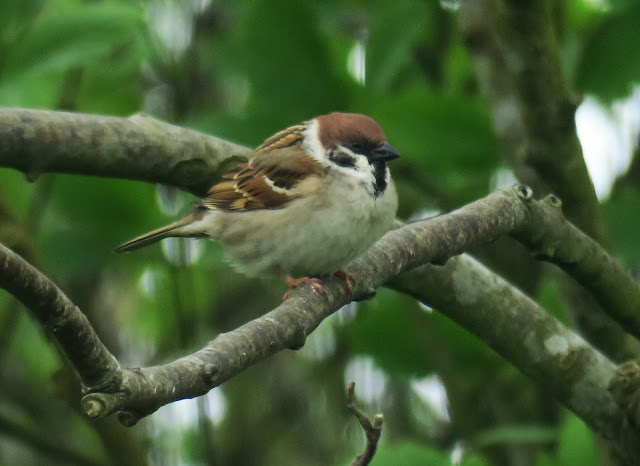 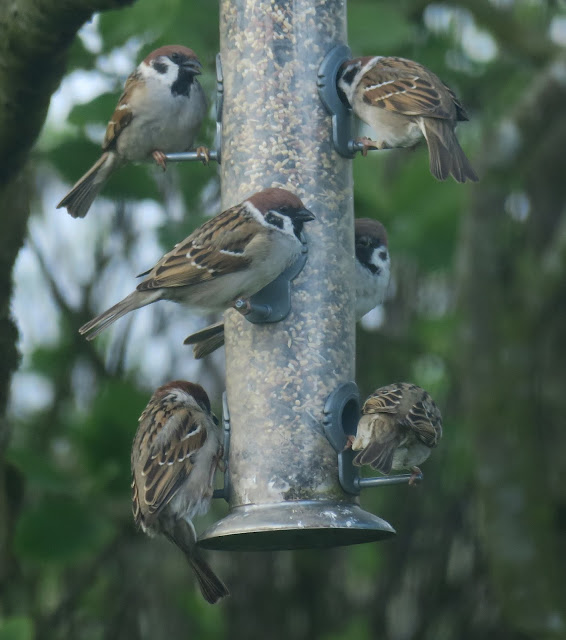 And here's the info about their occurence since 2014. Prior to that we had a single long-staying individual that remained for the best part of three years having arrived one May. 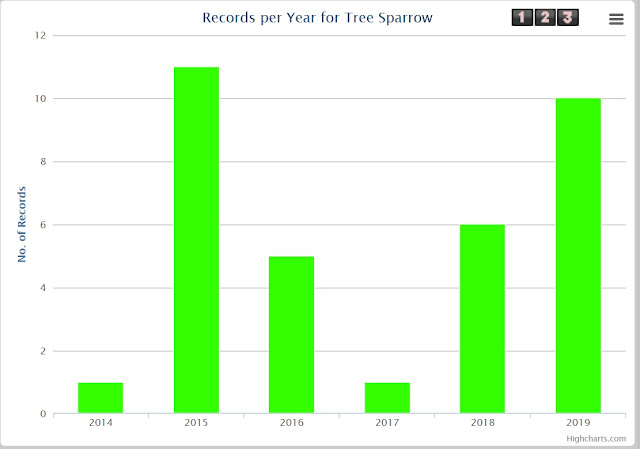 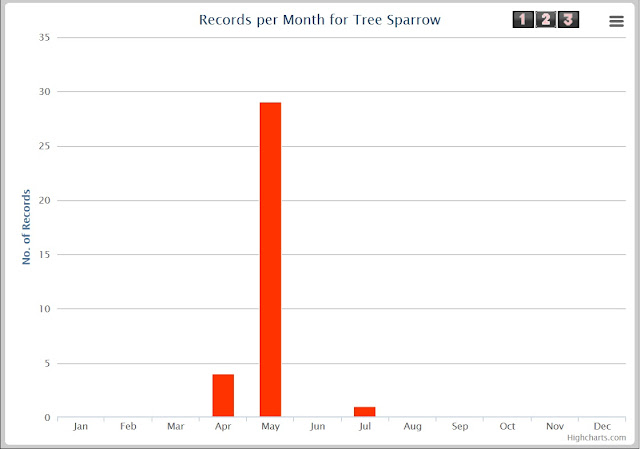 Insect stuff to post later, including a very exciting beetle...

I'd put a water bucket in the pony field as when I went down to feed Blue during the wedding we went to he and Google had wrecked the electric fences and they were both in the one field with G apparently guarding the water. Three days later when things were sorted out I went to bring the bucket in and there was a Carabid in the bucket, sitting above the water, I stuck it in a pot. When I looked at this beast I was puzzled  it looked like a big Loricera pilicornis with no antennal hairs and I couldn't recall anything that looked like that. It sat in a pot for a week before I paid it due attention, it still puzzled me. Not surprising as it turned out to be Pelophila borealis, a Shetland/Orkney speciality with just a very few records elsewhere in Scotland and a record from Wales. 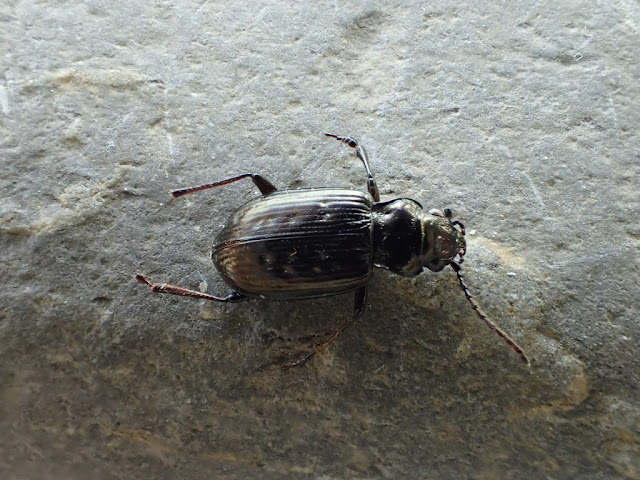 Somewhat damaged from my hauling it through the keys. 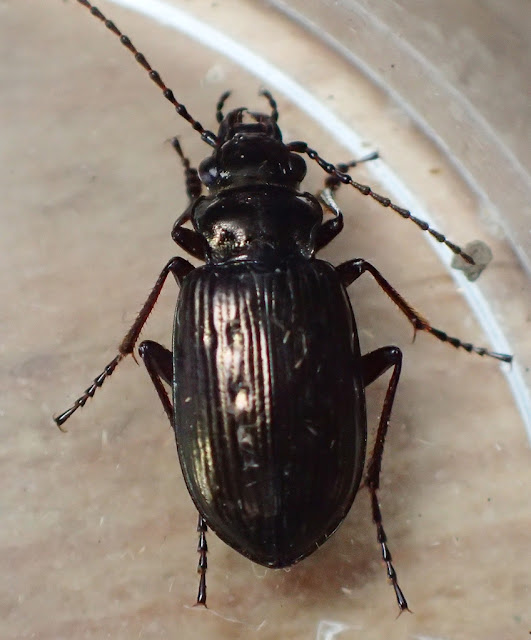 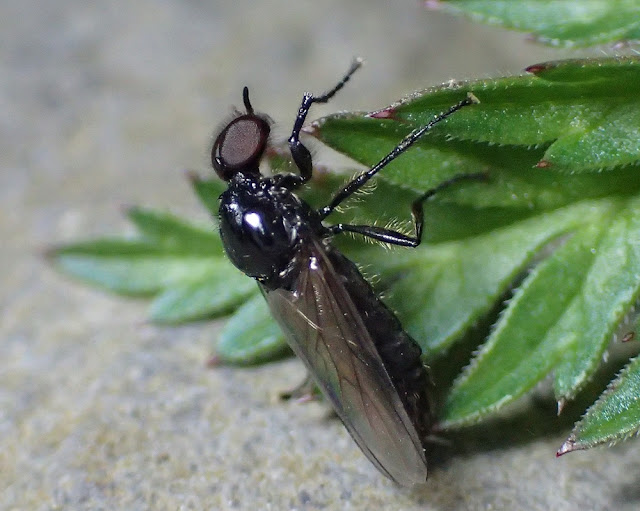 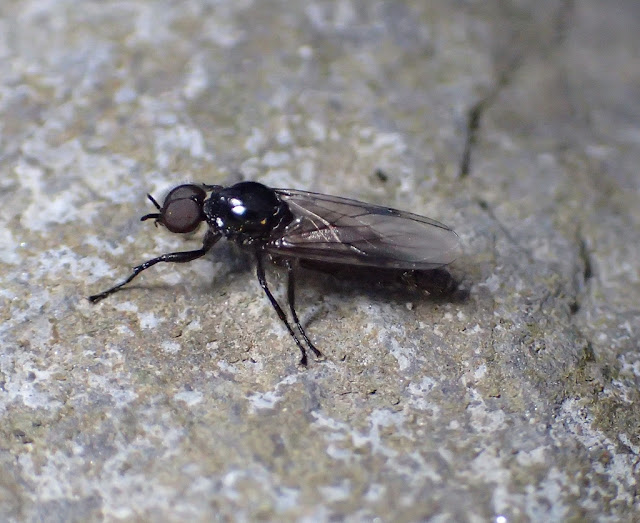 
Millions of this fly have been massing.