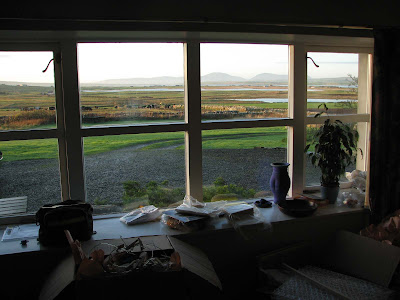 View from the kitchen this very morn 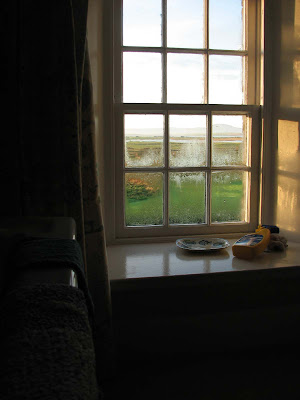 Supervision duties meant I spent half an hour or so outside this morning. A swirling flock of 30 or so Starling indicated something was up and so it was for them as a Sparrowhawk flap,flap glided away across the neighbouring field. A familiar croaking offered a Raven but then moments later an interesting shape was confirmed as a male Hen Harrier.

Earlier on the way down to work and around the house 12 or so Fieldfares were complimented by 100 or so Redwing by The Shunan. A Robin was singing on the fence of the garden with a second nearby and Blackbirds were skulking around and about (4). Plenty of Snipe and a couple of hundred Teal were also by the Shunan and just 25 Pinkies flew over.
Posted by Alastair at 11:14 pm No comments:

The other major debacle of the moving in scenario was the do with Granny's sofa. Granny's sofa would not go through the door to the room where we wanted it to live. Much huffing and puffing and pushing and shoving proved ineffective. After some discussion it was decided that without the legs it might be persuaded to enter the room. However, unlike modern sofas Granny's sofa's legs are integral, inseparable from the whole; well they were. A swift rummage amongst the luggage and the fret saw was found and the legs were carefully amputated. Right sofa, through the door you go, er, not.

Granny's sofa now resides in the kitchen where if you sit on it it wobbles, a wobbly sofa. 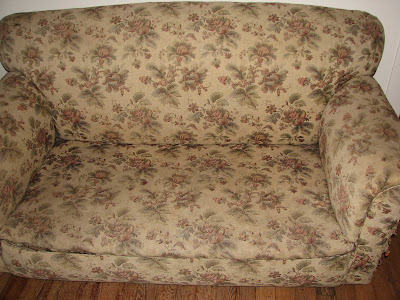 Granny's legless sofa
Louise was despatched to the local hardware store today where various glues and other mending items were purchased or borrowed, restoration is likely to be a trickier feat than amputation, methinks.

No birds today, lovely weather but work insisted. Common Gulls and two Herring Gulls on the school field were all I could manage. Louise reported that the local House Sparrow population has discovered the garden feeders, Pine Grosbeak, get thee hither. 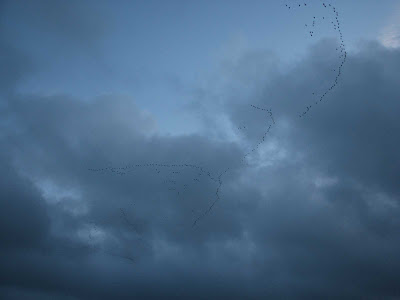 Pinkies from Saturday
Posted by Alastair at 11:15 pm 2 comments:

Have moved in to the new (old) house. Family had rather grim crossing
with much wailing and failing to maintain contents of stomach.
Huge piles of boxes all around the house and much muttering of where
is this and that. Opened the kidney beans ingredient for supper with a
hammer and chisel.

Piles of Redwing and Fieldfare around the house and down by The Shunan
with a good scattering of Blackbirds - 6 on the back lawn on a couple
of occasions.

500 Pinkies over the house on a couple of mornings and a quick nip to
Birsay produced a gang of Purps. However birding very limited due to
boxes.

Worst moment on waking this morning to damp feet, calling Louise to
discover one of the cats had just peed on the bed, cat now a ginger
hat and cosy pair of gloves. (Note to humourless critter rights crew,
that was a joke.)

Posted by Alastair at 7:34 pm No comments:

6.5 hours of MIAOW MIAOW didn't drive me quite mad but close. Soon
enough we'll be on the ferry and I'll be pleased to escape this very
smelly vehicle. The hamster has been climbing the bars and the fish
losing water but so far everyone has survived. More birds arriving on
new home, R-bF, another AMG, juv Rosy Starling and various Barred and
Y-b Warblers, hopefully have time to look for some things later in the
week.

Posted by Alastair at 2:56 pm No comments:

Frank turned up again yesterday at Mill Sands, he's prooving to be an elusive fellow. I do have a suspicion that he has a nice cosy chicken coup to dwell in, venturing further afield when I'm well out of the way - at present in Yorkshire.

A nice selection of birds I've not seen for a couple of months here. Little Owl evaded me yesterday but Bullfinch was calling today, dipped Treeper but have seen most of the other locally common things.

Birds have been moving through here all week with Redwings morning and late evening with a sprinkling of Fieldfare. No huge numbers of either though. Reports of a big flock of Pinkies through earlyish this morning.

Highlight of the day though was Ellen managing to ride her bike.

Posted by Alastair at 9:10 pm No comments:

The residence being somewhat north of VC62 I have today resigned as the recorder. There is a certain masochistic streak in me which will miss the hours of delving through huge lists of single figure Black-headed Gull records, or maybe not.
Posted by Alastair at 7:32 pm No comments:

Being temporarily back in Yorkshire I can post pictures again. This unfortunate glitch will soon be sorted out northwards as well, Zen and BT permitting. I'll add the pictures to the old posts I think. The only pictures I don't seem to have brought along with me are the Y-b Warbler and the weird acredula with orange legs and feet.

Nipped down to Filey for sentimental reasons on Sunday and managed to glimpse a Firecrest, a species I haven't seen for a while. Whilst looking for (mostly) and at the Firecrest I was pretty sure I could hear Y-bWarbler calling, but slightly confusing Goldfinch whittering was going on all the time so I might have been mistaken. 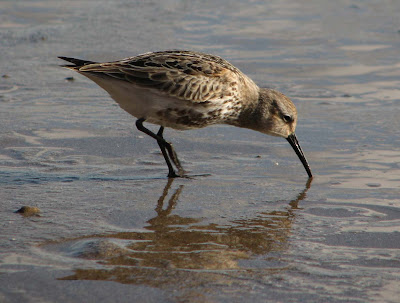 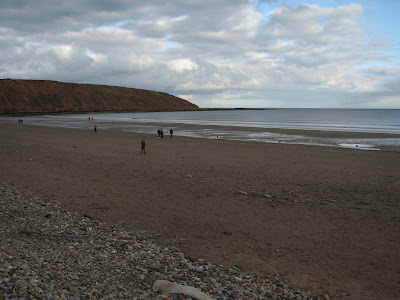 On returning from Filey N&S turned up at the house bearing a curry. This was gratefully devoured with accompanying beers and wines. We then ventured outside in the dark to admire the new mobile bird observatory. Looks like somebody's self-found list is likely to accelerate in the not so distant future.

I've got that nervous feeling ....

Having driven Sooth through the night I know it's only a matter of time before the next mega is found. High over Scandi, good old easterly all yesterday - "Go Paul go!"
Posted by Alastair at 6:22 pm No comments:

Friday afternoon saw me out of a meeting and over to the Langskaill Plantation on East Mainland playing my usual game of dipping. I may have seen vireo leaf movement, or I may not but the first of three serious attempts to see this bird ended in a cold, dank trudge back to the car.

Saturday seawatch produced three lovely Soots winging past Birsay. But then when I got home I found that (SW I presume) had clocked 33, 5 Leach's and a couple of Grey Phals. Well that's one theory blown out of the water. An evening return produced nothing more. A repeat effort the next morning did find me seeing 4 Great Northerns and an Arctic Skua. A nip up the coast soon explained why Whitaloo might be a better bet, that bit of height made the difference.

Sunday afternoon and what to do, dip of course, three attempts and three failures for the vireo, I even failed to see the Yellow-browed there. However, chin up Orkney ticks of Chaffinch and Goldcrest. What to do next? Homage to the juvvy AGP which was showing well then into the quarry garden where there was a rather odd acredula Willow Warbler (bright orange feet and legs) and another Orkney tick Pied Fly. Feeling a bit better I headed for the bushes at Sandside and bingo Yellow-browed, now I felt much better.

At the end of the day on Monday I felt like some fresh air and the text news indicated Birsay was a good destination. EM and I trudged the beach rather dejectedly until he had to leave. Feeling another dip was coming on I redoubled my effort and bingo! Initial distant views turned into a rather excellent half hour close range grilling, albeit virtually in the dark by the end, of a Spotted Sandpiper.

First thing this morning and further American possibilities with the report of a putative Epidonax flycatcher over on Burray but work beckoned ... it had disappeared in any case.

Posted by Alastair at 5:52 pm No comments: 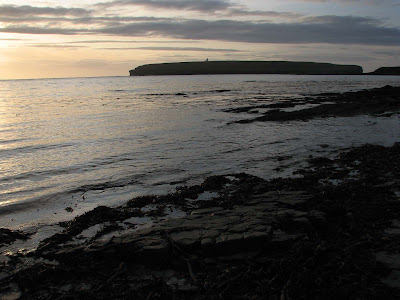 My new local patch
Now it seems that my theory about where to watch at Birsay may have
been scuppered or I was too early or I shouldn't have spent at least
half my time checking gulls at my feet. Any way I seem to have missed
a fair few birds this a.m. A further attempt for the vireo was in
vain. Ah! But I did secure two Orkney ticks Chaffinch and Goldcrest.
There's always tomorrow and a NW wind.

Too much south in today's blow but three Sooty Shearwaters and Fulmar's motoring though at 1,400 an hour at one point. Probably try again later.
Posted by Alastair at 1:48 pm No comments: 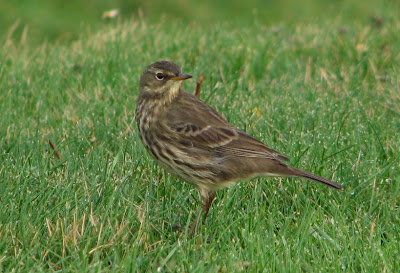 Birsay Rockit
The same Great Northern (maybe) went west this morning as yesterday,
same time to the minute but maybe a bit more distant. Few Fulmars and
a good few Kitts and three Arctic Skuas an adult and two juvs just as
yesterday. There were a few passerines out at sea today, dots though
but one of the skuas had a very good try at catching one.

In Kirkwall again but today the buzz on the BBerry was PH finding a
Red-eyed Vireo. When I was free to twitch it the rain and wind had
started and although there were a couple of brief sightings whilst I
was there I failed to connect. So it goes. Tomorrow looks better for
the sea than twitching passerines, Sunday maybe ...

Posted by Alastair at 8:40 pm No comments: