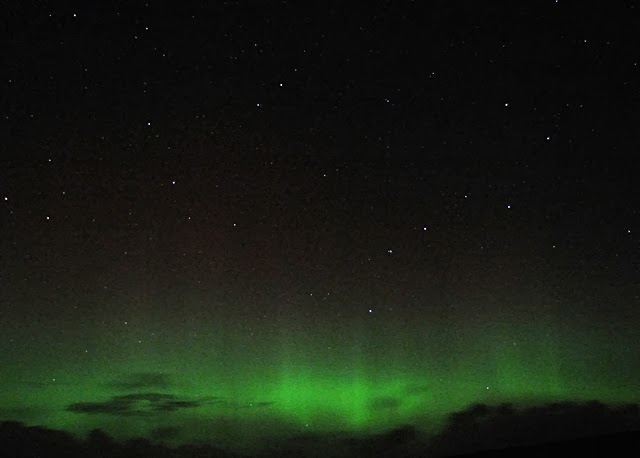 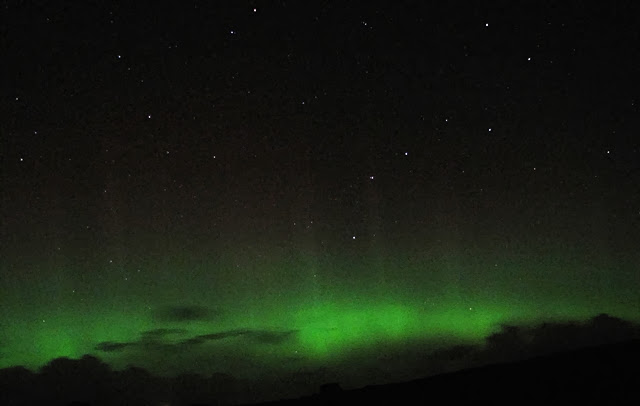 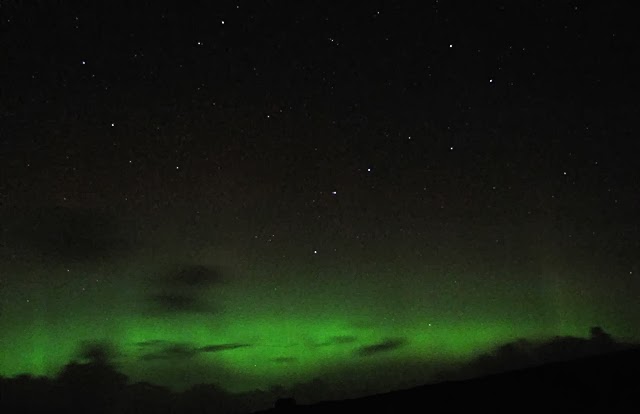 From behind our house tonight, excellent!!!
Posted by Alastair at 12:58 am 2 comments:

Louise phoned me at work and then mentioned she'd just seen a rather interesting looking wheatear down by our ponies. I asked her to nip back with my camera and blast off a few shots so that we could nail the id, and to leave the camera in the tack room. The ponies are in fields about half a mile from work so at lunchtime I nipped down there for a quick look. I found the wheatear in about two minutes and the photos certainly nail the id. 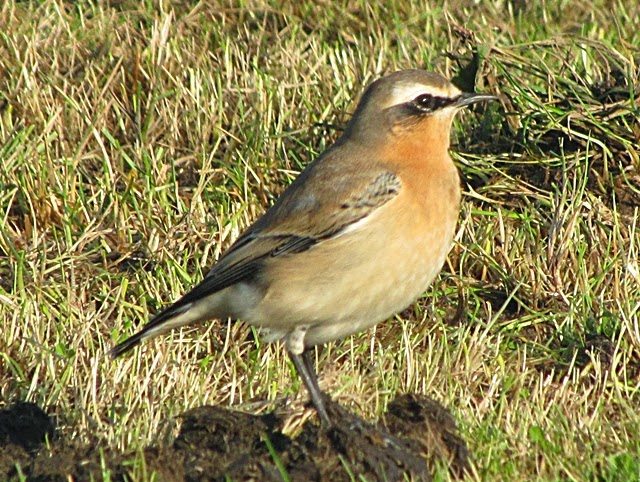 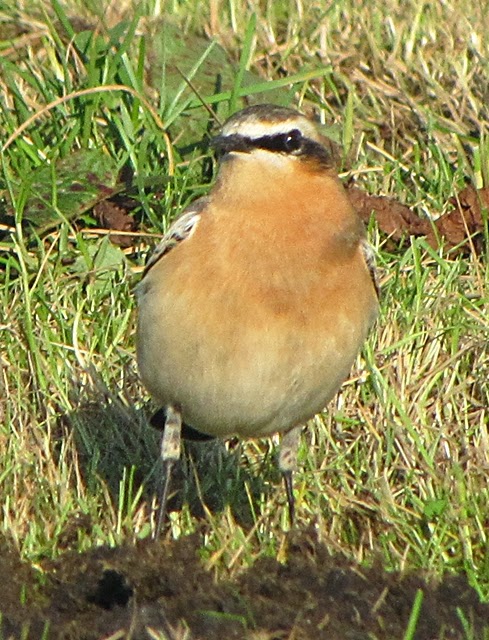 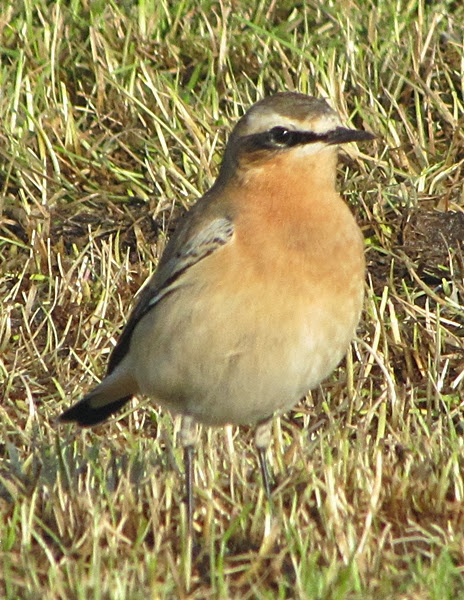 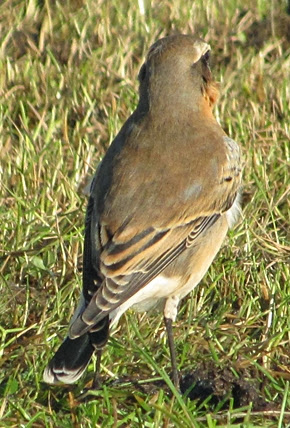 Pot bellied, short-looking tail, long primaries, rich red/brown breast extending to the flanks and towards the lower belly, black tail with black extending to a broad black band, strong supercilium, rich brown in the mantle and back, clearly showing six primary tips, the seventh is just (I think) peeking out from the tertials. Anyone disagree? Any other useful criteria?

My holiday has involved a fair bit of flogging the patches, initially for little return. A family holiday couple of days to North Ronaldsay was good fun with some good birding too. Then today, a glorious autumn day with great home patch birding, adding a species to the list even.

North Ron highlight was finding a Great Grey Shrike, a team effort as Louise who was about 200 m up the road found it independently and simultaneously, also over the two days, Richard's Pipit, tristis Chiff x2, Long-eared owl in the field and in the  hand, Black Redstart, Wood Sand and a spectacular fall of thrushes. 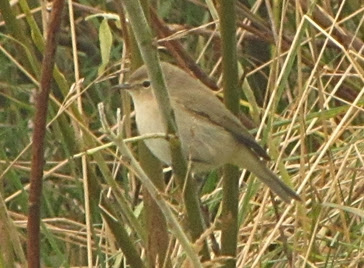 All black bill, black legs and feet, no greenish hews in the plumage, black alula all look good for tristis. No calling unfortunately Colours in the photo are true to field view. 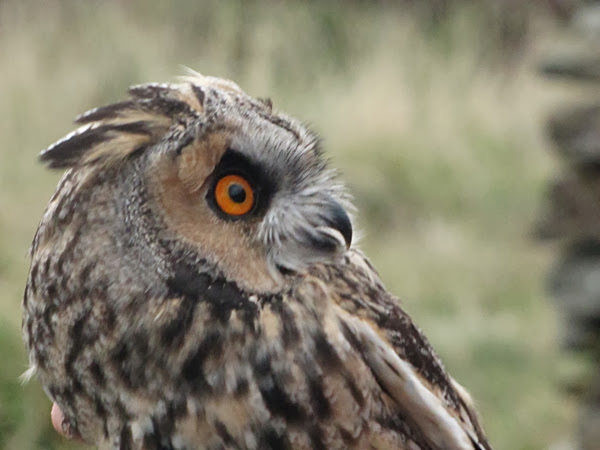 The girls enjoyed seeing the LEO in the hand 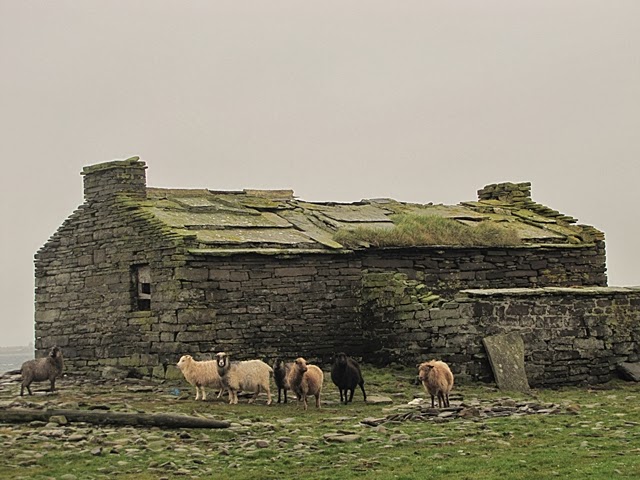 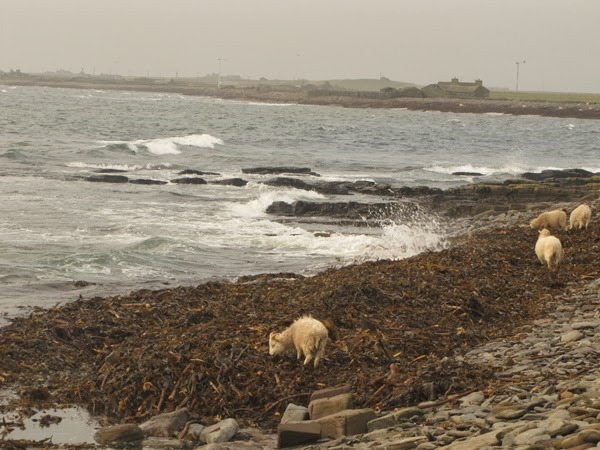 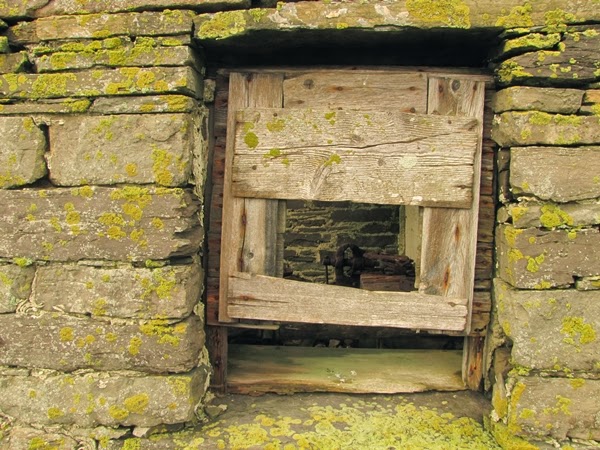 Scenes from the north end of the island at Bewan.

At home today a Lesser Whitethroat was new in the garden, checking call and quite stron mask would indicate that this was a "standard" individual and not an eastern subspecies. Only a single Chiffchaff seemed to remain, and it was not the more interesting individual of the three yesterday. There were still two Blackcaps and redwings trickled through all day. A Kestrel and a Hen Harrier hunted in the garden. 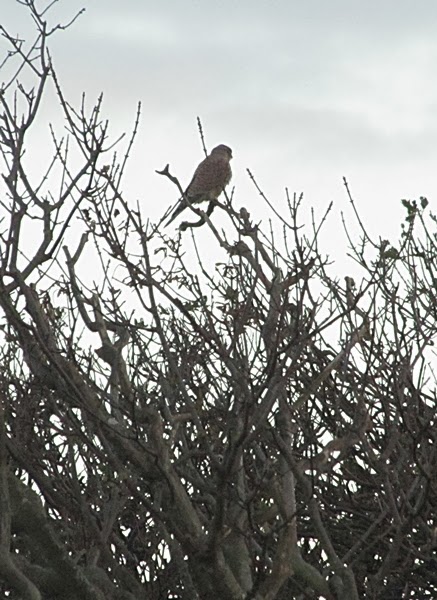 Down at Bosquoy there were still 37 Blackwits and a drake Goosander was a nice early surprise. best of all though was a patch tick, Jack Snipe. 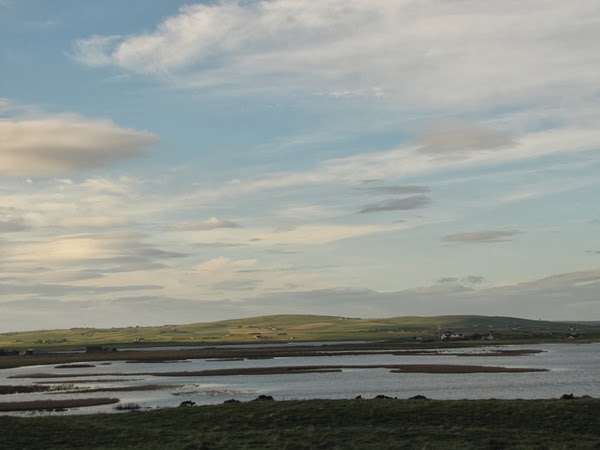 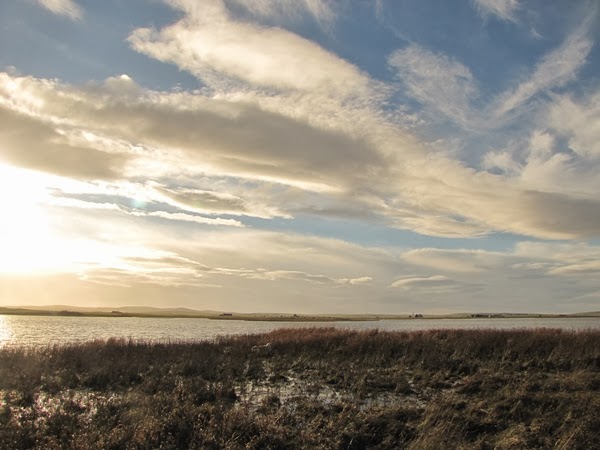 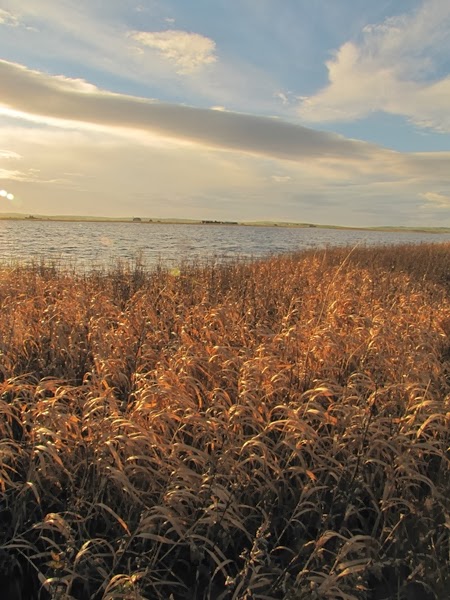 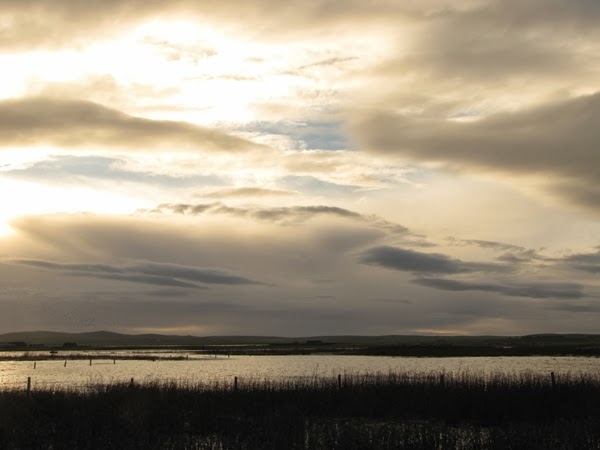 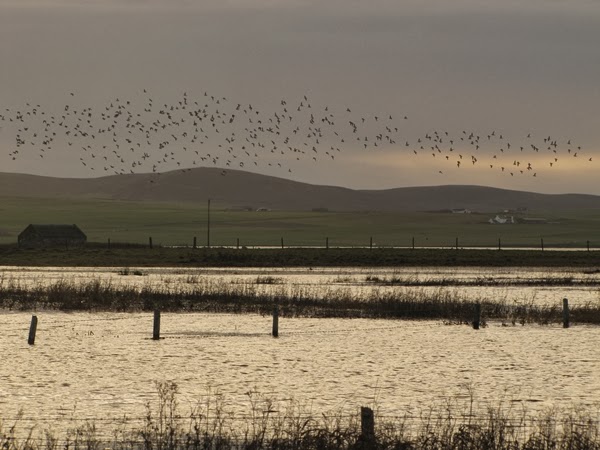 The rain eventually arrived from the south-east (but we're not expecting any kind f spectacular weather here tomorrow).

An arival overnight found the garden still bouncing with thrushes, an increase in Brambling and at least 4 (if not more) Blackcaps. Much of the day spent in town but an afternoon return found a Great Spot in the garden and a stroll down to The Shunan found another one (yes they looked very different too) in the sycamore hedge. By afternoon the thrushes had mostly gone, but for the Blackbirds as in three days they have stripped the whitebeam of a rather splendid crop of berries.

Significant battle with Voda to get my phone sim and number all swapped, still incomplete, however an even bigger battle to move the contacts across. Blackberry to Android was a breeze with bluetooth: Android to iPhone (finally succumbed) mega fight, looks like entering them all manually is the only way to go.
Posted by Alastair at 12:01 am No comments:

Well I meant to post, but the week has gone by in a bit of a blur, and somehow I never got around to it. I can't remember much about it now either, oh yes now I recall I went to see the Western Bonelli's Warbler, polled up and got excellent views within a few minutes, nice one BH. As I was east I decided to go hunting on Tankerness, actually a bit of a trek from Burray but a favourite place, Surf Scoter was in mind as it's the time of year. Well it took me a couple of hours but a drake Surfie eventually gave himself up. Not the world's greatest views but I'm not complaining. Also off north Tankerness were good numbers of Slavonian Grebes and Velvet Scoters and five GNDs, all species that can be a tad tricky from West Mainland. 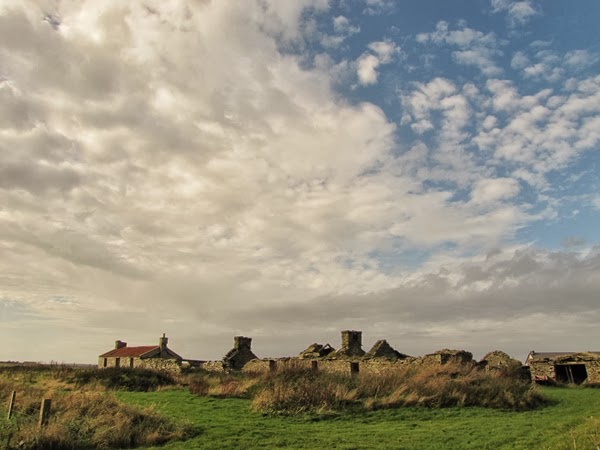 On the home patch during the week Redwings started to be more common until on Friday pm a large lump of them dumped into the garden and surrounds and started eating all the berries on the whitebeams. The first Fieldfares of the autumn also put in a show with 30 Brambling and a Chaffinch or two. Most frustrating on Friday was a warbler in the sycamores that just did not give itself up, looked like a small Phyllosc. Also through Friday a fair bit of Woodpig movement was noted. 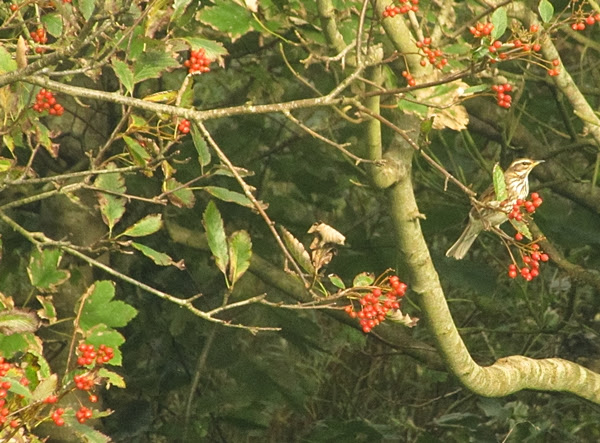 There won't be any berries left soon 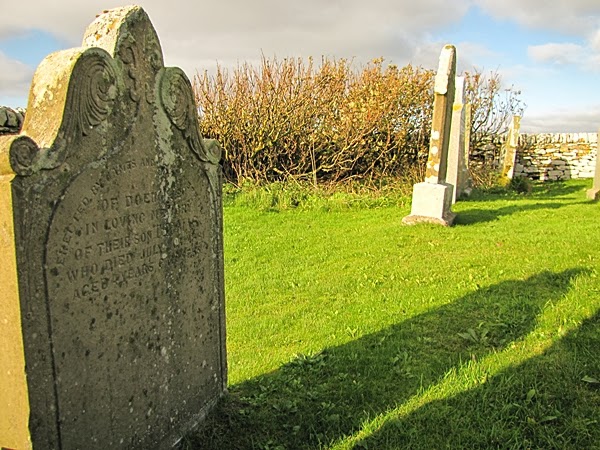 Skaill kirkyard, the larger of the two sycamore clumps

Today was a bit of a repeat of yesterday evening at home except just two Brambling and no elusive warbler, and no Woodpigs. The Turtle Dove gave a slightly closer, but very brief view on the The Links at Palace, a Curlew Sand was at Skaill where the lockside and loch held a Blackwit and 9 Whoopers. Tomorrow I will be on a Turtle Dove hunt am as I really ought to get a close view of this thing, so no dog and a cuatious approach is called for. 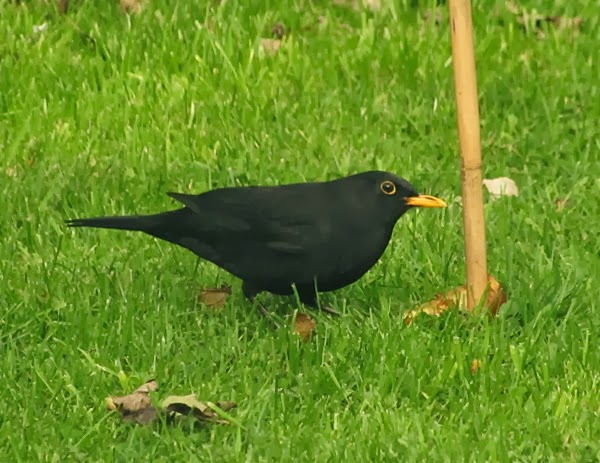 Plenty of these in the garden and 7 at Palace, clearly a bit of a drop 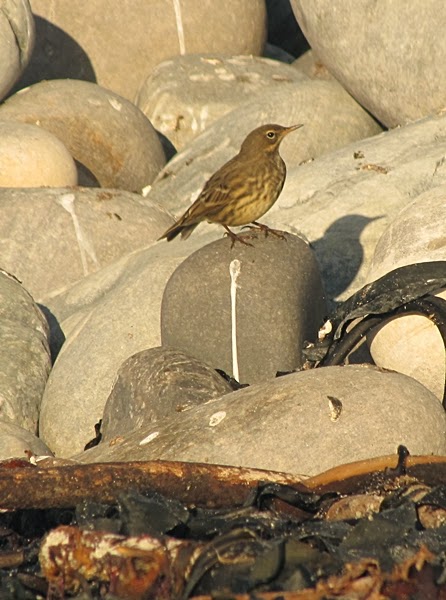 35 of these on Skaill beach, where have they come from? I fancy these are of a northern origin myself