Weekend of 27/28 and I was supposed to be digging the tatty bed. We have weed suppressant on the bed, bits of old carpet and cardboard and at this time of year that's always quite exciting to be moving (if you're interested in invertebrates it is anyway). Cameras at the ready I pull some carpet up and then quickly look on the back of it and on the soil underneath. A nice Pterostichus melanarius, some Collembola and a lot of slugs. The slugs looked unfamiliar so I went inside to get the slug book, there's a very good Field Studies Council key. First up were these Tandonia budapestensis. 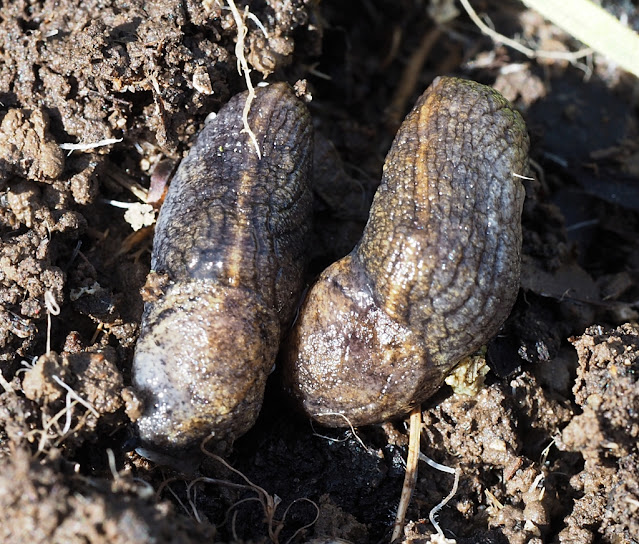 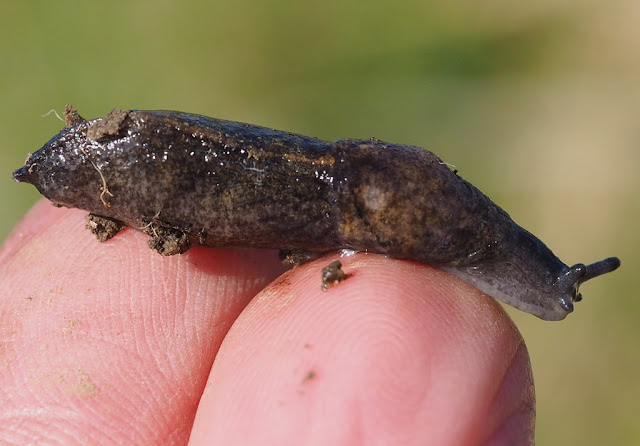 I don't recall identifying these before so I was quite chuffed. Whilst photographing these I noticed a strange, small, white slug amongst them, a worm-like thing. I had an inkling what that might be and quickly focussed in on the beast. I remembered reading on the Pan-listing FB group someone being very pleased to find one of these as they tend to spend most of their lives buried in the soil. 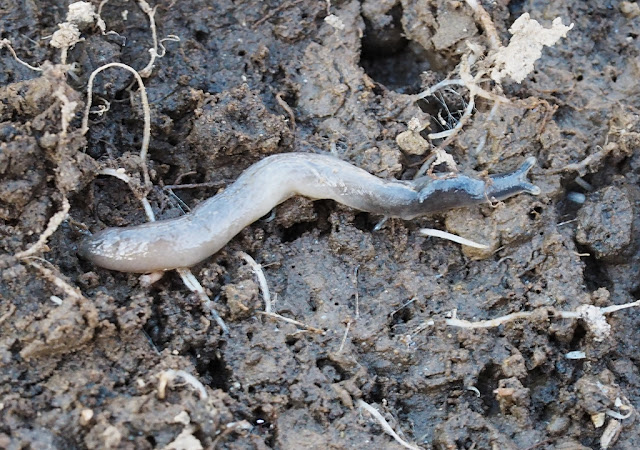 An added bonus is that I believe there are very few records of this species for Orkney.

Further delving around found Deroceras invadens, Deroceras reticulatum, two common species and this Arion, which turned out to be Arion flagellus (Green-soled Slug, or even Spanish Stealth Slug, an alternative colloquial name). This was a small immature. 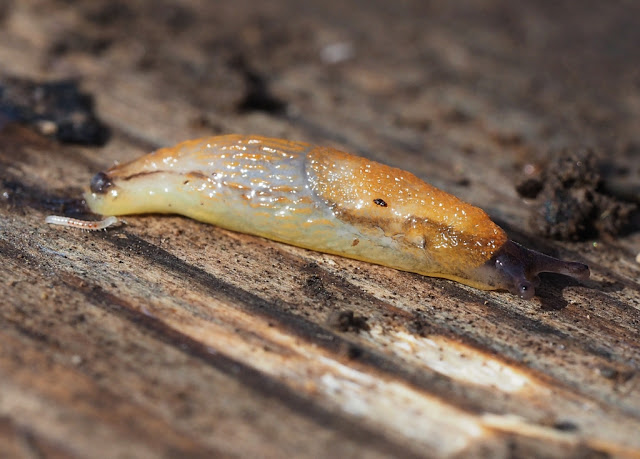 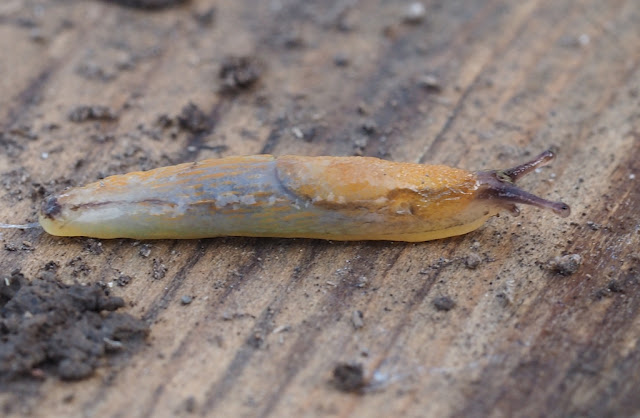 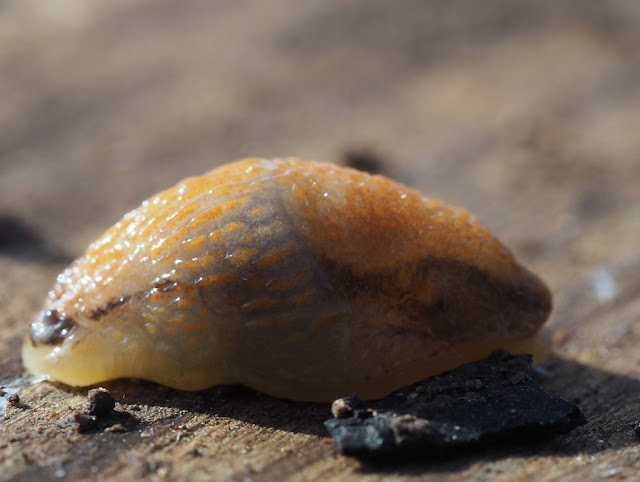 Feeling a bit more confident about having a go at these now I added a further species later in the week when working with pupils, managing to identify this Arion distinctus. 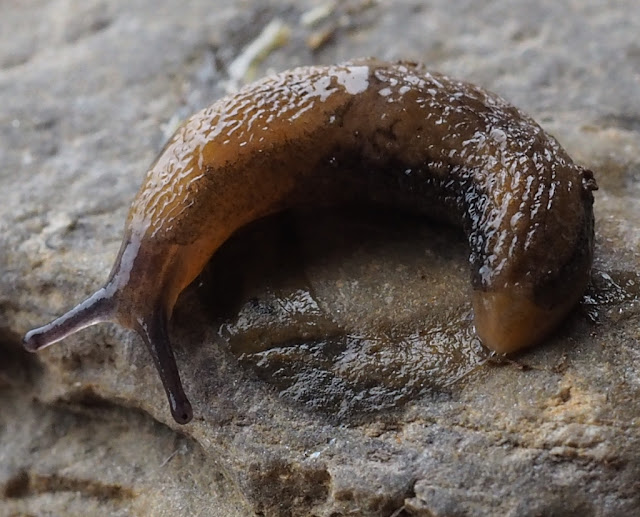 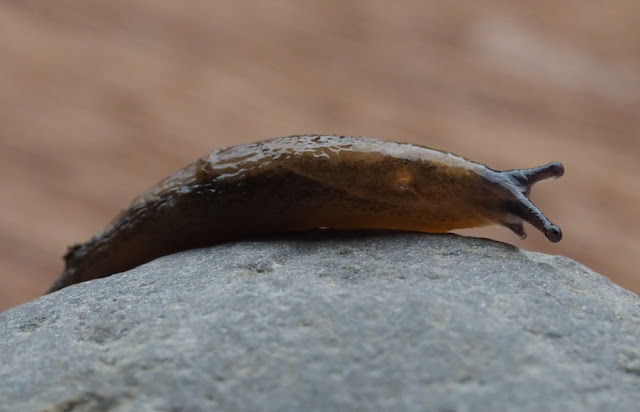 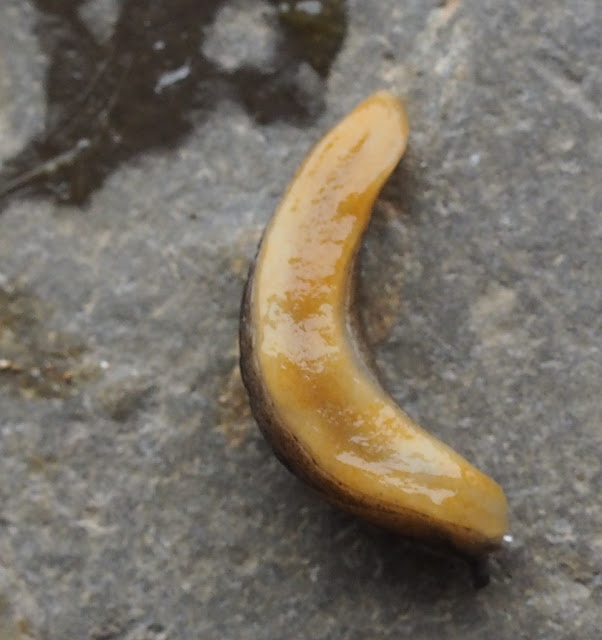 Posted by Alastair at 9:46 pm No comments:

We walked at Marwick and the auks were on the cliffs, always a treat. I've a few places now where I can get reasonably close, relatively safely, as long as you don't stand up below an over-hang, ouch! With care, moving slowly, and not exclaming loudly when you bang your head, the birds seem ok about the approach. No Puffins yet, too early. 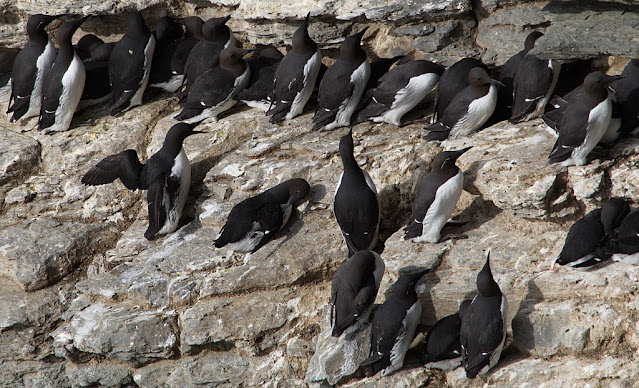 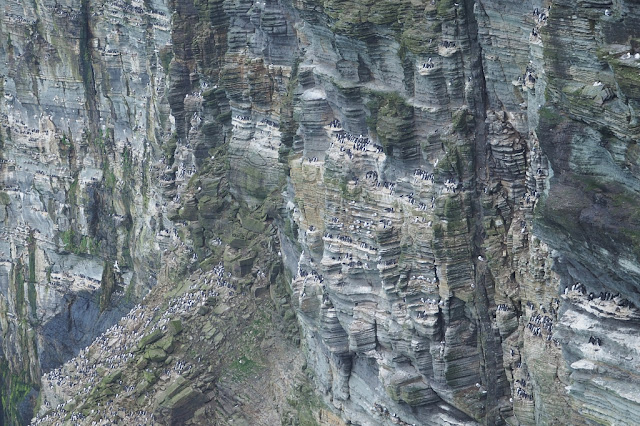 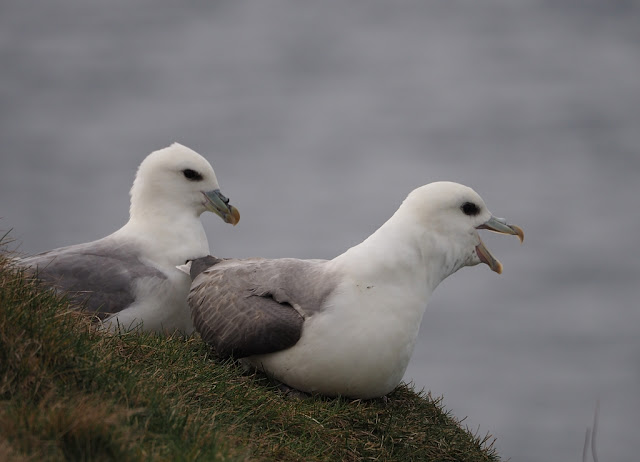 Back at the ranch the Lesser Celandine are flowering. I'm making a real effort this year with botany, I should be able to record about 150 species for the Ikm sq around home I'm told. We'll see.

I'm going to try to photograph each species I find as it comes into flower.

Some photos from last week that somehow didn't get on the last post. 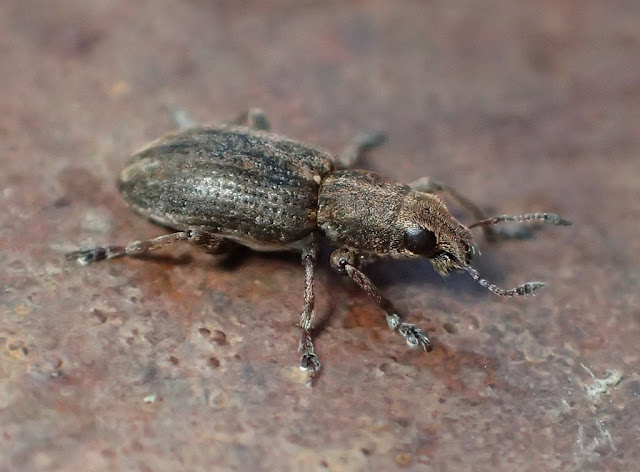 There is frog spawn in every wee field flood.

There are still  up to 19 Pintail on The Shunan with good numbers of Teal, Wigeon and Mallard. New patch species for the year in the ast week or so have included Red-breasted Merganser and the first Meadow Pipits.

I meant to post something but I got distracted...

At work we take part in a project, most years, raising Brown Trout from ova in the classroom. The Orkney Trout Fishing Association donate the ova, and this year helped us with some equipment, a glass door fridge. In the past the classroom part has involved a bit of a hike into the nether regions of the community part of the building where there is a route to a very cold, ground floor fire escape with space to put a small fish tank. Many thanks to MT and to the OTFA for all their help. This year, thanks to the fridge, the trout are in the classroom. They hatched yesterday and today, cute. https://trootintheshed.wordpress.com/

I've been writing other things, which is the main reason why there have been no posts here. A couple of pieces for the Orkney Field Club Bulletin. Also getting my rare bird descriptions done. Still trying to add data from 2020 to iRecord, and this year I'm already getting behind.

One night moth trapping produced, a Common Quaker in the trap and a Depressaria radiella on a wall of the house.

I've also been playing around with new kit, sound recording stuff. I thought I might have a bit of a go at this nocmig lark. The trouble here is that there are so many calling birds in spring, waders, wildfowl and corvids mostly. So I'm not sure how this is going to work, but I'll give it a try. I've bought a couple of relatively inexpensive bits of kit, a Tascam recorder and a Sennheiser microphone. Just waiting for a lead to come now. I have other uses for this stuff anyway, so nothing wasted and maybe something gained.

My job was advertised the other day, so any aspiring head teachers out there who fancy working with some excellent folk, and experiencing the northern isles should perhaps head over to - https://www.myjobscotland.gov.uk/councils/orkney-islands-council/jobs/head-teacher-dounby-community-school-211982 I am without doubt far too old to do it any longer, knackered, and ready to be put out to graze in the pleasant, but occasionally weather beaten, meadows of exploration (of Wild Things).

I'll let the Rooks have the last say....

Thanks to Leif Bersweden for his #CouchTo10Mosses I've had a go at identifying a few. Possibly a bit easier than lichens, probably ignorance speaking there. 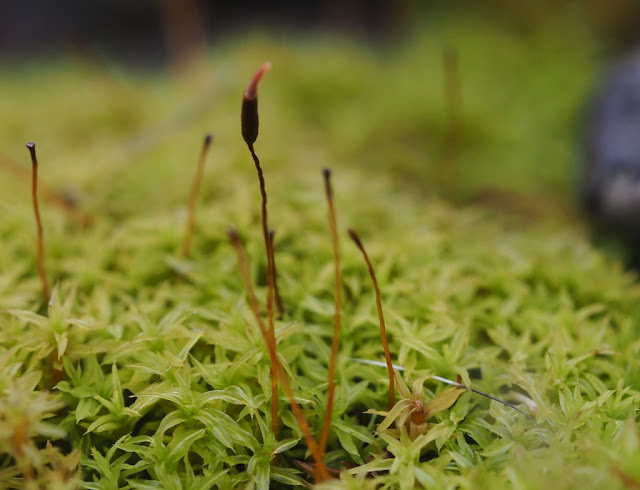 The other moss there is Didymodon fallax apparently. I need to check the info on the BBS site. Many thanks to BH for help with this and some other moss IDs.

This is an easy hit for a few new species anyway and, having never looked carefully at these plants before, they are rather lovely.

When we went for a walk at Northside I photographed a few maritime mosses. BH identified these for me, and JB chipped in, thanks chaps.

I'll have a bit of a poke about and see if I can find a few more. There are some very common and distinctive ones I've not figured out.

Before 2019, from 2009, no frogs. 2019 I found three frogs in the 1km sq, around the house, one of which crawled up my trouser leg when I was searching for inverts on the ground. Last year I found a further four or five and some frog spawn, just a clump in a shallow pool in the middle of a damp meadow. This year, quite a lot of frogs and 14 clumps of frog spawn. 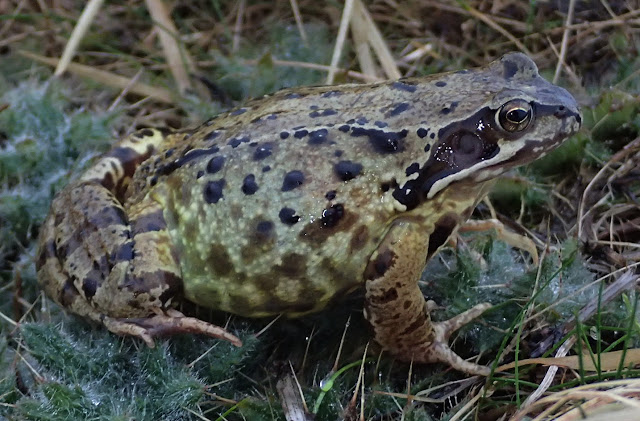 So it looks like there is some population growth, despite the best efforts of the local Grey Herons, I watched a heron swallow a large frog on Saturday. The one above was by the side of our road on Sunday and apparently there was another this evening.

There is now considerable doubt around my identification of Sitona linealis from last week. MG very helpfully is suggesting that these are Sitona obsoletus. This is a species I can't find much information about, colloquially named Clover-root Weevil their occurrence in the trough would make sense, they appeared shortly after the ploughing of a clover rich grazing field. Looking in the same trough on Saturday, another specimen (as well as the abdomen of a Bembidion sp that requires further investigation) was found. I will try to take some better photos, higher resolution is required I think.

New beetles for the year this weekend.

Saturday found seven Shelduck on The Shunan, that might be a record. They were duelling and threatening and fairly soon the number went back to four, two pairs, it would be nice if they attempted to breed. Today there were five pairs of Pintail, pretty sure that's a record number as well. It's wonderfully noisy with Oystercatchers and Curlew all over the place, hundreds of Oysterdcatcher. Both Redshank and Lapwing are establishing territories.