I'm very fond of The Guardian newspaper and have been reading it for many years, even when we lived in Kathmandu we subscribed to the weekly version. Whilst it is full of serious news, which I tend to get via Radio 4, it is the more light hearted elements of the newspaper that generally give me the most pleasure. The Kakuro and Quick Crossword in G2 are often my first port of call on return from work. This much to Louise's annoyance as I become incommunicado for some considerable period of time, depending on the difficulty of the puzzles or my perseverence on that particular evening. On Thursdays the IT supplement is always of interest, on Friday the music and cinema reviews, on Tuesday I usually have at least a glance at Education, although it isn't the strongest 'extra bit'. I don't like the Saturday magazine, full of consumerist crap mostly, but I do like the Saturday Guide which is full of quirky bits and bats - like Trek Yourself

On a more serious note the obituaries are often fascinating. I also like the Sports pages, not because I especially like sport but because its world is weird and unfathomable. I am fascinated by the rise and fall of football clubs, the management and the money and how their fortunes ebb and flo.

The best read is usually in G2. Most annoying are the hopeless wildlife posters and other Free rubbish - although the countries of the world supplement this week is quite good, still has mistakes in it though.

Now I think there is going to be a problem with our move because The Guardian is often hard to get hold of in Scotland, I suspect that it is not generally available on Orkney. I don't really want to go back to the weekly version so some investigation will need to take place in order to continue to obtain it - or maybe The Scotsman will replace it ....
Posted by Alastair at 11:23 pm No comments:

Hmm, StatCounter doesn't seem to be working properly, can't fix it at the moment either. I think I may need to reinstall it. The total is ok but there is no access to the detail, sorry.
Posted by Alastair at 9:39 pm No comments: 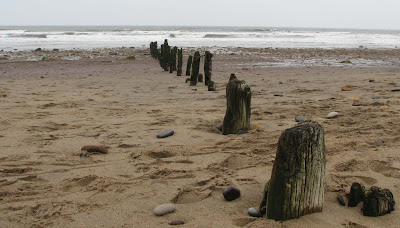 Slowly things are falling into place. The sea fret has changed to a moor fret and dampened my enthusiasm for any birding, in any case organisational things have had to be done. A wander down to the sea today with the family found little to excite with few birds around.

Some links have been added to the side panel of this blog and I've done a bit of "design". The intention is to gradually develop the blog with an occasional post until it 'takes over' in August.

A quick browse through the links indicates that the south-easterly winds have brought a few birds to the north. I'm beginning to feel a certain impatience but will have to contain myself and enjoy my remaining months in Yorkshire.

A small celebration with a film - Bombon, El Perro, a film by Carlos Sorin an Argentinian film maker. The film was made without actors and by filming many, many takes in chronological order, then editing the whole thing into a story. That it works so successfully, creating a poignant, entertaining and touching narrative says something for his vision. The story has a resonance for today's Britain, with ordinary people requiring fortutude and endurance.
Posted by Alastair at 11:08 pm No comments:

At present alongside, but eventually on its own, having taken the limelight, my new blog will evolve here. The blog pays its dues now to both John Peel and to Ivor Cutlor, heroes from my past. A moment's silence to be taken at this appropriate and kind point in time.
Posted by Alastair at 8:25 pm No comments: