I enjoy our House Sparrows. There is a small colony round-about the house and garden. If I put grain out in the open near the Buddlia they pour out and back from the cover of the bushes, always nervous, on the alert. On an occasion we watched the Sparrowhawk arrive, missing its chance it sat on the bench beside  and between the two Buddlia, and the House Spugs just retreated deeper into the cover of the dense branches. The hawk flew and the sparrows emerged and back to feeding. I sat by the other Buddlia, in the small walled garden and photographed House Sparrows in cover the other day. 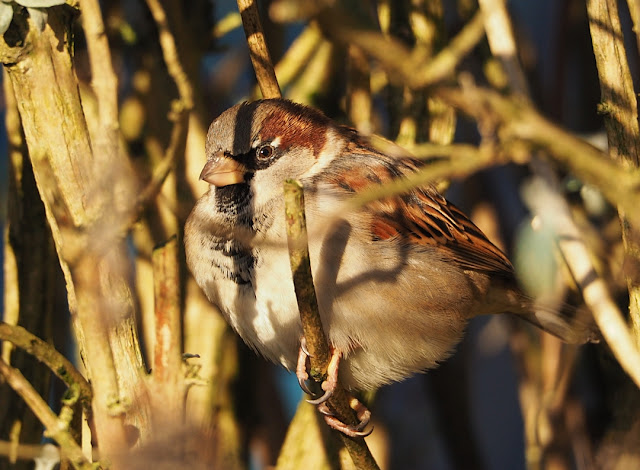 Their other trick is to sit on our roof ridge from where they overlook both feeding places.

There is again a male with a white, left, outer tail feather. There was a male like that here previously for at least four years. I've noticed this one fairly recently, presumably something in the local gene pool.

The sky was spectacular with snow on the Hoy hills so M and I headed to Warbeth beach. 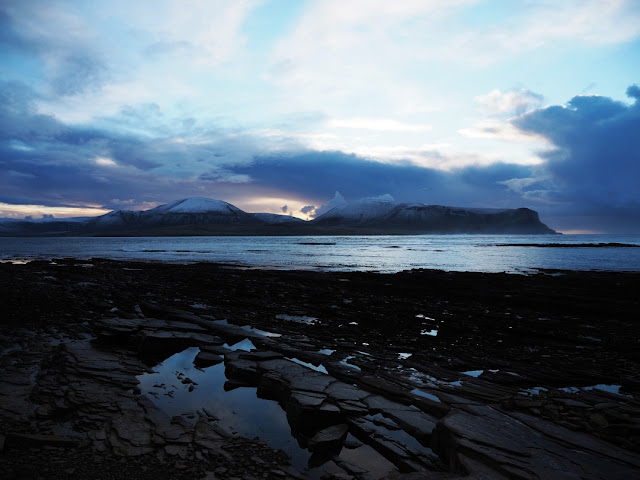 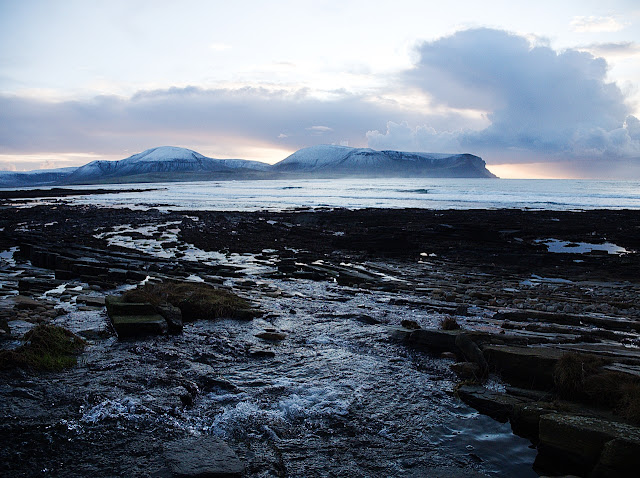 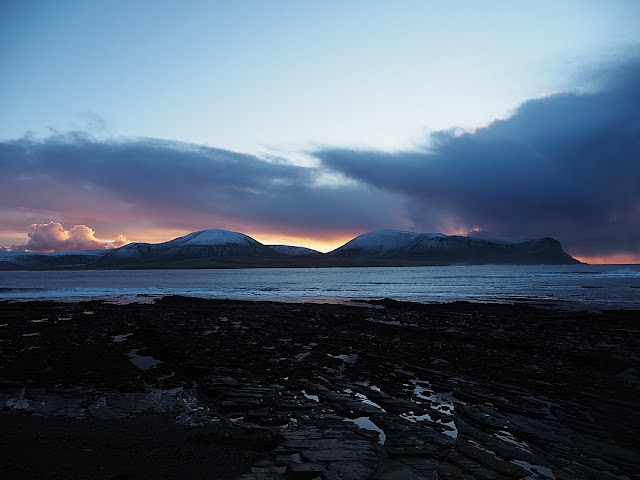 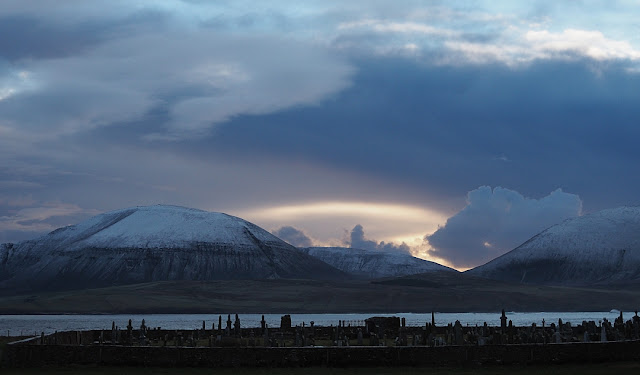 Goldfinch numbers took a sudden boost with 17, three Woodpigeon appeared unexpectedly as well as a Skylark, a very few Redwing and a couple of Cormorant. The juvenile Mute Swan didn't understand ice and ended up struggling across The Shunan to get to open water.

A brief afternoon trip to The Links beach didn't yield much, managed a few shots of Rockit.

The welcome announcement of the Oxford vaccine approval will hopefully change the game for 2021. A year, I fear that will not be without its own challenges. And for the record, abstention on the vote was IMHO the correct thing to do, call yourself an opposition Kev (that's what he's called in this household)? Yes a "deal" was essential but something a lot worse than we had in the first place? And on the fishing question this is an interesting read, no one has sued them yet so I'm guessing it is all true - https://unearthed.greenpeace.org/2018/10/11/fishing-quota-uk-defra-michael-gove/?fbclid=IwAR0euE0zNm5Xe6Dkj_vwnPkbYKbXrgKqGODyJkk40dNniHhdbX41V_zEado

And on that happy wee rant I'll shut up for the year, probably. 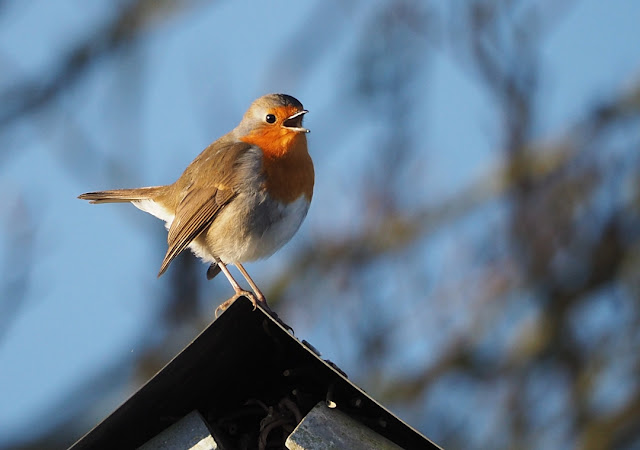 Christmas morning and as I was messing about in the boiler room feeding cats and checking the boiler (it's a wood pellet contraption that requires fettling every now and again) I caught a glimpse of a small bird flit through the Swedish Whitebeams. Fortunately it came to the front and even without bins I managed to confirm it as a Goldcrest. That's the first December record.

As you can see not a common bird on the patch. Usually in the garden but occasionally found in the Hawthorn Hedge.

Christmas brought a few bits of kit, a camera protective rucksack, I'm thinking of having a go at a green year list and using the bike for more than just going to work and the odd off road session. Also some extension tubes which look as if they'll be very useful for the 12 - 45 Pro lens and using it for photographing specimens. I'll need to spend some time working out how that will work, lighting being the biggest issue. I haven't found out if the internal focus stacking on the 5 will work with these yet, hopefully it will.

Not much on the birding front otherwise, the Goosander are still on Loch of Bosquoy and there are good numbers of duck on The Shunan with Gadwall, Shoveler and Goldeneye as well as the usuals. A Little Grebe has been present for the last week as well.

I'm plugging away, entering data in iRecord, moths mostly, just June and July to go now. I don't do New Year's resolutions but with retirement in the summer I should be able to keep more up-to-date in future. It's a pain when it gets this out of hand. The fridge contains a lot of specimen tubes as well, things I just haven't got around to working through. 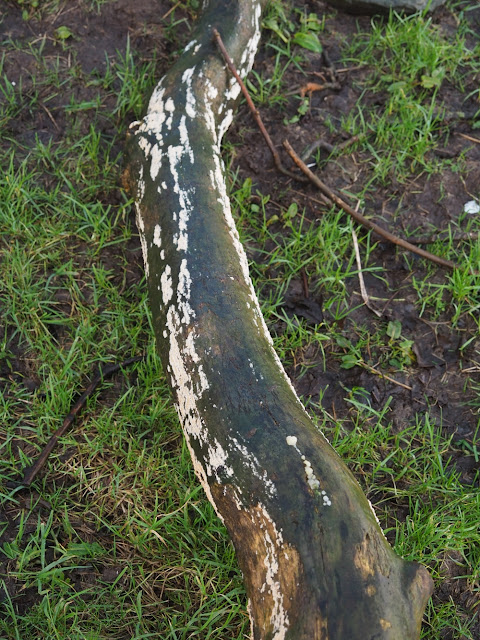 Easier to look at bird records as I do put those into Birdtrack pretty much daily, the very good phone app helps with that. The birds species total is (so far) 96 plus a hybrid (Hooded/Carrion Crow), Carrion Crow was recorded just outside The Shunan patch. Missing this year were Twite, Common Redpoll... and at this point discover that my MS Office suite has stopped working. The software was bought via an EU rule allowing reselling of redundant units, I'm just wondering if it has failed due to MS being sharp on the EU leaving fiasco and that my previously valid license is no longer so. Excursion into the world of WPS followed....

The software didn't work again today so something's up. WPS (free office suite) does work though, or at least the Excel bit does so that buys a bit of time before deciding what to do.

.... more missing, Ringed Plover and any more interesting waders other than Jack Snipe and Woodcock, no interesting gulls, Carrion Crow, no interesting geese, etc etc. However, new for the patch were Osprey and Woodchat. I've seen Osprey several times in the past from the garden but one hadn't entered airspace previously. The Woodchat was ace, brilliant surprise, and I'd not found one anywhere before (despite being credited with an Irish record, just the only person bothered to write a description). 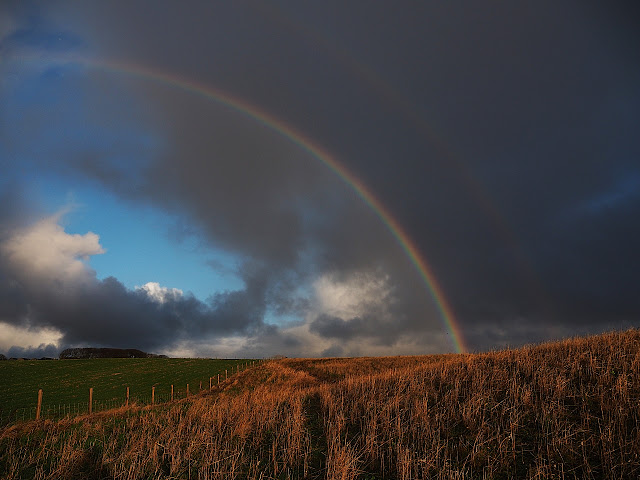 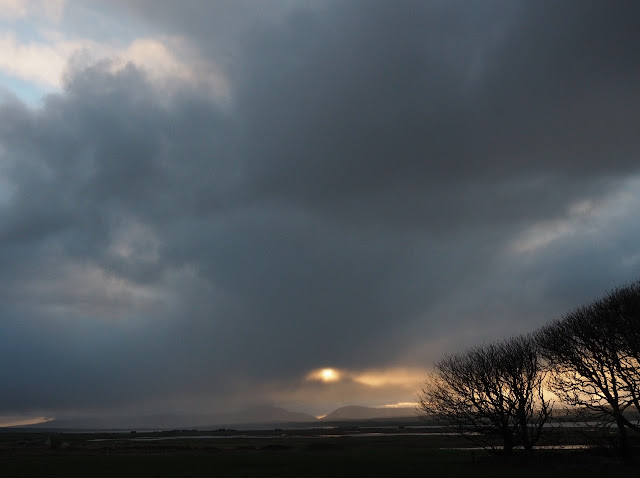 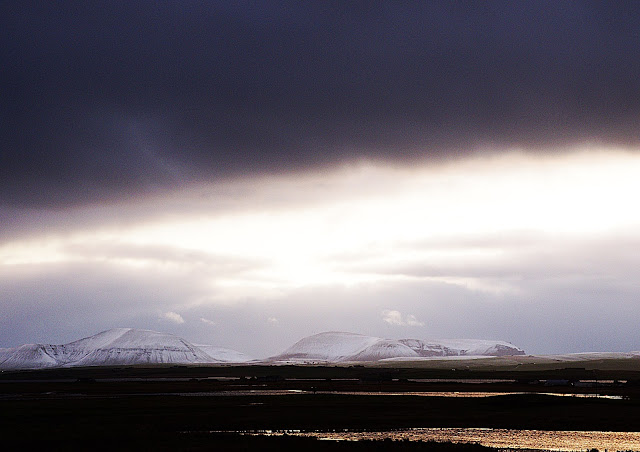 Posted by Alastair at 6:11 pm No comments:

No post last week as the weather was so bad I took not one photo (well, ok, I took one or two but I had very little to say).

Missed this last night, I couldn't cope with the 2.30am start. However, Owen has kindly made it available here: https://www.youtube.com/watch?v=rCpd8Kz07Gg - actually he pre-recorded the show as he was a bit nervous. Advance Base Christmas gig from Owen's basement. You can donate here: www.paypal.me/advancebase If you are unfamiliar with Advance Base the best place to start is with the Animal Companionship album, you can buy it (yes, purchase music so our musicians can keep going) here: https://advancebase.bandcamp.com/album/animal-companionship

Before being Advance Base Owen was Casiotone for the Painfully Alone. There are CFTPA songs in the set. Owen is one of my favourite musicians, someone who is an astute observer of the human condition. Lo-fi brilliance.

Louise bought us a visit to the O2 and the Pete Tong gig.  We had a load of connection issues, due to the offspring watching a movie... however, it was good and it wasn't. Somehow for me despite the great sound, and music I like, it seemed kind of wrong with the orchestra, I couldn't get into it anyway. Preferred Owen in his basement.

We went back to the Links beach today, I stayed there whilst Louise and the hound tramped up Marwick Head.

I took lots of pictures of waders in very poor light. Some came out ok I think ISO 1600 which shows the difference between the Olympus and the Canon. 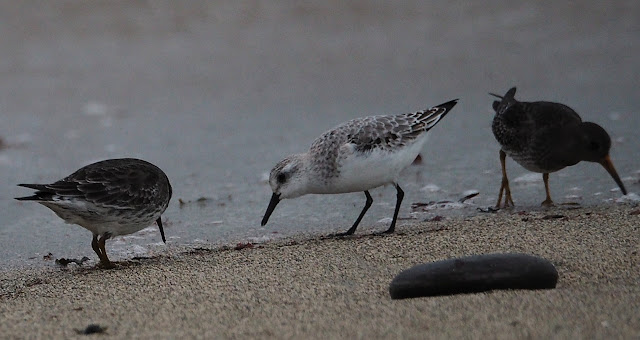 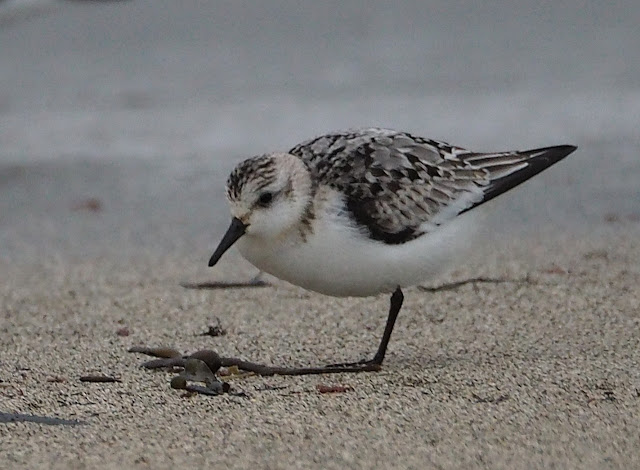 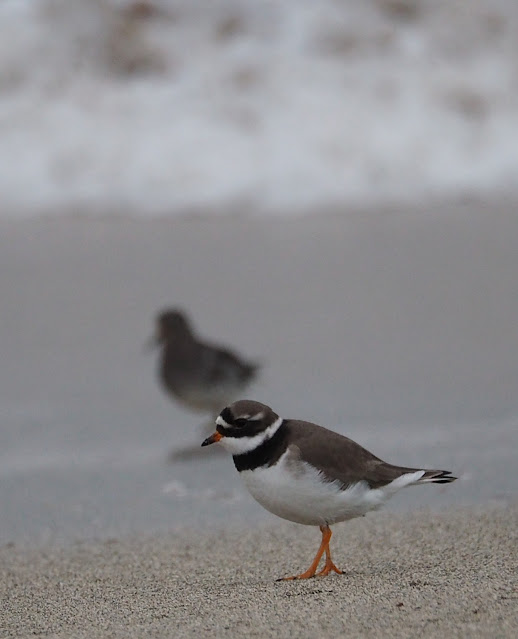 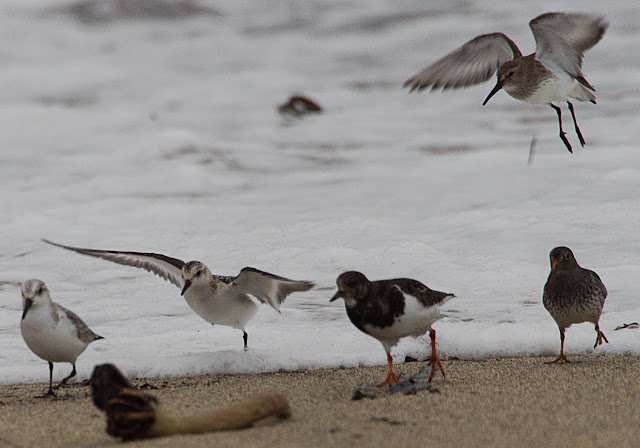 Sunday was better weather and M and I, walked up to the Kitchener memorial. Took lots of pictures of waves and threw most away as usual. 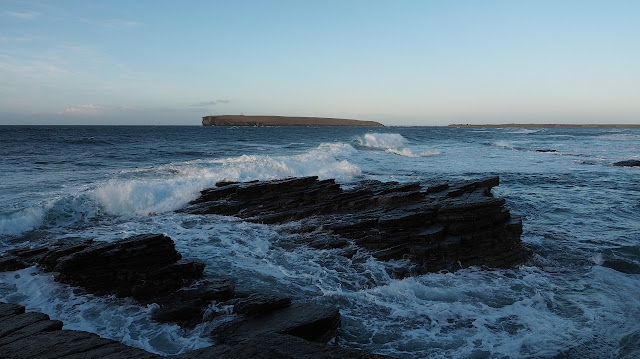 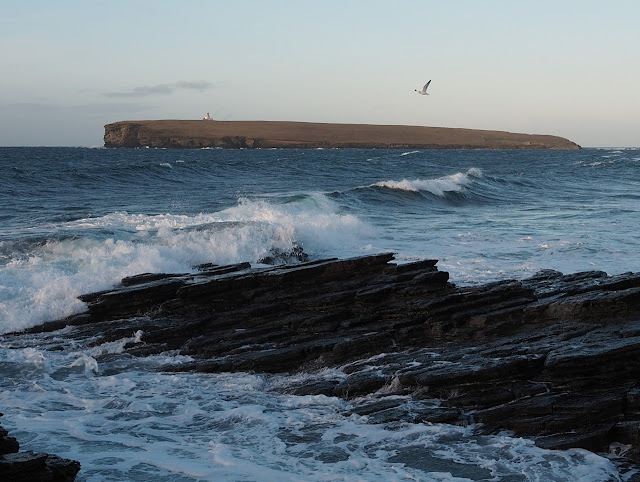 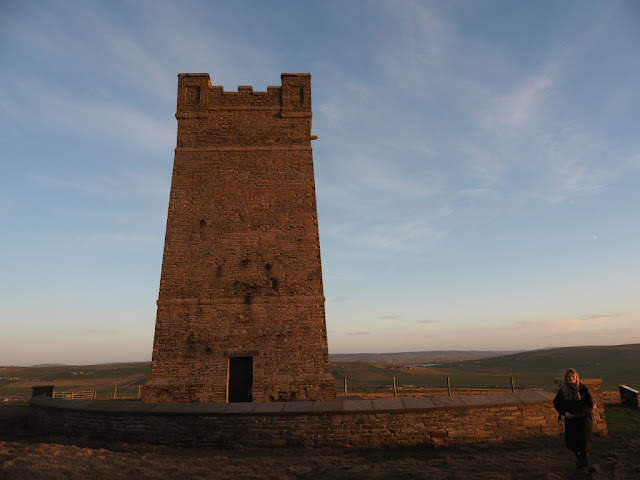 A record number of Chaffinch in the garden today, at least for winter, 23. Seven Goldfinch yesterday. I was looking at my data for Goldfinch and for Twite, two species that on the home patch (approx 1km) have shared very different fortunes. When we came here in 2009, Twite was quite a common bird to my recall, Goldfinch a scarce one. These graphs show what has happened since 2013 (data prior to then was not kept so carefully).

To be fair, although the ball was about half a metre out it was tricky to see and there were no actual cameras to prove the issue, couple that with Seb Haller falling over in front of an open goal when he'd done the hard stuff... I guess we are back to service as normal AFU. There is a certain relief to that though, somewhat strangely.

On a more positive note patrolling round with the head torch on Saturday evening produced a Winter Moth and a bug which I need to ID.

I'm very much still a beginner with this system camera, but I was quite pleased with this in low light on Saturday morning.

We watched Ken Loach's "Sorry We Missed You" on Saturday night, not a jolly watch, unfortunately all too true.

Today was a very nice day, not exactly warm, but still and with a fair bit of sun. I toyed with the idea of going to look for the Surfie and the GNDs but the greenhouse needed an end of season sort out. Lots of Green Cellar Slug in there, tucked into the bottom of pots etc. These eggs must surely be from that species.

The Chaffinch flock is growing, I counted 14 which I'm sure is a winter record, I might have recorded more on passage, I must take a look in Birdtrack.

We went to the Links beach, hopefully to photograph a few waders.

The actinic is out at the moment, there was Winter Moth again on the trees when I put it out and at 7 there was a single Mottled Umber high up on a branch. 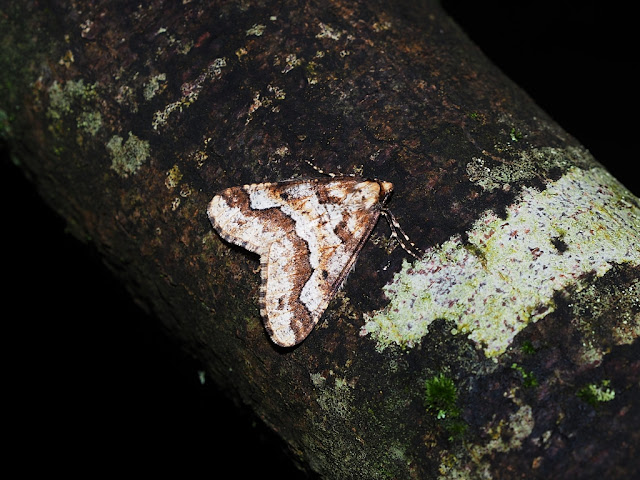 Posted by Alastair at 9:11 pm No comments: