The seawatching last weekend was great on the Saturday in the strong westerly with an unprecedented Kittiwake count of 1104 in two hours. They were still going at the same rate over an hour later when I returned from walking out to beyond the Whalebone so I will have seen many more. Also 13 very late Soots and best of all two Common Scoter, very uncommon from Pt of Buckquoy. Much was expected from the Sunday but the expected return movement didn't happen and it was disappointing. 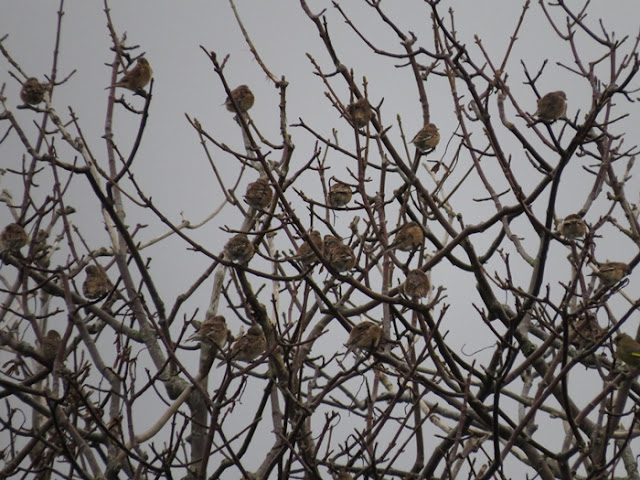 Pile of Linnets in the garden was unusual.  And a Raven was hanging around the rookery.

During the week Louise had a white morph Gyr zooming around the back of the house on Thursday lunchtime. No sign today though.

Not much of a seawatch today, just 2 GND and a Red-th Diver. But a Grey Plover along the beach was new for the year. 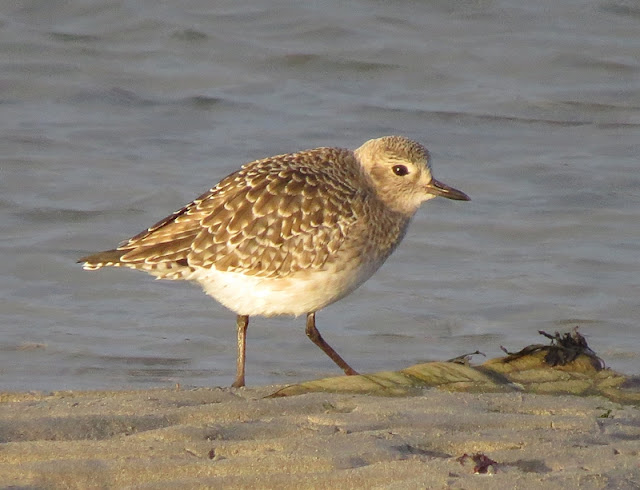 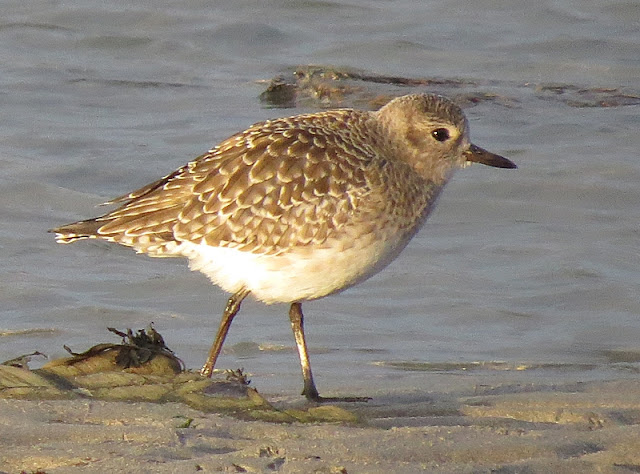 Driving back home though there was a Short-eared Owl sitting in the middle of the road. Stop, reverse, it was obviously stunned. I managed to catch it and get it back up to the house and stick it in a cardboard box to see if it would recover but a couple of hours later it was dead. When I looked at it closely one wing was missing from the shoulder. Subsequently saw three live ones during the rest of the day. This was the second I've found killed on the roads in Harray this year. 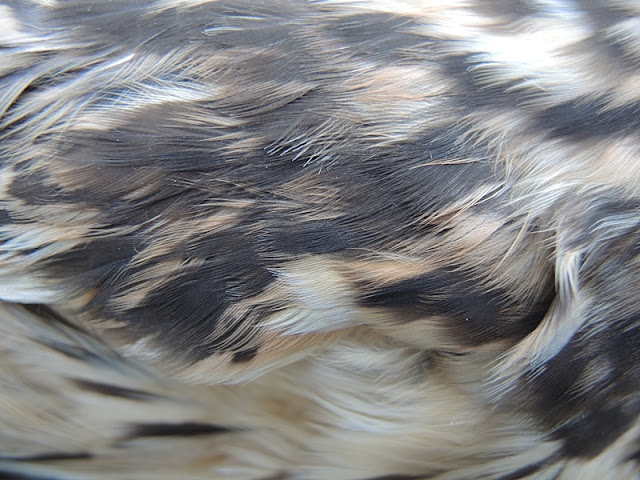 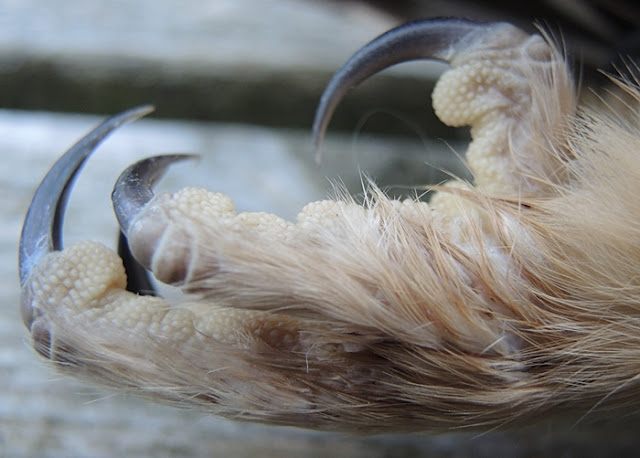 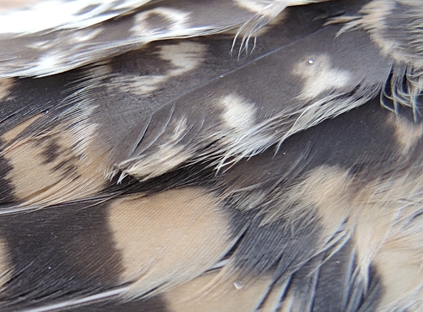 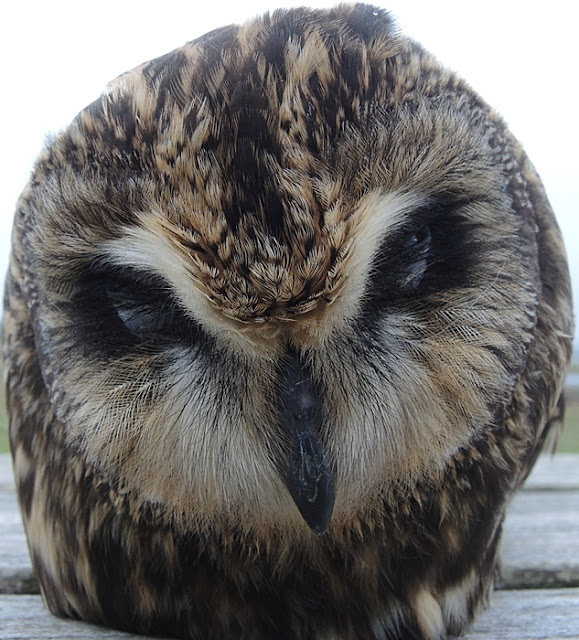 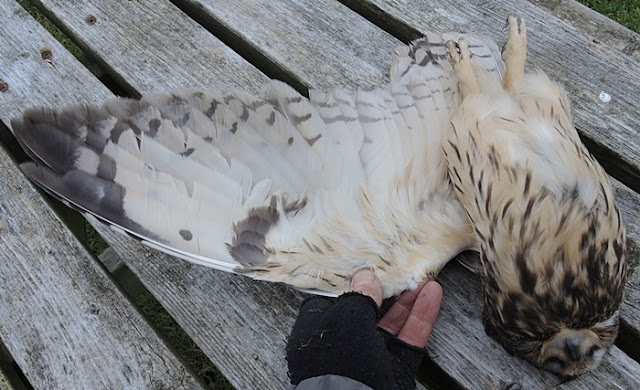 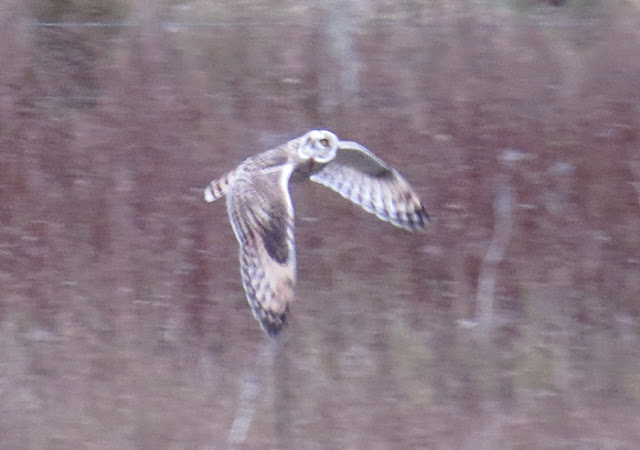 In the garden there was a Goldfinch, just the second of the year, late in the afternoon (too late for a photo). Smart House Sparrow in the sunshine earlier on... 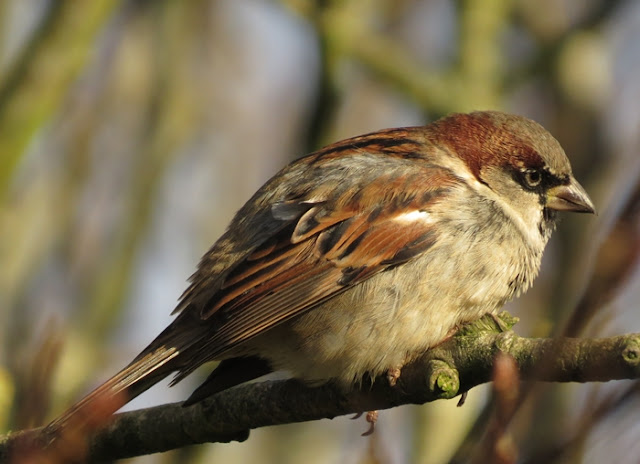 Great days birding both yesterday and today. I didn't really get going early enough on either day but by 08:30 or so I was in the field on Saturday. I volunteered to feed the ponies so that meant that Howaback was the first port of call.

Like the American Wigeon in the spring I was scanning through the duck flock a number of times before picking out "the different one". This time the bright white flashes on the breast sides drew my attention to a black, grey and white Aythya duck that seemed subtly different from a Tuftie. It was feeding along the edge, near the far bank, so took a bit of concentration but eventually it turned and showed the broad white band on the bill and the distinctive head shape. 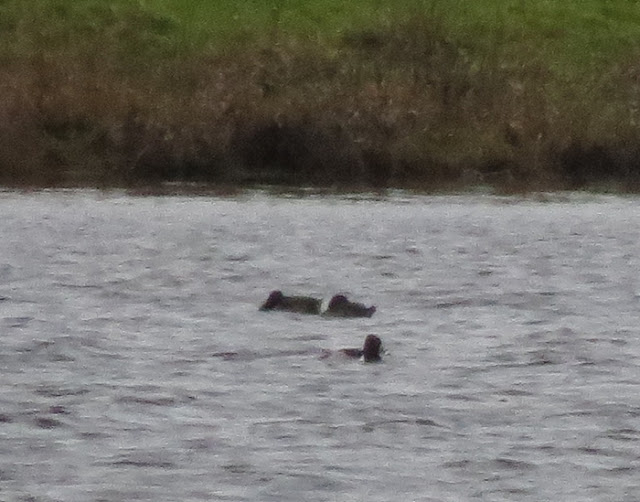 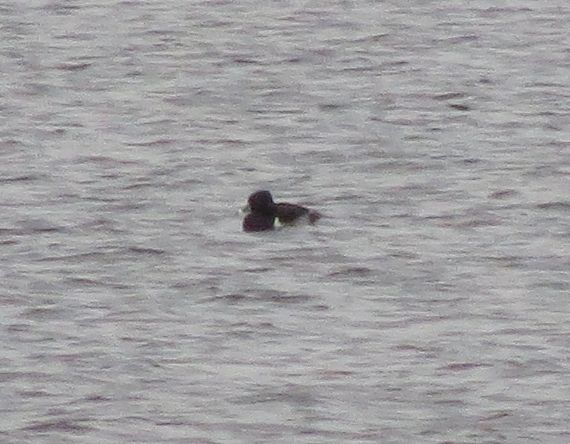 Other nice things at Howaback included 2 Slav Grebes, 9 Whooper Swans, 45 Twite and a couple of Stonechat. 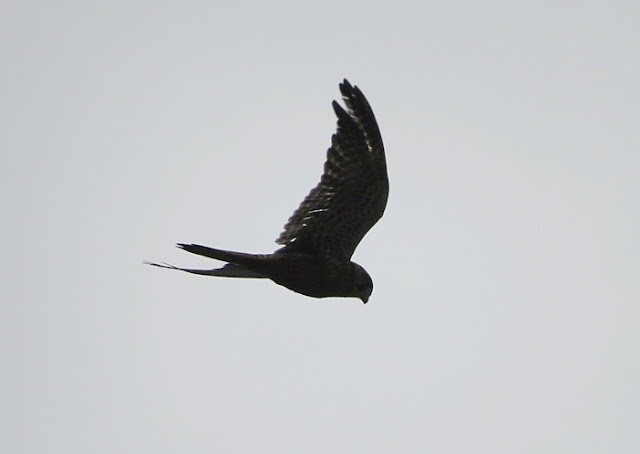 Then on to The Merkister where 700 or so Pochard were quite a spectacular sight. Loch of Bosquoy produced two drake Goosander, first for the winter and rather bizarrely the much travelled (around the county) Black Swan. 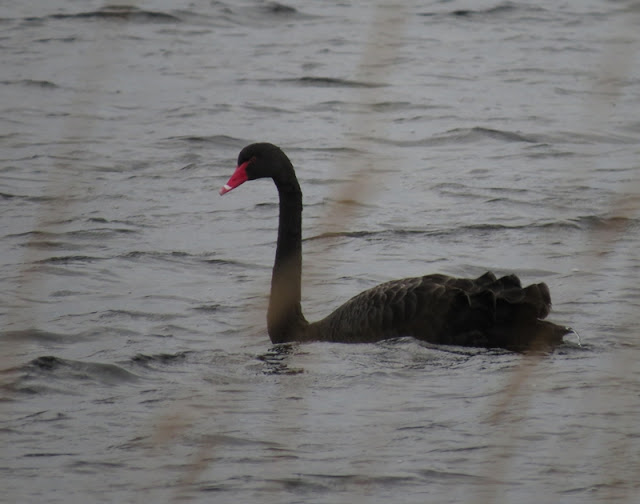 Then home for much searching for Woodcock (not found) and small birds, Blackcap, Brambling being the best. There were some great birds during the day, three Hen Harriers, a Shortie, four Kestrel sightings of at least two individuals. Interesting unseens were Song Thrush, Woodpig (which have left in the last week or so), Moorhen, Linnet (which I probably saw but they were distant in the neeps), Buzzard (which I saw but off patch whilst on an early afternoon errand). Right at the end of the afternoon a mystery warbler was feeding amongst the almost bare twigs of the Sycamores, too little light to identify. Interestingly this morning there was a Chiffchaff with the Blackcap, so that probably solves the mystery, it never pumped its tail usually a give away for a chiff. 53 species gave me a 50.96% #patchday score. 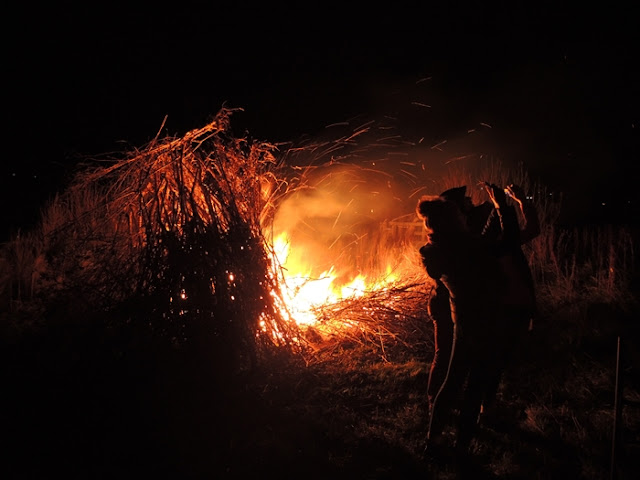 Today I spent a few hours at Birsay for 40 species, best being Pochard new for the year for that patch, a male Hen Harrier and two Red-throated Divers. 40.4% #patchday score. 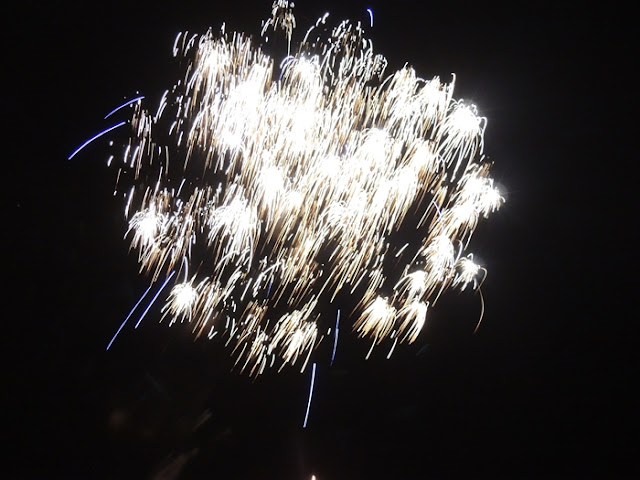 I ended up chairing the meeting about stoats yesterday evening and despite some concerns that it might easily become a mud-slinging fest' it was a very good meeting. The local SNH staff talked frankly about past failures and positively about the feasibility of eradicating this unwanted addition to our mammalian fauna. I was impressed by the analysis from SNH. I was very impressed by the contributions from the floor and general positive vibe of the meeting. At the end there were plenty of folk signing up to offer help with trapping, sightings, advice on traps. Having read the repeated and endless whining on Facebook about this issue the meeting was a breath of fresh air. Actually Facebook has been very, very useful in building the data set with which to base the report which should gain national SNH support and funding, so well done to MG for his initiative in setting up Stoats in Orkney ( https://www.facebook.com/groups/1541957316039219/?fref=ts ) and gaining many records which would have otherwise been lost.

I'll put stoat links in a place in the side panel.

Plenty of thrushes still passing through, many as I drove down the track this morn. Finally managed to get the car fixed today after it was backed into by a local coach... what a pain, thus transport problems have recently hindered birding activity.

Over the weekend there were interesting warblers in the garden, unfortunately I failed to nail the one... maybe it was a Hume's, no calling tho. I spent a lot of time searching for it and the chiff I'd seen very briefly, no further show. 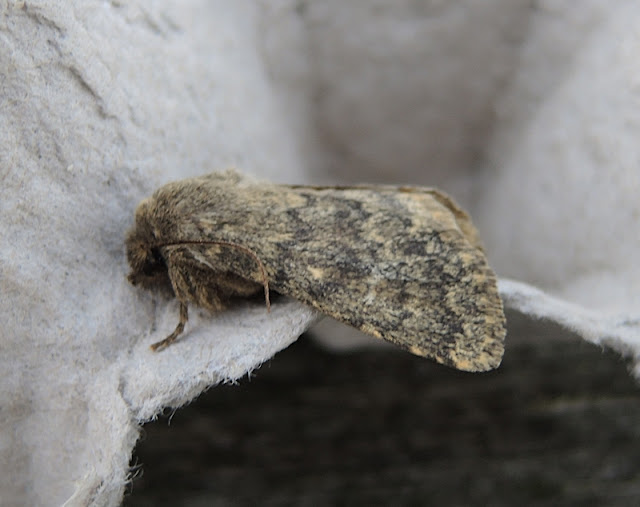 Not the best pic of Brindled Ochre as I sorted the trap before work on a morning this week, it is really rather dim at that time now. One of my favourite moths. 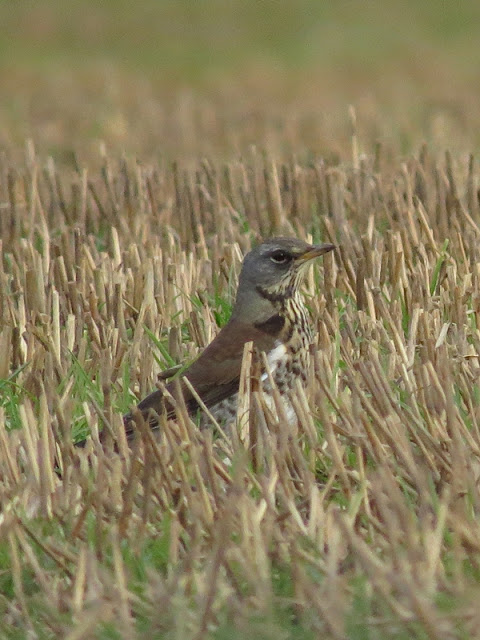 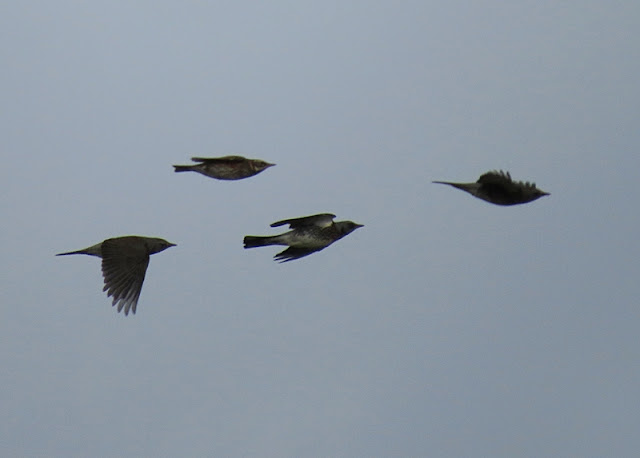 I love seeing the winter thrushes bombing by 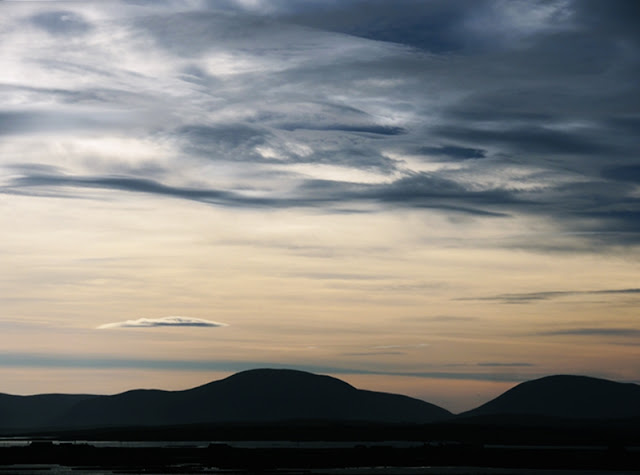 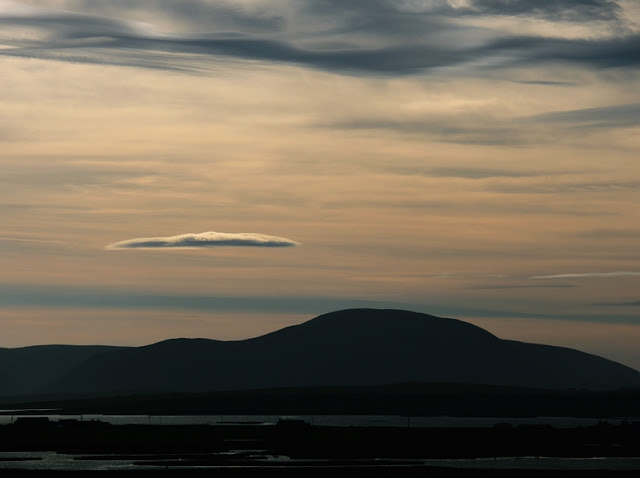 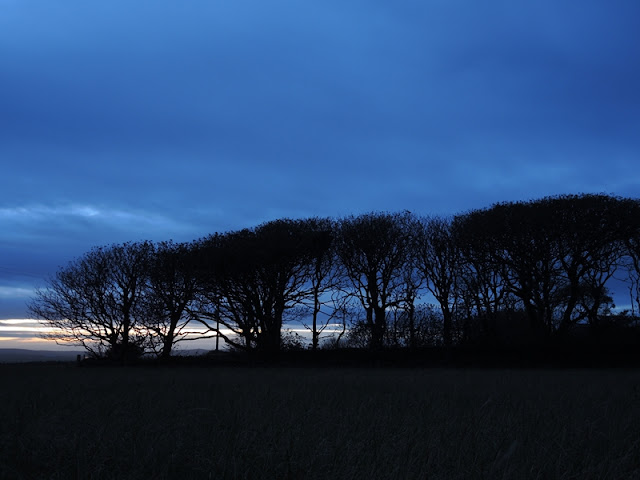