Well it wasn't a total nil result, although compared to RW on Westray for the last two weeks it was in comparison (750 LtSs). Trouble is its a busy time of year with work, and so I'm a bit knackered to be honest, and the folk festival is on. So an attempt Wednesday evening did produce three very nice, close enough Poms from Yesnaby. But the next evening I could ony spare 45 mins or so as we had tickets for the New Rope String Band  in the new Birsay Community Hall. Of course 10 mins after I left five Lon-tails came through, and later on there were a good many more. However, when did I ever laugh so much? Oh yea, the last time I saw NRSB - here's a taster (and do give it a few mins, you don't get the whole joke on YouTube as you don't have the context of the earlier stunts but it's still pretty funny) http://www.youtube.com/watch?v=yU2-SLYoOfY

Other birds... well there was a whitethroat singing in the garden for about a minute this afternoon, only the second one since we've been here. Various things have chicks, including teal down on The Shunan. Male Hen Harrier around the garden about three times today with a ring-tail as well once. There continue to be Common Redpolll at the niger feeder daily, one of which is ringed, it would be nice to retrap that... The rooks have had branchers for a fortnight now.

SE blowing this evening and will continue the next two days, looks like I might be too late on NRon, where I'm booked in for next weekend, however, quite often the rares turn up a bit later but anyway it'll be two days of full on birding, something I've not done for a while.

Pix to follow, while you're waiting why not try a spot of musical tennis....http://www.youtube.com/watch?v=FC38nJsW7bQ
Posted by Alastair at 10:50 pm No comments:

Driving from a seawatch at Yesnaby to The Loons yesterday evening, and a good job I was going slow by Loch of Skaill as a big dog otter was in the road. He slipped down the bank and I stopped. Thinking that was it and he would have nipped off unseen below the bank I was about to drive off when up he popped up a few feet away in the loch and gave me a look. He dived, then up again, staring at me and me at him. We played this game for a few minutes before he got bored and dived away. 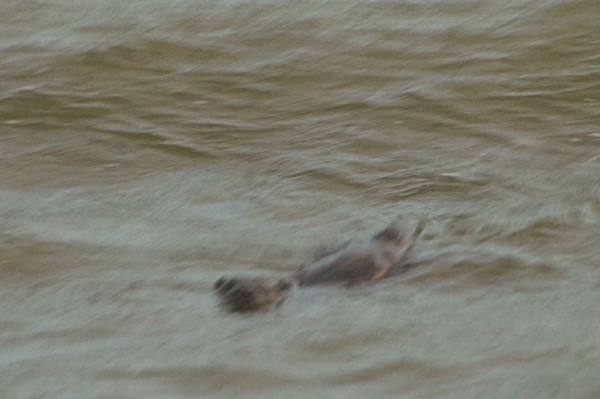 Here's the proof, not the most wonderful pic though...

The redpoll was joined by two more, slightly better photos of them. The rump and back certainly have a white ground colour even if they are heavily streaked, islandica I reckon. 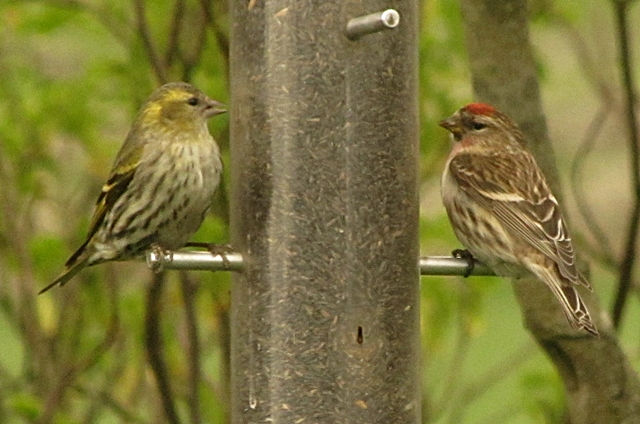 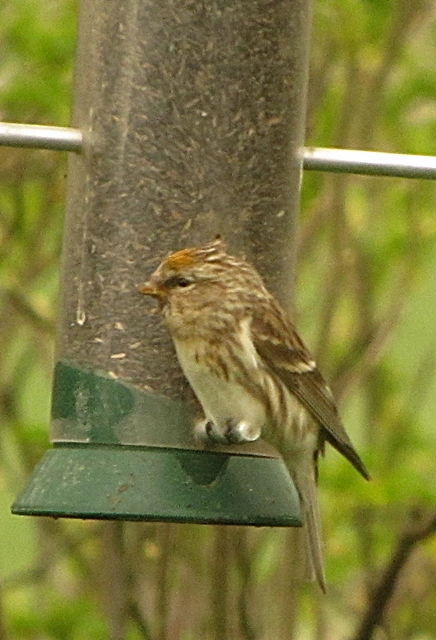 Various pictures of the three 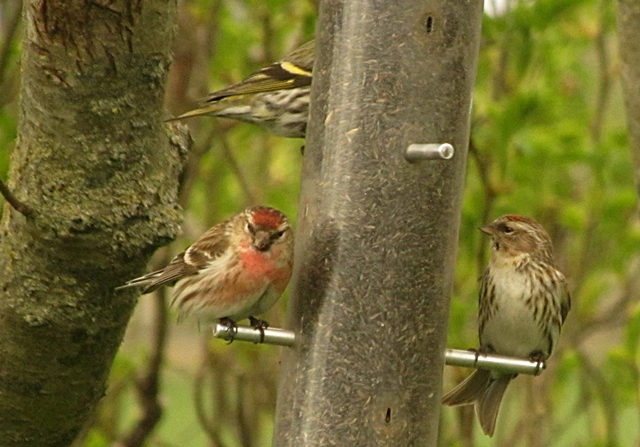 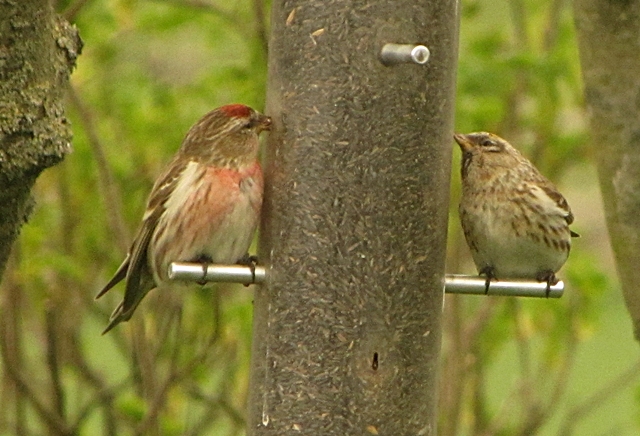 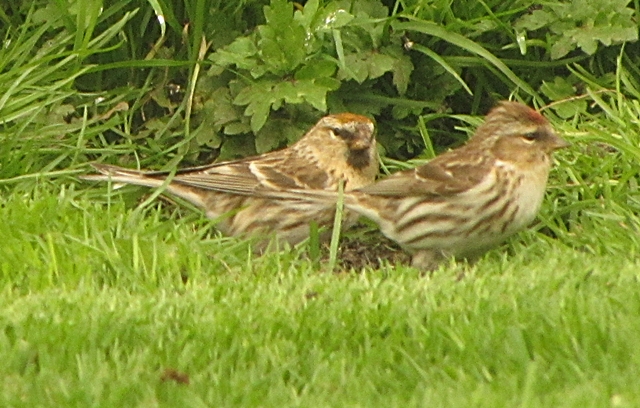 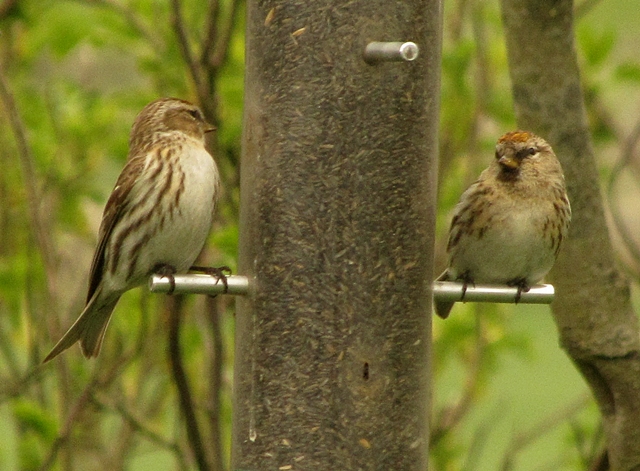 Also yesterday an Arctic tern on The Shunan, a House Martin through the garden. The seawatch at Yesnaby produced about 40 Bonxies going south, uncountable as most were above my head and I was staring out looking for distant Poms.

Lots of finches in the garden today including an interesting redpoll, identifications in the comments below appreciated. My own view is Common, probably Icelandic, but I'm very happy to stand corrected. Also 4 Siskin, a Goldfinch, two Linnet, a Twite and the usual Greenfinches. The Tree Sparrow was also present. 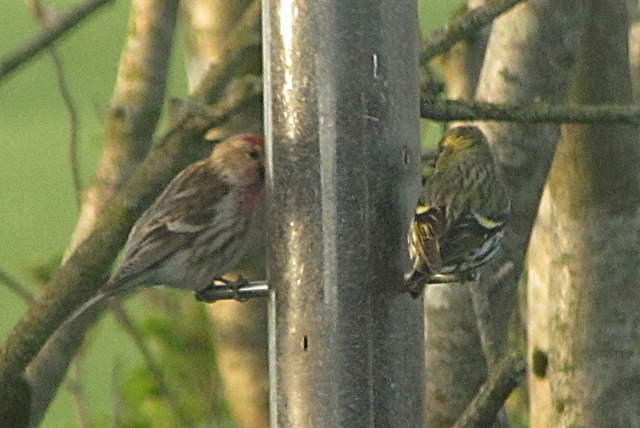 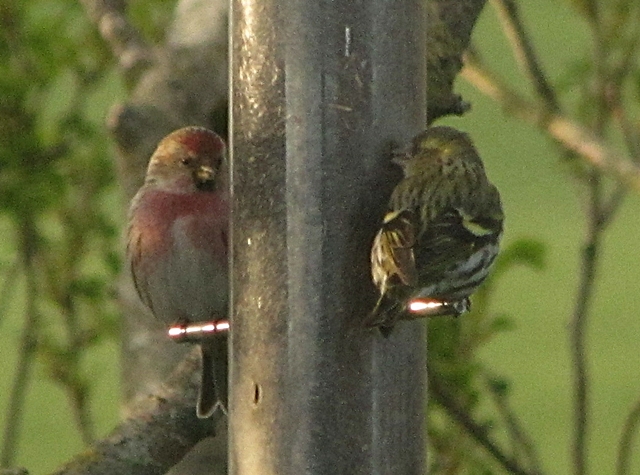 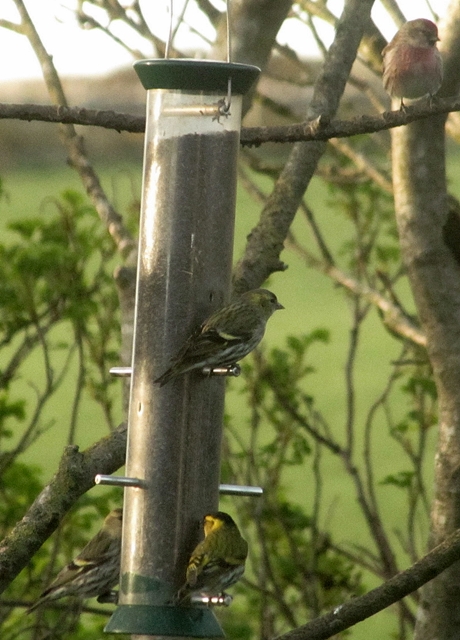 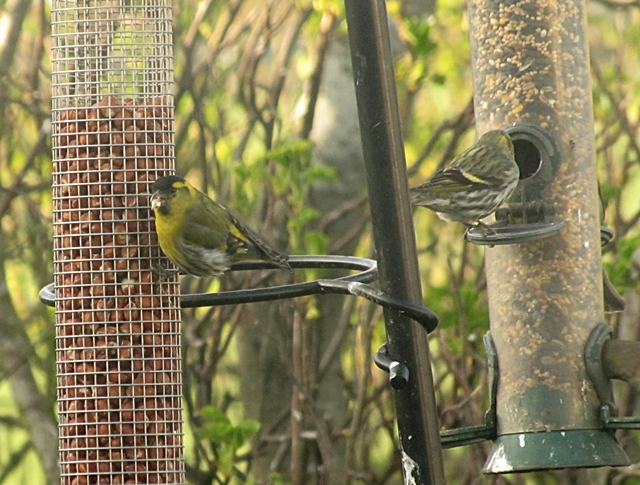 On The Shunan there were six gadwall and three Dunlin. The Shunan has been a bit of a duck Meccca of late with nearly all of the commoner species present at some time in the last week including at least two pairs of pintail and two pairs of Shoveler. The male Red-breasted Merganser contiunes to pop across from Loch of Bosquoy every now and then.

On the duck theme here are some Eider at Birsay I snapped this week. 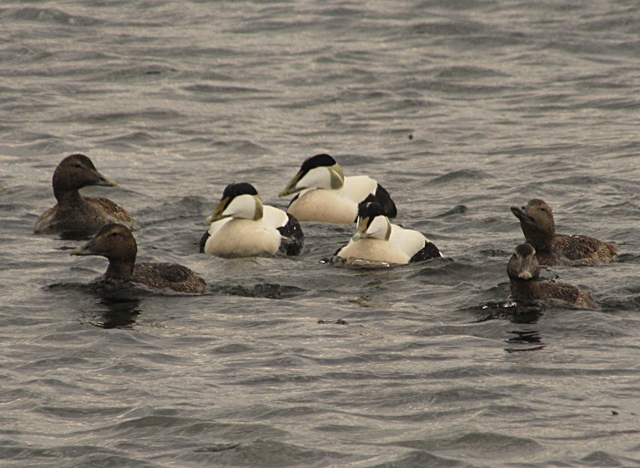 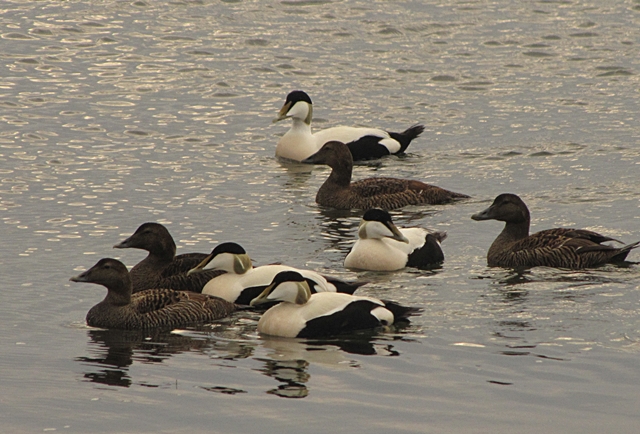 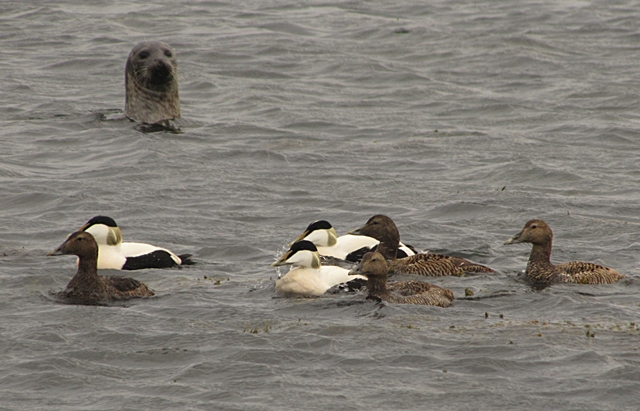 And some other recent photos... 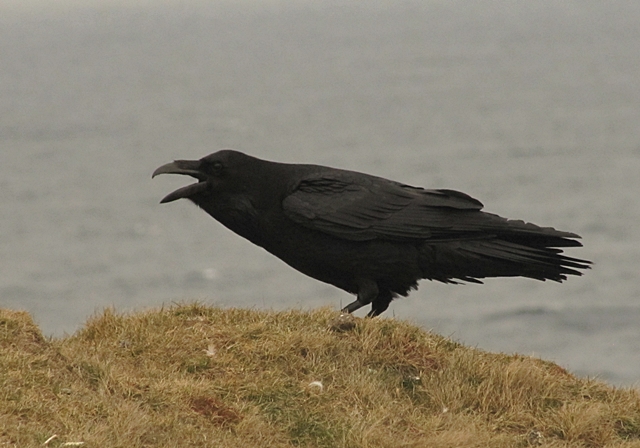 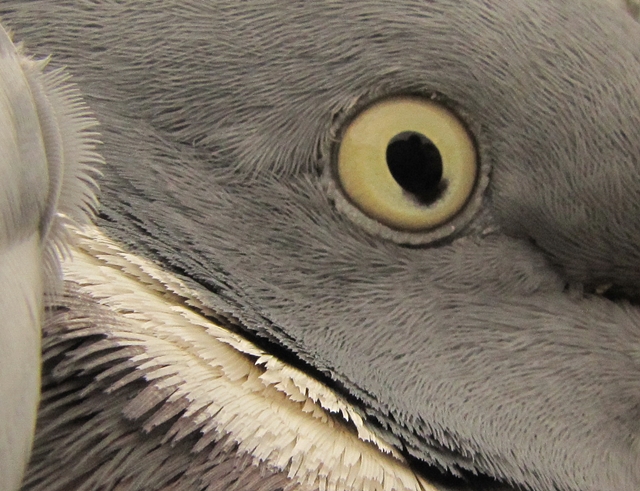 After the disappointment of dipping the Black Kite on Wednesday, it probably flew over the meeting I was in, I needed a bit of a perk. Mid afternoon yesterday a text came in Orcas were heading for Orphir from Stromness. Too much work though, so I couldn't go then. A couple of hours later and another text, the pod were in Clestrain Sound heading for Mainland. The nerve broke and I headed off for Brig o'Waithe. Although the house is 7 or 8 clicks from the sea it is possible to see a chunk of the sound from our garden but I wanted a better view than that. The sound is well viewable from the Orphir road and after a couple of clicks or so I pulled in to a gateway. A quick scan with the bins and under the bow of the pilot boat there were fins. Quick with the scope and good views of a pod of eight or nine. Certainly one male, maybe two, the pod of eight or nine included females with young. Excellent views for a while then the pod headed north and looked to be off Pt of Ness, Stromness. I decided to move and hope for closer views but when I got there no sign and no sign out in Hoy Sound either. Magic moments though. Reckon I would have been able to get them as a garden tick as well...

What no pix? Well they were a mile away.

Also in the sound both Common and Arctic Terns, mostly heading south, perhaps these have come north around Hoy and up through Hoy Sound.
Posted by Alastair at 6:09 pm 3 comments: