It has to be mentioned, Covid-19, as the impact is frightening, in all kinds of ways. Doing much of my wildlife hunting around home these days the personal inconvenience is not as significant as it might have been in the past, with regard to limiting my movements and driving me mad. That's a selfish and trivial impact except when it is considered in the light of our right to freedom of movement, it will be interesting to see what happens in the aftermath, I have concerns. The deaths will involve many private and personal tragedies, especially with the loss of mourning and being able to say goodbye properly. The economic impact is nothing short of terrifying, I think my children's children will be paying for this when they are middle-aged, perhaps that's a bit pessimistic - or not. Here in Orkney the whole tourist industry is in jeopardy, especially our cafes, pubs and restaurants. 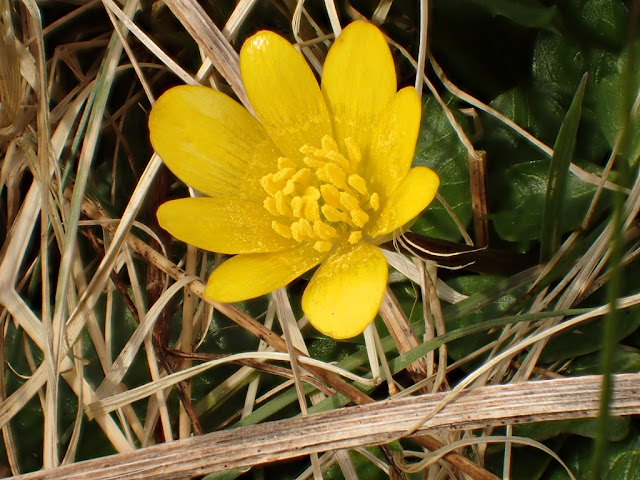 On a more cheery note, there are exciting things happening around and about in"the wild". Our garden and the surrounding fields are getting even more attention than usual and I'm looking forward to the end of term in a week. 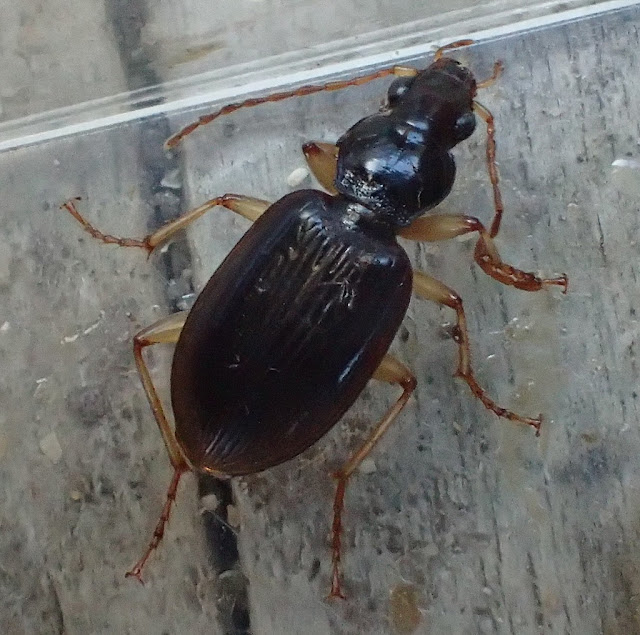 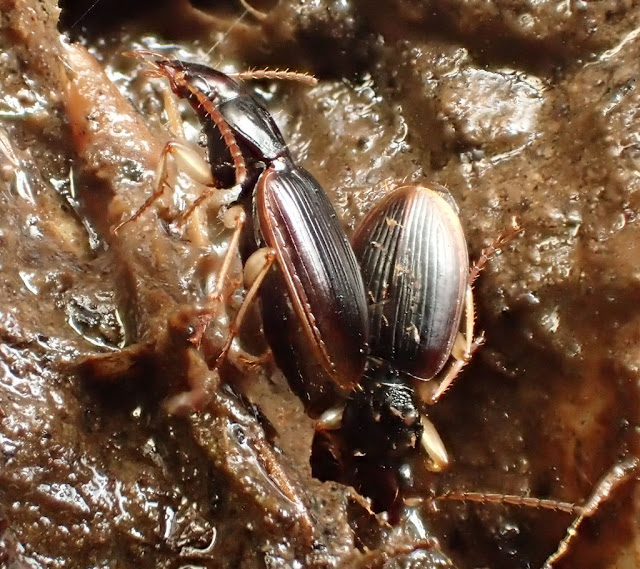 Paranchus albipes, a common enough Carabid but I'd not previously found it on the patch. 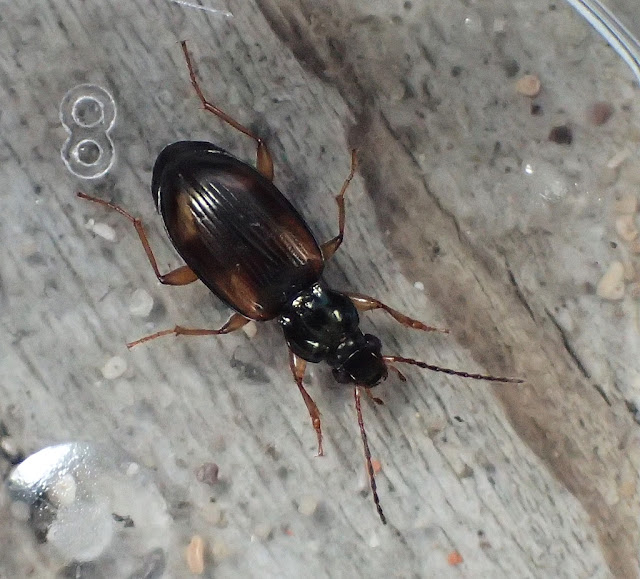 Bembidion bruxellense, I have found this here before but in litter, this was in the burn's gravel, 2nd county record. 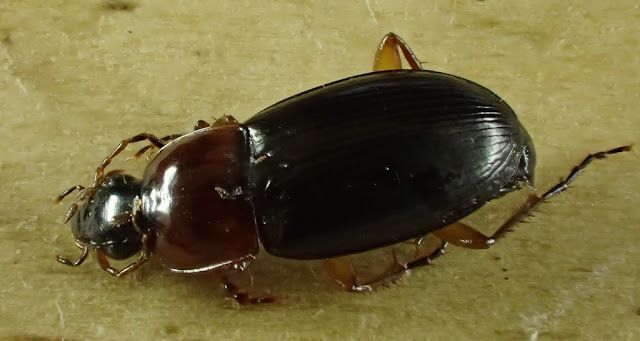 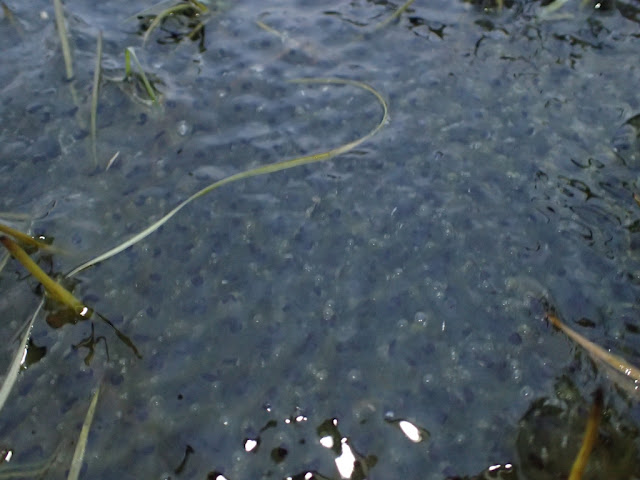 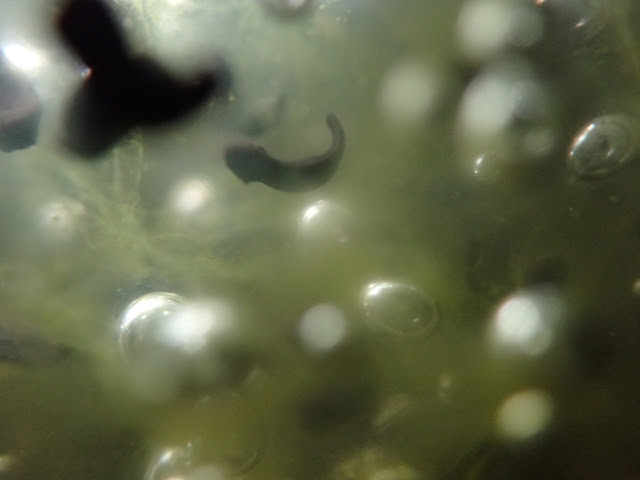 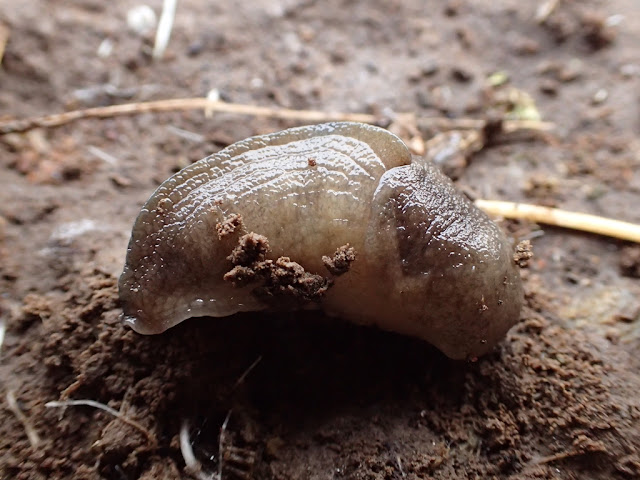 Milax gigantes, NFM and new for the patch. 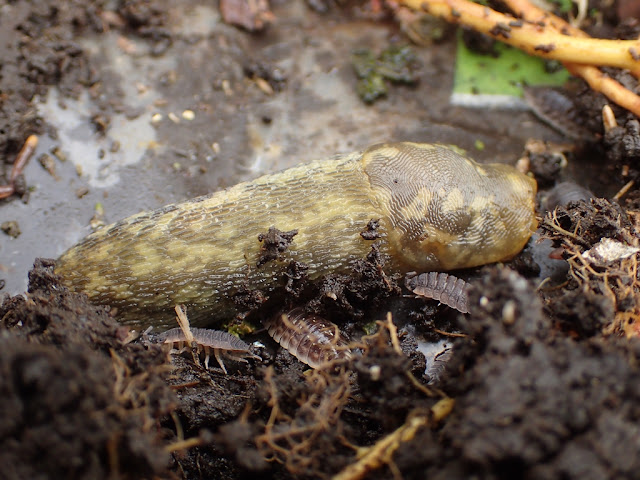 One attempt with a light trap, but a bit half-hearted I brought it in at midnight, a blank. It has been so cold here, and rained a lot.

Not much avian to report, Kestrel, a migrant, Pintail, a pair briefly. The Oystercatchers always lift the spirits though.

A certain feel of Spring in the air....

There were moments at the weekend where it almost felt the Winter was past, but then five minutes later and it was back. The weekend weather has been grim the last few weeks, I really haven't felt much like hunting for small beasts and the opportunity to put moth traps out has been nil.

The week started in a grim manner with an ermine Stoat seen carrying an Orkney Vole across the road in front of the car as I drove to work. More optomistic at the beginning of this week with a frog leaping across the road in the night, heading for The Shunan, or Para Shun. I've seen two frogs heading in that direction this year so I suspect that some breeding may be taking place there. This is only the second year I've seen frogs on the site, the first three records were last year. Another good sighting this week was a pair of Pintail on the Shunan, from the car as I headed to work.

On Thursday and Friday some fields were ploughed so there were huge numbers of gulls and Lesser Black-backs appeared in some numbers. Saturday's walk in the afternoon produced a smart female Merlin.

On Sunday the Spring feeling was there with Skylark singing, Redshank and Lapwing displaying, Curlew staking out territory, Moorhen on site, Song Thrush singing (four of these species were firsts for the year). The Linnet flock had split with 30 or so still in the crop field but 50 odd just outwith the garden, feeding behind the trees. Pink-feet are on the move with a few hundred up the hill, behind the house, three or four in the immediate fields and the occasional small flock flying over. 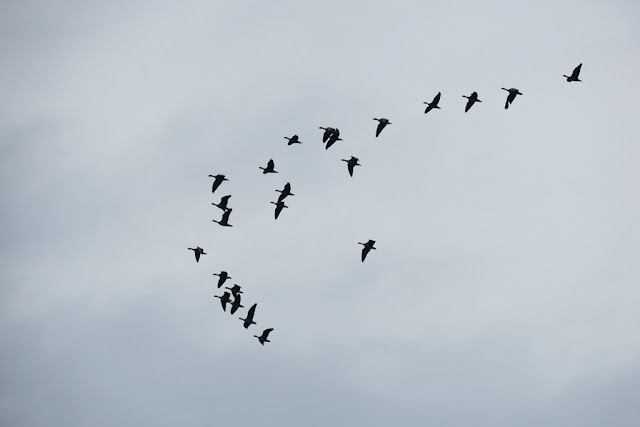 The Rooks were disturbed all last week as the Hydro were putting the last touches to the 3-phase installation for next door and putting our supply underground. This may secure our supply a little better, although it is on poles until it gets to hal a mile from us. No Rooks seen collecting sticks yet.

Older daughter arrived home on Sunday, earlier than expected as GSA called a reading week and there was no food in the shops in central Glasgow. 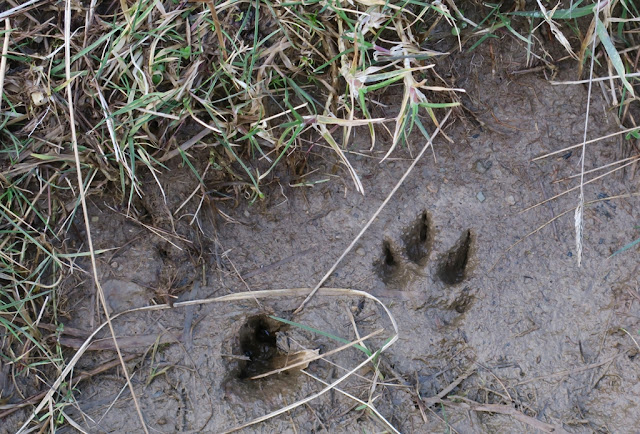 It's a long time since I've seen an Otter in the flesh on the patch, I need to get out earlier maybe.

On Sunday I headed to the coast for a bit of a wander with the hound. Not much to show for it, but pleasant enough. The Snow Bunts appear to have disappeared. 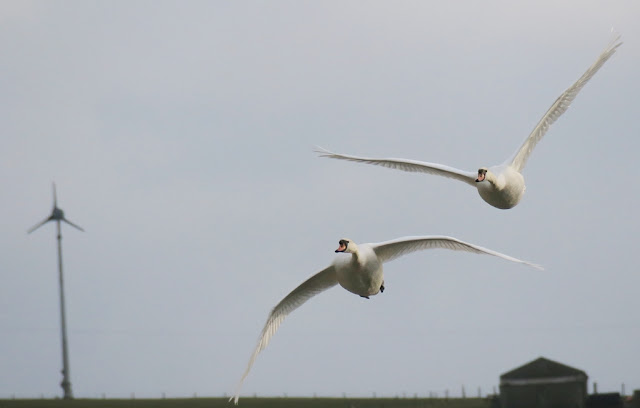 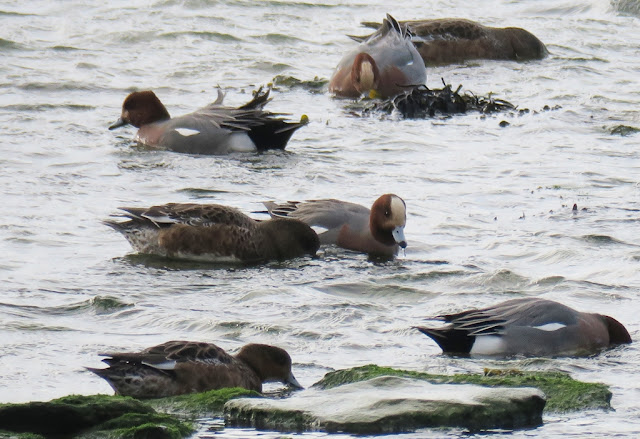 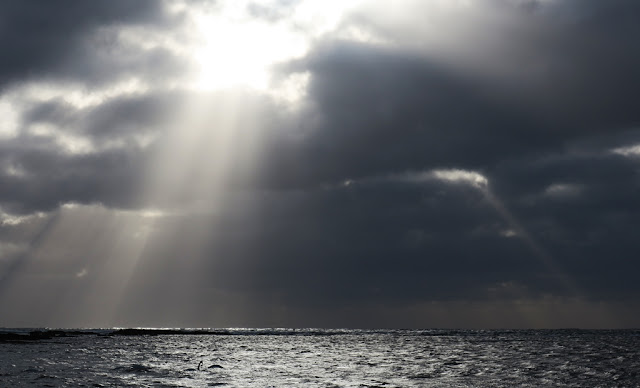 Mute Swans on the sea, Birsay.
Posted by Alastair at 11:01 pm No comments:

I had to go to Inverness. A new floater in my left eye (I've been troubled by these annoying things for years) got me to the GP, following a look at the excellent NHS website on this problem. The GP sent me to the optician, who wasn't quite sure, this on Wednesday and Friday, and by Tuesday I was on the plane and headed for the Opthalmology Dept of Inverness Hospital. Beautiful clear skies for much of both flights. 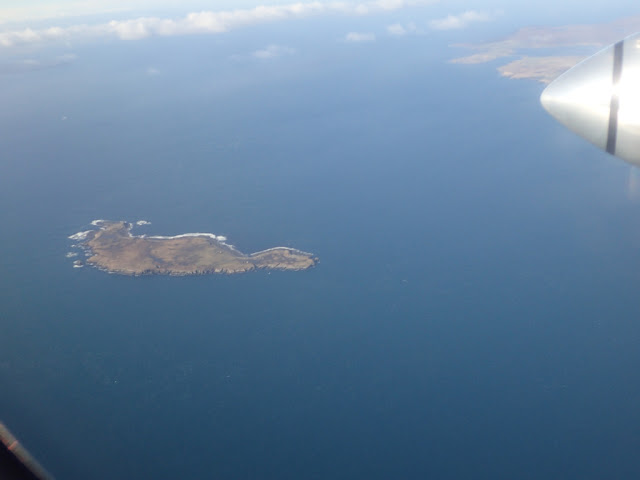 Swona, the most southerly island of Orkney and one that is tricky to get to. It is uninhabited but interestingly has a herd of 18 - 20, now wild, cattle that have survived since it was abandoned (not the same individual critters, but their offspring). I'd really like to go there but it is a bit of a bugger to get to. 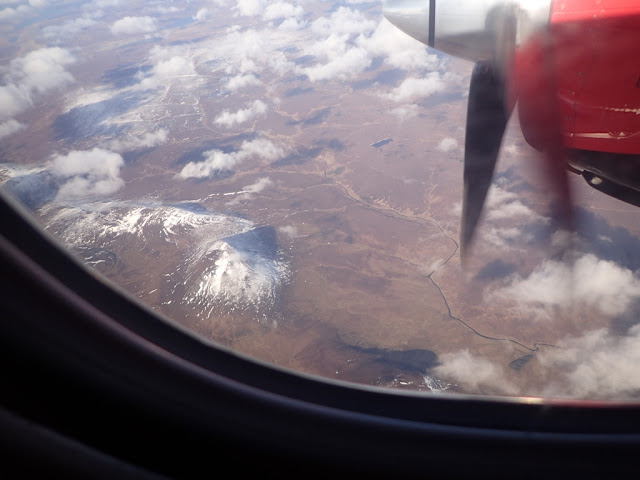 I failed to see Magpie, amazingly, but did manage to hear Blue Tit. No time for much though.

Just one person out and about with a face mask, and they didn't have it on properly. I'd half expected to see folk walking around the streets with face masks on.

The previous few days haven't provided much, I will try and get this (what I think is a) slime mold identified though. Not sure about the black stuff, maybe another slime mold. 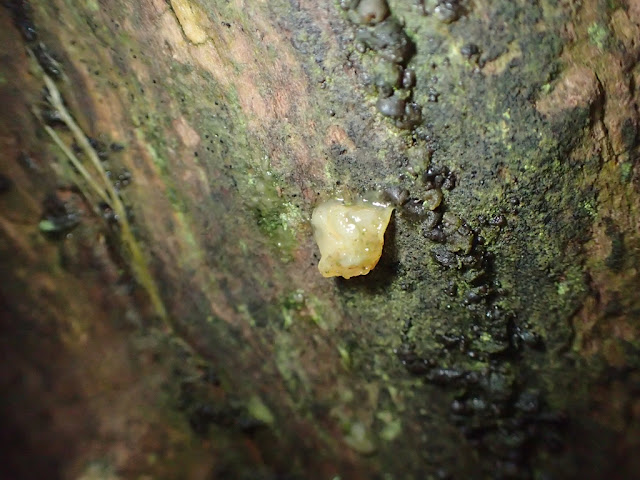 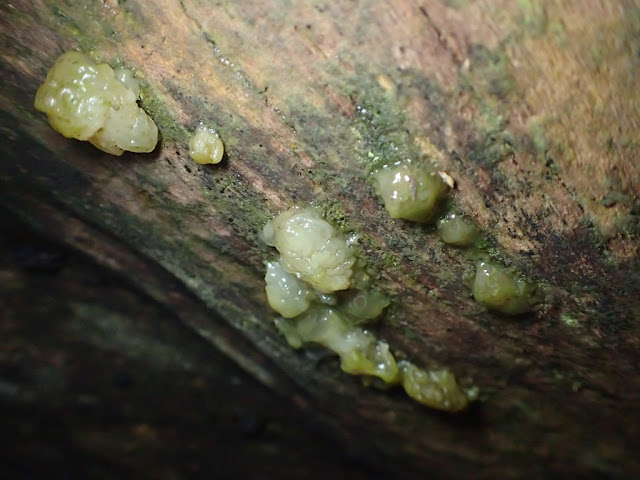 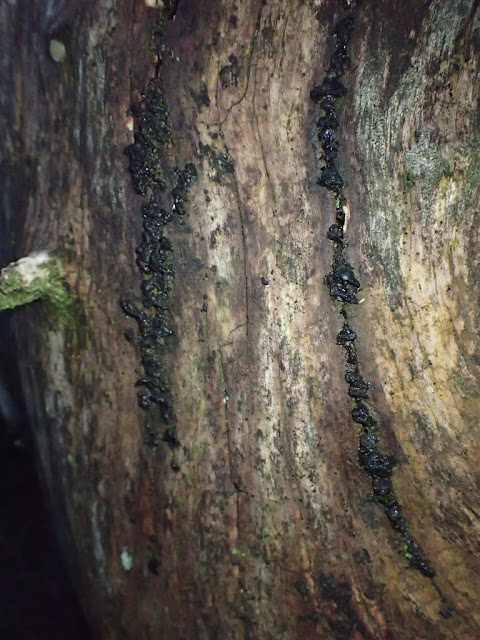 I did add Stonechat to the 1km sq species list this afternoon though when I had a bit of a wander about, late afternoon. Since Thursday Oystercatchers have been here in force, 60 then, 110 today. Lot of Curlew now and Lapwing on territory. So it is noisy around the house all the time now, Oystercatchers calling all the time. They have become one of my favourite birds since moving here. Their arrival in force signals Spring and their disappearence Autumn.

The good news is the eyes are ok, no retina damage, which is the possible problem with the appearance of new floaters. So no lasering, which was a bit of a relief.
Posted by Alastair at 11:07 pm 2 comments: