Trying very hard over the last few days to add to my Patchwork Challenge total, December so far being the only month where I have not added additional species. A mid-month dip in the shape of Mistle Thrush on the lawn was the closest I had come. And then this morning, doing the ponies, a small gaggle of geese went over, 21 flew right by but two turned away and headed south, one of those two was not a Pinkie (which all the others were), neither was it a Greylag, but I just couldn't nail it due to the light and the direction of flight, I'm thinking whitefront but....

Here are some photos of an interesting crow at the PDC yesterday. It just shows how easy it is to pass hybrids off as Hoodies. This is quite a subtle hybrid. 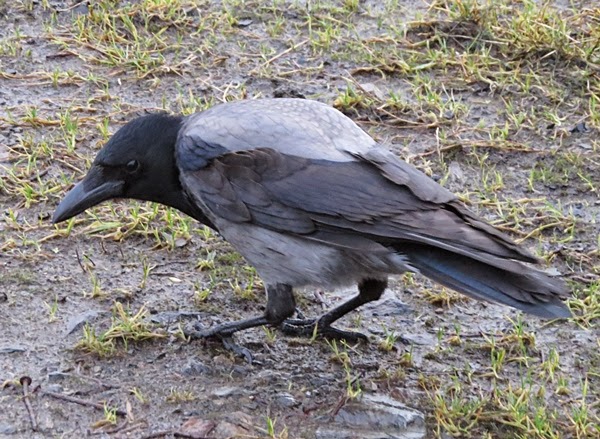 Looks like a Hoodie (however, the central streak on that feather above the near leg is too broad) 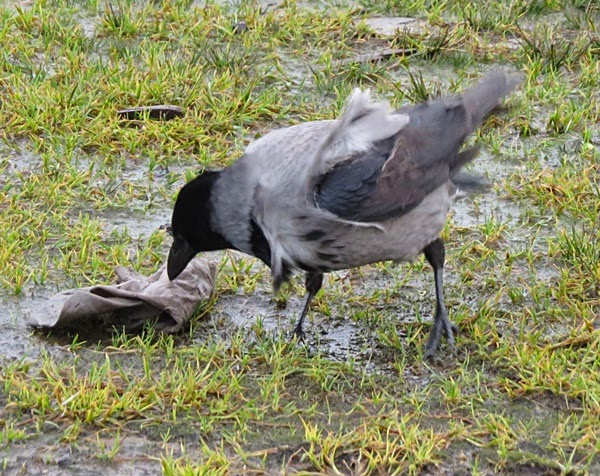 Now its true identity is revealed, but these feather were very hard to see from other views 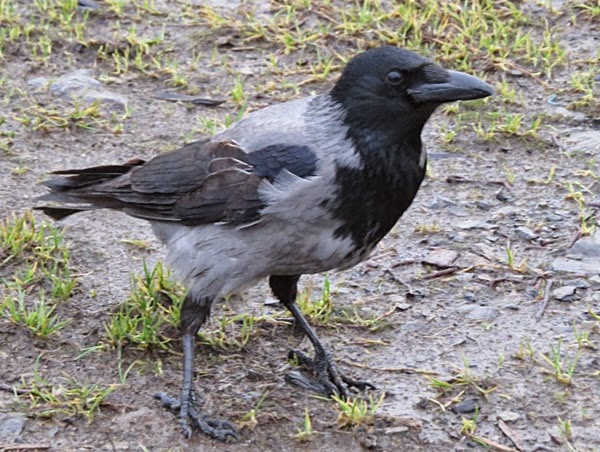 A good clue is the way the black and grey "join" at the nape. It should present as a very distinct, clear demarcation, unlike this. A rider to this is that in July Hoodie juveniles are similarly marked.

Patch round-up
2014 was the fifth complete year on the patch, the actual starting date was October 2009. The patch total of species for the year was 117 (plus tristis Chiffchaff), Patchwork Challenge points 169. New species added to the patch list this year: Garganey, Blue-winged Teal (twice), Common Scoter, Water Rail, Red-footed Falcon, Great Grey Shrike, Blue Tit, Lapland Bunting and subspecies Redpoll, C.f.islandica. Also seen this year and worth mentioning, Marsh Harrier, Corncrake, Curlew Sandpiper, Green Sandpiper, Greenshank, Wood Sandpiper, Jack Snipe, Kittiwake, Iceland Gull, an unclaimed Glaucous Gull (seen whilst having a bath, that's me not the gull), Waxwing, Ring Ouzel, Stonechat and  Grey Wagtail. Dips I'm aware of were Snow Goose (of German provenance most likely) and Mistle Thrush. Since October 2009 I've seen 146 species from the patch (includes Gannet and Shag which are viewable with persistence by scanning Clestrain Sound 8km away - not included in this year's total). To my knowledge 153 species have occurred during that time (I've excluded the Snow Geese). 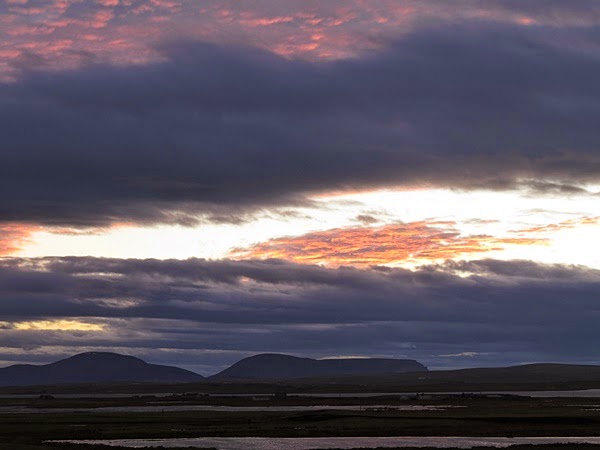 The last of the day, New Year's Eve
Posted by Alastair at 6:24 pm No comments:

Ouch!! Just not careful enough on the very icy track this morn, fortunately none of me or of my gear broken, ****** hurt though.

It was worth going out. I had to approach Bosquoy from across the fields as the track down there was just ice. This route gives a nice elevated view over the loch and having checked and counted the wildfowl I noticed a bit of a splash to my left. Watched the dog otter for about an hour. Managed to walk closer, he was quite aware that Cora and I were there but just ignored us.

Video quality a bit naff as I'm not used to using it. 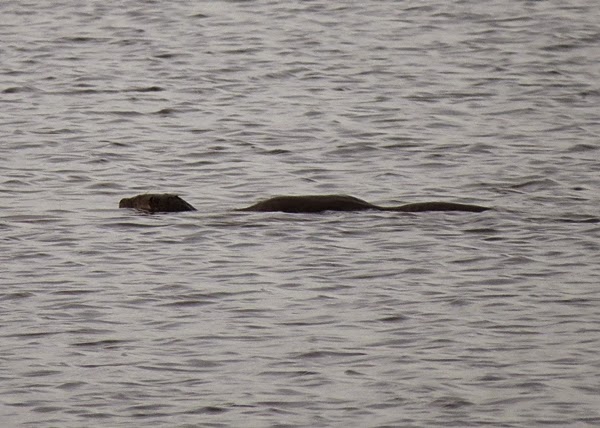 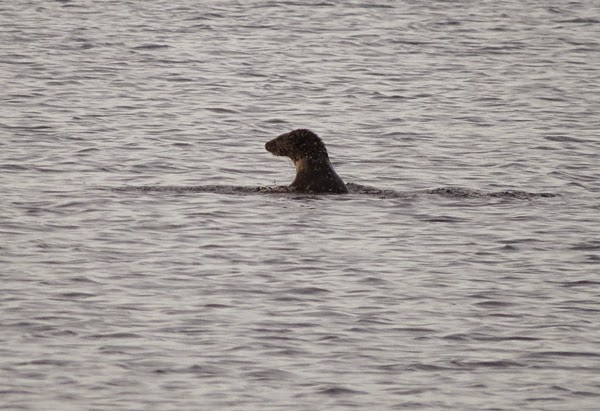 The photos aren't much better to be honest 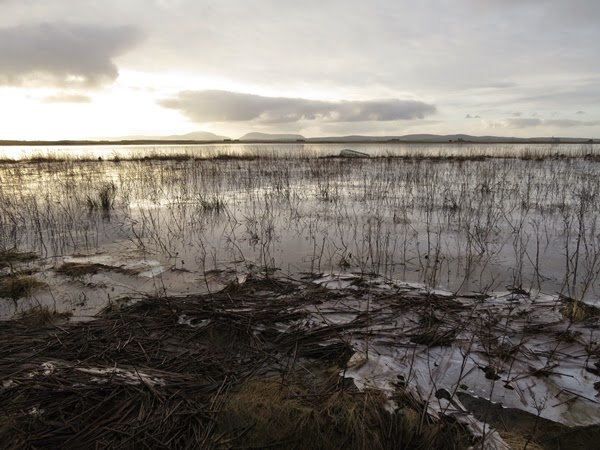 Also down there a Jack Snipe.

On to Palace after lunch, and the Snow Bunting flock had grown. Other suspicious looking characters down there that will require further checking, a few bits and bods bombing about that I failed to get on to. 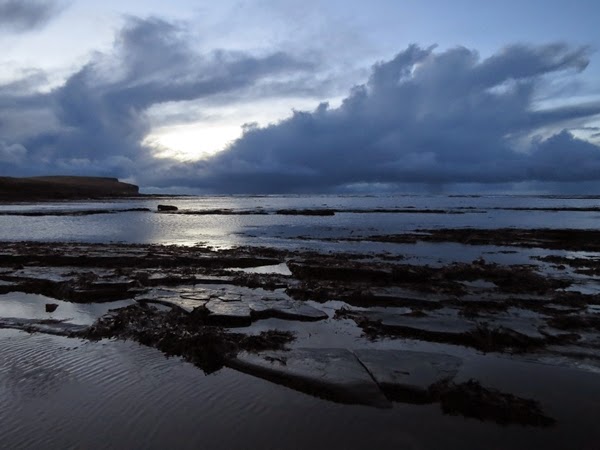 Then to Stromness where the adult Iceland Gull showed briefly before flying off to roost.

Posted by Alastair at 9:35 pm No comments:

A Woodcock was star bird of the day, flushed from the garden. Also nine Brambling, a Hen Harrier that tried to join us in the kitchen and the three Whoopers, two ads and a juv were still on The Shunan. It's very, very cold. 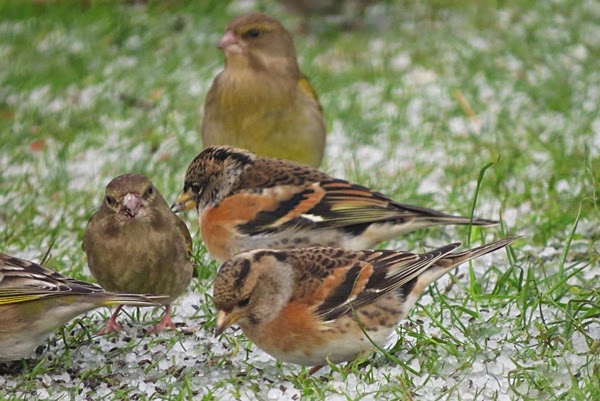 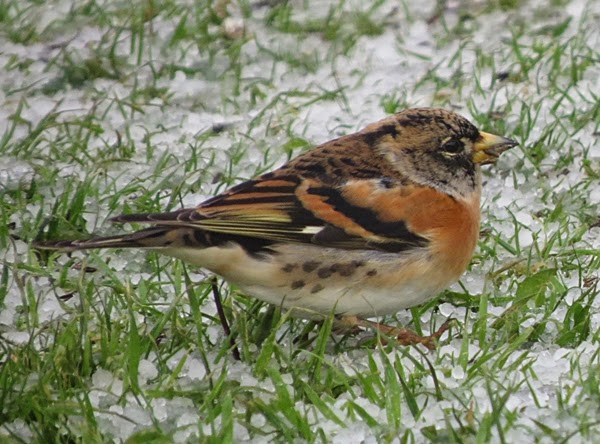 And here's another pic from the GoPro yesterday.... 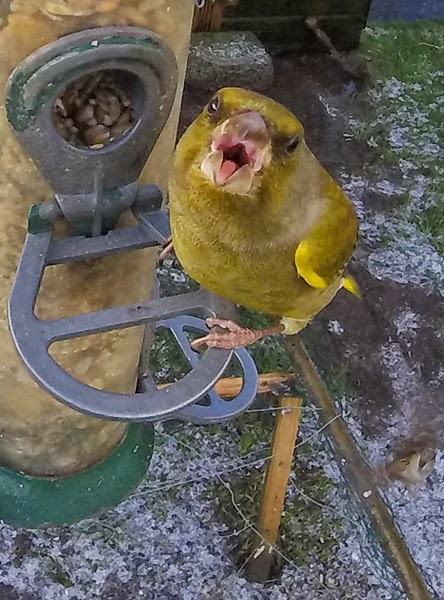 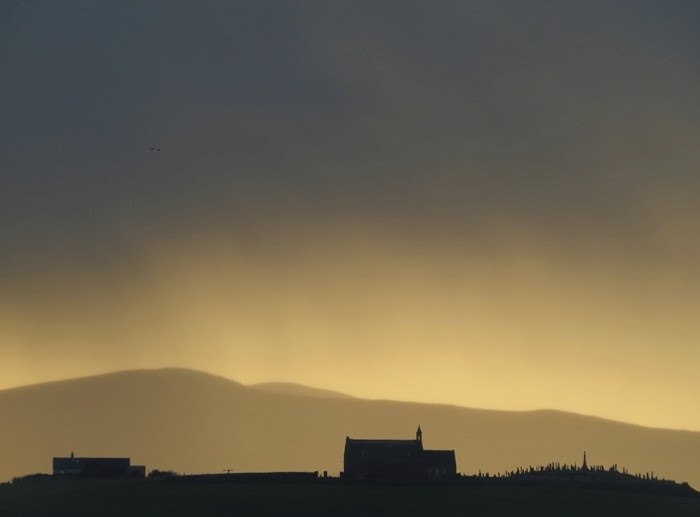 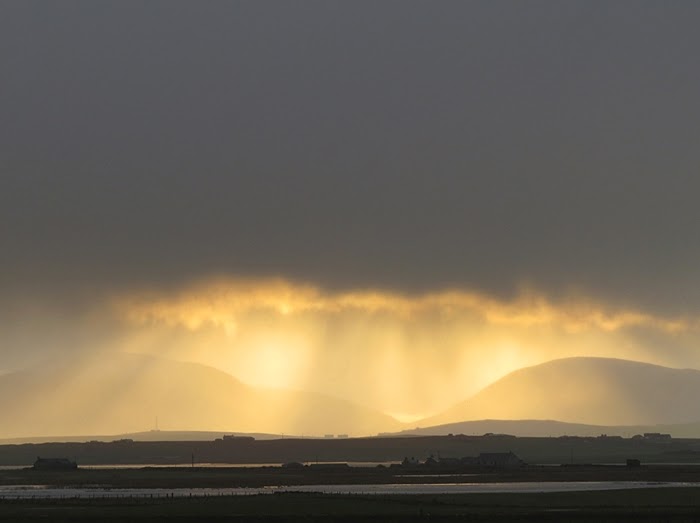 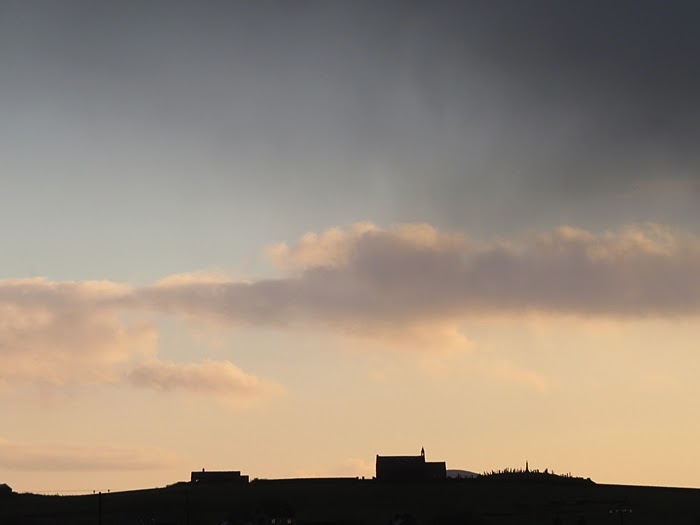 Here are a couple of stills taken with my new toy (basic GoPro Hero). 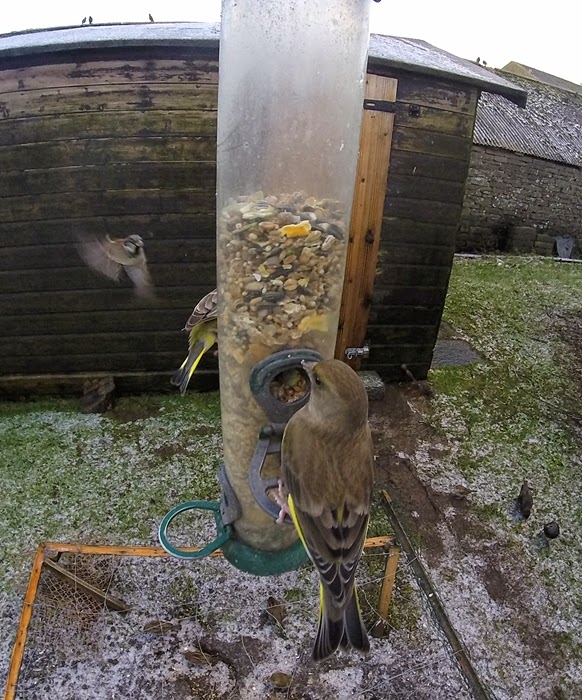 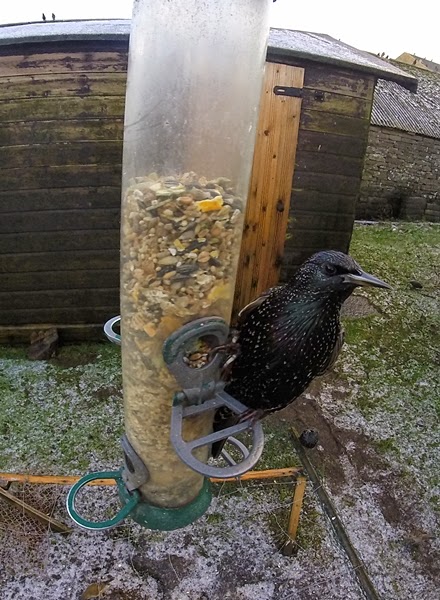 Posted by Alastair at 5:21 pm No comments:

A bit of an aurora Sunday night, then last night we dipped, as the cloud came in by the time we were on the case. Hopes for tonight as it is supposed to clear, we'll see.

Still a lot of Blackbirds about, 14 at Howaback yesterday with Redwings and the occasional Fieldfare. Flock of 16 Fieldfares today up the track in Mirbister. Best birds today were 24 Snow Buntings on The Links, it would be nice if they stayed for the New Year.

Patchwork Challenge is drawing to a close and it may be that this will be the first month of the year that I don't add to my patch total. Louise did find a Mistle Thrush in the garden earlier in the month but I was too slow responding to her text.... Still a few days to go, maybe Bosquoy will turn something more up. next year I've entered to cover two patches, the old Palace patch will receive more attention, 2013 was relatively disappointing there so I won't have a huge target to surmount. The home, Harray patch, has received much of my attention this year and it has been a record year with 118 species so far, plenty of new ones too.

ISS just sailed by plus two other satellites over just after, heading north those. 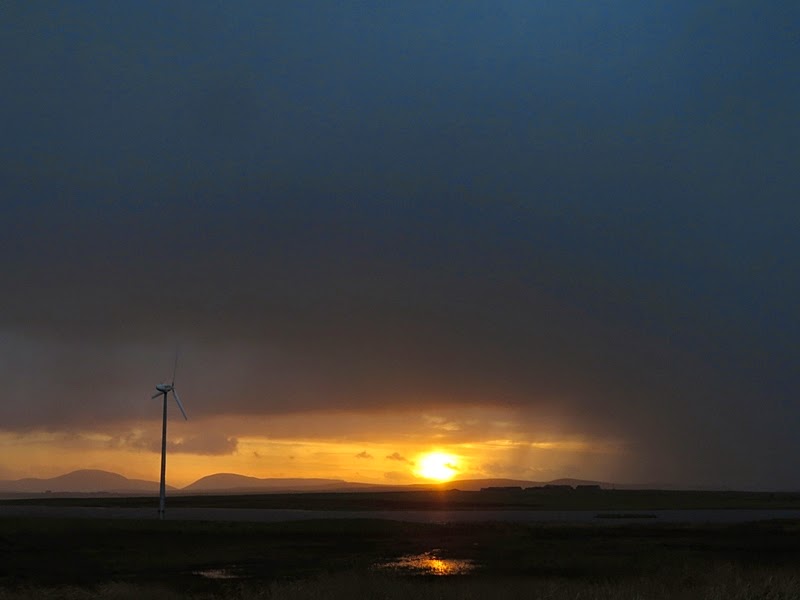 ....has indeed arrived. Managed the WeBS yesterday, where Bosquoy produced three drake Goosander, two Jack Snipe and a Stonechat and Sabiston a nice flock of 40 Whoopers which included four small broods. It was windy today, at one point had a serious struggle with the car door, like a tug-o-war, happily I won. More lightening and intermittent electricity, snow, hail and by the sea massive waves. Progress with bathroom - quite good.
Posted by Alastair at 10:13 pm No comments:

Mostly lightning (which closed work) the wind was not so fierce, however, the swell was mighty.

Perhaps not the best place to park.... 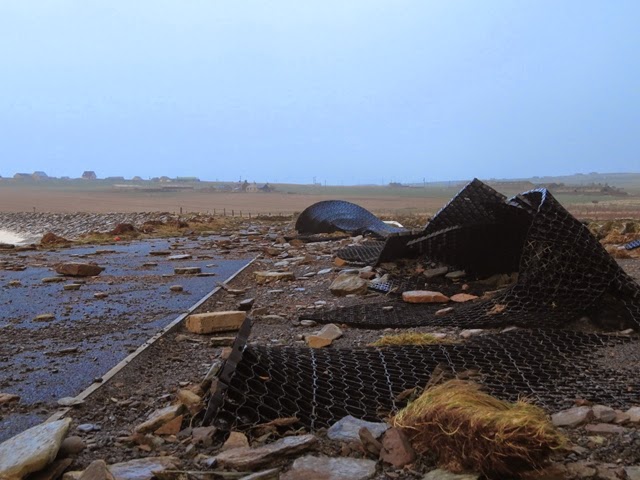 Difficult to park in the lovely new car park by the sea. 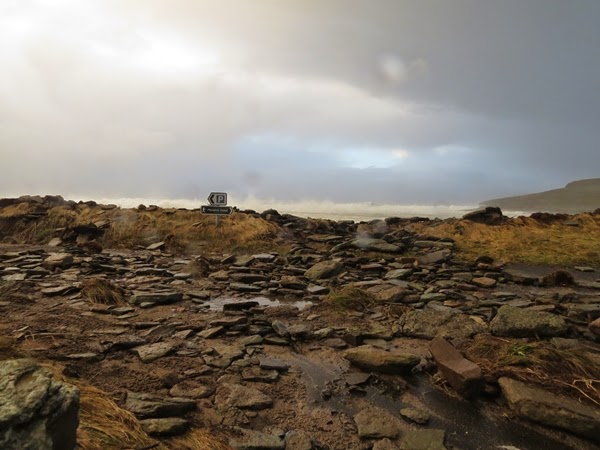 Getting to the car park might be a tad challenging. 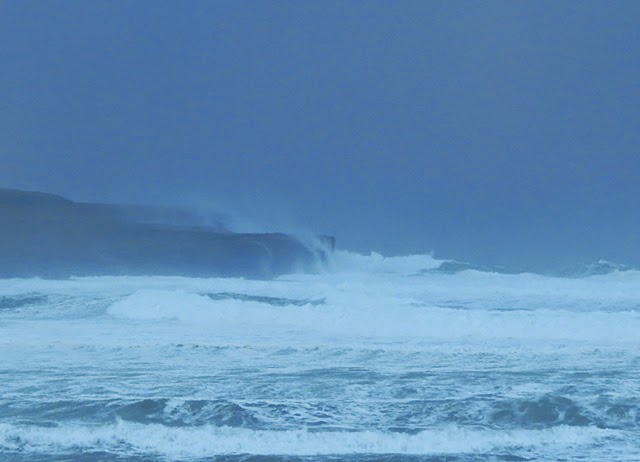