Struggled through the snow and ice to Stromness for an afternoon and lunch out. Eventually the Iceland Gull put in a fleeting appearance, appearing from nowhere it flew a few feet over my head and then disappeared behind the ferry terminal. I had been hoping to get a good enough view to age this bird properly as there seems to be some disagreement about its years, or maybe there are two? Unfortunately the view was inconclusive except to say it's not an adult.

A few other bits and bods around the harbour including a Pied Wagtail, I haven't seen one of those for a while. A grebe on the far side defied ID (no scope). 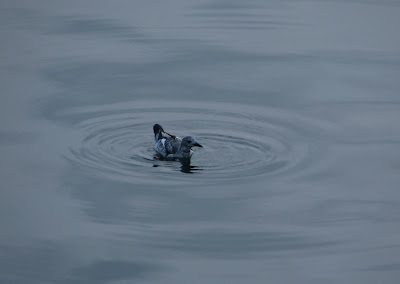 There were a few of these.

Getting the rug and other shopping home was a bit of a laugh but with two sledges and willing offspring to pull them ....
Posted by Alastair at 6:22 pm No comments:

Stonechat in the garden, a smart male, this afternoon. No doubt the snow and ice had something to do with that.
Posted by Alastair at 11:01 pm No comments:

They say it's not usually like this, the winter is characterised by rain, torrents of it, but this is cold. Snow fell overnight, that's made a crust over the ice and walking is more comfortable again.

A small falcon went through the garden, too quick, defying ID. Loch of Bosquoy still has a good open pool, it appears slightly larger today and there are still at least three Slavonian Grebes on there, watched from the warmth of the kitchen. Also on LoB today, Goldeneye, Tufted, Pochard, Teal and a few hundred Wigeon. House Sparrows around the feeder make a new record of 65 and there is one Dunnock still.

Louise's sister began her journey out of here by tractor yesterday. What a contrast with East Mainland, we nipped down to Deerness for a brief seaside walk after our trip to the airport. 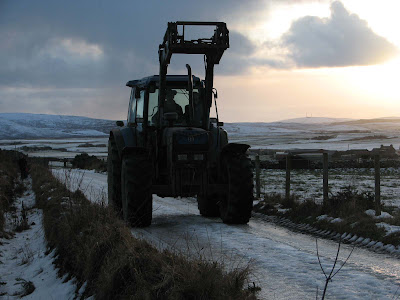 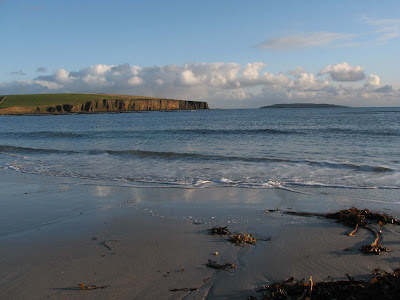 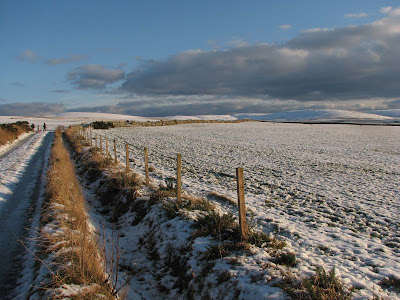 The top way out - achieved with the help of JC + tractor 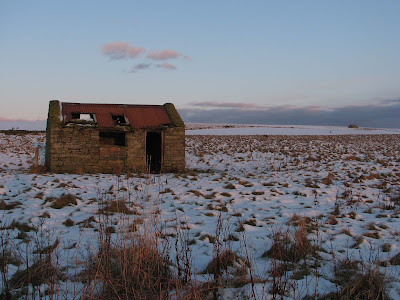 It's got rather chilly here in the north, too chilly as everything is freezing up. We live a Klick up a track so no grit and the thawing and freezing has caused the track to become an ice track, crampons are required to walk on it. I managed to get the car out on Thursday but bringing it back an hour later was scary as it slid towards the 1 metre ditch, including running water of unknown depth in the bottom of it. So having managed to get the car back in to the gateway I left it there. However, tomorrow, it would be useful to have the car as I need to go to the airport, that's if the planes are doing their taking off thing. Our neighbour appeared at lunchtime to feed his cattle in the barns next to the house so I ventured a request. The customary "no bother" reply and so sometime later the Renault was hitched to the huge tractor with a rather short bit of rope. |It was all a bit hairy, the track being icy on the upward route, the tractor only getting grip on the verge and cornering was slightly alarming, at one point, taking a rather sharp and ice ring like bend tractor headed for ditch, car went straight on and JC and I both looked somewhat alarmed I suspect. However, finally the car was left on a nice snowy grass triangle next to the lightly gritted lane and hopefully I should be able to safely drive it tomorrow.

It would have been good to go birding on the coast with all this chill. The Shunan is almost solid and Loch of Bosquoy has but one pool. An interesting pool though with three Slavonian Grebes on it espyed distantly from the house.

At dawn on Xmas Eve Peregrine was added to the in the garden list as two screamed through airspace arguing noisily. Nearby there were 9 Skylarks, 2 Stonechats, 4 Reed Buntings and the usual mob of Starlings and House Sparrows. At least one Dunnock, one Robin and one Song Thrush continue to be present along with ten or twelve Blackbirds. Today a male Hen Harrier drifted over the Shunan. 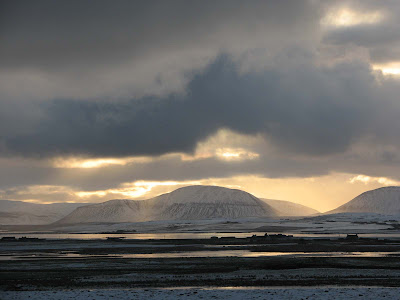 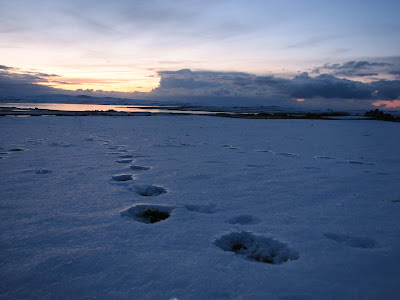 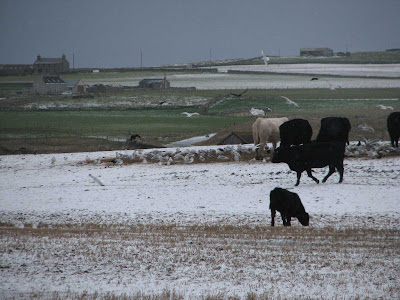 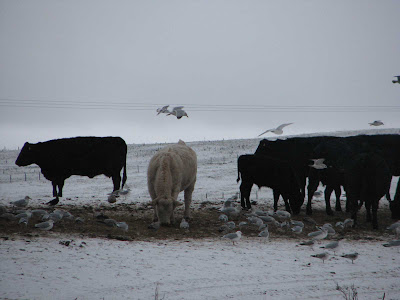 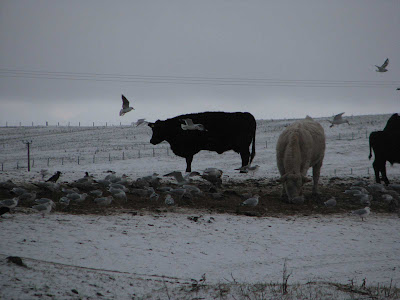 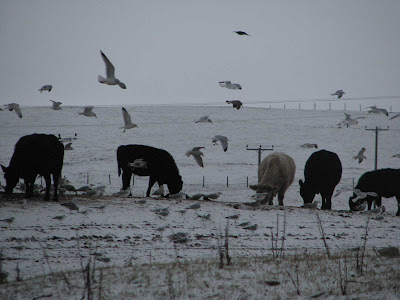 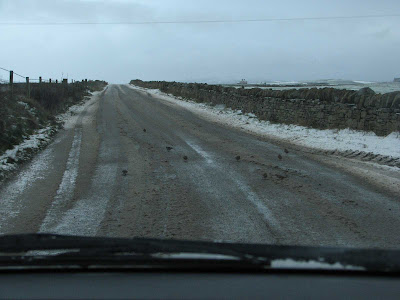 Thanks to those who have given advice. In the end I've ordered an MV fitted Robinson from ALS who were very helpful and even gave me a small discount on carriage which was very nice of them.

Currently half watching Koyaanisqatsi as I type and sort out bird records. Philip Glass's music is wonderful but the images are superlative.

Thought I'd fixed the lighting problems, at least I found which fuse it was but unfortunately it's decided to be bad tempered and keeps blowing, electrician time I reckon.
Posted by Alastair at 8:34 pm No comments:

Car Ness and Tankerness plus the airport road to St Andrew's School was my patch and a very entertaining day it was too. Highlights included Alan's Goldfinches 9+1 were an Orkney tick as they flew off the roost; a Canada Goose,a big one, (again an Orkney tick for me and the only time ever that I have described a Canada Goose as a highlight - a small one next time please) on Car Ness at Castlegreen. A Red-necked Grebe off Weethick Point consorting with one of only two Slavs (also 3 GNDs, a R-tD and a possible B-tD there with huge numbers of waders on the fields and 4 Shelduck). A cracking male Merlin sat on a post in front of the car at Crofty, Tankerness. Over 600 Pinkies proved very hard to count on Tankerness as they kept getting up and mixing up and two Hen Harriers and two Sparrowhawks were very welcome. Oh, and it was sunny and calm and altogether a very pleasant day, hope it clears again for the meteors tonight.

Then on to Kirkwall for Xmas shopping delight, picking up bird food and supermarket. Got home, tried to replace bulbs with energy savers and managed to fuse all the lights at one end of the house and I can't seem to find where the fuse is to mend them, ooops.

Sorry still no photos, just not taking any at the moment for some reason.
Posted by Alastair at 9:34 pm No comments:

It's counting day again tomorrow so I shall be venturing east as that is where I'm lined up to count.

Today I didn't go birding but there were still up to 6 Blackbirds around the garden plus a Dunnock and a Robin. The latest addition to the in the garden list is Raven which made airspace hotly pursued by two Rooks. Unfortunately Great Black-backed Gull missed airspace by about 50 metres, similar to last weekend's Peregrine. There were most likely more than the 95 Curlew in the field two below the house, the majority concentrated near the wall so some were hidden, couple of Oystercatchers there as well. These counted just prior to lunch in the garden, it wasn't exactly balmy but sunny, still and very pleasant indeed.

The triumph of the day was finally mending Grannie's sofa, I've put the legs back on which I sawed off in a unsuccessful attempt to get it through the doorway into what was the old buttery. Grannie's sofa now lives quite contentedly in the kitchen where we've all got used to it living, indeed today's Raven was spotted from its worn but comfortable embrace.
Posted by Alastair at 9:52 pm No comments:

Three Winter Moths by one particular window. We have a tungsten bulb at this window and they come to that but I've not found them on the windows where a fluorescent tube is burning. High on my Christmas list is a decent moth trap. I'm going for actinic, rather than MV. Anyone have any views on the difference in catch between the two types of light?
Posted by Alastair at 11:15 pm 4 comments:

The wine company I use emailed me. Apparently a pallet was dropped somewhere in transit and my six bottles no longer contain the hoped for accompaniment to Stilton and oatcakes. They have of course resent the order which will arrive a little late but I was in no hurry. Green glass shards, dented torn cardboard stained wine red, a small pool on a concrete loading bay; not what the winemakers intended for their labours.
Posted by Alastair at 12:11 am No comments: 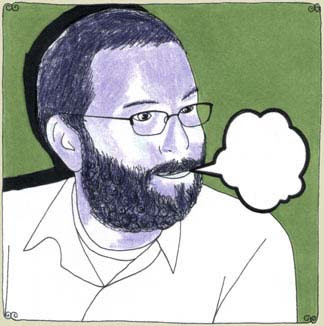 Don't miss his very cool website at: http://cftpa.org/ (click the cat).
Posted by Alastair at 8:56 pm No comments:

Thanks for the cartoons Nick - a riposte

See the side panel for my festive, seasonal tunes
Posted by Alastair at 8:10 pm No comments:

Here's a blast from the past (with a mega sound track) - sorry about the ads, couldn't get rid of them.

http://www.youtube.com/watch?v=5RPBXJ6u2RM
Posted by Alastair at 11:09 pm No comments:

Nipping home at lunchtime found at least 7 Blackbirds and a Song Thrush in the garden. Strongly suspected the Dunnock to be present again (no bins) but a smart male Greenfinch under the feeders was unmissable. "From the garden" list currently stands at 48 and "in the garden" at 27. Smart birds in the garden include Hen Harrier (twice on consecutive days, a male then a ringtail) and Brambling. From the garden includes Long-tailed Duck and Slavonian Grebe (admittedly on distant Loch Harray but identifiable none the less).
Posted by Alastair at 9:31 pm No comments: