The Rooks were decidedly amorous as they cawed around the rookery this morn. Hares boxed across the fields, Fulmars sat on their ledges and islands (the inland ones here often nest on the low islands of fresh water lochs).

On distant Loch of Harray a pair of Red-throated Divers were loafing and when I went down there to check the ID both Shelduck and Oystercatcher were present. The divers made the "from the garden" list as did the Fulmars joining the somewhat closer Little Grebe on Loch of Bosquoy. 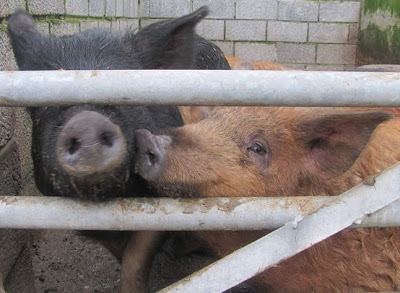 Taking the girls over to the farm near Rendall for horsey stuff I found the Barnacle Geese were still present and there was a Pinkie with them. There were two Wrens around the farm, the first of the year, they seem to have disappeared completely from central and north West Mainland. Also there a Redwing. Nearby on Loch of Brockan there were 24 Pintail.

A late afternoon walk at Northside found the sea with a good swell. 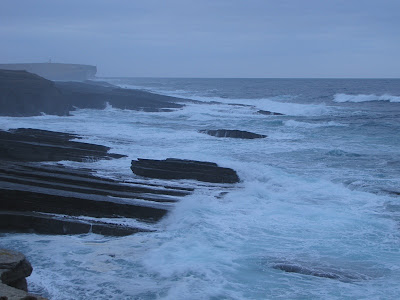 Posted by Alastair at 9:02 pm No comments:

Birding accidents and other business

Steve, over at North Downs and Beyond, Yet Again mentioned a car crash that he was in many years ago whilst en route to Dungeness one evening. Reminiscing I recalled: "Steve,
I was in that car too, driven by a now very well known moth-er I recall, his dad's car. We slammed into the back of a parked vehicle outside a chippy and the owner came out and asked if we always stopped like that or did we sometimes use brakes. We were rescued by a birder whose subsequent stunts included out-running the feds on the Rye - Dungeness road and producing a Kiwi Fruit on demand on Bardsey, (impossible things to request whilst staying on a small offshore island which has no shop). Anyway, back to the tale, he simply bent the broken bits of car back into shape by hand after we'd escaped the rather bad tempered folkies.

I once had a Storm Petrel puke into my open mouth when I was taking it out of the top shelf of a mist net, nice ...."

New video in the side panel from For The Sea - help the planet and sea creatures in particular, take your own bags when you go shopping.
Posted by Alastair at 10:20 pm No comments: 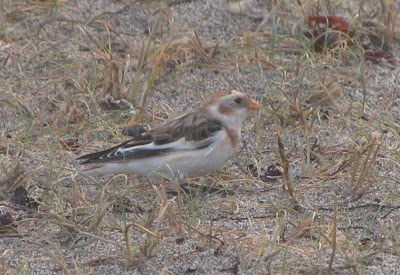 A buzz around West Mainland today produced two Snow Buntings on Birsay Links and... not much else. There were plenty of large gulls at Lock of Skaill but I couldn't find anything of real interest, indeed resorted to looking carefully at Common Gulls to try and find an eastern race bird, one suspect but unsuccessful. 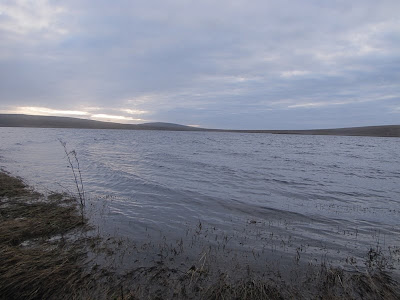 Loch of Swanney
Posted by Alastair at 6:04 pm No comments: 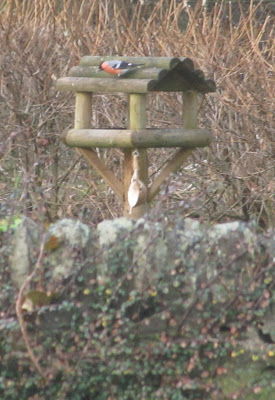 Northern Bullfinch
Three Bullfinch were present in Finstown early this p.m. The male was really bright as can be seen above. One female was observed through the scope and showed the characteristic pinky grey body plumage and the very fine pale border between the black of the head and the neck. No calls were heard. Also present were four Goldfinch.

The Bearded Seal was on the slip. There were 350 Twite and about 100 Linnet at the school bird crop. 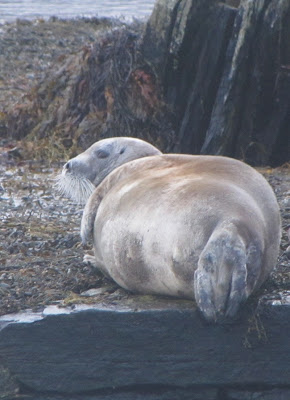 Back at home there were three Chaffinch and the 1st winter Peregrine sat on a fence post viewed from the garden. A Sparrowhawk raided the garden.
Posted by Alastair at 9:15 pm No comments:

Casiotone for the Painfully Alone - RIP

Have just learnt that Owen Ashworth has ended the musical experience of CftPA. 13 years and 110 recorded songs - thanks Owen, looking forward to what comes next ...

Posted by Alastair at 8:44 pm No comments: 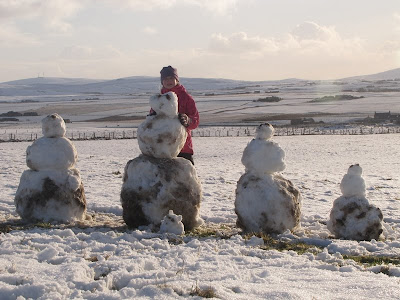 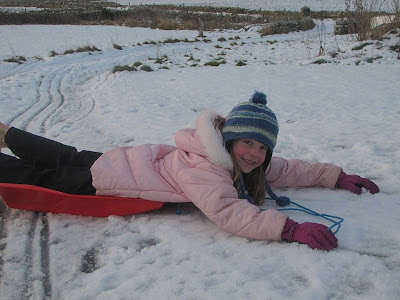 Late morning and early afternoon was spent playing in the snow with the offspring. We trudged up the hill at the back to wizz down repeatedly, forwards, backwards, kneeling, on belly etc. Mollie preferred to make a snow person family though, plus snow cat.

Forgoing lunch I headed straight off to Birsay where there wasn't a great deal at first. No snow either. Apparently a Glaucous Gull and 45 Snow Buntings had been present earlier. 170 Purple Sands was a good total and when I got to Palace Stores the female Hen Harrier was hunting behind the toilet block - expect the pix will be rubbish though. 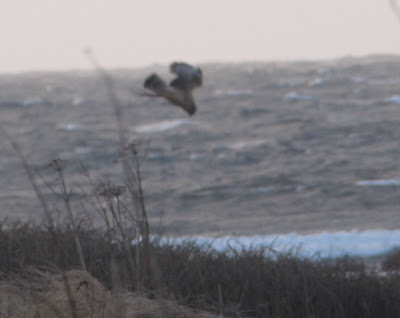 As predicted
However, after a few steps across The Links a familiar trill was heard with a bunting sized beast flipping up and dropping down. Excellent views were obtained (pix may be rubbish though as the light was poor). Currently Lapland is highly sought after by PH who is chasing the county year list record, unfortunately I couldn't call for half an hour as there is no signal at Birsay. Hopefully he'll get it tomorrow. 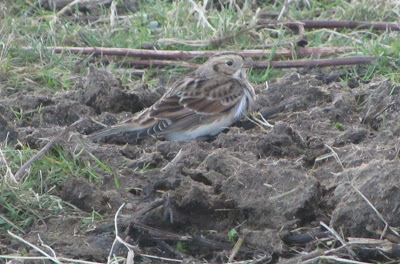 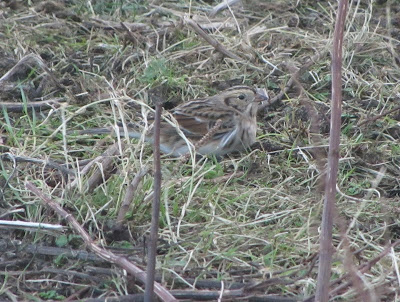 Posted by Alastair at 6:44 pm No comments:

More of the white stuff 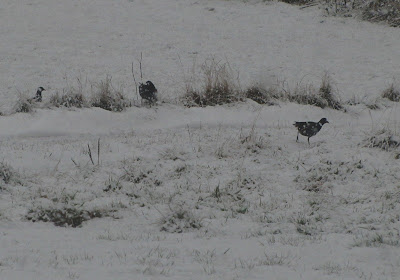 Moorhens arrived back in the garden this morning as the rain turned to snow and kept going until 4 or so. By that time there was a fair depth and the birds were scoffing everything we put out there.

The only other notable today was a male Chaffinch under the feeders. 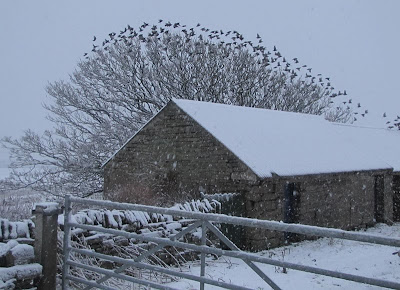 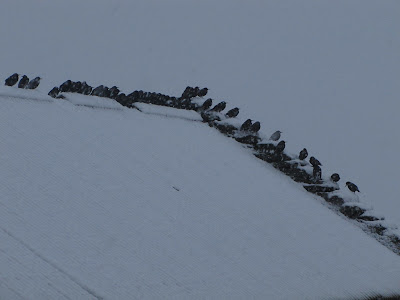 Starlings coming to roost in the snow
Posted by Alastair at 7:37 pm No comments: 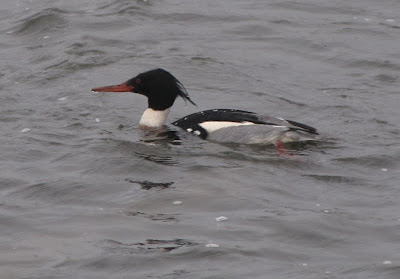 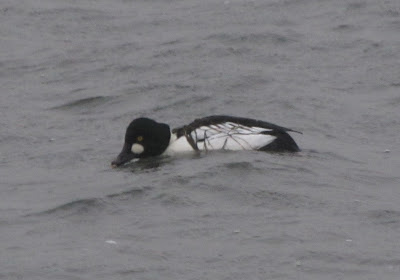 Yesterday I headed east for the middle of the day in search of an American. Three possibilities were attempted.

No1 - Lesser Scaup, but most of the diving duck had departed from Ayre's Loch, no sign.
No2 - Green-winged Teal, but a thorough search of Graemashall Loch produced only a few crecca.
No3 - Redbanks on the Yinstay Rd, bingo! Excellent drake Surf Scoter. Also there a good number of Velvet Scoter and 8 Great Northerns and a most impressive flock of 200 Barwits. 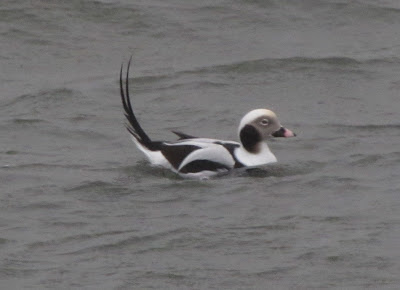 Long-tailed Duck - another of the commoner species of quacker seen yesterday
Today was a gardening day. Chaffinch flew into the large Sycamore. Then just before lunch five Goldfinch flew across the garden and landed next door. 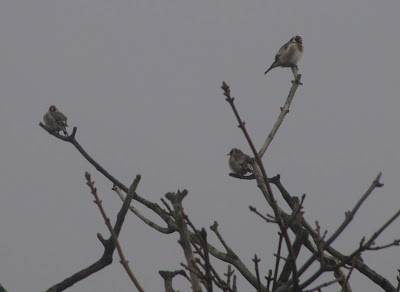 Three of the five Goldfinch

One drake Goosander was still present on Loch of Bosquoy. 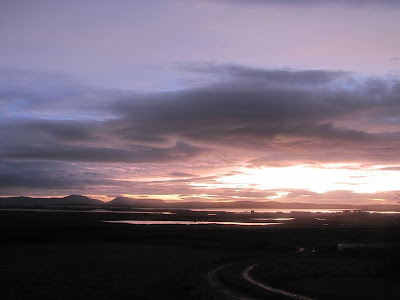 Posted by Alastair at 5:31 pm No comments: 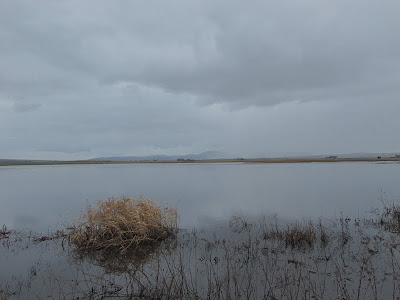 Late afternoon at the Loch of Bosquoy and it was unusually quiet. The three drake Goosander were still there but that was all of note. 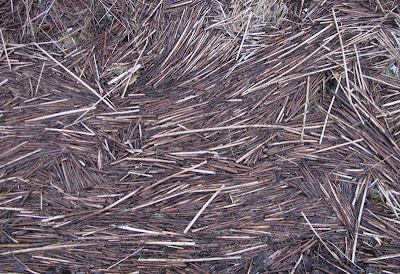 The receeding water has left the stems from the fish traps on the shore.
Posted by Alastair at 4:36 pm No comments:

New Year in the square

I don't tend to go birding very much on New Year's Day and so a brief struggle out into the garden and down to The Shunan is all that I managed. Despite this lack of effort a new "from the garden" bird (actually from the garage where I was sheltering from the snow) was espied, Goosander. Three drakes were sailing across Loch of Bosquoy, not a common species on Orkney so a bonus for little effort. I'm putting the "seen in the home tetrad" species in the side panel this year.

Last Year's "from the garden" competition spurred me to keep a "from the garden" list, I prefer a tetrad and "in the garden" list usually. The total for the year was 95 which wasn't bad. Slightly frustrating were the few species that were on The Shunan but feeding in those tricky to see from the garden corners, this included quality like Pectoral Sandpiper and Little Stint as well as Whimbrel, a species that was surprisingly scarce. In the spring I had too distant to identify possible Pec Sand as well, a Green Sand also fell into that category and the autumn one was a brief flyby from The Shunan. Other frustrating misses were the Pomarine Skua that Louise had fly through the garden when I was at the bottom of the track in the car and the Little Egret that another birder saw fly across the Dounby road whilst we were in the house. There were also the species that were seen by others that should in theory have been visible from the house, both Gyr Falcon and Golden Eagle fall into this category being seen from The Ring of Brogdar. Common Crane must have flown past the house. In theory both Eider and Gannet should have been visible from the garden but heat haze prevented Gannet being seen and I couldn't figure out exactly where to look for the fresh water breeding Eiders on Loch of Harray. In addition Scaup on Loch of Harray defeated me by distance, I knew which flock of Tufted a drake was in I just couldn't do it at the distance. Kittiwake were seen on one occasion from the banks of Loch of Harray as well, despite lots of staring they were not recorded from the garden. So 95 out of a known possible 106. Going off island during October was a bad move and almost certainly meant I missed Goldcrest, Chiffchaff and possibly more exotic passerines.

In the garden last year included Waxwing, Greenshank, Arctic Skua, Great Skua, (and Pom if I count Louise's birds too), Red-throated Diver, Common Redpoll, Hen Harrier, Moorhen; all slightly odd garden birds (most of these were admittedly fly-overs, but all the same).

Goldfinch feeding in the garden at the end of last year
Posted by Alastair at 3:20 pm 2 comments: