I've been writing up the Lapland Bunting eruption of last year for the bird report. An interesting, if challenging task. Once the report is published I'll probably put a link to the article on here somewhere. Many thanks to NC and to DB for their proof reading and weather interpretation skills. 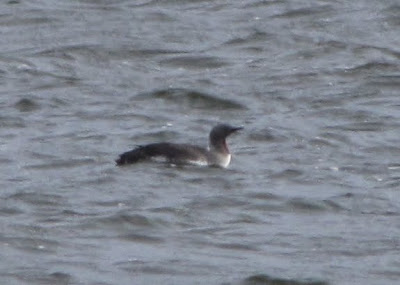 Record shot of (not so) distant Red-throated Diver

I had a jaunt around the southern end of Loch of Harray yesterday morning. The Barnhouse hide revealed a superb summer plumage Red-throated Diver, closeish inshore. A further three were revealed as I headed northwards. Star birds though were the huge flock of 204 Scaup.

Scaup, Loch of Harray
Posted by Alastair at 8:55 pm No comments: 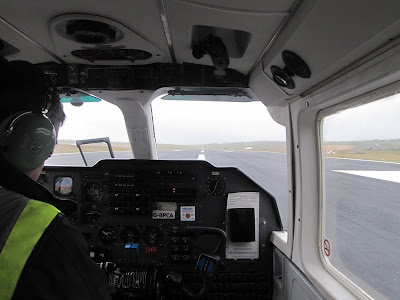 Oo, er, I'm not keen on this bit
Louise's sister who is visiting us kindly volunteered to look after the offspring for a day and a night so we hopped on the plane and spent a day and a bit on North Ron.

We were very well looked after at the observatory, highly recommended and had a great day tromping up to the north end, carefully avoiding Tor Ness where the White-billed Diver was found the next morning. 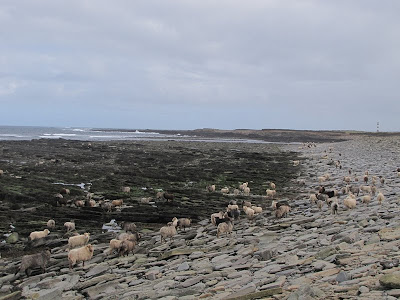 The famous beach grazing sheep
The contrast was really interesting with Meadow Pipit and Pied Wagtail thinly but widely scattered, until today they've been very difficult to find on Mainland. Skylarks were singing everywhere, bit thin on the ground on West Mainland. We managed to see Jack Snipe, flushed from the road side and a short seawatch from Denis Head produced a bit of Kittiwake movement. 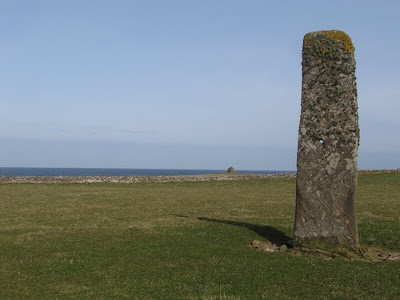 The most striking thing for me about the island were the Fulmars. They nest on the ground by the dykes (walls), so were busy establishing territory and spend their time making low level passes across the fields. Pretty much everywhere you go there's Fulmars passing you by at head level. 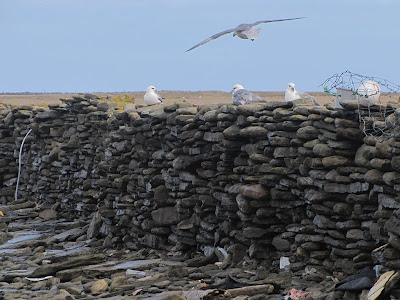 Fulmars laying claim to a dyke 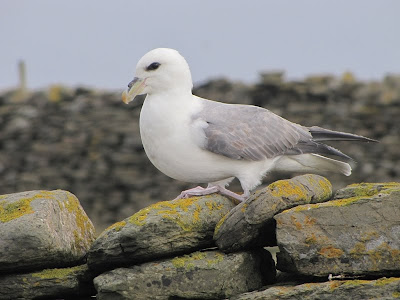 Back at the ranch there was Goldfinch on the Nyger feeder yesterday and still three male Chaffinch which have begun to sing. Meadow Pipit was heard by The Shunan. The Song Thrush still sings in the evening and a few Jackdaw are coming in to the roost (I need to get a look at these birds on the deck as I suspect monedula). There were Golden Plover at Loch of Bosquoy this morning and I also espied a long distance Pied Wagtail. 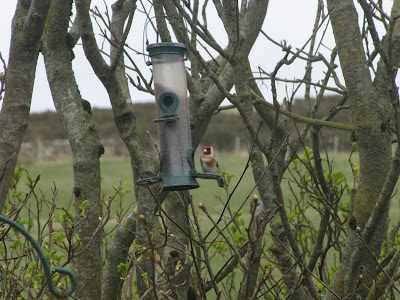 Goldfinch on Nyger feeder
Posted by Alastair at 8:58 pm No comments:

Lots of jobs to do in the garden so I didn't go anywhere much this weekend and it was quiet in Harray (apart from the Song Thrush and the Rooks. see video at the bottom of this post. 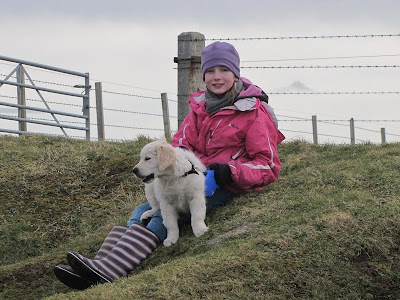 By special request, a picture of the pup

The cold weather has put the Oystercatchers back in loafing mood, they are no longer piping suicidally inches from the road but are back on The Shunan sitting around. The putative Yellow-legged Gull of earlier in the week did not reappear. The huge Pink-feet flock behind the house has dwindled from about 1000 to just 20 or so. 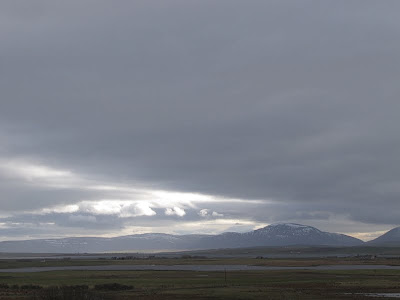 I've been trying to write up the Lapland Bunting influx of the autumn. It seems that this sort of influx has not occurred for quite a while and I've been reading references from the 60s.

I've changed the music in the side panel (just scroll to the bottom), nothing too radical (excepting These New Puritans perhaps) but some interesting historical stuff - especially enjoyed seeing Jeff "The Skunk" Baxter and Denny Diaz duelling from the 70s (and how the camera guys just couldn't keep up).
Posted by Alastair at 9:49 pm No comments:

Yuk. Wind, rain, sleet, snow, more wind, more sleet, more yuk. So I stayed indoors nearly all day, except when I took the puppy out. And with all that I still managed to add a species to the year's "from the garden" list as two Brambling mooched around the feeders with the Chaffinches (all five of them).

Cooked cheese scones, fish cakes and celery soup; listened to The Floyd, Beta Band and Casiotone for the Painfully Alone (of course).
Posted by Alastair at 8:16 pm 1 comment: 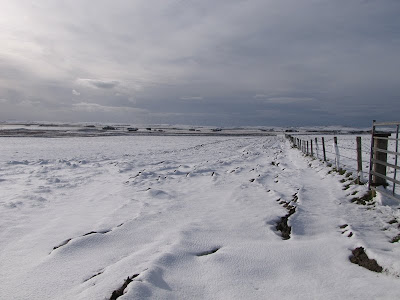 Birding from the garden was the order of the day. Trying to add to the year's "from the garden" list. Scaup was new for the year and a species I've struggled to ID from home previously. There was no wind and uncommonly, no haze. So Scaup was not so hard to pick out on distant Loch of Harray. Slavonian Grebe did not fall quite so easily but a quick trip down to the lochside proved a suitably cunning plan to locate a small flotilla. Thursday had produced the first Skylark and other recent additions have been Lesser Black-backed Gull and Pink-footed Goose. Louise claimed a Siskin on Thursday too. Woodpigeons have recently returned and these were easily seen from the garden today.

On Loch of Bosquoy a Goosander was back, probably one of the two drakes that have been lurking and I've been suppressing on Loch of Harray, hoping to add to our bird race total but on the day we failed to find them, karma.

At the end of the day a small raptor on a post down near Loch of Harray was quite likely a Merlin but it was more patient and despite watching for 30 minutes or so it managed to fly and disappear whilst I moved the scope into the kitchen. However, Short-eared Owl was espied by Loch of Bosquoy on another post. The list stands at 53. 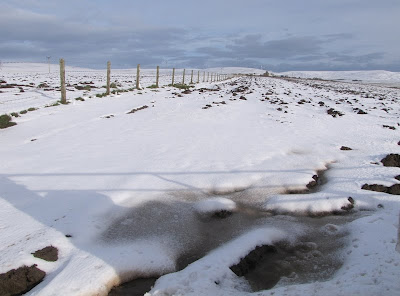 Interesting bits and bods from the day -the obvious increase in Tufted Duck on Loch of Harray, there were several hundred and probably 50 Goldeneye. Two flocks of Skylarks appeared briefly in the neighbouring field, a 16 and an 18. Chaffinch numbers reached 5, which might be a record. The Oystercatchers returned to flocking on The Shunan. Disconsolate with the snow and freezing temperature they had given up on amorous activities and 201 sat sulking on the island and around the shore.
Posted by Alastair at 10:58 pm No comments:

A pretty good day out mostly in the West Mainland but with the last part of the day spent East. Best birds were Common Redpoll at Dale, Swanney and Bullfinch at Finstown. We managed one Wren, one Redwing and no Snipe. Best laid plans that went awry, Goosander (seen well yesterday), Snow Buntings and Stonechat (also seen yesterday). 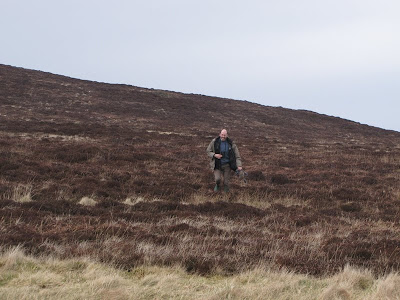 The team total was 91 with the total species seen by all teams being 98. Also available were Siskin (at Queenamida, a mile up a rough track), the afore mentioned Goosander, Surf Scoter (most likely) and probably Black-throated Diver, Red-necked Grebe and Little Auk but it was a tad rough on the sea.
Posted by Alastair at 8:43 pm 2 comments:

The aurora is showing this evening. Unfortunately there is cloud approaching from the north which is limiting it.

Plenty of Pink-feet going over at about 9 p.m.
Posted by Alastair at 10:30 pm No comments: