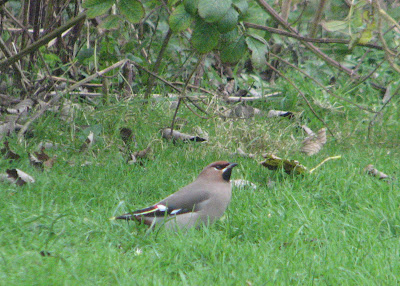 Louise photographed the above through the kitchen window feeding on the apples we put out. It was present for a few hours.
Posted by Alastair at 10:55 pm No comments: 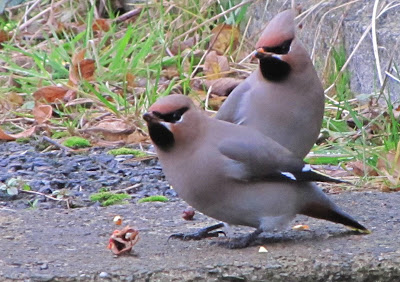 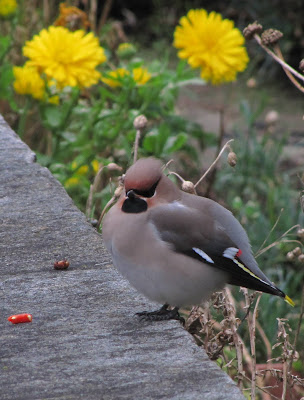 I managed to nip into Stromness for a few minutes late this afternoon. The light for pictures was not great but I took a few snaps. I couldn't find the reported 300 but I did see 60 or so.
Posted by Alastair at 8:16 pm 4 comments:

Louise saw three on the wall outside the kitchen window but being in the midst of a hamster RIP crisis I missed them, (she thought there were probably more in the tree too). A redpoll sp flew around the garden on a couple of occasions but was not IDed. A Chaffinch went over, 7 Goldies flew past and a Pinkie was amongst the Greylags in the field above The Shunan. There were 7 Twite at the bottom of the track. The sea was ... a bit rough and birdless.

Pictures will be posted soon but I'm sorting out holiday snaps and reorganising my system as have replaced the faithful, but of late rather temperamental, S3 with an SX20.
Posted by Alastair at 11:00 pm No comments:

Spent the middle of the day toodling around Deerness and South Ron with JB. 9 Black-throats in Bay of Sandoyne were neat. South Ron was free of migrants however.

At home late in the afternoon Twite got onto the garden list and then a Waxwing flew through the garden calling with two Starlings.

Back to Wednesday which was a pretty good West mainland do, 5 Lapland Buntings and a very busy Loch of Skaill, including the Whooper family below (31 altogether mostly in family groups).
Posted by Alastair at 10:05 pm No comments: 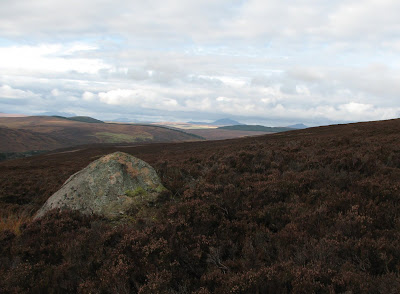 Well, I had to leave Orkney on the morning of the fall didn't I? On Saturday, 9th the garden was full of Redwing, about 300 and Brambling were calling as I packed the car. Redwing were everywhere as we drove to Stromness but little was seen from the Hamnavoe on the crossing, just one flock of about 250 scooting low over the waves. At Dunnet head one small flock came in/off and there were half a dozen grounded birds but otherwise not much evidence of what was going on across the water.

Fortunately all was not lost as the cottage was on bit of a fly-way and there were good movements of Redwings early in the week and Pinkies pretty much throughout the week. 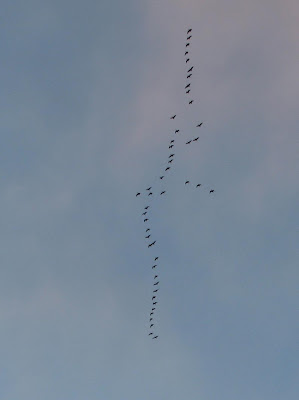 On return a day out produced Surf Scoter and three Poms from Inganess and Point of Ayre.
Posted by Alastair at 8:51 pm No comments:

Not much birding too much work! But there are still Brambling about, 7 or so this morning in the garden.
Posted by Alastair at 8:45 pm No comments: 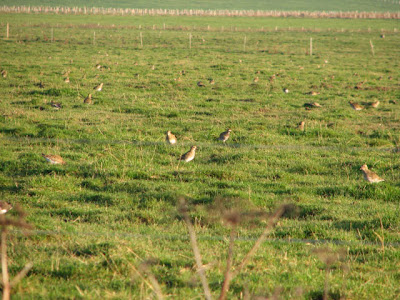 I should post a pic of Y-bW here of course but ... here's a small bit of the massive Goldie flock, at least 3,500. After a considerable amount of scrutiny I managed to find a juvenile Pec Sand feeding in the mud around a cattle feeder. Nothing else gave itself up though, I reckon this flock will repay further scrutiny. Just down the road in a nearby sheep field there were 4 Ruff.

At Birsay there were 9 Laps on the Links and a Spotted Flycatcher and 12 Siskin at Palace. Piles of waders on the beach as well but I could only find Dunlin, Ringed Plover, Turnstone etc.

At home a Brambling appeared at midday and by dusk there were 18. A couple of Redwing at dusk too. Four or five Blackbirds left high to the south in the evening and a Robin was ticking in the back willows.
Posted by Alastair at 8:38 pm No comments: 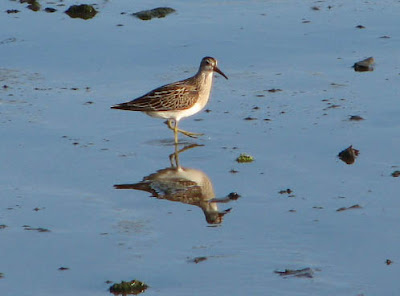 Not a Y-bW (working in Kirkwall earlier this week)

I've been birding east and south a bit recently and this morning decided that a trip to South Ron at dawn would be the business, basically slightly miffed that I'm the only Orkney birder not to see any sort of half decent passerine this autumn (Laps excepted). Duly arrived at the Hope and searched hopelessly for PH's buntings of yesterday afternoon, so headed back to the South Cara bushes. Here Goldcrest's made reassuring noises and three duly appeared and then a small warbler flew away from me towards the cottage, fortunately it called as it left, YbW. Hopeless views were obtained before it disappeared into the cottage garden. Then a wagtail flew over, but the call was not right so I looked at it and it was a bunting. It didn't stop and I can't put a name to it other than brown bunting, ******!!!!!!!

Chiffchaff showed, another YbW called in the lower bushes. PH appeared and at that point two YbWs performed beautifully right in front of us for some minutes. There was also a smart male Brambling, some Siskin and a few Song Thrushes. Got back for a late breakfast and our guests.

Family trip to Birsay produced a smart sum plum Great Northern flying east and two Manx. On the Links there were 4 Laps and then 14 flew over Palace where a Siskin dropped in and there was a Robin in the garden.
Posted by Alastair at 11:30 pm No comments: