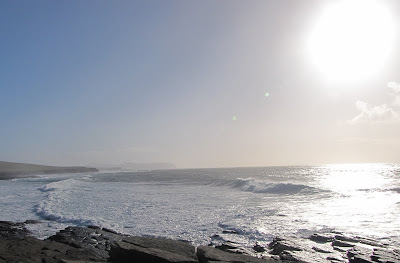 The bird race is next weekend so as a member of the reigning champion team some serious preparation was required. I've also got a long list of jobs to do at home so it was all a bit of a balancing act. However, vital species like Snow Bunting, Shoveler, Pintail, Barnacle Goose and Red-throated Diver have now been nailed down; here's hoping they don't bog off before next Sunday.

Bird of the day was a tie between a smart Blue Fulmar moving west off the Brough car park this morn in a fairly heavy Fulmar passage and the Short-eared Owl which performed for 5 minutes or so in fields below the garden late this afternoon. 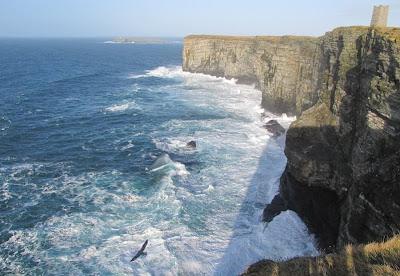 In the afternoon, whilst the new puppy was kipping, we had a family trip to Marwick, huge waves, thousands of Guillemots and aerobatic Fulmars were enjoyed by all. 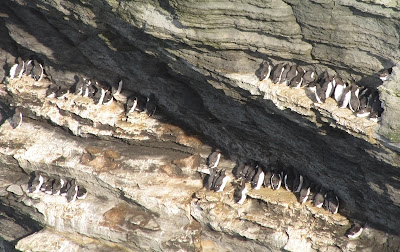 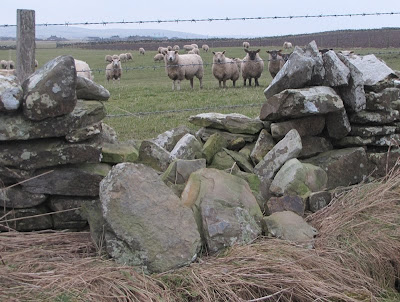 Happy sheep with their Sony Walkman MP3 players
So no Mumford tickets for me, getting up at 6 was not early enough by a long chalk. For the next big gig here I'll be getting the sleeping bag out. By the time I was there at 7 there were 500 people in the queue for 350 tickets (limited to 2 each) there were to be a lot of very disappointed folk in that queue. Still, I've got my Graham Fellows (John Shuttleworth) tickets.

The other big effort this weekend was to fight with iTunes and my iPod. My iPod is a pretty thing, pretty ~~~~~~~ useless IMHO. Anyway having returned it to default and reinstalled the software yet again de-derr the podcast function appeared and (wonder of wonders) appears to work. Managed to get some album art to download as well - using the free 100 of two bits of downloaded software, but in the end might have to buy one of these fixing products as they help eliminate duplicates and sort out most of the other iTunes bugs and glitches. Why couldn't Apple with all its zillions sort this out rather than leave it to these independant software writers? WMP is not perfect, and I'm no fan of MS but its a way better bit of software. All the glitches are of course related to Apples attempt to make me buy music via the ghastly iTunes store. What is required is some open source alternative to iTunes that will still make the iPod work... Apple won't like this idea of course. Rant, rant but for such expensive kit it is very disappointing. Now don't get me started on their recent laptops ...

On the positive side great reggae programme on BBC4 on Friday night.

Common Gulls, mostly, and some of 222 Oystercatchers at Loch of Bosquoy today
Birding, oh yes I did do some of that. Some good flocks of Oystercatchers around and about inland. A secret site (bird race coming up) produced both Red-throated Diver and Goosander. The Shunan had 55 Shelduck and good numbers of Curlew and Redshank as well as a marauding Peregrine. Black-headed Gulls are now a common site across the fields. The female Chaffinch continues to frequent the garden.
Posted by Alastair at 10:45 pm 1 comment:

When we got back on Sunday evening Oystercatcher was heard in the night. Today there were 70 on The Shunan, the first ones I've seen here since last autumn. Spring is sprunging.
Posted by Alastair at 11:00 pm 1 comment: 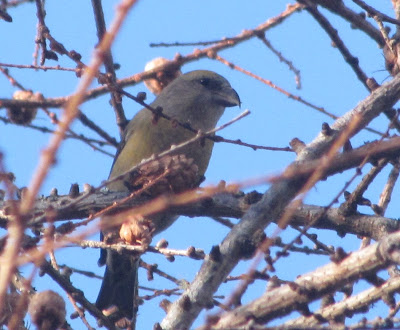 We went to Cairngorm last weekend, I had Friday off so after the obligatory shopping in Inverness we headed south and into the hills. Saturday dawned bright and still, ideal. Took a walk around the Loch Morlich area and soon bumped into a decent flock of Lindsay's faves. The birds were singing, to my ear the song was very different from the North Yorkshire birds I'm familiar with. Very hard to see detail in the field and I snapped away happily. To my eye these birds look like curvirostra but... 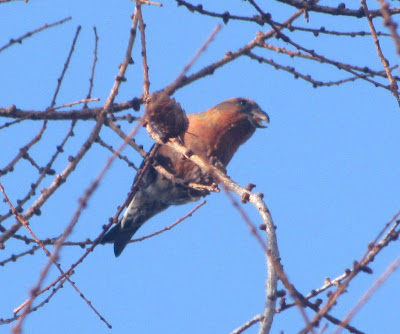 Dunnock in the wind

A real howler is battering us tonight. During the day it relaxed considerably but first thing it blew with nasty, biting snow. Sheltering in the doorway to greet the customers I was rather surprised to find a Dunnock flitting around, pretty sure this is only my second record of this species at work.

The spring theme was continued earlier in the week, a Black-headed Gull was amongst the Commons on the playing fields. It doesn't feel like spring right now.
Posted by Alastair at 11:36 pm No comments: