Yesterday I went out to Auskerry which is a small island just to the south of Stronsay. It took an hour and a half to get there from Kirkwall in a fairly speedy boat. Two Arctic Terns harassed me at one point, not so long ago there were 8,000 nesting here. Despite the lack of terns it was an interesting day with a range of species some of which were still breeding or had been successful. Arctic Skuas, various cliff nesting seabirds (see below) and the usual wader suspects. Two Harbour Porpoise an adult and a calf were also espied. The island is inhabited, by one family. A different kind of life. 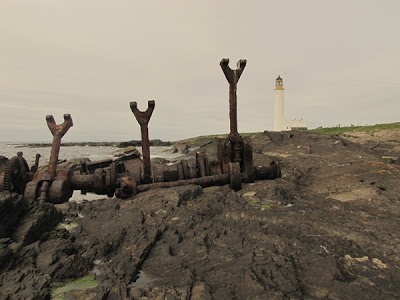 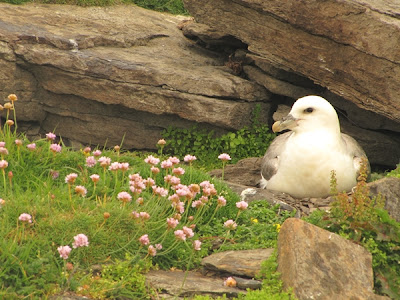 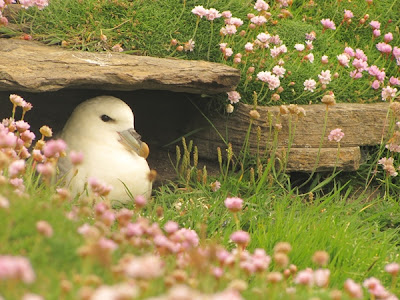 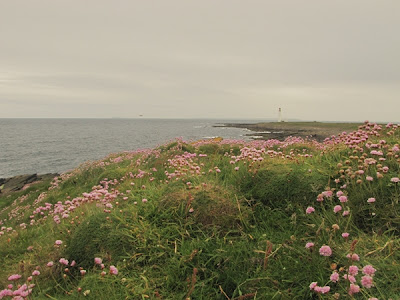 View to the light 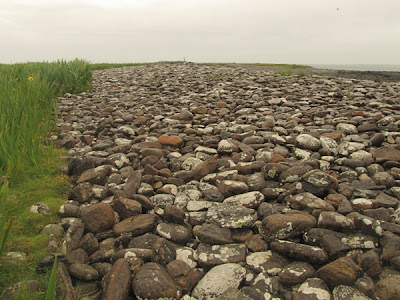 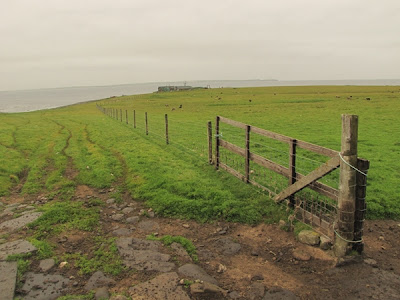 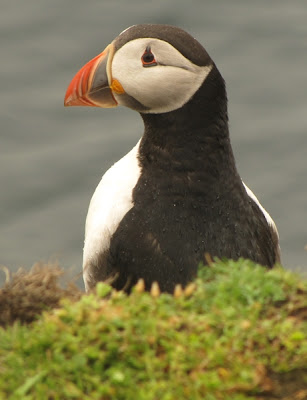 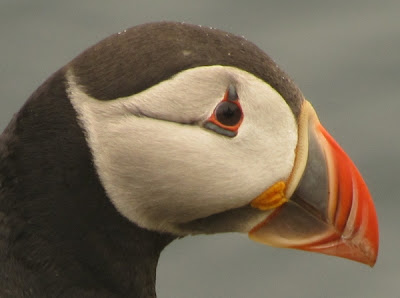 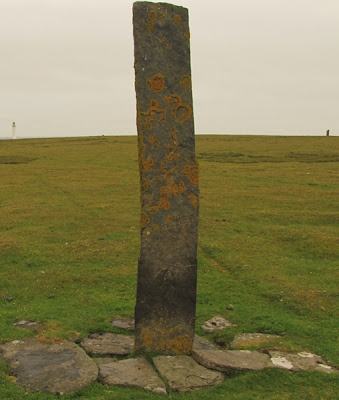 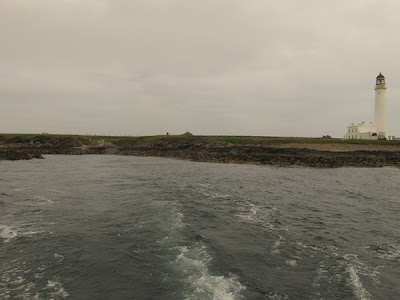 On the way back the mobile buzzed a bit and a message came through (thanks SS) that there was a stint sp on The Shunan. I'd checked it before I left but easterly winds were conducive to something happening, despite the date. However, thorough searching for over an hour did not reveal the stint so I went to cook tea only to be soon interupted by AL to say he'd got a Temminck's. Tea abandonned (loss of house points there). Shot down the hill nearly losing it on the bend and connected. Good job too as it has proved highly elusive subsequently being seen briefly just twice despite my own and others prolonged efforts. Have not (so far) managed to get it on the "from the garden" list.
A walk today with Cora the dog tugging produced no stint but I did refind the two Ring-necked Ducks on Bosquoy and various other bits and bats showed well there, including a nice male Hen Harrier. More broods of Tufted make at least six so far. 8 Siskin were in the peedie wood.
The Shunan this evening held at least 24 Black-tailed Godwits and 17 Dunlin. The Tree Sparrow has visited a couple of times today. 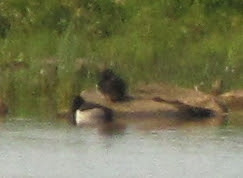 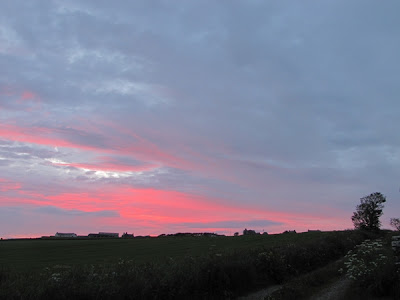 Evening sky - Mirbister
Posted by Alastair at 11:37 pm No comments:

Not much birding done this weekend as we've been enjoying the St Magnus Festival - The Tempest on Friday night, Cinderella and Mozart's Requiem today.

I did run the moth trap last night, although it barely goes dark. There were plenty of carpets about but only one decided to go in the trap. This one below was seen earlier. 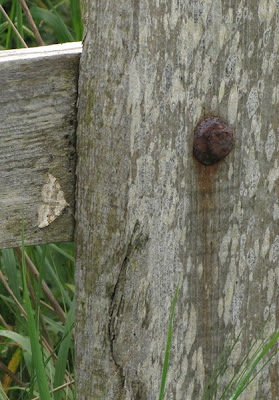 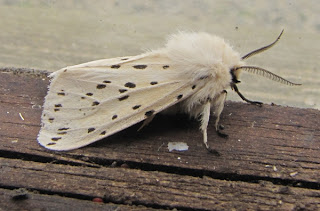 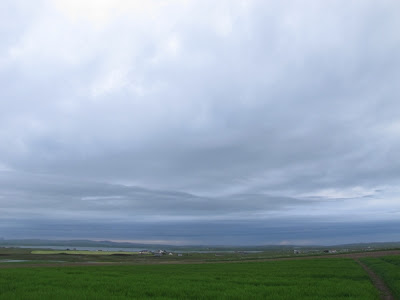 Here's a Harray sky, not yesterday as it was a beautiful sunny, even hot day.
Posted by Alastair at 10:34 pm No comments:

Managed to see one of the Ring-necked Ducks from the garden this evening and that has reassured me that I hadn't previously overlooked them. Pretty distinctive even from this range. Still slightly miffed I didn't find them but so it goes...

Tree Sparrow in the garden morning and evening today and a flock of four Arctic Terns went over the garden, entering airspace. Later a further 8 Arctic Terns were high over neighbouring fields, these two flocks were heading north. I'm guessing it is too late for them to breed elsewhere, perhaps they're just wandering. First high flying flocks I've seen this year.
Posted by Alastair at 10:02 pm No comments:

I'd left my phone at home charging when we went down to Fungus (the pony) I'd wandered along Loch of Harray (Short-eared Owl and various bits and bats). Fortunately I checked my phone not too long after we got back: Two Ring-necked Ducks, Loch of Bosquoy, with the Tufted. I checked from the garden and couldn't see the Tufted. Under the wall.

Down at the Loch by 9.45 or so and the light was still easily good enough to pick out the two drakes. A bit disappointed I didn't find them, slightly worried I might have seen them from the garden the other day and passed them off as moulting Tufties, it is a long way away though. Excellent birds to add to this real purple patch.

American sparrow come to my feeders
Posted by Alastair at 11:40 pm 1 comment:

A trip out last night produced three Otters, a Spotted Crake, a Grasshopper Warbler and a Corn Crake.

This evening whilst on the phone to a local birder a Cuckoo flew into the tree in the front garden, a waif and stray blown in by the storm. 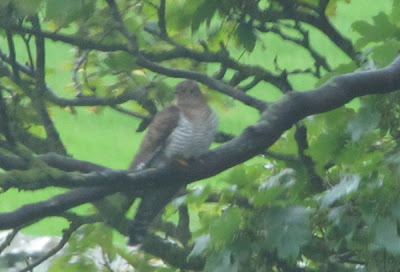 Brilliant birding (and a pitfall) 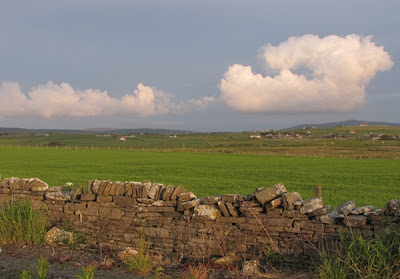 Just an excellent day yesterday, starting off at 5 doing my farm survey. It's an organic farm that borders the moor so there's lots of interest. Best bird was a redpoll sp, in the same place as last time. Lots of Twite on the moorland edge with signs of breeding.

Then at home There was plenty of interest around Loch of Bosquoy and The Shunan trying to count breeding  birds. I got home and a Marsh Harrier flew through and a Tree Sparrow came to the feeders again.

A fun afternoon was spent at Birsay, rock pooling and eating nice cake at the cafe as well as counting Arctic Terns. 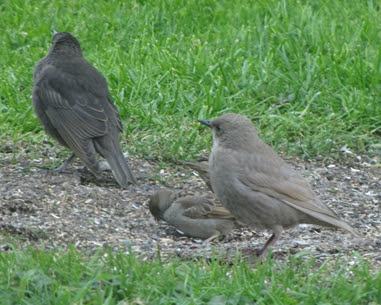 Here's a pitfall bird, under the feeders 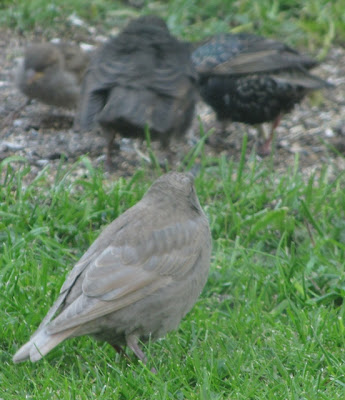 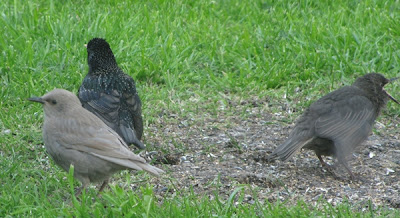 Just a Starling, leucistic juvenile
Then in the evening after eating tea and whilst finishing my beer and intermittently peering at The Shunan with my scope a very smart Red-necked Phalarope was found feeding next to the Dunlin. Ellen and I leapt in the car and got reasonable views before it rather rapidly vapourised. One minute it was in the scope, Ellen looked and saw it again, I went back to the scope and it had gone...
A self-found tick for me, so especially nice. 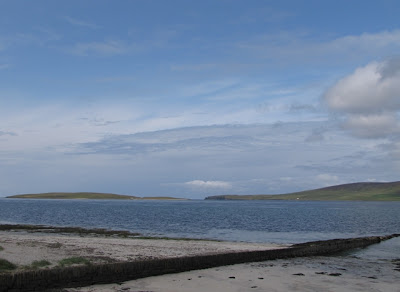 A very nice, if distant Wood Sandpiper was on The Shunan late this afternoon, very pleased with that.

I went to try and twitch the Red-necked Phalarope at the Loch of Banks this evening and dipped but AL had tried twice earlier and failed. MR had, of course, got a cracking photo
Posted by Alastair at 9:51 pm 1 comment:

Roared over to Birsay after work for the pod of Orcas, which had gone. They had long rounded the north end of Rousay; one day.

However, the next text message was more hopeful, White-billed Diver off the Broch of Gurness. I went over after tea, but a 15 minute drive. After a considerable search eventually got fine, but unrecordable views from the Broch of Gurness car park. The bird was in full summer plumage. It was actually a tick as I never counted the one I saw very badly from Filey beach and a very likely autumn seawatch candidate was just not quite tickable.

For the last few weeks we've been finding increasing numbers of broken birds' eggs on the track by The Shunan. At first I thought it was adult waders disposing of hatched eggs but as it went on I began to think that was an unlikely explanation. Today there were about five or six new eggs on the track. The culprits are nesting in the nearby hawthorn hedge. 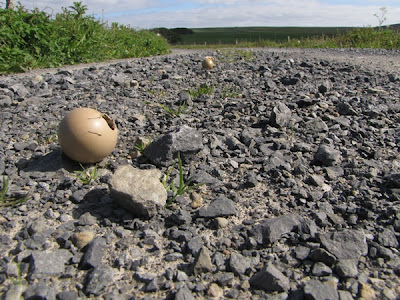 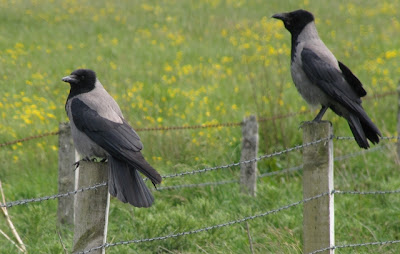 Hooded Crows
Returning from working Sooth it takes me a while to get back into understanding what has happened to various broods of duck and waders. The Shelduck pair on The Shunan are down to five from eight, I wonder if the ongoing territorial battles with a second pair; and sometimes a third pair as well, might have anything to do with these losses. The Curlew, Oysercatcher and Redshank pairs around The Shunan appear to have young. There are increasing numbers of failed Oysetercatchers and Lapwings gathering there now though.
I've rather neglected the Arctic Terns at Birsay this year so rather than racing off East in the hope of Orcas I went to Skipi Geo. A sadly quiet place greeted me, at first I thought they had all left but I eventually found two sitting birds. Hopefully the others have gone off to breed somewhere else. The small inland colony that was relatively successful last year seems to have established elsewhere, and although terns are coming in to feed I'm pretty certain they're not breeding at Bosquoy.
A Siskin flew in briefly on Friday at lunchtime, a rather uncommon visitor this year. On Saturday a Willow Warbler sang a line or two of its enigmatic song in the garden before heading off north and a few minutes later I found a Chiffchaff singing just beyond the garden. First records from the garden for the year of these two species. A warbler trio was required so having located a Sedge Warbler down by The Shunan I waited patiently with the telescope trained on the spot and sure enough the scratchy songster obliged with a song flight. Today a Redpoll sp flew over at lunch time and later a Tree Sparrow was again under the feeders. A little later I got onto a Tree Sparrow flying south out of the garden and it headed for a possible nest site, further investigation is required. I'm not sure if Tree Sparrow has ever nested in Orkney previously, so I'll need to make a bit of an effort to track them down.
I set the moth trap last night and caught... no moths. It was a bit cold. At the moment there is very little time at night when it is particularly dark, that won't help.
The new bit of meadow we began to try and establish last year is beginning to look quite good. Some pictures of Red Campion and Cow Parsley too. 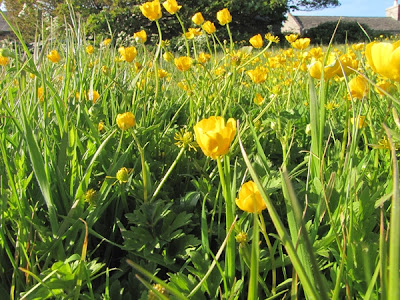 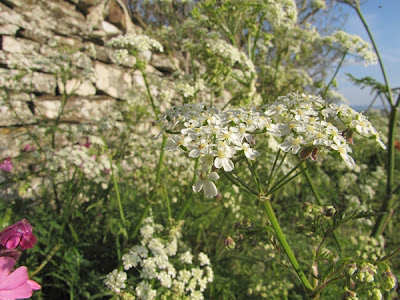 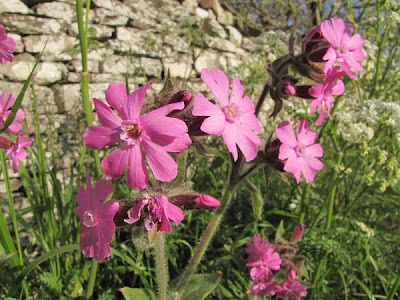