I went back this morning to get some pictures that were more than just a blue dot, and had great views, although the pictures are not that much better. 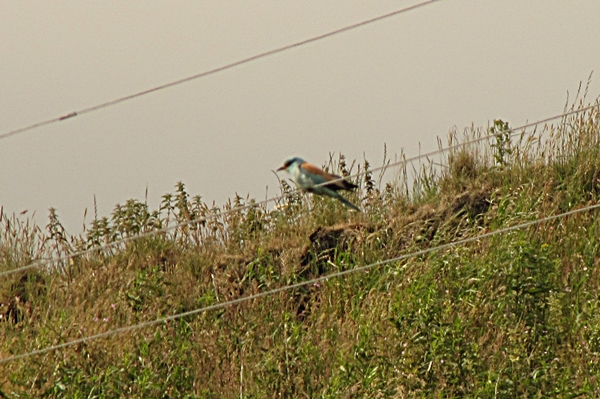 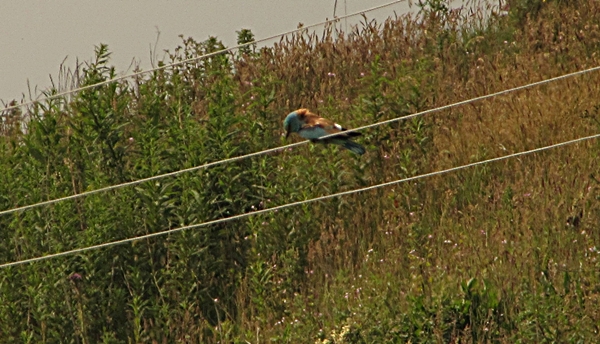 Posted by Alastair at 3:06 pm No comments: 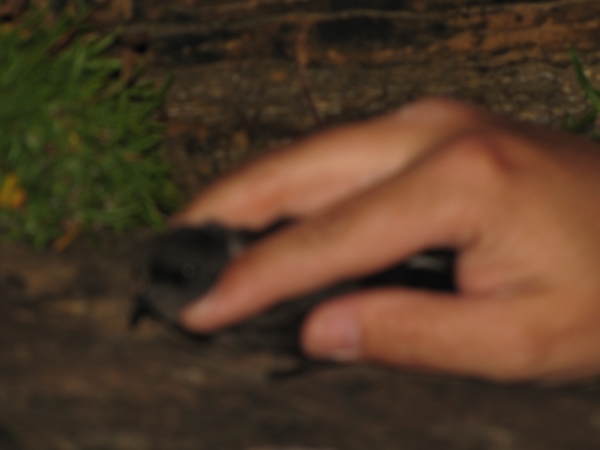 Photography has returned to the usual standard.

Went out with AL on his annual RSPB ringing expedition last night, only two birds were caught, but seen well flying around the nets as well. 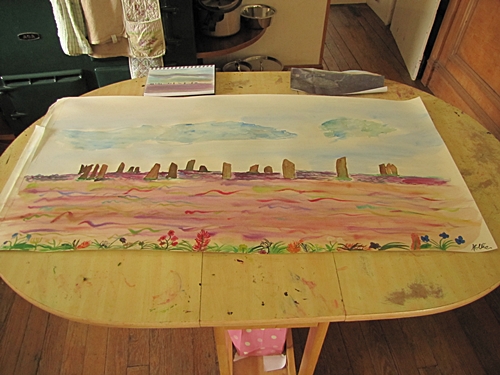 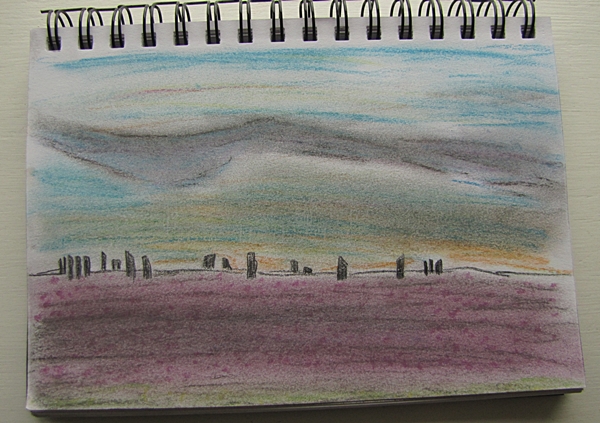 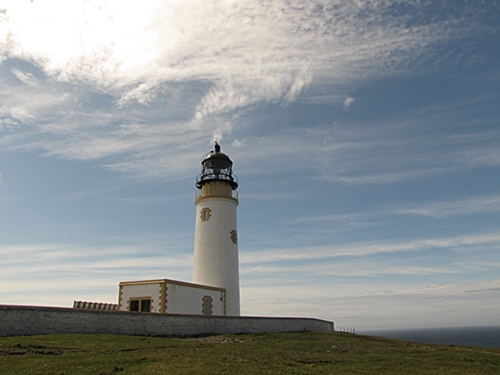 We've been Sooth as they say here, thus the lack of posts and birding activity. I guess Sooth is another story, mostly not to do with birds although I was pleased to see Marsh Tit and to get great views of genuine unpolluted Carrion Crows, but more of that in another post maybe.

The plan was that due to it being Louise and my twentieth wedding anniversary at the beginning of July, which we were yet to celebrate, our house-sitter would kindly look after our girls and we'd get away for a night out. The chosen spot was Westray and the very comfy Pierowall Hotel. Now Westray is not especially known for good birds so Louise had reckoned this was a safe bet methinks. Bad call. No sooner had we set out on our first walk when the text comes in, Sharp-tailed Sand, Swartmill Loch, Westray. Now Swartmill is down the south end of the island and we were north of Pierowall with no transport, Westray is quite a sizeable island as well: and there was the wedding anniversary issue.

Fortune smiled; Louise was gracious; I managed to get hold of DO the (only) birder on the island, who was the finder of the bird, and he kindly offered to come and fetch me; and having accomplished the locating each other and getting to the loch, after a nervous 20 minute wait the Sharp-tail appeared; smart. Well, that was unexpected. It would have been an excellent find, and if we had gone over using our bikes that might have been the case, as we would have stopped at Swartmill. As it was I was the second observer, and to some extent, never having seen this species before,  helped to confirm the ID.

The next day we did go for a good tramp, up north to Noup Head where seabirds were doing what they should be doing, fishing and breeding. There were thousands of Kittiwakes feeding over the sea and a constant stream of birds on to the cliffs. A very encouraging, and sadly rather unusual sight here these days.

No pictures of the chief suspect I'm afraid, but here are some other pictures from the weekend. 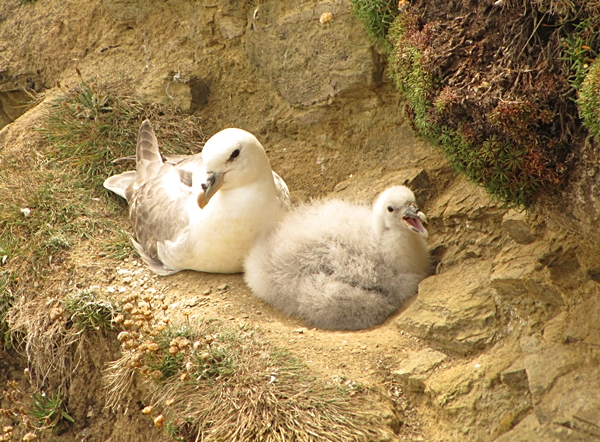 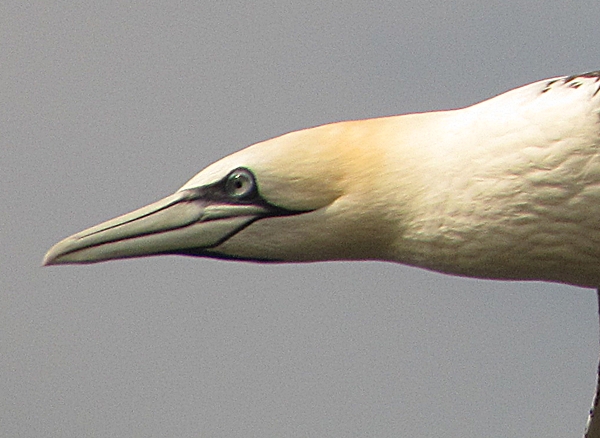 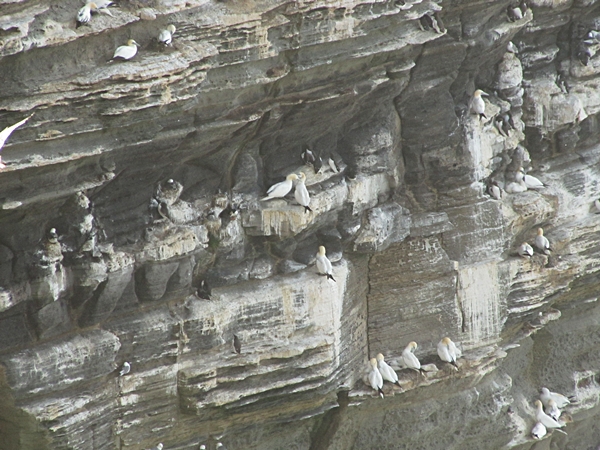 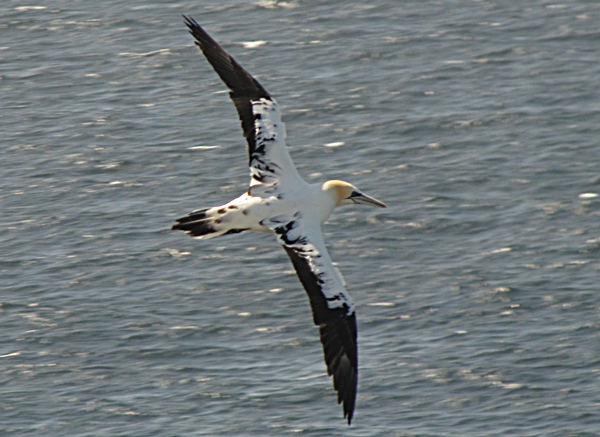 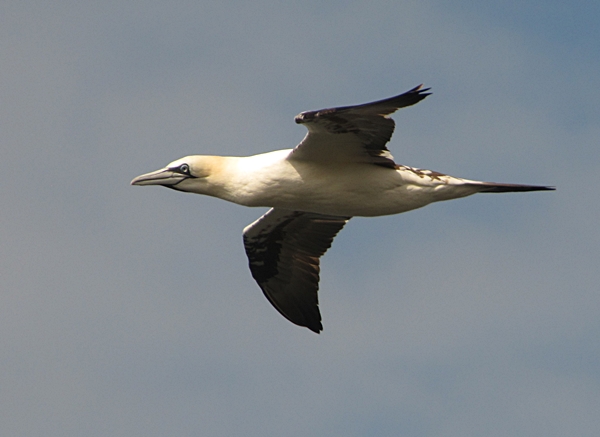 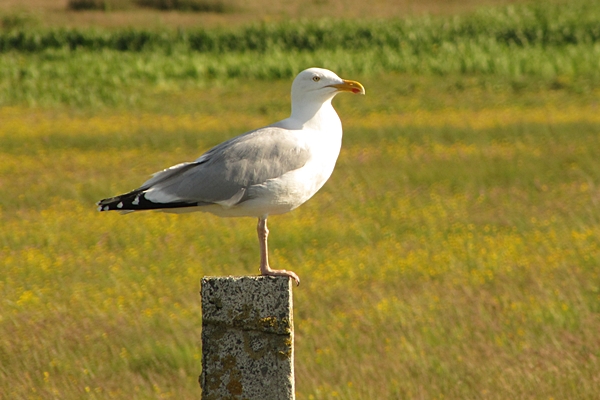 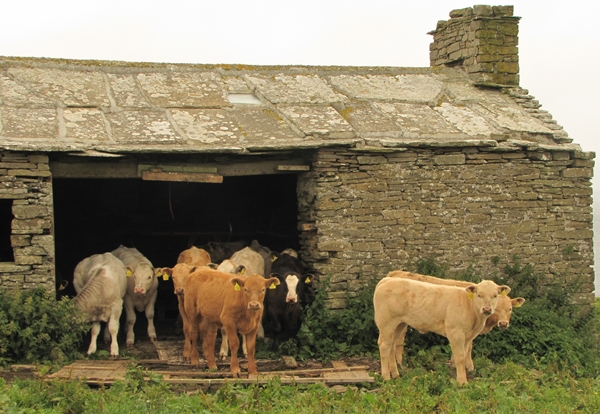 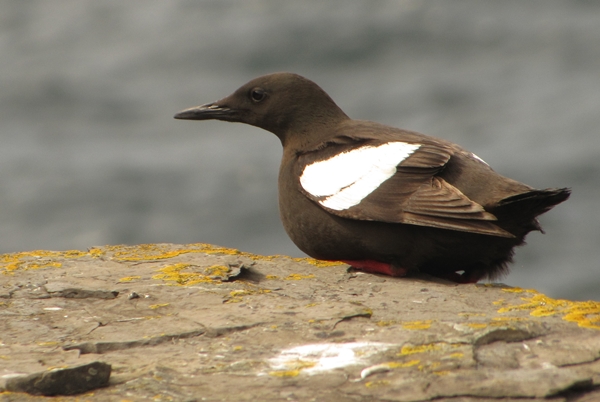 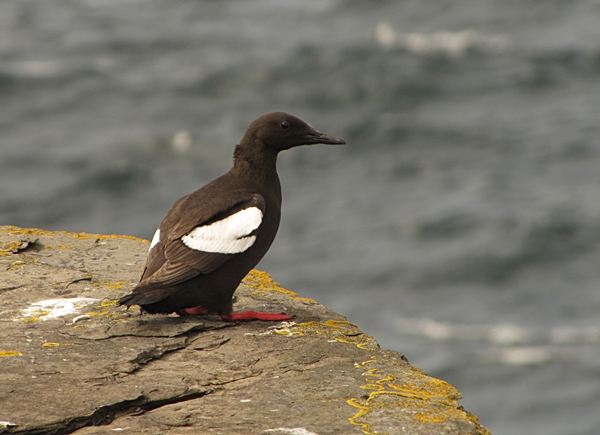 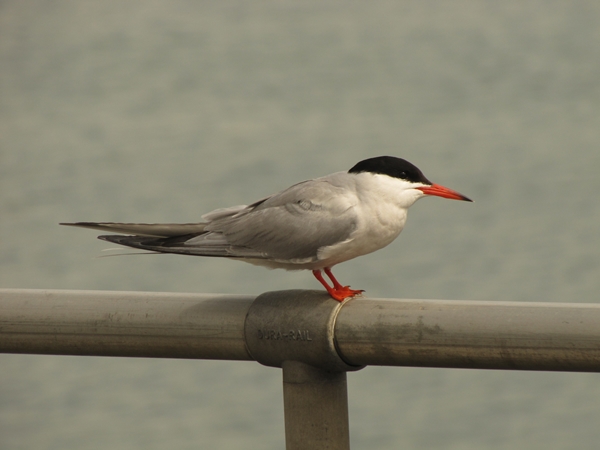 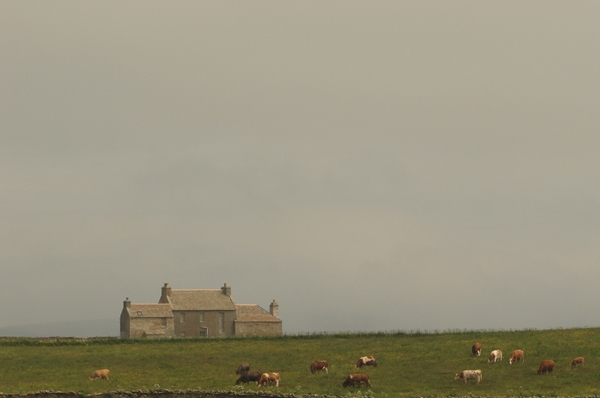 Friday I nipped over to Hoy. It was a beautiful sunny day (good job too, I'd forgotten to take my coat) with a nice breeze to keep the midges off. The plan was to look for Stonechat at Rackwick, a bird I haven't seen here for two years now, and then check the two plantations on the north-east side for other interesting things like Coal Tit.

An uneventful crossing, no big fish, cetaceans or juvvy Tysties.

A juvenile Stonechat appeared a shortly after I'd alighted from the minibus at Rackwick. After visiting the beach I then headed for the footpath to walk between the hills to Lodge Plantation. The short length of verge along the road to the footpath produced 12 Common Blue butterflies.

Not much to be seen on the moor but the usual pile of Bonxies bathing at Sandy Loch and also a Common Sandpiper making interesting distress noises there.

Time was short so I headed on to Lodge and across the wet moor where there were some interesting butterflies, I thought Small Heath, but they looked a bit big. Had a feeling I was making a mistake and of course I was, they were Large Heath actually a butterfly tick. A quick skirt around the plantation found only a Siskin, and the dog underwent a transformation when she bathed in one of those red peat ditches, gingery white dog now red setter colour.

Headed for Bu Plantation where there were more Siskin, Spotted Flycatcher, an awkward and elusive, non-calling Phyllos (probably a Chiff), Robins singing x2, Chaffinch singing x4 but no Coal Tit. On the way across the moor and around the plantations there were piles of moths including Silver Y, a likely Northern Eggar, more Common Blues and some large flappy butterflies which never settled (they must have been Meadow Brown but they didn't seem right).

Back to Lodge, now rather bitten (by Clegs), unexpectedly sunburnt (wearing shorts without a thought, doh!), and really very muddy (having helped the dog over and under various fences and stiles). However, at last, a Crossbill and then, having convinced the hound to climb the stile, a familiar call and eventually brief views of an adult Coal Tit.

So the whole expedition was a year listing success (racing JB for the best county list this year), but an entomological disaster as my id skills were proven to be pretty ropey. (Note to self, next sunny day in July take the net and gubbins, prepare by checking what I might be able to find re lepidopterans, give self more time in the best habo.) I had managed Large Red Damselfly along the way though. 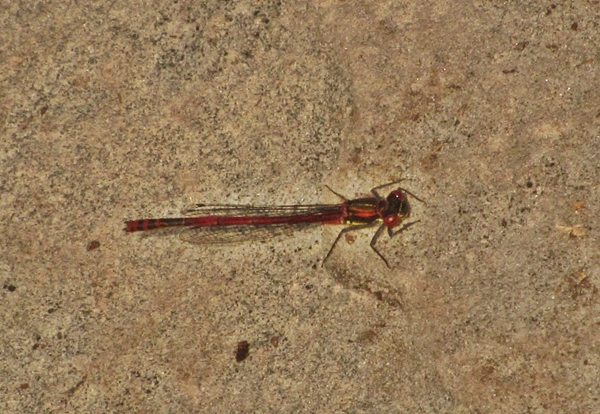 Plenty of comments by fellow ferry passengers that the dog had clearly had a good time, wonder why they were giving me such a wide berth? 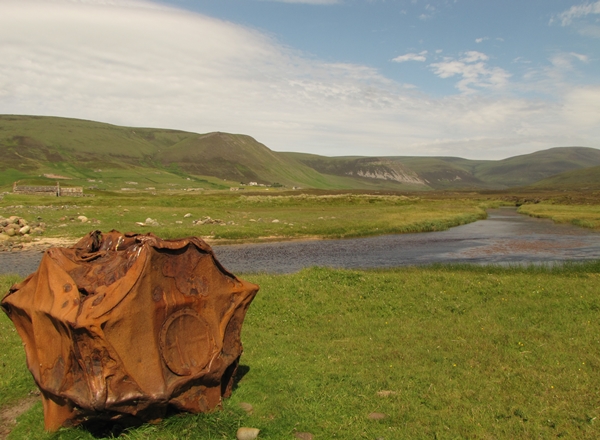 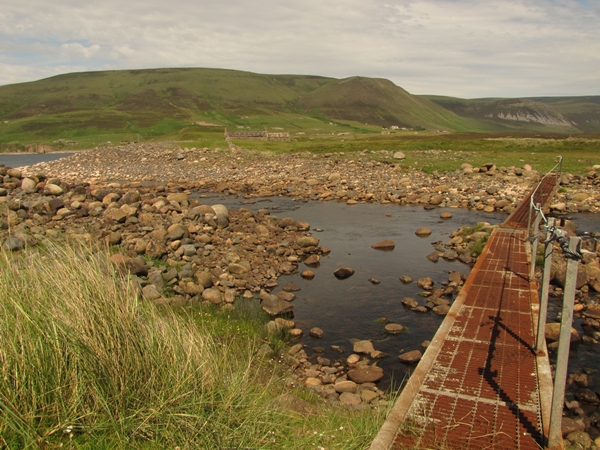 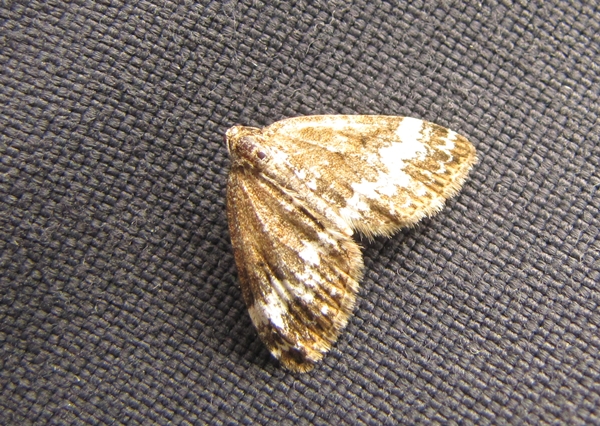 Another Small Rivulet from Friday's trap at home

At home today, having recovered somewhat, a Whimbrel on The Shunan, and another brood of Shelducks joined the existing gang, sending the resident dominant male completely apoplectic; a total of 19.
Posted by Alastair at 10:50 pm No comments:

I haven't put the light out much this year, its been so cold, but last night was perfect, warm and with a thick hoar. Good result too with Poplar Hawkmoth and Small Rivulet new for the site and a nice selection of other bits and bats.

On Monday I found a Dark/Grey Dagger in the greenhouse when I was sorting it out, not seen that before either.

Bumped into our new neighbours the other day down at Bosquoy, readers and birders... welcome to Harray. Apparently the Crane had paid us a visit, but I'd missed it; I will get one in the tetrad eventually. Star bird of late was the Hobby that powered past the kitchen window whilst I was enjoying white wine and a prawn paela, no spillage fortunately. Whether I'll get it accepted is another matter. Siskins continue to be present, and the Tree Sparrow. Jackdaw numbers are up to 38. The Kestrels have three fledged chicks. 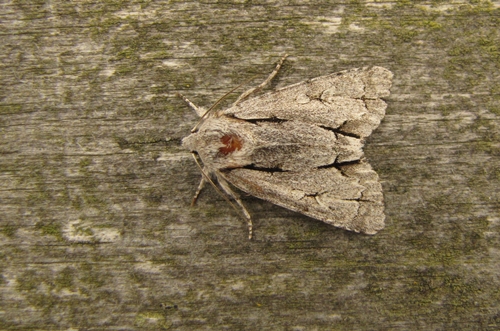 Grey or Dark Dagger (advice please, are these do-able without dissection?) 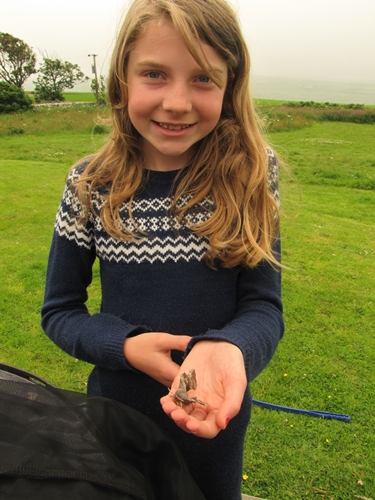 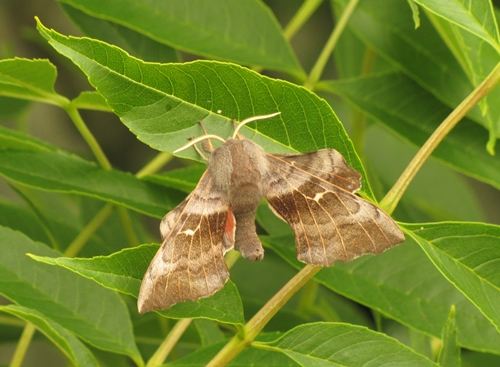 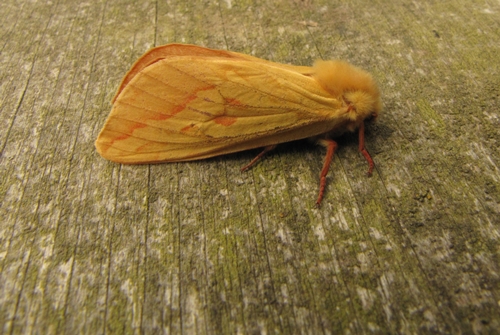 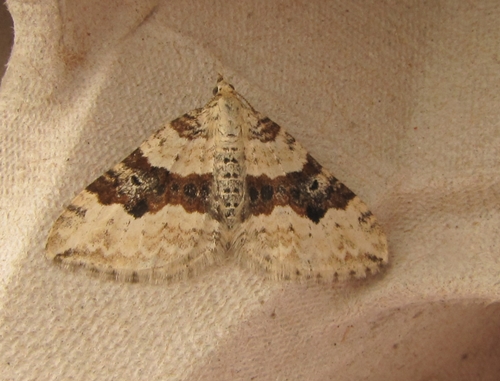 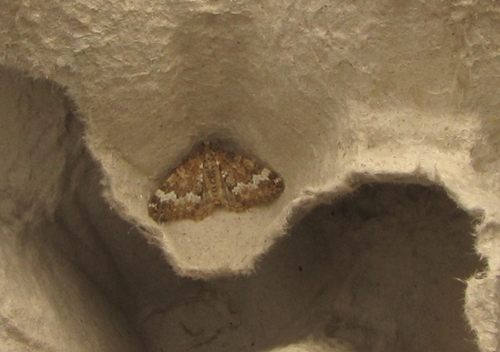 Small Rivulet (rubbish pic)
Posted by Alastair at 12:06 am 2 comments: 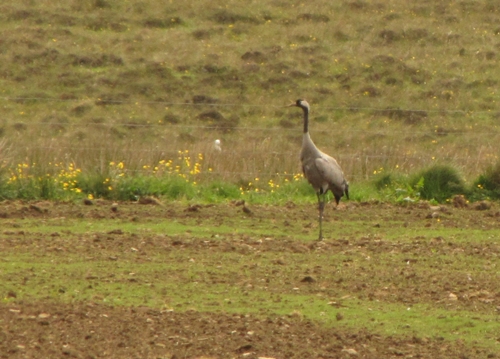