Almost no birding yesterday but today once the rain cleared I was out and about.on foot again. A hunt for Woodcock again and Song Thrush failed so into the fields to look for the Linnet flock, a flock a field or so down the hill, raise the bins, Snow Buntings, brilliant! I've only seen Snow Bunt on the patch once before in three and a half years. This was a flock of about 45 too. Nice.

Then, despite excluding the moor from my original Foot It spec I decided to go for Red Grouse. The hound was delighted at this decision and decided to spend 25 minutes chasing rabbits and hareas and repeatedly disappearing over the horizon. Eventually recaptured we headed for the likely spot, and probably due to my reticence to let her off the lead we failed to find a grouse. But a bonus bird was collected on the way home, a four and then a two Meadow Pipits. Foot It total 61.

Around the feeders today there were 34 Greenfinch, Tree Sparrow and two Goldfinch. Both male and female Hen Harrier were seen in surrounding fields and, awkward to find this time of year, six Snipe were flushed.

Talking about lights, taking the dog down the track in a blizzard this evening, massive lightening flash gave me a bit of a fright. The rumble was a few seconds later though. Bit of a surprise nonetheless.

Lesser Scaup or not...

Another FootIt outing, mostly to try to see the putative Lesser Scaup again and try to nail it. However the hound had other ideas and disappeared at top speed in the direction of Loch of Harray in pursuit of a Brown Hare. In the end this wasn't such a bad move as with a bit of application a nice drake Scaup (Greater) revealed itself amongst the large Coot flock. No sign of a Slav Grebe though. 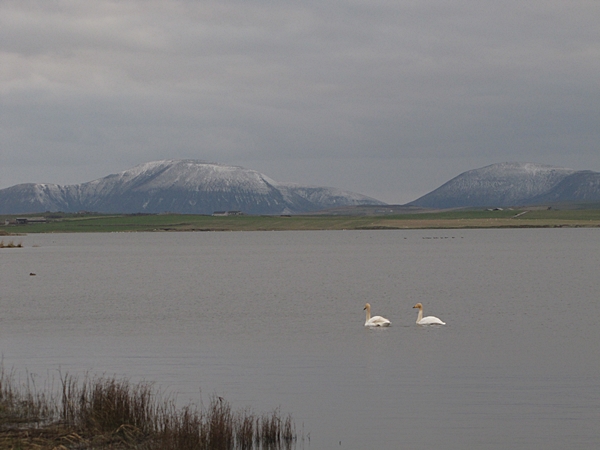 Nice Whoopers again, there are a few about currently

Back to Bosquoy and the suspect was quickly located. In the end, despite a good number of features that are good for Lesser Scaup a view of the the wing in flight indicated that the bird is something else, as I was pretty sure that the wing bar was white in the hand.

Back at the ranch there were still two Goldfinch. The Linnets seem to have gone with the cold weather and Woodcock and Song Thrush are still missing. 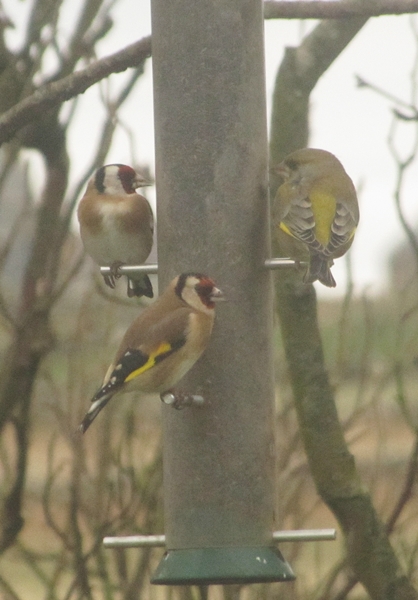 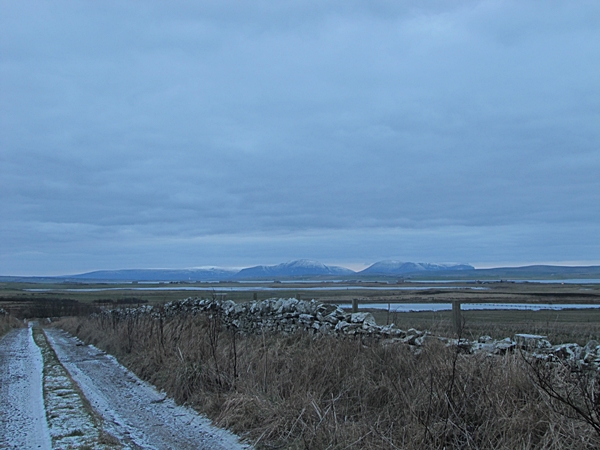 It's a bit chilly here at the moment
Posted by Alastair at 10:53 pm No comments:

Scooted down to Loch of Bosquoy with the canine assistant and found conditions to be pretty reasonable, the wind dropped and viewing conditions were excellent. Most of the Whoopers had left earlier, though two of the nine still remained. 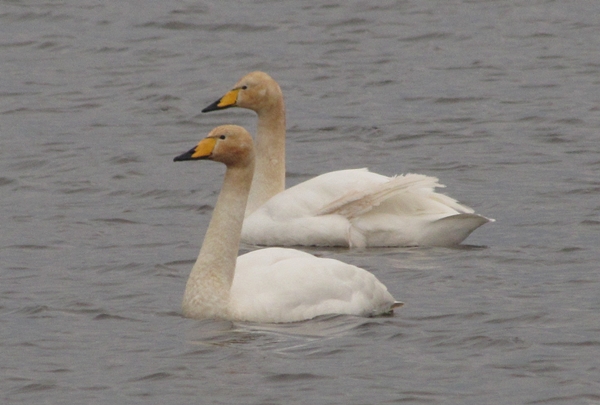 A quick scan of the water found the drake Goosander, for a few moments until the Peregrine arrived. Stooping at the Teal I watched it skim the lockh and settle on a wall. Great views were obtained, this was a sub-adult, so a different bird from the one I'd seen last weekend. When I looked back the Goosander had gone.

The hound and I worked our way down the loch, finding Pochard, Shoveler and Goldeneye on the way. The second small flock of Tufted were at the far end and an initial view raised my suspicions. Got a bit closer and the suspicions were confirmed, a smaller, paler Aythya, pale patches at the base of the bill, no tuft and an interesting head shape, best of all a grey bill with the black restricted to the nail. All looked good for Lesser Scaup. Seeing the wing was always going to be tricky though. The birds were feeding and none were wing flapping or preening. However a dog walking accomplice was enlisted (the land owner) and a flush... resulted in the ducks flying to the middle of the loch, the wrong way. A not great view seemed to indicate grey not white in the hand but the view was far from conclusive. Try again tomorrow.

Front bird is the suspect

When I got close to home the Peregrine was terrorising the feral pigs but without success.

A follow up visit in the afternoon had to be postponed to tomorrow as the chimney sweep arrived.
Posted by Alastair at 10:07 pm No comments:

There's no birding for me here during the week as its too dark. I go to work in the dark and return after the gloaming. Thursday was a bit of a disaster as I had to work late and it was the day the small solar storm (more just a bit of space weather) hit. I'd driven to the shop at sunset and there had been a bit of green in the sky. The plan was to go out when I got home as the urora usually seems to show here around midnight. This time it showed early evening, whilst I was in the meeting, and my tromping around in the dark and cold much later on was to no avail. Here's a link to what other folk saw... The aurora would have been a nice Foot It tick.

(CHANCE OF STORMS: NOAA forecasters estimate a 30% chance of polar geomagnetic storms today. The reason is an incoming CME, which could deliver a minor blow to Earth's magnetic field during the next 24 hours. Arctic sky watchers should be alert for auroras.)

Anyway, about to embark on today's FootIt mission which is to try and find Goosander and the putative Lesser Scaup at Bosquoy and on Harray, better go and get some breakfast. 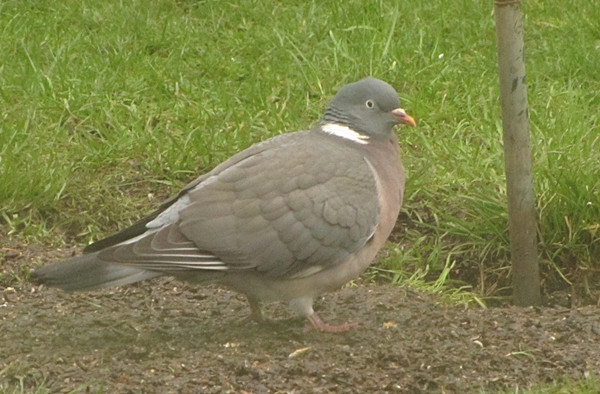 A surprise under the feeders on Saturday morning

Woodpigeon has not been present here since the end of October and last year the first returning bird was 17th February with the majority not back until May. So not on the predicted FootIt list and a real bonus. Prior to that, a rather bleary peer out of the kitchen window had produced this... 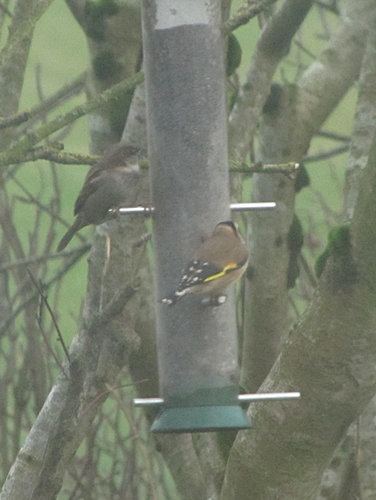 I don't see too many Goldfinches in the garden each year, but they do tend to turn up in mid winter, another Foot It tick without even venturing outside.

I did walk the dog though and coming back to the garden a Sparrowhawk flew over the house. 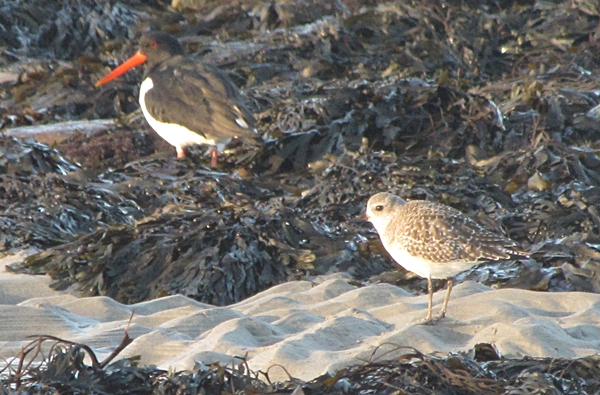 Then it was down to Birsay to cover the seaside patch. One of the loose ends that needed tidying up was Grey Plover which I'd missed last weekend. They're not common here but this one had been faithful to the same patch of sand before the New Year and I'd hoped it might still be around. The single and rather elusive Snow Bunting was located on The Links as well, and when I drove away a Merlin flew across the fields. 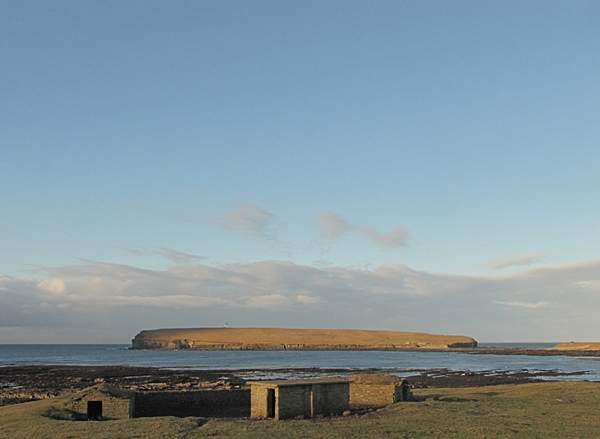 Today dawned wet, it rained pretty much all day, I wasn't feeling very enthusiastic. Had to take the dog out though and in amongst the Linnet flock a familiar call was heard, Twite x4.

Two male Hen Harriers visited the garden or the neighbouring field mid morning, the second one spending a few minutes hunting through the veg patch. I was slightly uncoordinated when a wee beastie shot past the kitchen, just couldn't get enough to nail it as a Merlin. However, sitting down to lunch and a Peregrine made a close pass on a mission..

Late this afternoon Louise and I ventured out in the wet again, at least the wind had dropped, another very early bird for the year, a Shelduck on The Shunan, previous earliest 31st January. Moments later, with the dog on the lead but sniffing along the hawthorn hedge and out popped Short-eared Owl.
Posted by Alastair at 11:26 pm No comments:

Patchwork and Foot It

Yesterday was spent tramping around the home patch. It was a beautiful, sunny calm day, until evening when it rained. Ideal for searching the lochs. Most things gave themselves up in the end except for Slav Grebe and Scaup which proved elusive. 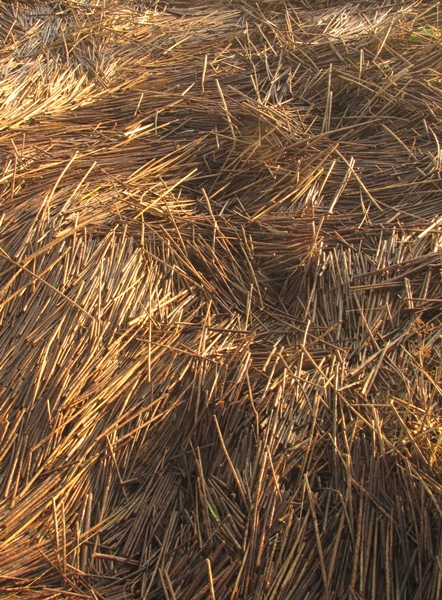 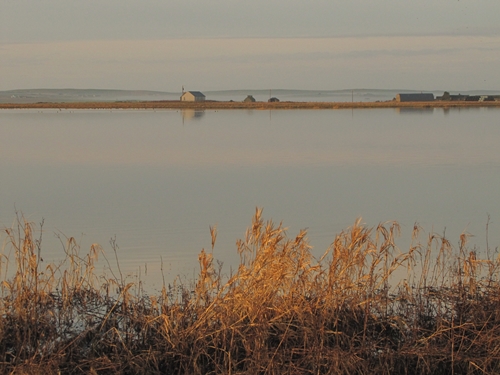 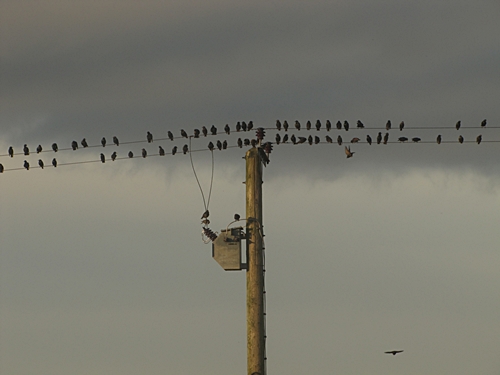 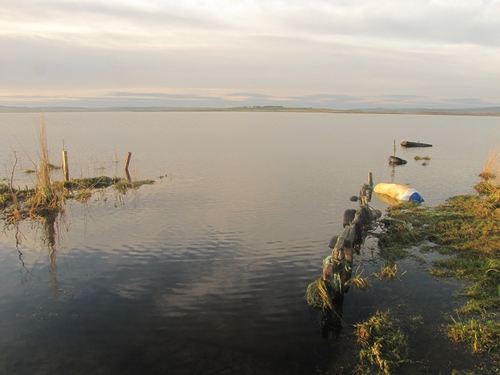 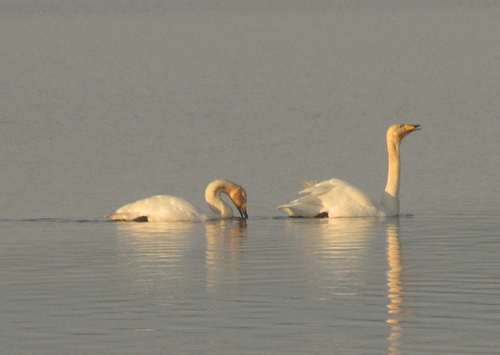 This morning I headed over to The Brough and had an hour before the tide came in. Fulmars were going at about 1400 an hour and I added Kittiwake and Guillemot. Best bird was a Great Northern Diver sitting off the eastern end, not so common in this bit of Orkney. 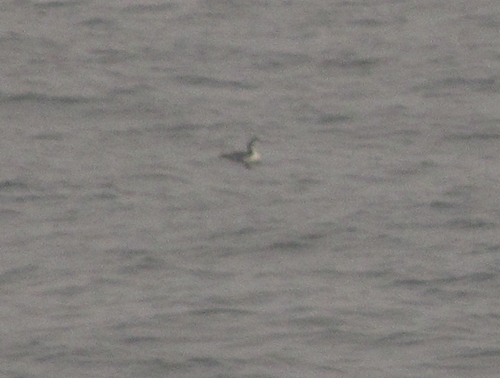 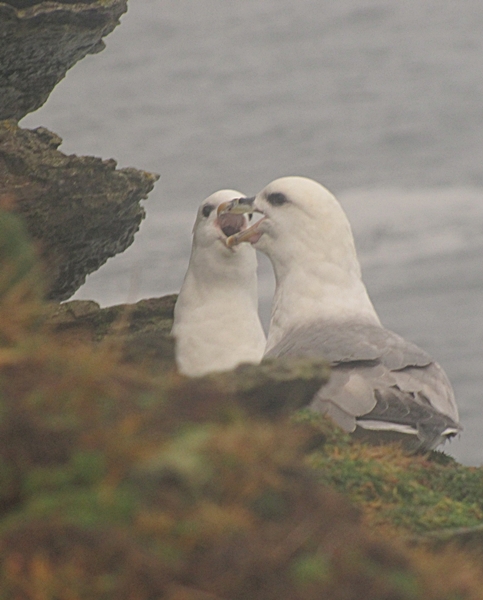 Fulmars and Guillemts were on the cliffs

On the way home I managed to locate the Loch of Banks hybrid crows, very interesting birds, each at the furthest end of the hybrid continuum. This afternoon was track mending time but thinking that a raptor or two would be possible I walked down with the barrow rather than use the trailer. I'd barely got beyond the front gate when an adult Peregrine shot through. Nothing showed down at the heap but strangely on the way home a Kestrel showed at almost precisely the spot the Peregrine had been seen earlier.

This year I will be finding rare birds in Harray, at Palace, on The Brough and on North Ronaldsay and Sanday.

This year's ambition birds are: my own Lesser Scaup, King Eider, White-rumped Sandpiper and...

In the garden I will be looking forward to Red-backed Shrike and on The Shunan a Curlew Sandpiper.

From The Brough Great Shearwater and Sabine's Gull will be very well received.
Posted by Alastair at 12:38 am 1 comment: