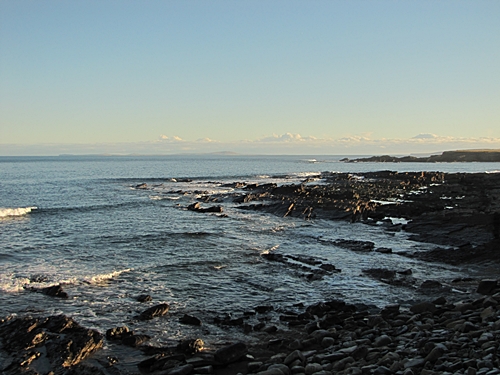 Lovely weather this weekend, calm and sunny. Today the clarity was brilliant, I've never seen Westray so clear and a whole range of snowy covered hills could be seen across the Pentland Firth into mainland Scotland. 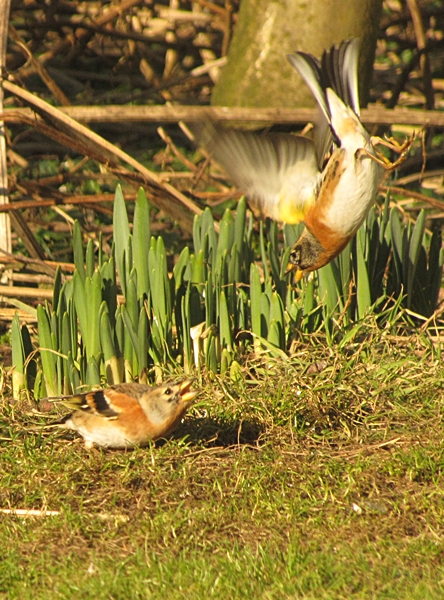 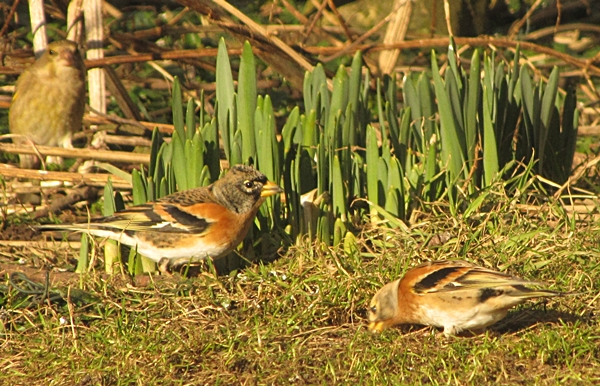 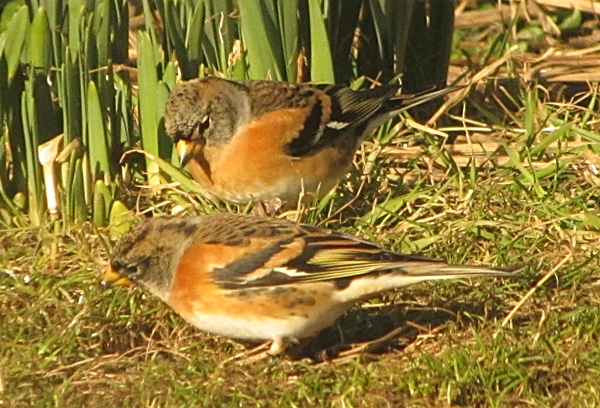 The main interest is in and around the garden where there are signs of spring. Last weekend Goldfinch was singing when the "flock" had grown to three. A real charm of four this weekend and possible, if distant and brief singing heard again. Song Thrush was singing last weekend and was doing its cheery stuff again early a.m. and late p.m. As expected Woodpigeon made a brief appearance but still waiting for Lesser Black-backed Gull, although saw one last Saturday in Kirkwall. After the absence last weekend there were Bramblings here again with 18 today. Also two Reed bunting were in the bottom Rosa.

Distant Skylarks were seen from the garden, the first for me this year, also heard singing at MarWick.

Not so much at Birsay but Long-tailed Duck is uncommon at Palace so one there was a bonus, a flock of Twite and Fulmars going west at 2,500 an hour.

A trip to Stromness to take the girls swimming enabled a bit of a walk at Warbeth. 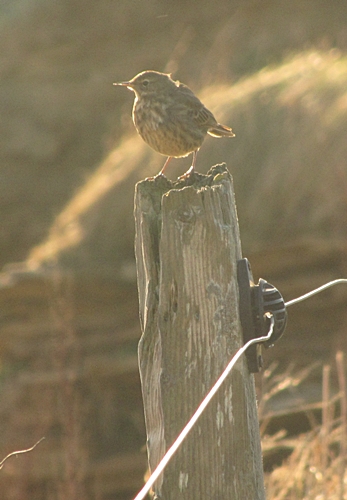 On Friday there was an amber aurora warning (http://aurorawatch.lancs.ac.uk/) trouble was it was during the day, that's not much good. The same thing happened yesterday afternoon as well, not quite a strongly (a yellow warning). When I went out in the first dark yesterday it was cloudy and raining as well, and although it did clear later and there was a bit of a glow and a single flash of light from the north nothing was going on. Disappointing.

On the bird front the first signs of spring are indeed here, although the weather would not be leading you to that conclusion, ice and light snow showers today, freezing easterly breeze. However, a pair of Shelduck turned up on The Shunan on Friday and took up territory. On Thursday night the first Oystercatcher of the year had flown over and yeserday there were five in the fields by The Shunan and two at Bosquoy.  Noisy time has arrived, although maybe the new double glazing will reduce the night-time piping, I hope it doesn't entirely eliminate the sounds of the night though.

If I were still doing Foot It, which I am still keeping a list for, I'd have been dead chuffed with today's Fulmar and Kittiwake. Fulmar would have turned up eventually in the summer I expect but I've recorded Kittiwake only once before from the patch, in thick fog in April (and then in the new section which is outside of the tetrad), so a good record. Also on the Patchwork list this weekend Slavonian Grebe, but I drove down to Hyval, a pony feeding and sorting out excursion, so not a Foot It species. 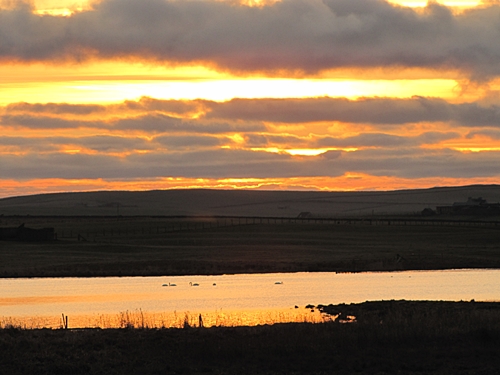 We went to Yesnaby yesterday afternoon, the light was stunning and the sea still had a mighty swell. Despite a good search around the Gyr could not be relocated though. 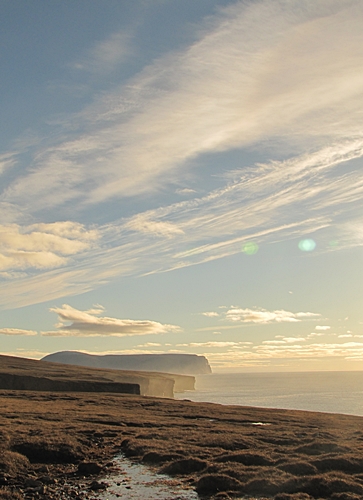 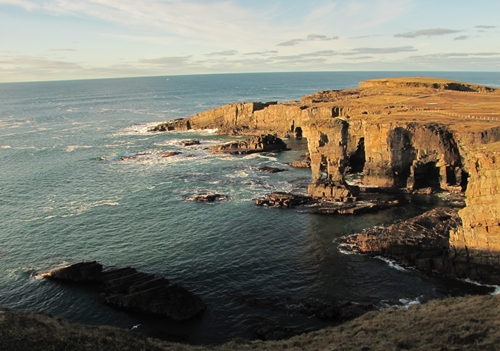 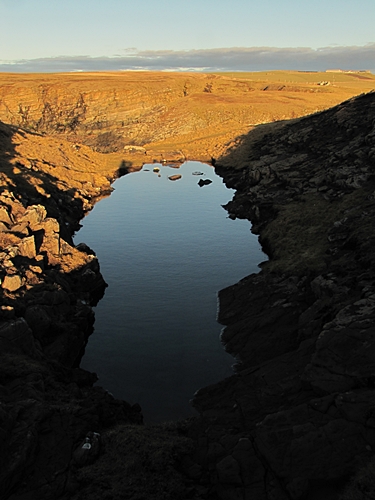 In the morning I'd walked Bosquoy with the hound. Taking my time and counting and searching, a WeBS count. The odd Aythya could not be seen amongst the 86 Tufties. Little Grebe was obvious (bet it won't be next month for the bird race) but otherwise an unexceptional outing.

This morning it was Birsay, and Palace produced a nice adult Glaucous Gull and a Fieldfare. There were at least 120 Purps and a nice flock of 46 Twite. It was the flock of crows that took pride of place though, 47 Hoodies, a pale hybrid and the best looking Carrion Crow phenotype I've seen here. No telling if the CC has any Hoodie genes but it had no grey feathers and the plumage had a smart sheen in the morning light. This blows my theories away possibly as I would have generally reckoned that Carrion Crow is a passage bird only, this individual my dispell that idea. 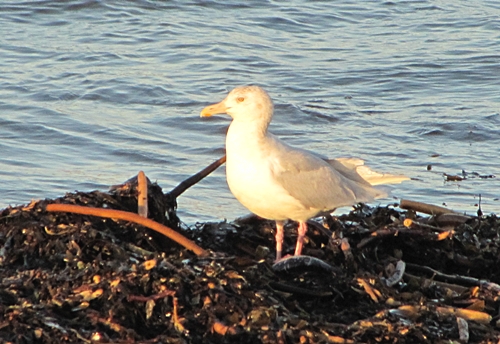 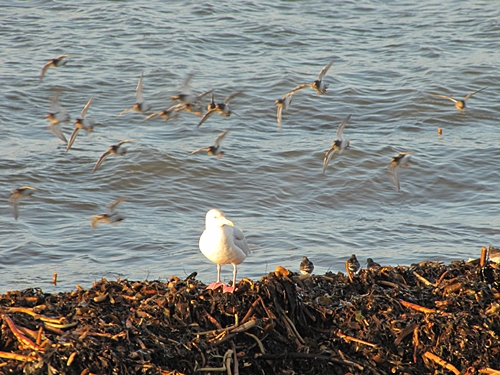 At home the Brambling flock is still under the feeders, two Goldfinch are continuing to visit the Niger, the Tree Sparrow showed well and the male Hen Harrier that has taken to hunting through the garden was seen closely a couple of times. The Linnet flock is down to 14 though and still no Skylark or Meadow Pipit in the ajoining fields. Rooks roosted on Thursday night when 110 came in at 17:40, they probably roosted last night as well but I didn't check. 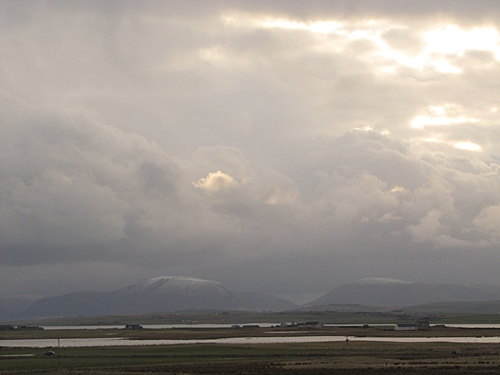 Here's the latest aurora news...
The CME, which was captured in flight by the Solar and Heliospheric Observatory, billowed away from the sun at 800 km/s. The bulk of the cloud looks like it will sail north of Earth. Nevertheless, a glancing blow is possible as shown in this 3D model of the CME prepared by analysts at the Goddard Space Flight Center. High-latitude sky watchers should be alert for auroras on Feb. 12th when the CME passes by.

Posted by Alastair at 9:58 pm No comments:

Only one of yesterday's Bramblings remained and I didn't get out much as medium westerly with strong gusts when the rain squalls came through made it unpleasant a.m. By the afternoon things had quietend down a bit and I was outside for much of the afternoon but doing garden jobs. Bird of the day was the male Hen Harrier which repeated yesterday's trick of hunting the feeders and appearing just outside the kitchen window.

The weather is winding itself up for another blast with gusts of 60mph forecast for tomorrow, 30ft + seas early Tuesday a.m. Last Wednesday's gale blew four of the scaffolding planks off the scaffolding currently on the east end of our house, as chimney and roof repairs are in progress. Glad I wasn't underneath, also glad the wind wasn't blowing the other way - bye, bye conservatory... 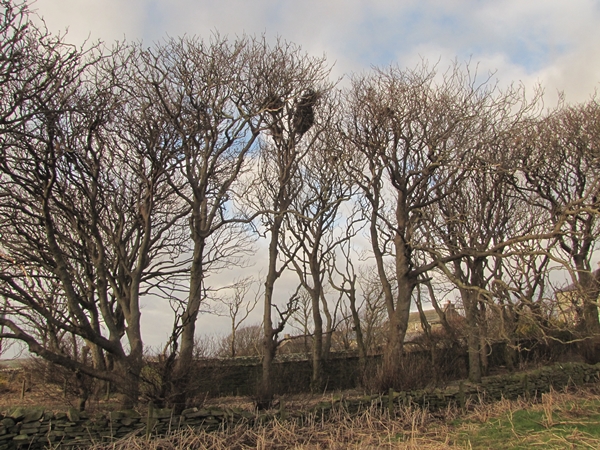 Rookery, the 80 nests are now rather reduced

The familiar green garage doors are no more, they nearly blew away Christmas Day 2011 but survived the storm. They didn't survive the attentions of Window Craft however, kitchen now considerably warmer. 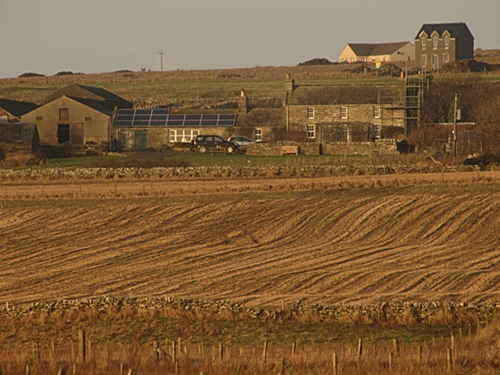 
Space weather info... SUNSPOT OF INTEREST: A break in the quiet could be in the offing. Sunspot AR1667 is crackling with C-class solar flares and appears capable of producing an even stronger M-class eruption. The sunspot is turning toward Earth, so future blasts would likely be geoeffective. Solar flare alerts: text, voice.
LOUD SOLAR RADIO BURST: Yesterday, Feb. 2nd, the solar activity forecast called for "quiet." In fact, says amateur radio astronomer Thomas Ashcraft, "it was really loud. There were several strong solar radio emissions including one super-strong Type III burst at 1954 UT. I captured it at 28 MHz and 21.1 MHz as it totally drowned out a short wave voice transmission."
Posted by Alastair at 9:46 pm No comments:

Louise has gripped me off with Buzzard, Brambling and Merlin of late, none of which made my January Foot It list. The Buzzard was seen in January too. On Friday she reported Brambling under the feeders so it was not surprising to find a colourful host, 28, in the garden this morning. 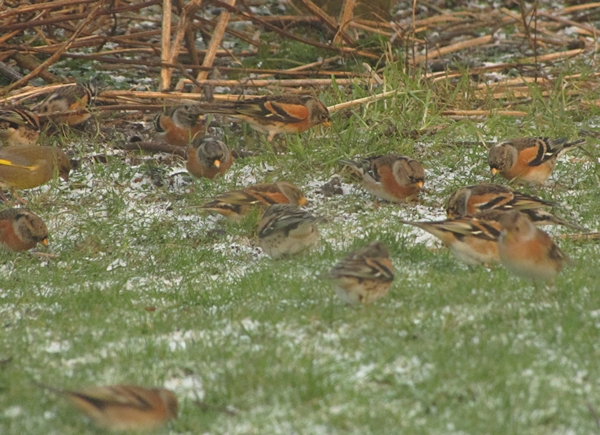 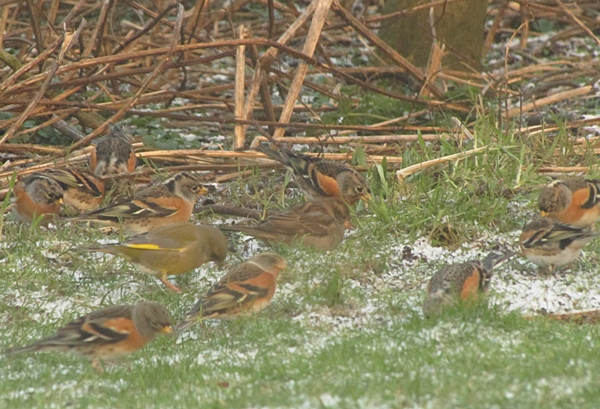 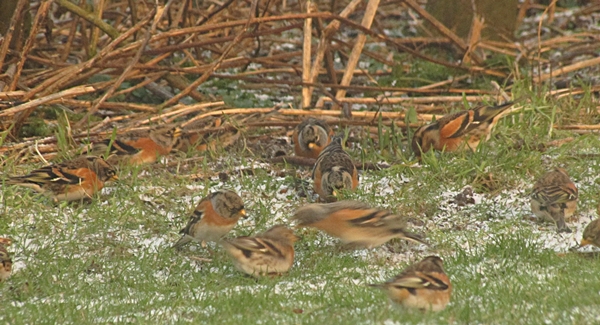 I stepped out briefly with the dog and blow me a Song Thrush was about the first bird I saw. That would have been two more and brought me to well over 107%. As it is I will be satisfied with my 105% with three over the 58 target.

It took me a while to look at the phone which quickly reminded me that a Gyr had been seen yesterday just 15 minutes away by car. It had been relocated and was showing well. Bundled complaining youngest offspring into the car (had already fallen out with oldest one who had gone to the ponies with Louise) and set off. Unusually for me I arrived at the appointed spot and immediately located the bird. Huge numbers of birders then arrived until, including offspring there were ten of us twitching the Gyr. I was very surprised at the colour of this bird which was a white morph but had a lovely gingery tone to the breast and under parts and to the face and crown. Great views enabled me to see a grey cere, eyering and feet so it certainly isn't an adult. 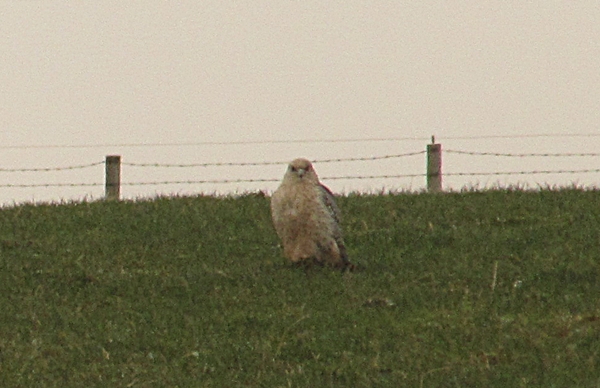 Not the best photo...

Had really good views of it in flight too. At one point it bombed off towards a spaniel which was quartering some rough ground nearby. Initially it appeared to be hunting the dog but in fact I suspect it was getting in close in case the dog put some prey up.

After all this excitement I barely had time to nip down to Bosquoy where there was a drake Goosander and good numbers of duck but nothing to get the pulse racing.