Following the incident with my back three weeks ago I decided to invest in a Scopac or similar. Now although one of my birding mates has one of these (and sorry NC) but this is a bit of kit that has always seemed a bit dude-ish to me. However, given the circumstances and the choices there seemed no option - permanently damage my back or not be able to take my scope with me. A quick trawl including BirdForum seemed to indicate that the MulePack might be the more robust bit of kit (the Viking offering being indicated as duff from kick-off). Some reviewers reported a vulnerability with the ScoPac design. Only trouble was MulePack is only available from two sources, Focalpoint and CleySpy. I will never buy another thing from Focalpoint as they let me down really badly a few years back and unfortunately CleySpy appeared to have an islands delivery excess payment of £10.95; I usually won't have anything to do with this as it's often a complete scam, you pay it and the gear is delivered by Royal Mail. However, the good folk at CleySpy waived the charge, and what is more got the gear to me for today, it was ordered Thursday p.m. that's an ace service. What's more, first impressions are really good. I've a good range of rucksacks from a treking and hill walking past so know a thing or two about the design of these things. The Mule Pack doesn't have any obvious design issues and looks well made. After  a bit of a struggle putting the tripod on it, might have helped if I'd read the instructions, it appears to work really well, comfy to wear and the tripod functions fine with it on. The Velbon carbon fibre tripod does help, in that it is very light and my "walking" scope is the Zeiss 65 which isn't too weighty, probably the whole setup is a pricey but pretty good combination. 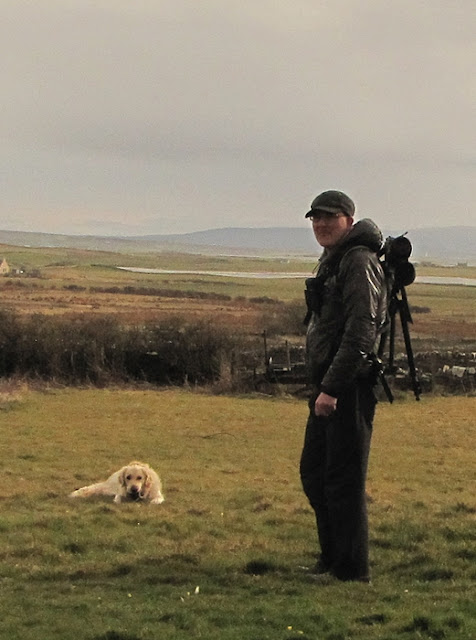 Birding, oh yea, Swallow yesterday and today, the first two. First was at the bottom of the track as I returned from work and the second was a fly by from the car by the Harray Potter. Goldfinch in the garden yesterday too, also seen today. New for The Shunan was a Red-breasted Merganser, a drake today. In recent days Black-tailed Godwits have reached seven, there has been a pair of Pintail and the Snipe have finally got going and are "singing" and displaying daily. Bonxies are now becoming rather common place.

A walk up on the moor today found a pair of Red Grouse and Merlin as well as further increases in Skylarks, Meadow Pipits and waders. A trip to Stenness found Buzzard, male Hen Harrier and SEO. 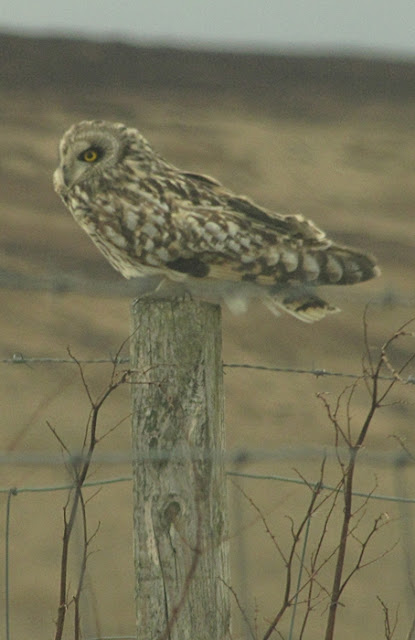 One of the pair of the Oystercatchers at work is ringed. 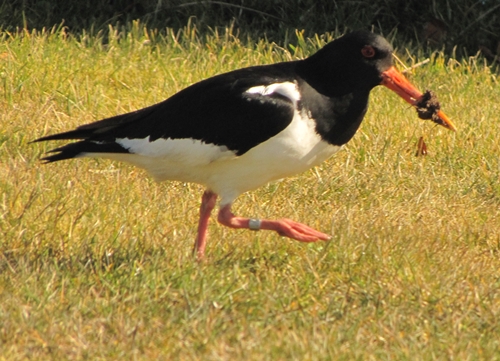 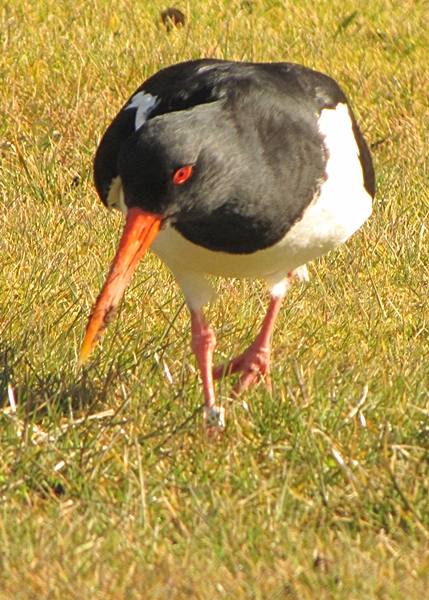 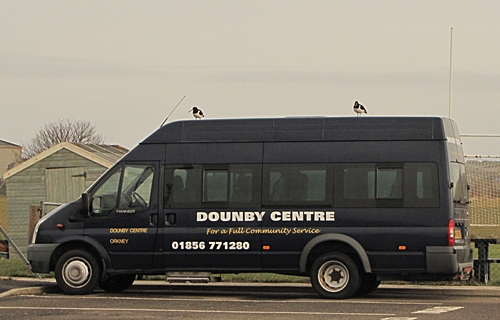 It would be good to be able to read the ring, but attempts at photographing it were a bit of a failure, wrong angle. Here is their frequent early morning perch.
Posted by Alastair at 11:25 pm 2 comments:

A walk on the moor on Thursday showed the impact of the previous few days of fine weather with plenty of Skylarks and Meadow Pipits on territory, Lapwing and Curlew displaying and on territory and plenty of pairs of Greylags carving out seasonal homes. A Redwing and a small flock of Fieldfare were also present, on their way north presumably. The evening finally produced the rather overdue Black-tailed Godwit on The Shunan as well as a roost of 31 Lesser Black-backed Gulls.

Jackdaw tracking in the evening, whilst not conclusive, pretty much demonstrated that the population breeding on the Mar Wick cliffs roost in our rookery. Jackdaws being surprisingly difficult to track as they fly low and fast in the dusk heading for the roost.

On Friday the feeders were visited very briefly by two male Siskins (there have been a few elsewhere in recent days). The Black-tailed Godwit continued to be present on The Shunan. The highlight though was AL's excellent talk at the joint RSPB/OFC meeting in the evening, all about the Orkney geese. AL's neck collar scheme (orange, three capital letters in black) have shown that the "feral" Orkney population, whilst generally staying within a few klicks of home, have within their number a few travellers. A few seem to be migrating to Norfolk annually, one of which overshot last year and ended up staying on Faroe for the breeding season (it's a young, non-breeder), currently back in Norfolk. Greylag Goose is a controversial bird on Orkney as the winter and "feral" populations have both exploded over the last 30 years. As 6 Greylags = one sheep in pasture consumption.. They also damage barley and neeps crops. 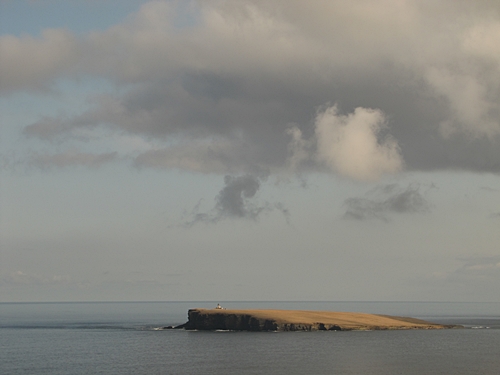 An early start yesterday found me on The Brough of Birsay, on a rising tide to make it more interesting. A rather rapid tour of the island found the usual suspects and it was only when I was approaching the causeway to leave that first a Bonxie cruised by and then a Wheatear appeared on the beach. In Palace more migrants were to be found in the shape of a Robin and a Chaffinch. Seawatching from Pt of Buckquoy produced several hundred Greylags heading north, three more Bonxies and 2 Puffins. A Carrion Crow came south with  Hoodies from the Brough and the same or another came south at Buckquoy. Subsequently there were two on The Links, all of these were given reasonable scrutiny and none showed grey feathers.

An unusual visitor just outside the front view from the kitchen window. 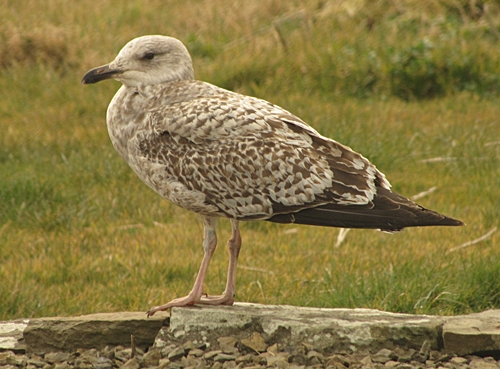 South-easterly gale overnight with rain, now calm and damp, should really find me in the field...
Posted by Alastair at 8:46 am No comments:

We've woken up to snow most mornings and today it snowed for a good bit during the morning, nothing sticking mind. Mostly over the last fortnight its been generally sunny but very cold. A Wheatear was seen at Mar Wick today.When I was there on Monday, looking for Jackdaws it was still and sunny and wheatearless. 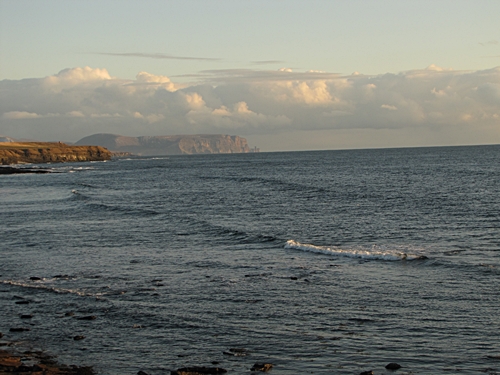 Amongst the 61 Jackdaws at Mar Wick I found one likely monedula (Nordic Jackdaw), it was a tad distant though. I'm pretty sure that these are the Jackdaws that make up the majority of our roost, all I need to do is track them over the eight miles or so as they fly in...

I managed to relocate the Loch of Banks black crow and get some photos. When I saw it previously I was pretty sure it showed some grey feathers but these, rather distant, photos don't show any. 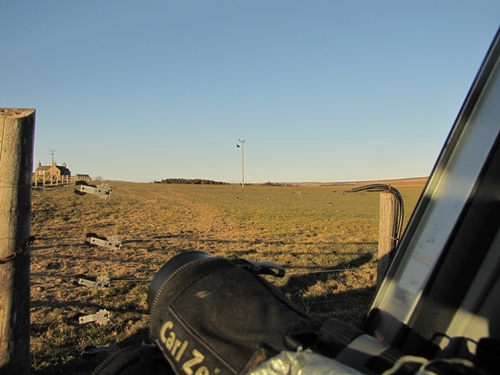 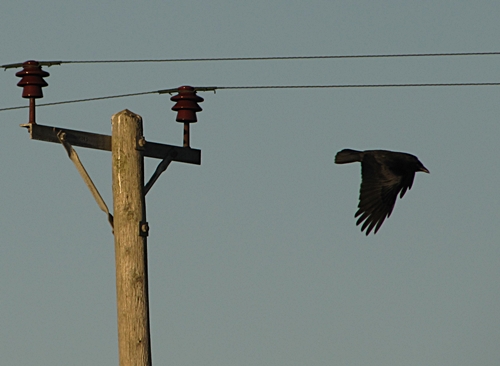 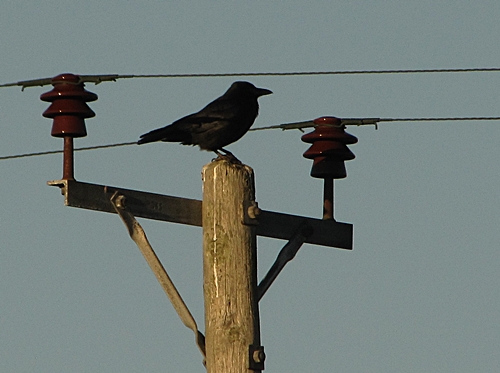 ...but I'm unconvinced, I think that the breast seems to have a brownish hue..., I need to get closer 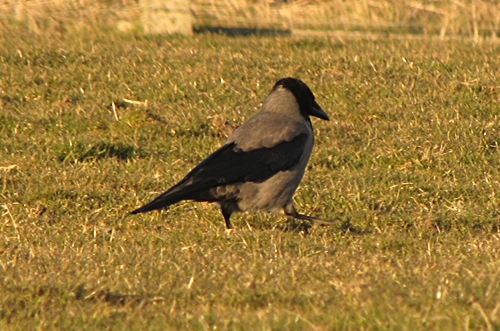 This was just down the road, it might be the most subtle grey hybrid yet? (Looks like a black feather in the mantle.)

This is getting a bit obsessive. Neither of these birds is currently identified. Both would appear to be paired and on territory, with the near black/carrion probably nesting with a grey hybrid. More observations required. 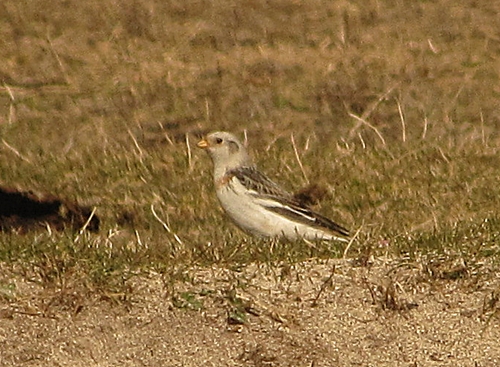 This was rather nice at The Links on Sunday 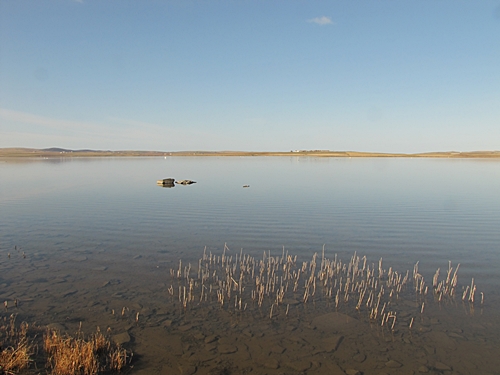 Plenty of Song Thrush about and the occasional Fieldfare moving through. A feature of Monday and Tuesday were the numbers of Skylarks that appeared to be moving through, 10 or 11 each day. Yesterday evening there were at least 800 Pink-feet in the field behind the house and on Monday evening at Mar Wick there had been 200 Pinks in the fields and an additional 110 flew north. 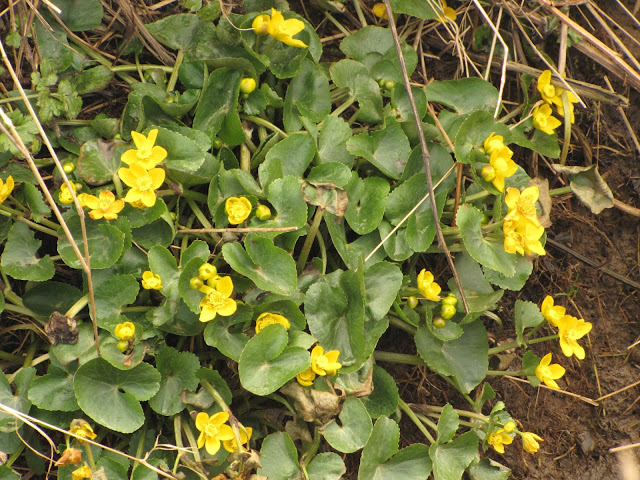 However, at the moment it's just as likely to be like this... 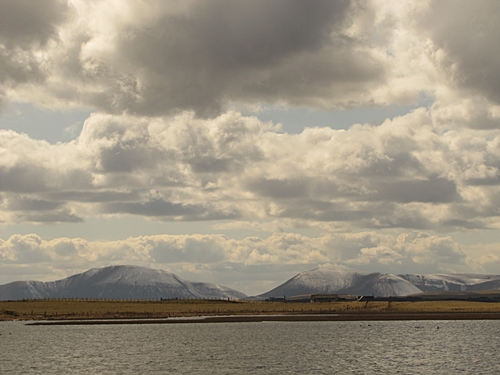 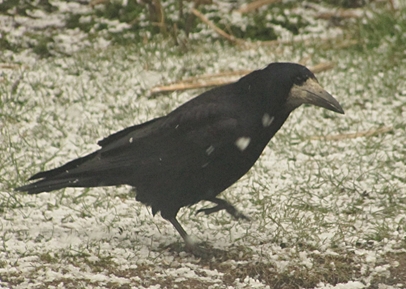 Getting the shopping out of the car on Saturday afternoon I did something horrible to my back, birding currently reduced to mooching about at home. A Robin on Saturday morning indicated a bit of movement. On Monday there were two Chaffinch, and Woodpigeon and Song Thrush were singing. On Tuesday Bramblings were up to 14 and the tilling and drilling in the surrounding fields produced Lesser Black-backed Gull 3, a pretty lowly total compared to last year if my memory serves me.

The doctor had worked miracles yesterday morning and by the afternoon I was more like my usual self, still a bit short on sleep, thus this night time post, having woken up frozen up. 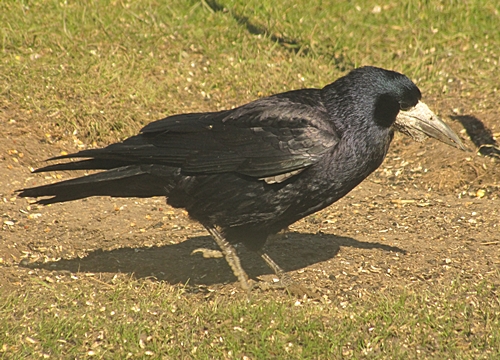 Rook at the feeders, very few of the colony dare to do this but a good few are in the Rosa behind the feeders tearing off sticks.

More rook stuff on the Parliament blog.
Posted by Alastair at 3:03 am No comments:

Please look at the new crow page if you would be interested in helping with my observer survey about identification of crow hybrids. The basic survey can be found at the bottom of the right hand panel of this blog, please scroll down. The more complete survey, which you might like to complete if you regularly contribute data to BirdTrack, or took part in collecting data for the three breeding birds of Britain atlas projects, is here http://www.surveymonkey.com/s/FP8J78J 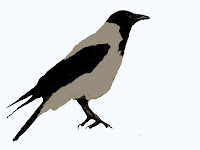 Orkney observers - please don't complete this survey if you contributed to the Orkney specific survey previously, thanks.
Posted by Alastair at 8:14 am 2 comments: