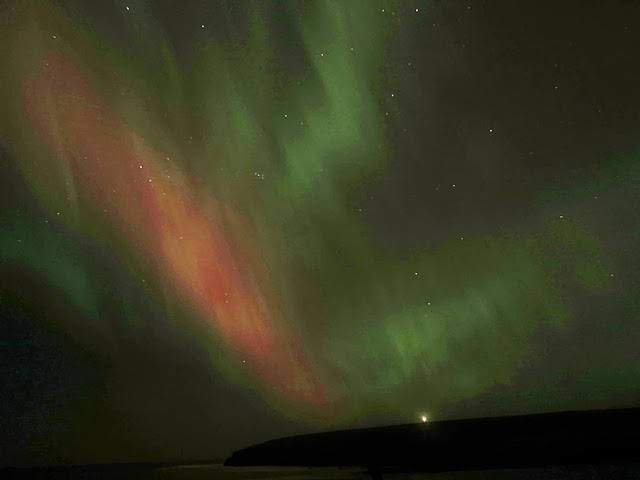 Aurora at Brough of Birsay, the bright light is the lighthouse... 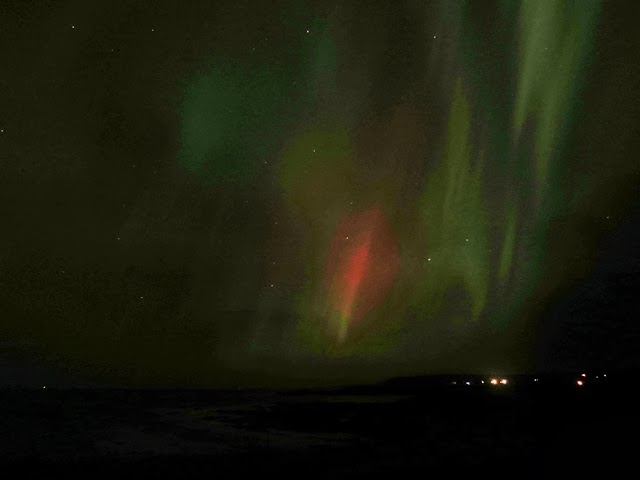 And looking the other way, towards Northside 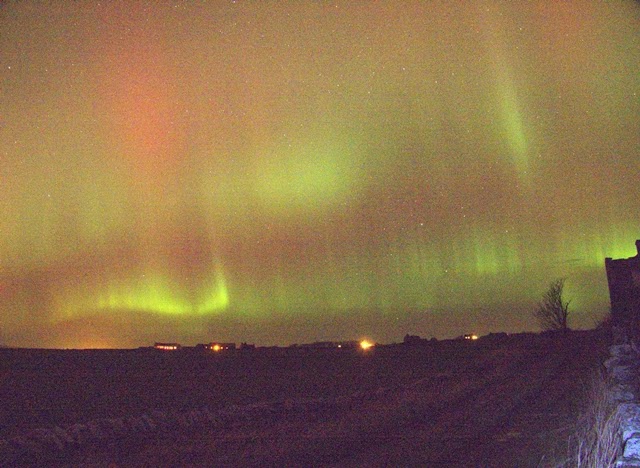 Aurora from our gate
Posted by Alastair at 12:14 am 3 comments:

Massive tramp around after the rain had stopped, this eventually involved going to the top of The Kame  in pursuit of hovering buzzards, which turned out to be Common. Other highlights were the first Lesser Black-backed Gull of the spring on Loch of Bosquoy, a female and two kit otters playing at Howaback, the flock of Skylarks still in the tup field and Skylarks and Ravens displaying on the moor. 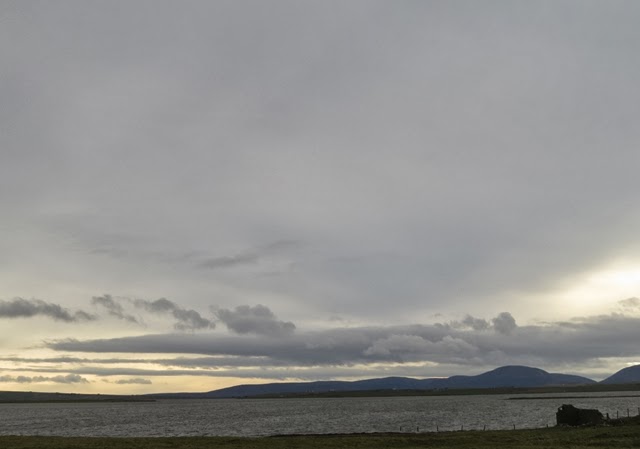 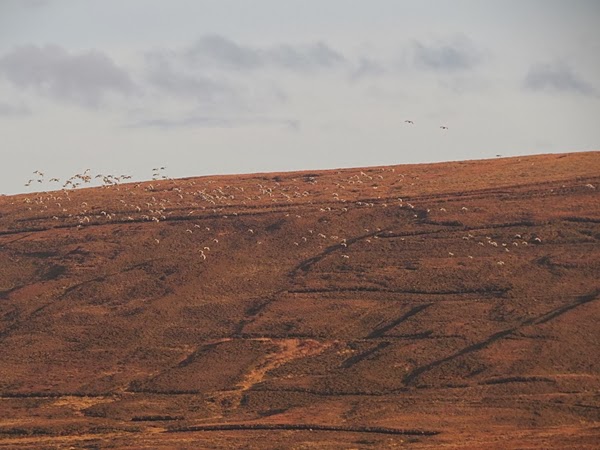 Pinks over the moor 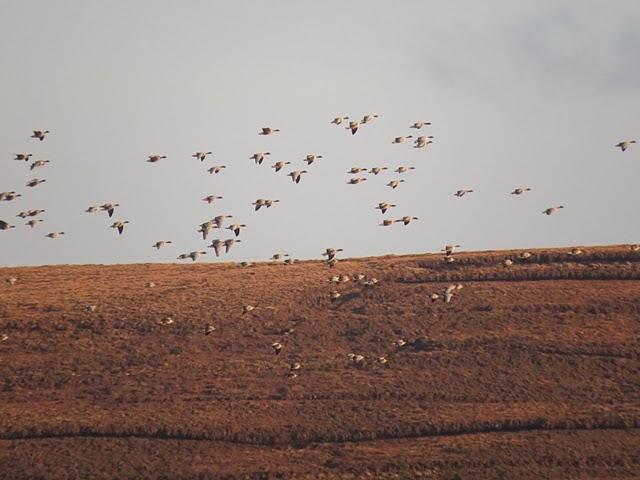 22 Woodpigeons on Thursday was a good total and there were three Collared Doves the same day. The Rooks are continuing to show lots of interest in the rookery, not roosting still but here early and late. 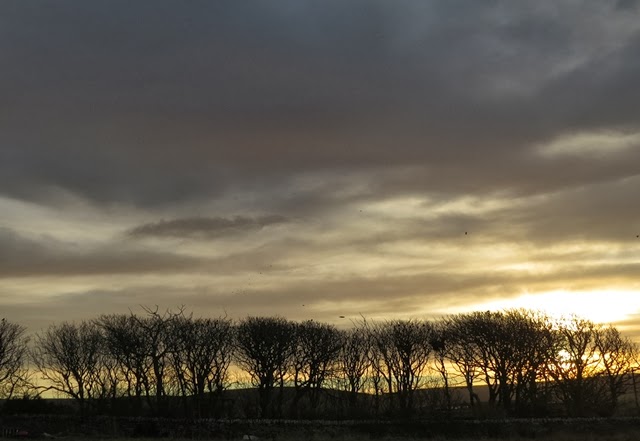 
Not much birding today but a Buzzard on the more and Skylarks now on territory were notable. Hen Harrier hunting just beyond the garden at lunchtime.
Posted by Alastair at 11:43 pm No comments:

Having completed most of my WeBS I went east on Friday afternoon for a poke around Tankerness. Dipped the Green-winged Teal but did manage to relocate Red-necked Grebe and Black-throated Diver. Counted 77 GNDs around the coast of Tankerness but Velvet Scoter were down to 26 and there were few Slav Grebes.

Weather yesterday and today a bit rubbish to be honest. New WeBS site today, Loch of Sabiston which held 66 Whooper Swans and 9 Shoveler amongst other things.
Posted by Alastair at 10:03 pm No comments:

Close to death yesterday but having got through the morning I started to perk up later on today. From nasty wet sleet driven on a strongish SW wind this morning to sunshine and calm later this afternoon. A pre-return to work walk the dog was called for.

A Hen Harrier, the second of the day, the first was just outside the kitchen window earlier this morning was a good start, but best was this character which sat nicely for the camera. 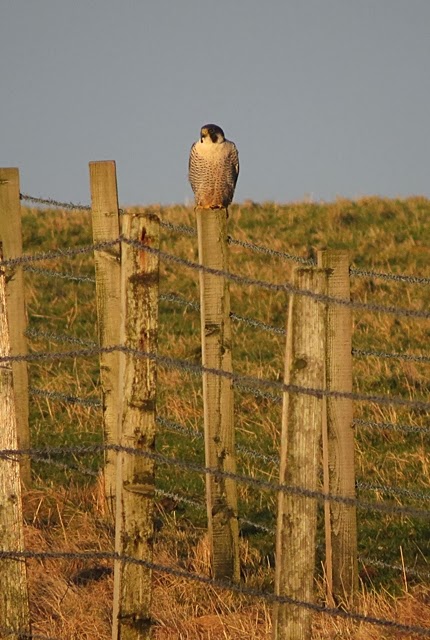 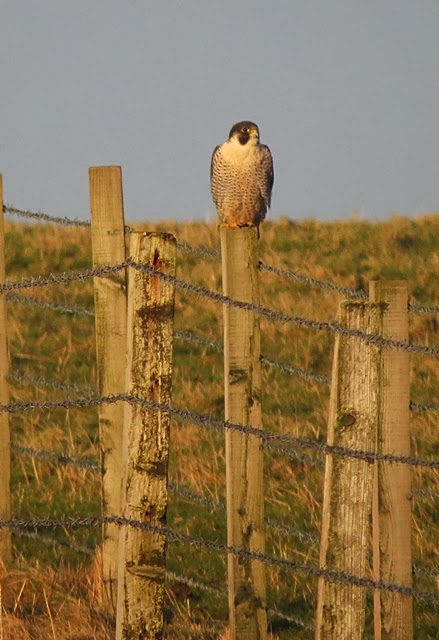 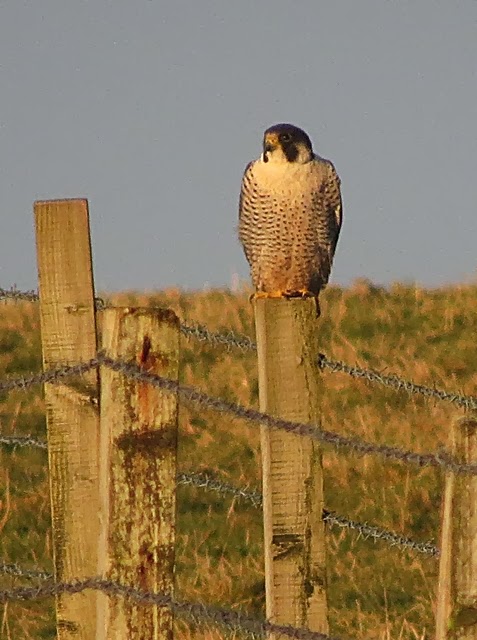 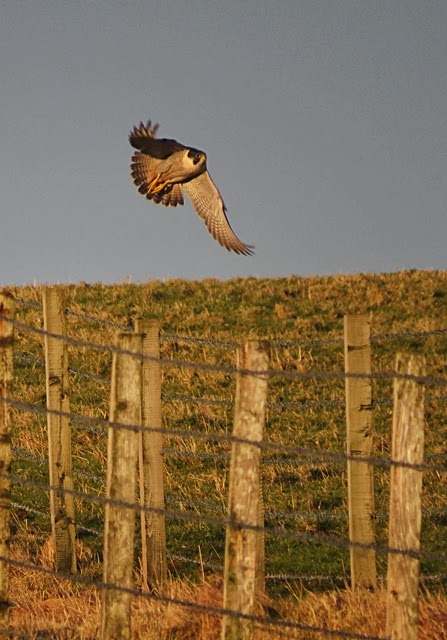 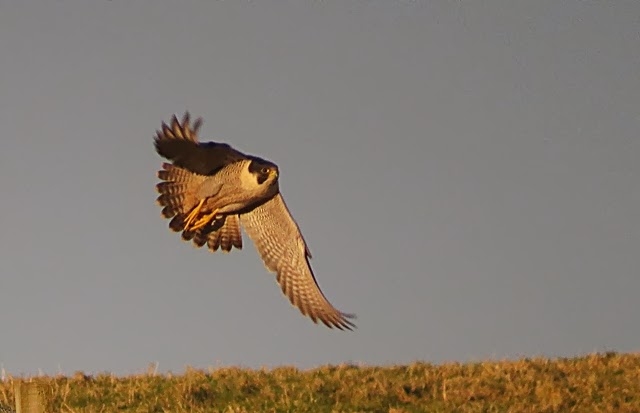 This is also quite a scarce winter bird, or at least hard to see. 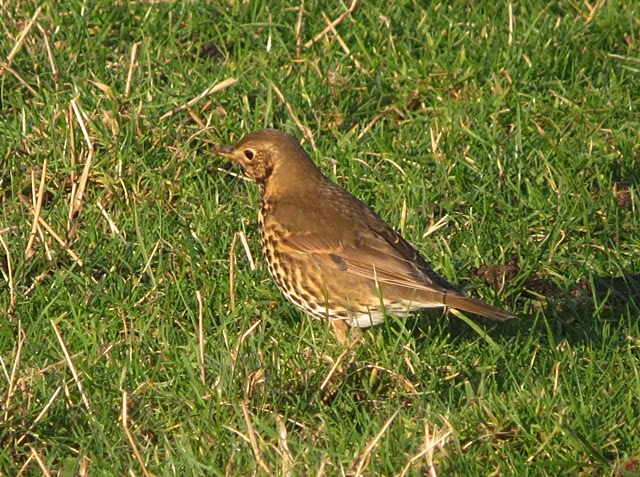 A bit further up the hill there was another Hen Harrier and 150 Pink-feet. Skylarks were heard overhead, so have returned to the breeding grounds. A single Meadow pipit was also in breeding habitat.

A large flock of Jackdaws (70) and Rooks (450) required scrutiny but they were  elusive and no monedula  could be picked out. 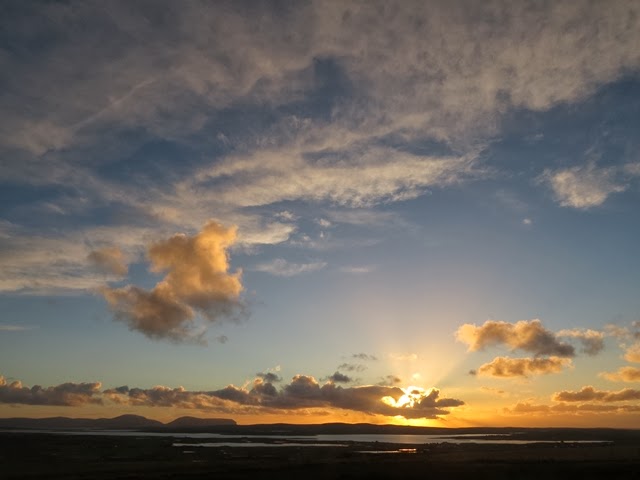 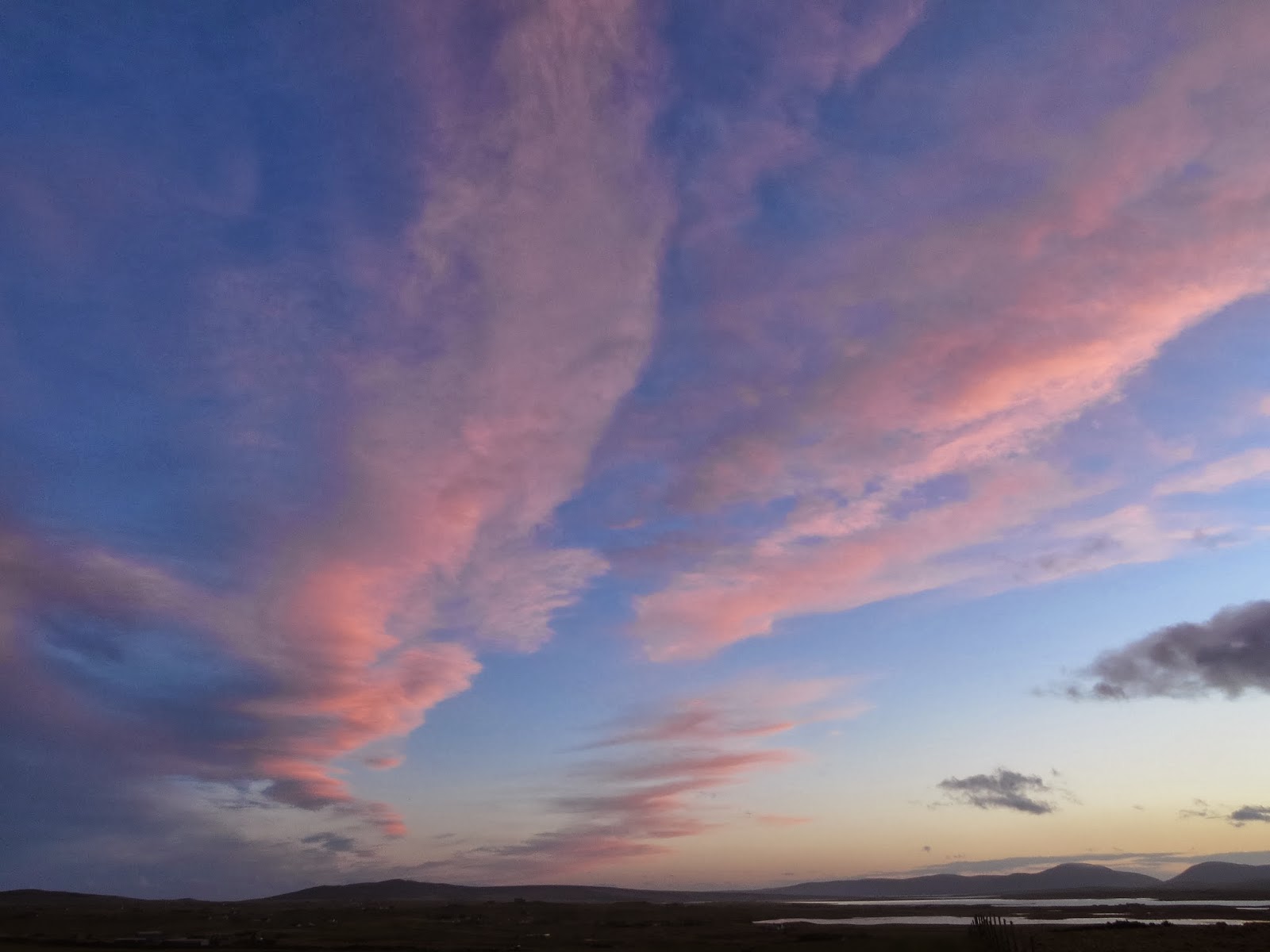 I don't believe I've ever seen such a Pochard flock. Loch of Bosquoy has held flocks of more than 800 in the past but this afternoon on the way to a fruitless search for the Bean Goose at Voy I came across a flock of 1470 in Rango Bay on Loch of Harray, that's a lot of Pochard.

The first Black-headed Gull of the year on the patch was nice, could have done with that a couple of weeks ago. Also a flock 35 Mepits by The Shunan was a surprise and late afternoon 34 Twite flew into the garden. The Oystercatchers have arrived in force with 70 on the fields after the first ones have been heard at night flying over mid-week, so noisy time returns. The Rooks were again showing some interest in the rookery but continue not to roost. And lastly three Robins feeding around the feeders on Saturday morning and singing on and off were a further sign that stuff is on the move. 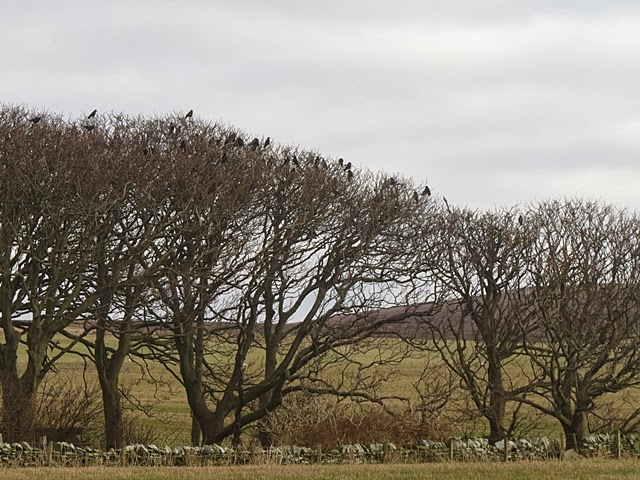 Dip of the week was the aurora on Friday which appeared after it clouded up by all reports.
Posted by Alastair at 10:07 pm No comments:

Close but no bananas....

In the end it was second place in the 1 mile FootIt challenge but all in all I thought a pretty good effort. Having had a target of 58 last year, based on the the two previous January efforts, and reaching 61 was I thought pretty good, so that was this year's target. I'd expected to get into the high 50s to be honest. The faithful Tree Sparrow having recently departed and various other species proving to be quite elusive in December. However, I had good weather at the beginning of the month when I was on holiday and on the whole the weekend weather was not too bad. There were sufficient calm days to be able to search the lochs for ducks and I got lucky a few times.

Star bird was of course the Blue-winged Teal, a really nice find, and my first "proper" find since the Red-rumped Swallow of October 2012. Also nice were Jack Snipe, in the past just a couple or so records, Woodcock, which can be very tricky, Red-throated Diver which was early and very distant on Loch of Harray, and of course Ellen's Waxwing which played ball (or at least ate apples) the following morn.

I will now be going back to watching my "proper" patch which no longer includes the northern sector, but does include the Howaback area of Loch of Harray with the water treatment works and burn. No doubt a fair bit of my birding will continue to be of a FootIt nature. I might even keep a FootIt year list.

This weekend it was back to the decorating, and to the coast. The Waxwing put in a brief appearance yesterday but today a more determined effort at Palace, in a bit of a blow, found both Glaucous Gull and Jack Snipe (I have a feeling that the Jack Snipe is a patch tick). 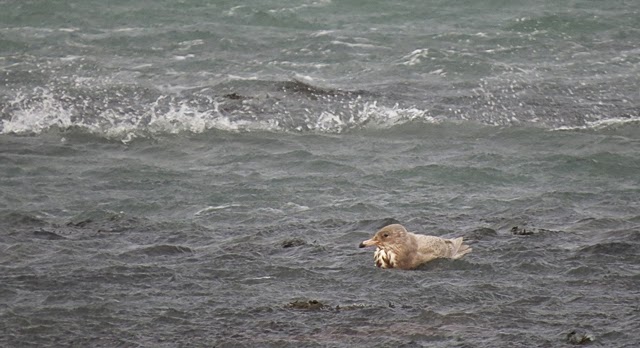 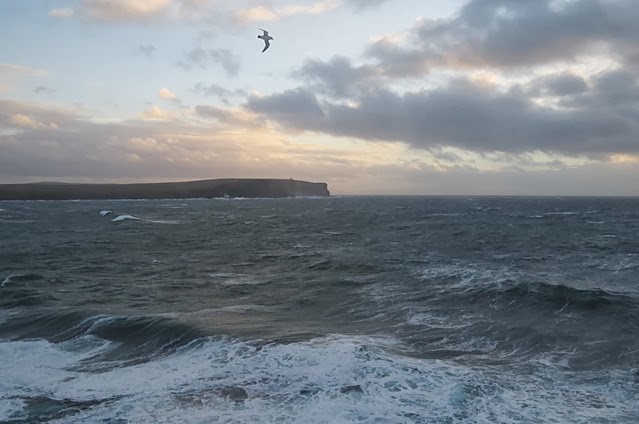 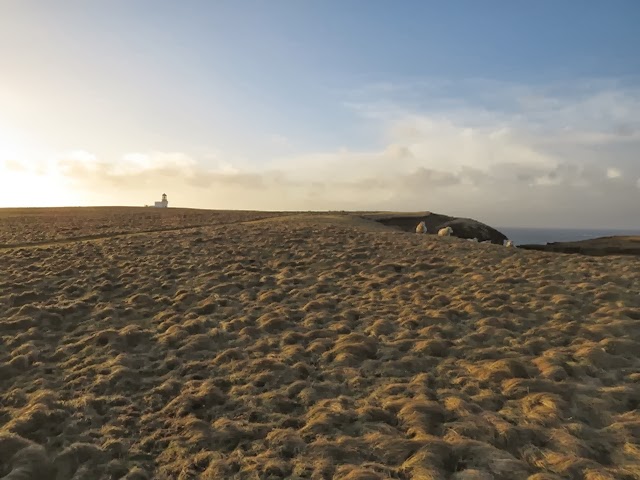 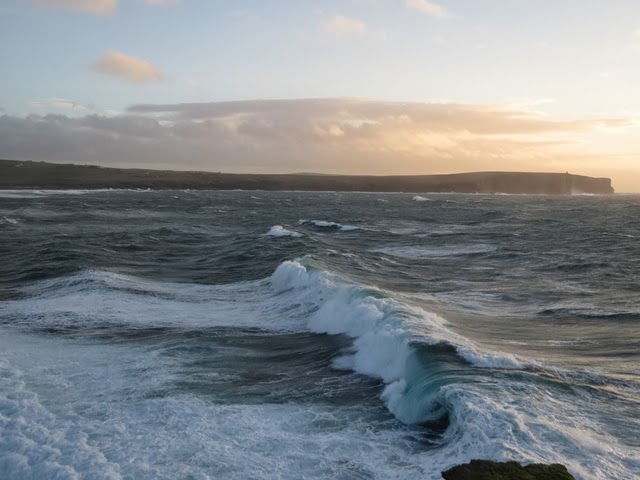 The Waxwing, presumably the same, reappeared briefly early afternoon but otherwise the garden was quiet. 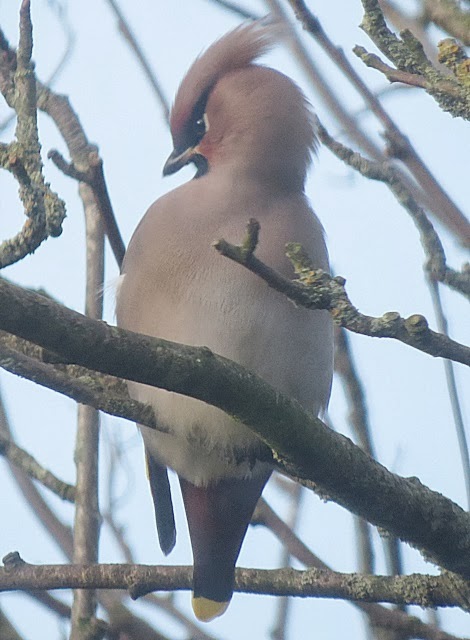 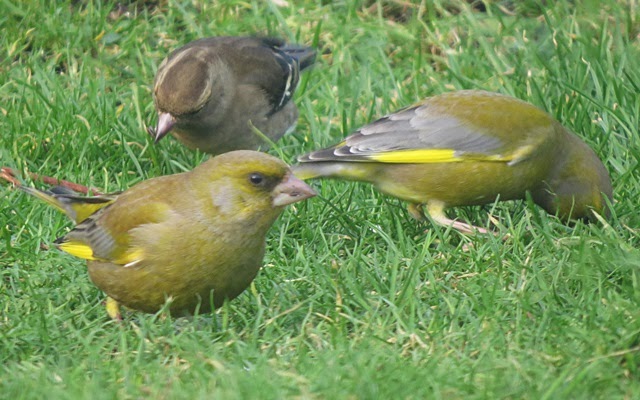 A brief walk at Palace was exceptional only for the waves. 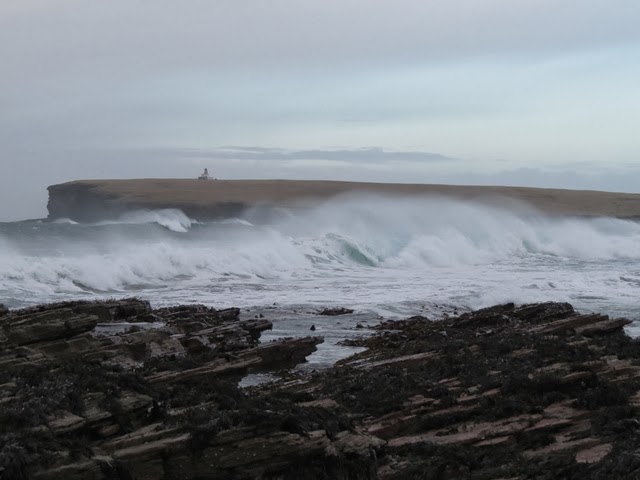 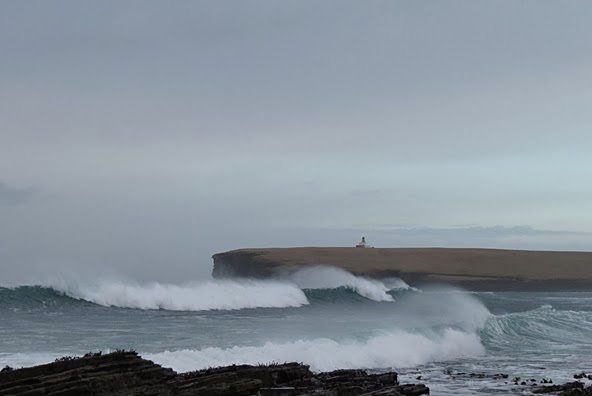 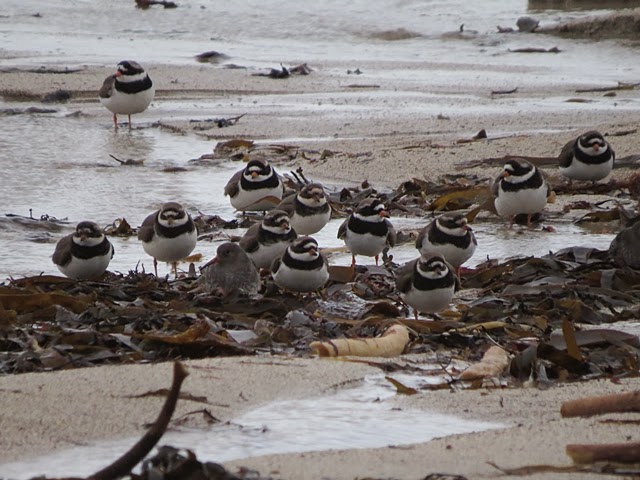 A look at the crow roost produced just 18 Hoodies but still 3 Carrion Crows and 2 hybrids. 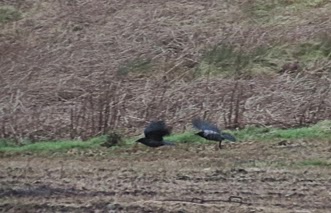 The large pale patch on the flank of the lead bird showed it to be a hybrid, although on the deck it had looked quite good for Carrion Crow. 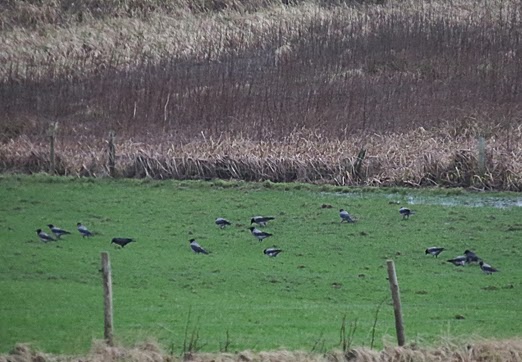 Pre-roost gathering
Posted by Alastair at 12:48 am No comments: