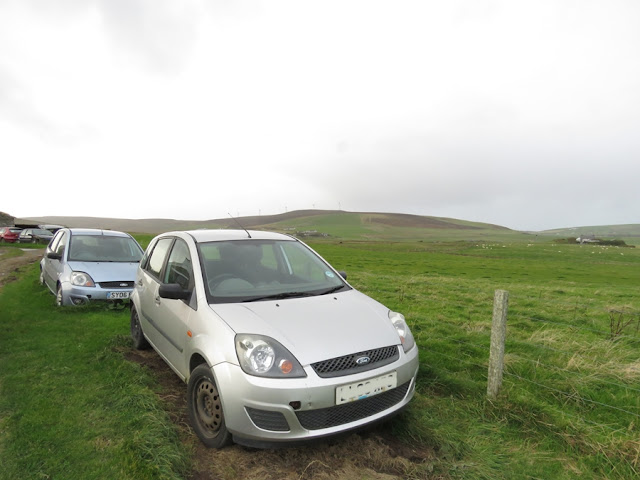 Nine years of good service 60,000+ miles (it had 20 or so thou on the clock when I got it) but a blown head gasket would seem to be the end. As can be seen it is in the Fiesta graveyard, there's a third one in the background. Maybe some parts will go on further journeys. It went up and down, or maybe down and up, to Yorkshire a few times - one memorable journey on a very rough Aberdeen crossing with a hamster, two goldfish and two cats, and there was still fresh water around the goldfish when we got here (one of those lasted until this year as well). It also spent the best part of eight years negotiating the track pretty much every day, sometimes three return journeys a day (out and back was a mile off-road), more miles off-road than 99% of 4WD vehicles. Hopefully the recipient will be able to salvage some bits and make one working Fiesta.

Whoa, that was a great gig, the business. I went along not expecting too much and was blown away, great guitar playing, great musicianship all around. If you can't get to see this band (next stop Germany, then Holland and back to Wales) the 2015 Cardiff gig is available as a DVD, 2x CD package. The stage is a bit small at the Town Hall and the guitar tech/stage manager was thankfully alert as Andy backed off to the edge during a brilliant Apache medley (not on the Cardiff set list). https://www.youtube.com/watch?time_continue=153&v=vgpMcLQE-cs

NC I would recommend this. I think you'll like it a lot more than the Richard Dawson I played you (which is still my album of the year....)

Bird stuff, a huge Redwing arrival which brought me a Mistle Thrush at Northside, a patch tick (that's the other patch at the seaside.) And just Redwings in their hundreds all around the house and The Shunan. No extras though. 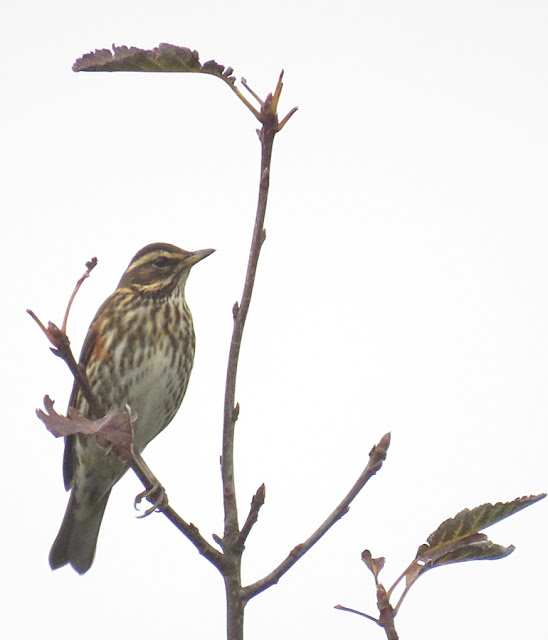 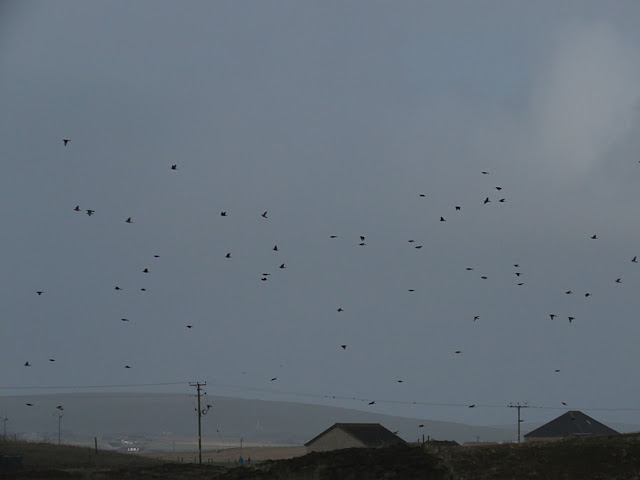 There were eight Brambling exhausted on the track and then two males around the feeders. 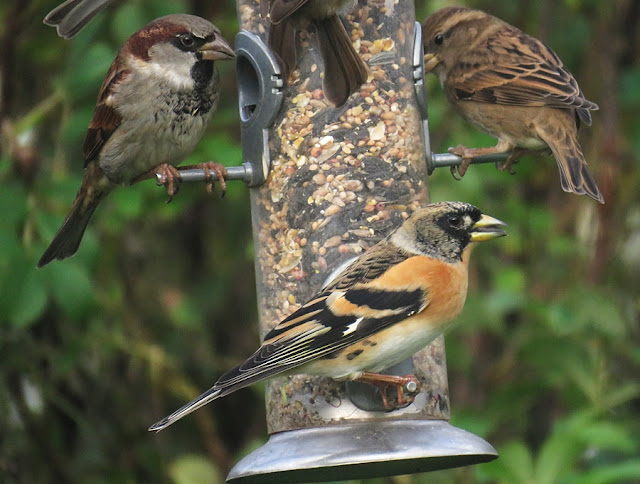 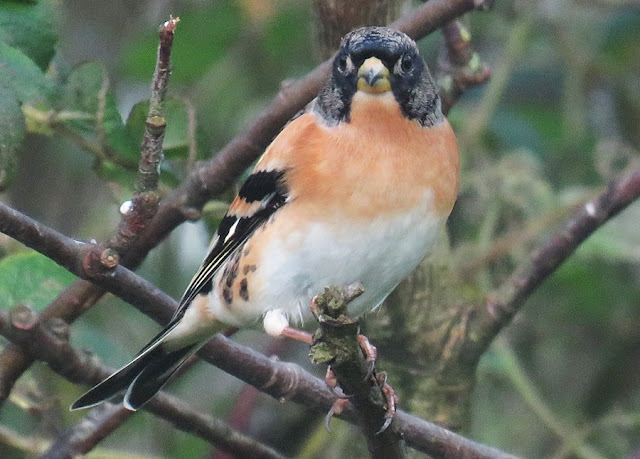 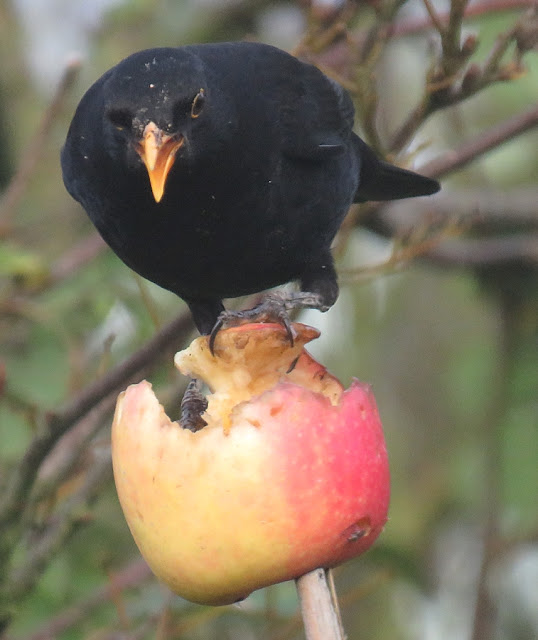 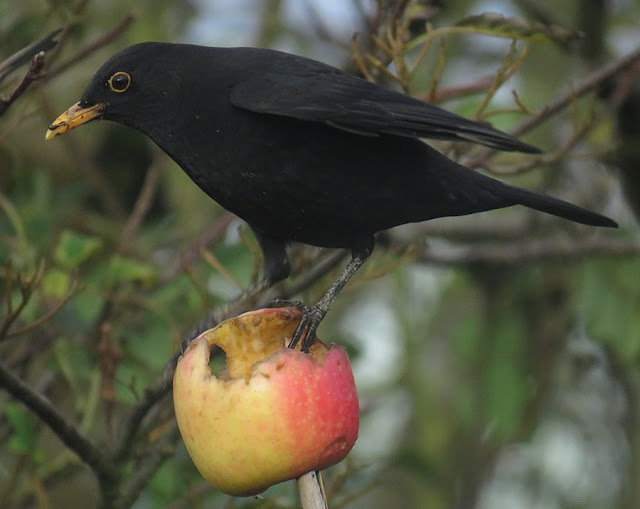 Lots of these around. 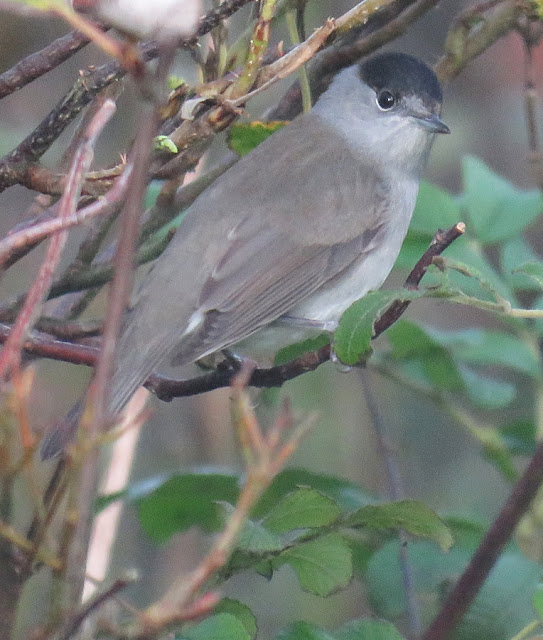 A couple of these too - Blackcap

Whoopers have clearly had a good year with lots of family parties, last year there were hardly any. The local pairs did not raise any young in contrast.

Frustratingly it keeps raining at night, often very heavily and I'm loath to put the traps out to get soaked, probably should risk it the next still evening.

Busy, busy trying to sort out the parking space, squeezing three vehicles and two trailers without risk of "the unfortunate reverse" as has occurred, oops. Elder daughter passed her test so a replacement for the Fiesta had to be found rather rapidly, bright red Corsa - watch out.

I'm still very interested in crows, and these two characters down at the end of the track posed nicely. 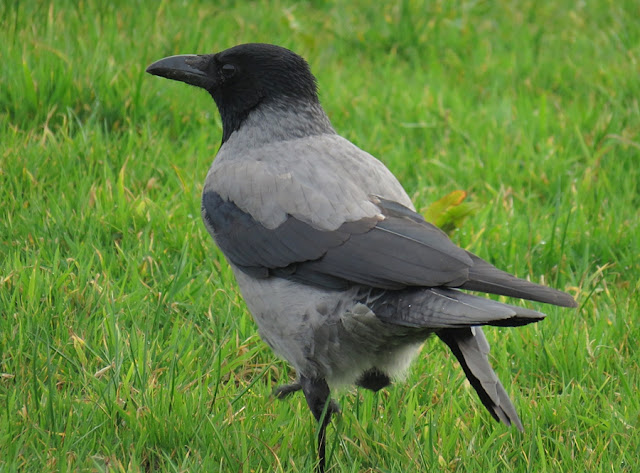 Hybrid crow, black feathers on the upper tail coverts and on the rear flanks, and dark feathers bleeding at the nape (juv Hoodie also has a vague demarcation between the black and the grey but that would have moulted out by now I think),  a subtle one. Lots of crows around here at the moment, mostly Hoodies. 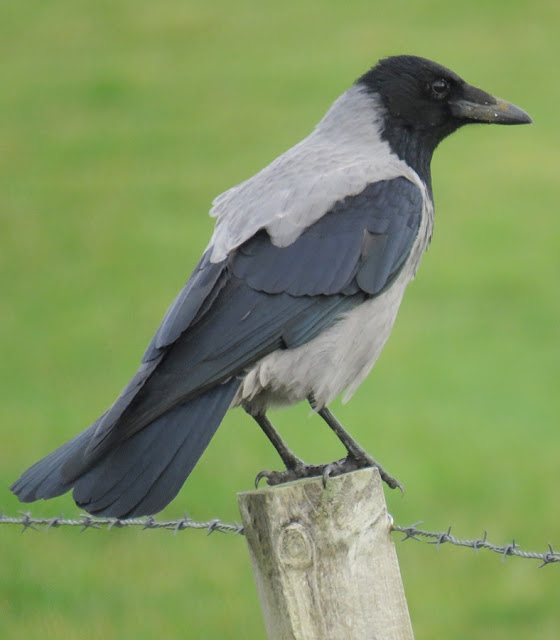 Hoodie, this one looks like a pure individual but I'm not sure it is possible
to be certain about any individual.

Last week was sunny, sometimes and windy sometimes, quelle surpris, we had to abandon one walk as there was every chance we would be blown into the fence and end up entangled. Lovely a day later up above Skaill Bay. 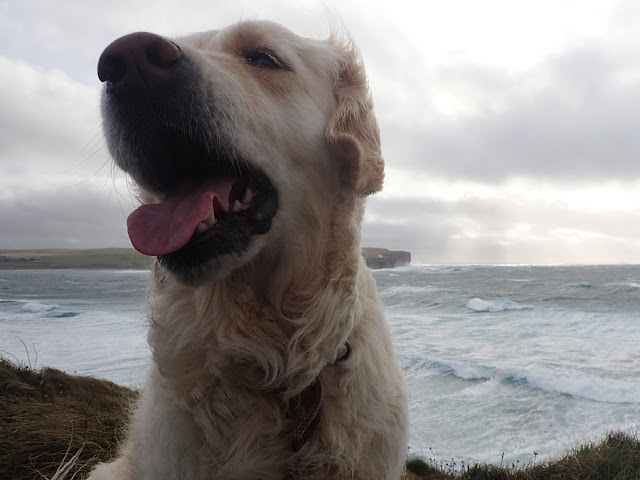 The hound quite likes the wind. 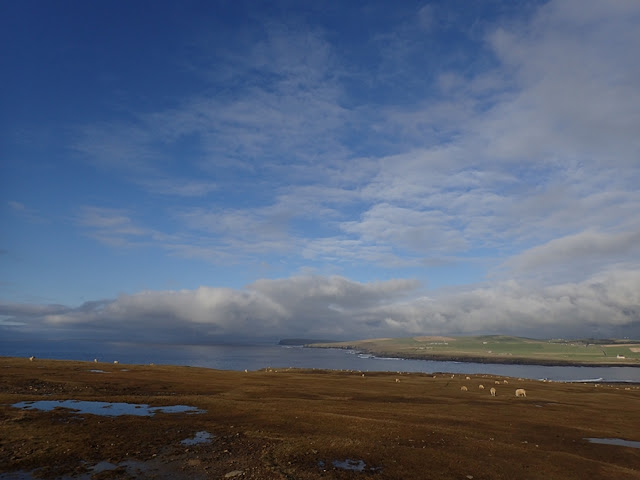 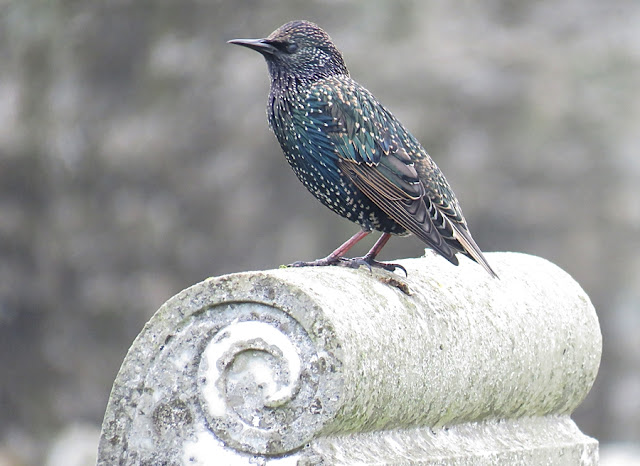 Snow Buntings were a nice treat at Birsay today. 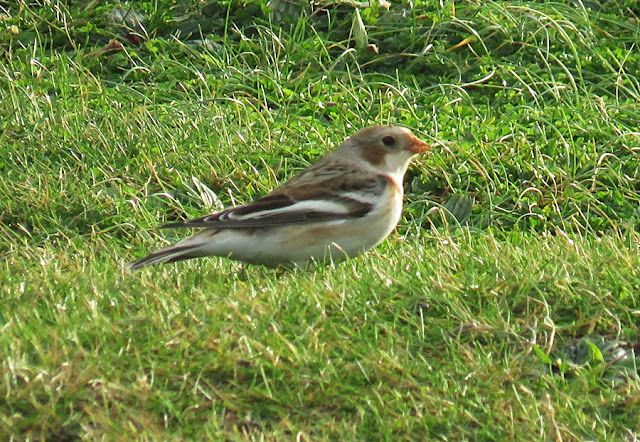 Slightly concerned about what I've let myself in for as I don't really do talks (I know, I know I can talk...) but hey-ho.

I'm sort of hoping that not too many people turn up and I can do it more like a "lesson", interactive and exploratory, but that may be tricky, we'll see. I went to the Otter talk the other evening by Anne Bignall and over sixty folk turned up. 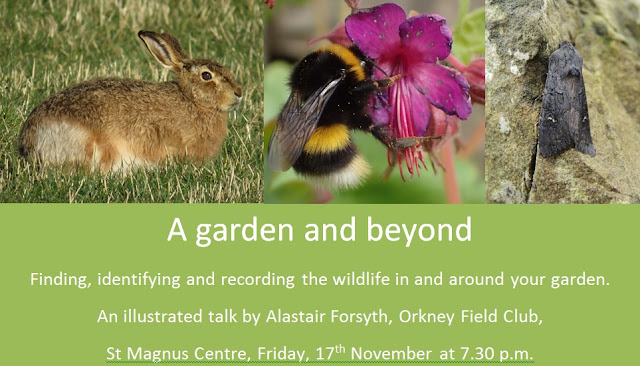 Three bird species on the islands today that would all be ticks. The Sibe Robin and Red-eyed Vireo were both announced at 5.30 p.m. too late in the day to get near either of them. Both turned up in mist nets as well so chances would be thin. However, the Parrot X-bills that were first found on Friday performed rather well and despite the awful light and drizzle, pix were obtained. I also heard the call and got a crappy recording of it - will post that later - the pix are pretty convincing any rate. 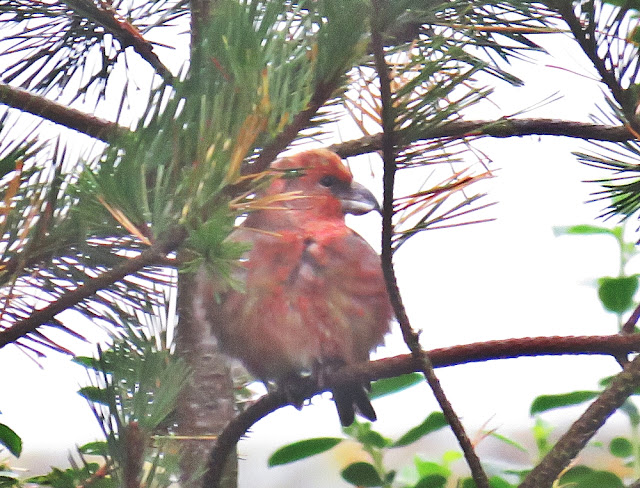 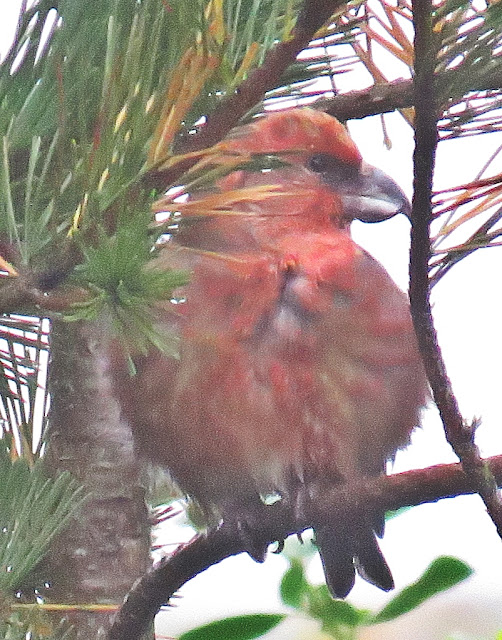 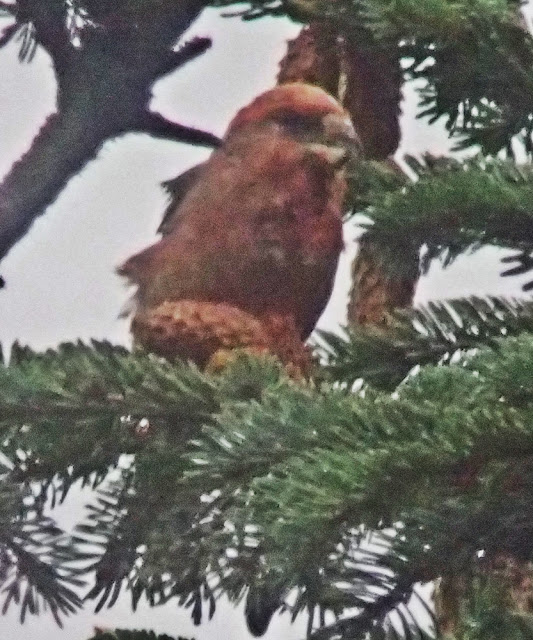 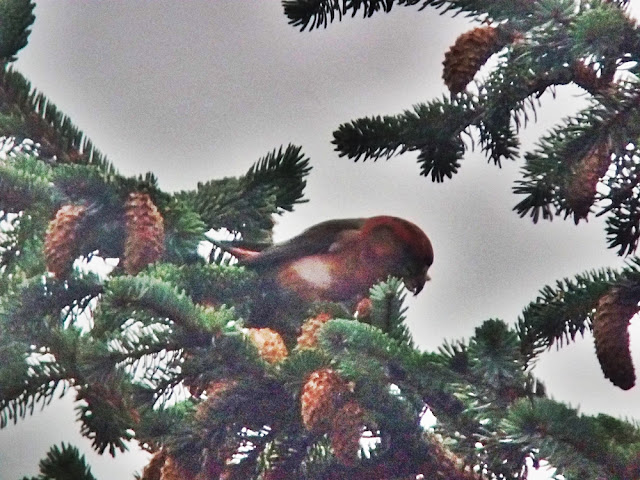 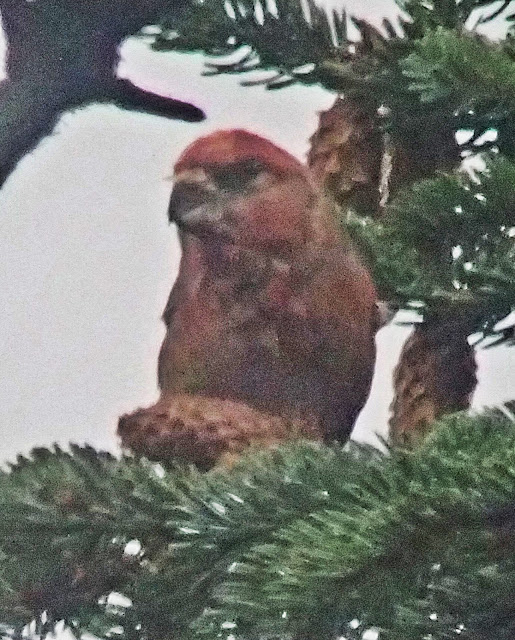 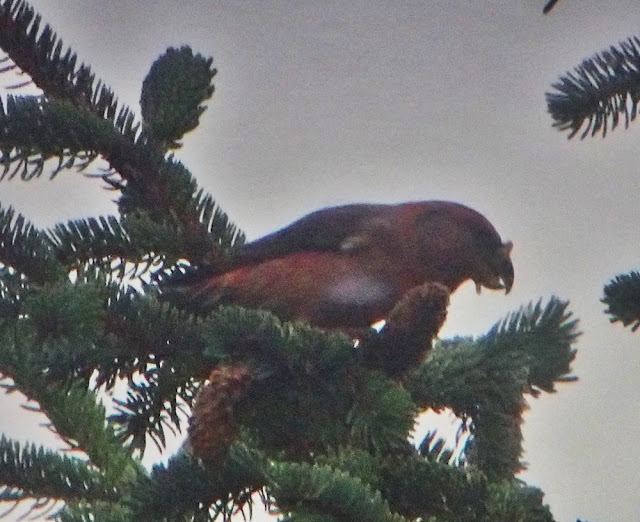 At about 11 or so the two males started calling and flew off, as they went they were joined by two other likely suspects.

Also around Finstown the first Redwings I've seen this autumn.

Younger daughter had successful pony eventing day on Saturday with piles of rosettes and a trophy. Elder daughter returned from Edinburgh from interesting university open day - and a serious amount of shopping.

On Friday there was a Carrion Crow in the back field. 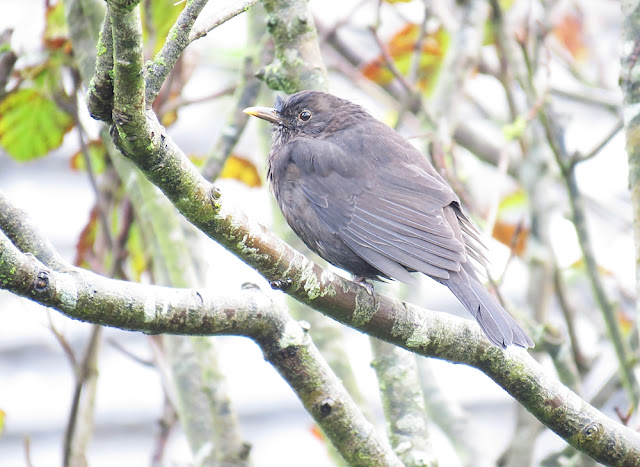 Blackbird
Posted by Alastair at 9:51 pm No comments: 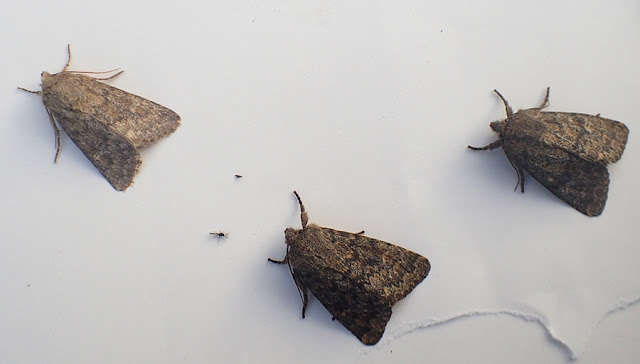 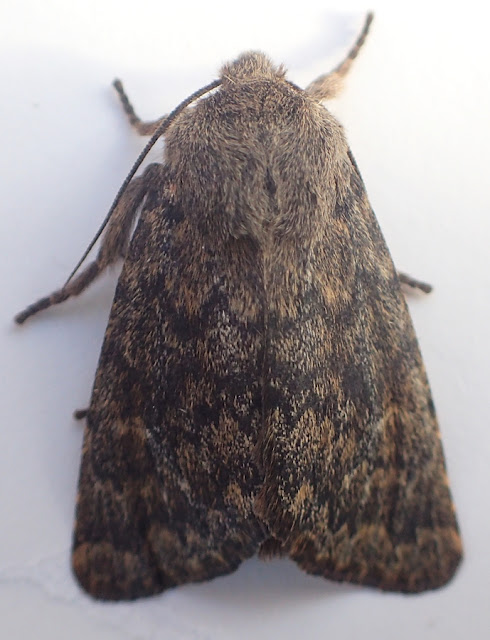 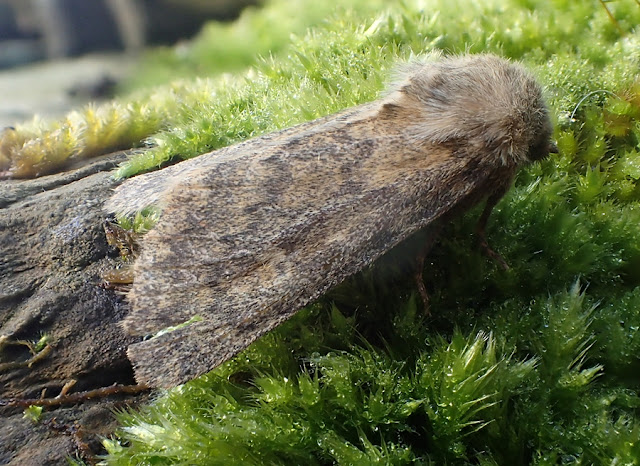 One of my favourite moths, Brindled Ochre. 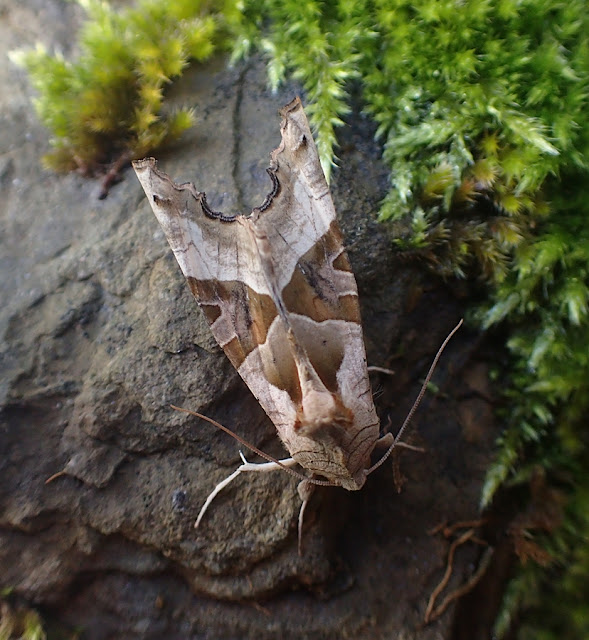 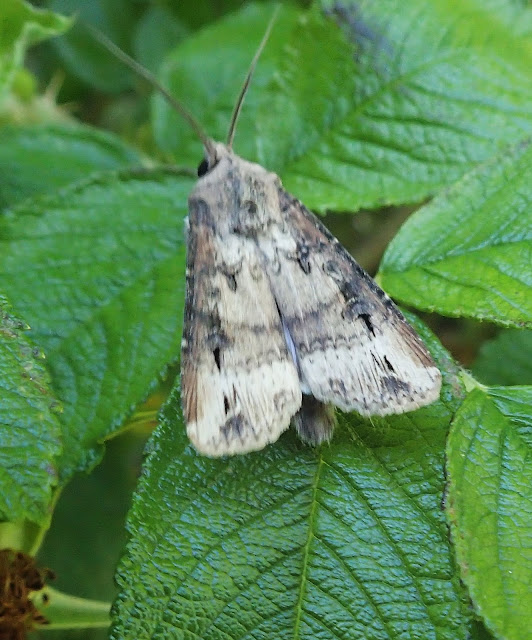 Mothing weather at last and the reward of five Brindled Ochre over the weekend, two Dark Sword-grass and a couple of Angle Shades and a Silver Y. Micros were represented by a pile of Parsnip, WSHM, a very worn Acleris and a Eudonia that escaped.

The first Blackcap of the autumn (of the year), a Chiff, a Ruff and a Blackwit. Three Little Stint were on the beach at The Links, but I didn't go there. Seawatching weather tomorrow but I'll be working.
Posted by Alastair at 11:24 pm 1 comment: