It's fairly ridiculous here, light enough outside to read a book without a torch, after midnight. As usual I find it a tough time of year whilst I'm still at work, a tendancy to stay up all night, what there is of it, the birds start againat about 02:30. Easy to get sleep deprived. Somehow I'm still catching moths, quite a few from the wee Heath trap down at Wee Wood on Friday night. Included several new for the year, star turn though was this Small Angleshades. Not sure if I've found that here before. 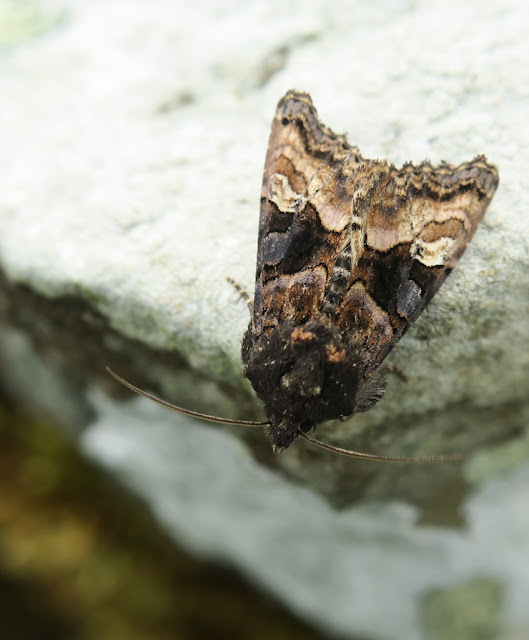 Small Angleshades.
I kind of get in a groove, especially on a Sunday night with the Freak Zone followed by Culture Clash, Stuart McConie and Don Letts' programmes on 6Music. I'm then inclined to just carry on going through photographs and trying to identify things, not go bed.
Spent the rainy day trying to identify the caddisflies that were in the traps, again mostly from the Wee Wood, it took a lot of doing to get one to family, one to a species pair and one to a probable identification. I have some gen dets to do to nail these to species, need to give it a go.

Phyrganea, probably bipunctata but grandis is a possibility.
One trap on now, some Ghosts leking, really must go to bed....
Posted by Alastair at 11:55 pm

Would love to experience that length of day at some point. Although still not bad in Cambridge at this time of year, it does at least get fully dark for a few hours.

It does drive you a bit nuts as you can likely tell.