A brief history of the Rook in Orkney


Rooks are today a familiar sight and sound within the landscape of Mainland Orkney. It has not always been so and it is likely that this species is a quite recent coloniser of our islands due to its observed preference for tall trees in which to nest and its close association with human agricultural activity (Balmer et al 2013). In Scotland, Scots Pine Pinus sylvestris, is the most frequently used tree for nesting (Forrester and Andrews 2007) but in Orkney it is Sycamore Acer pseudoplatanus that is favoured (pers obs), and all the major rookeries in the county are established in trees of this species. 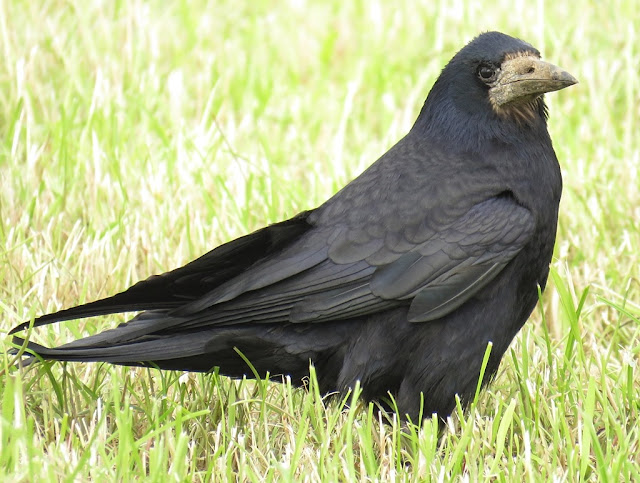 Corvids, similar to the crows we are familiar with today, probably evolved about 17 million years ago. The pre-historic record of Rook is confused as the species is difficult to separate from Carrion Crow and other congeners unless the skull is available. Typically information from the Pleistocene in the UK involves single bones found in caves (Harrison 1987). In Orkney the early Holocene was characterised by the retreat of the ice which most likely departed Orkney 16,000 years ago (www.landforms.eu). Once the ice had gone the vegetation of the islands rapidly established itself and the transition from grassland to woodland began to take place in the warming climate. Between 8 – 9,000 years ago woodland began to expand across the county and this vegetation type remained dominant in the West Mainland until 5,600 years ago (Bunting www.landforms.eu). The woodland community was mainly Hazel Corylus avellana, Birch Betula and Willow Salix and possibly Alder Alnus glutinosa at wetland edges, however evidence for the presence of Oak Quercus and Scots Pine Pinus sylvestris are within the pollen record (Bunting www.landforms.eu). The decline of woodland coincided with human agricultural activity and the cooling of the climate, and in this period it is possible that Rook was present as the mix of woodland and human agricultural activity would have created the preferred conditions for the species where it is found in most abundance today. This is pure conjecture, and there is currently no evidence that Rooks were present in Orkney at this time. Within a relatively short time the “woodland period” passed and with the trees eliminated the islands, devoid of suitable nest sites, became an unsuitable habitat for Rook.


In Scotland, Rook was believed to be historically common but it declined during the 18th century (Forrester and Andrews 2007). The Rev George Low in his A Tour Through the Islands of Orkney and Shetland 1774 stated that “Rook was of doubtful occurrence”. Rook was recorded as “Never seen on any of the islands” by Salmon in 1831. The first evidence of Rook occurring in Orkney is found in the Vertebrate Fauna of Orkney (Buckley Thomas E, John Alexander, Douglas D, A, 1891). This publication records “a small flock near Papdale in 1846”.  By 1878 the same reference records “about 30 nests near Muddiesdale.” These dates correspond closely to the timing of the establishment of Sycamore Acer pseudoplatanus in the county, a tree species that was perhaps only successfully introduced into the UK in the 1760s. Indeed there was no Gaelic name for Sycamore until 1772, suggesting it was not well known in Scotland prior to that date and it is known that the tree was not extensively planted in the country until the later part of the 19th century(M. Palmer www mikepalmer.co.uk). It would seem that, increased agricultural activity by humans, and the availability of suitable nesting sites in Sycamore, along with another warming of climate in the later years of the 19th century, combined at this time to make Orkney suitable for colonisation by Rook.


David Lack was present in Orkney between March and August 1941 as part of his National Service and during this time he visited as many of the islands as he could and recorded the birds he found, his findings were published in Ibis in two parts, in October 1942 and January 1943 (Lack D. 1942 and 1943). On Mainland Lack found Rook breeding at Berstane, St Ola, a few nests in Kirkwall and a few other small colonies. On Hoy he found a colony in Sycamore near Orgil but none at Melsetter where a colony had apparently existed in the past. One pair was nesting at St Margaret’s Hope, South Ronaldsay. Lack did visit Rousay but found no breeding Rooks there. Rooks were seen on Shapinsay but there were no breeding pairs on that island. Unfortunately Lack does not record the number of nests he found at any of the sites bar St Margaret’s Hope.


In more recent times there have been a number of surveys of the rookeries of Orkney. The last survey of Orkney rookeries by E.R. Meek and R.J. Simpson took place in 2010. The rookeries had previously been surveyed irregularly, see Table 1, and it seemed timely to repeat the work. Field work was conducted during April and May, with the majority of counts taking place in the last two weeks of April. The results are shown in Table 1 below which includes the counts from the previous five surveys.


The total of 1,475 nests in 2017 is a decrease on the 2010 total by 9.6%. The decrease since the peak count of 1,898 in 1996 is 22.3%. These decreases should be seen in the context of the increase between 1975 and 2017 of 498 nests or 52.0%. Between 1975 and 1996 there was a national and UK increase in the number of Rooks of about 40% (Marchant and Gregory 1999), the increase in Orkney within this period was 98%. There is evidence of a small decline across the UK in the decade to 2011 (Balmer et al 2013) so it is not unexpected to find that decline reflected in Orkney. Elsewhere in Scotland changes in agricultural practice have resulted in significant changes to the Rook population. There is little evidence of any wide-scale persecution of Rook in Orkney which has demonstrably had an impact on breeding numbers elsewhere (McGhee H. 2000). Continuing to survey rookeries throughout the county on an occasional basis in order to monitor the number of breeding pairs would be a worthwhile activity. Relating fluctuations in breeding Rook numbers to any changes in agricultural practice could prove to be of particular interest.


My thanks to the various landowners who permitted access for the survey counts to take place.


A number of observers contributed to the survey counts and I am particularly grateful to Dawson Shearer who counted in Kirkwall town. Malcolm Russell and Helen Crabtree also contributed counts to this survey. Other advice and observations came from Alan Leitch, Christine Hall, Brian Ribbands, Tim Dean and Ian Cunningham.