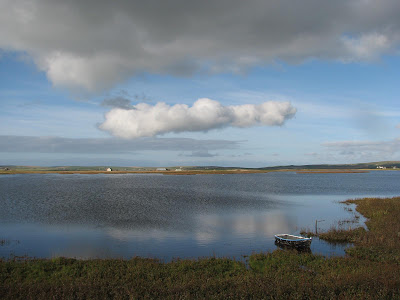 An unstreaked Accro in a garden by the loch caused excitement this morn. Unfortunately no amount of pishing and ticking would get it to show itself again, I was fairly sure it was a Reed Warbler. 170 Pochard on the loch was a good number. 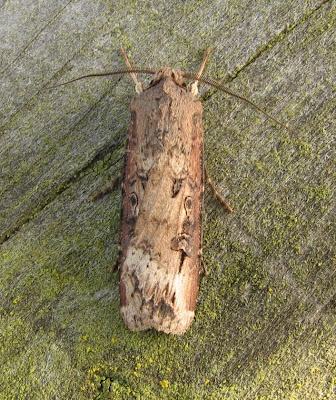 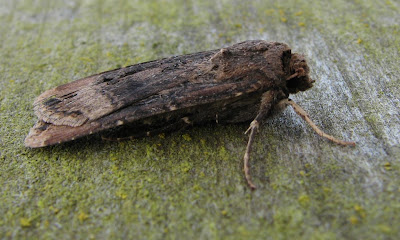 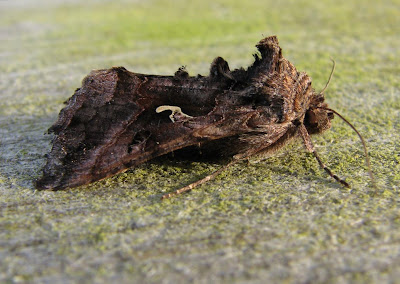 A fresh Beautiful Golden-Y presumably from a late brood Or not so, a Silver-Y actually

Moth numbers in the trap are now low but good quality with two Dark-Sword Grass of the 12 moths caught.

In the afternoon we went to South Ronaldsay to look for the Buff-breasted Sand as I wanted to have some views in good light. Despite four hours of searching it couldn't be found. A large Ruff and a very small reeve were no compensation. There were about 1500 Golden Plover in the flock and only one likely suspect for an interesting cousin but only its head seen and not relocated. There were 14 Purple Sands on the beach.

Most interesting was a Stoat, not supposed to occur here, but there have been rumours recently and Mollie (who found it) Louise and I had excellent views from a few feet away. Unfortunately I failed to press the shutter at the correct moment.
Posted by Alastair at 9:38 pm 4 comments: 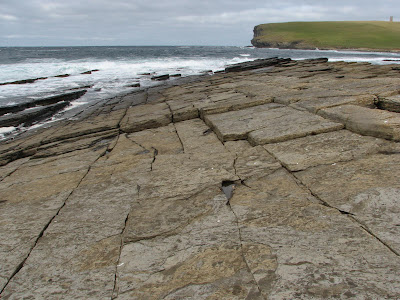 A brief seawatch yesterday (Saturday) produced nothing despite a fresh northerly. 12 Laps on the Birsay Links, a Barwit and, year tick of the day, Sandwich Tern at Evie. There was a Robin in the garden and in the evening four Blackwits went north-west and a female Merlin hunted around the house causing general panic amongst the few remaining Swallows.
Posted by Alastair at 9:32 pm No comments:

It's all at The Coop now

The last time I saw a Buff-breased Sand was on a Northumberland beach some 22 or 23 years ago. Yesterday's was a bit hard to see and I only just got there before the light made viewing impossible and the bird (presumably) went to sleep. Whilst it was active it was like a little hunchbacked, clockwork toy let loose amongst the snoozing Goldies, quite a revelation. Thanks for that one PH.

On the way there I snaffled the Coop's current special offer (Pec Sand) - note to the manager please can we have something more petite from America next week; American, feeding in the mud and yellow legs are good, just quite a bit smaller.

I can't remember when I last saw two species of American wader (shorebird) in a day (that's excepting when I went to California) maybe I've never done that in UK before. 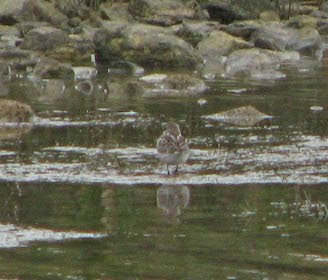 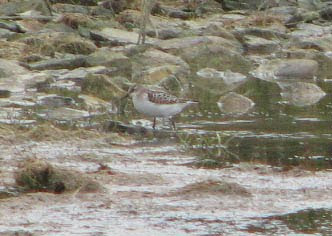 Popped along to Loch of Skaill after work. There are still two Little Stints there and a Greenshank. 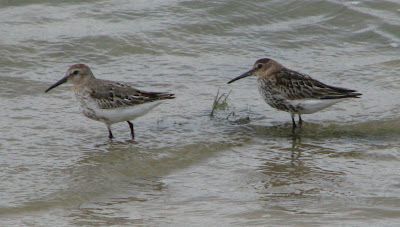 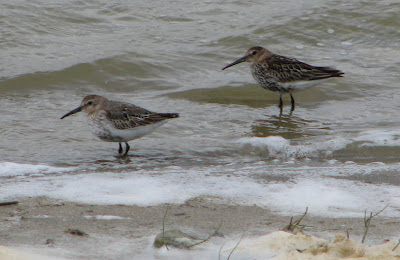 I thought these Dunlin were quite interesting. I reckon the darker bird is unusual looking with a very long bill and extensive very dark blotching on the breast sides and onto the belly. Aging the bird as an adult (the other one is an adult too) I had a look at BWP to see if the American races are distinguishable at this time of year but it was difficult to unpick the information and Prater and Marchant indicated that hudsonia has only faint breast streaking, this bird has heavy breast streaking so I guess these birds are both alpina, the bills do look especially long though.

There were plenty of duck on Skaill with a good few Goldeneye present.

Back home there were two Song Thrushes in the garden first thing indicating a bit of movement going on, The Shunan still has too much water in it though.
Posted by Alastair at 10:43 pm No comments:

This birding lark is tricky (Pt 2)

Went to Deerness yesterday for a brief wander. Looked for passerines but my favourite two places produced just a Garden Warbler, along with Robin and 2 Chaffinch so went to the Point of Ayre car park to look for waders. I was very short of time so when I quickly located a lone plover down on the mud I rushed it a bit, that's my excuse anyway. Mmmm golden spangles on the tertials but looks much like a Grey Plover, bill quite long, eye quite large; now what's this? The primaries extend well beyond the tertials and are longer than the tail tip. I was getting quite excited, American GP is a species I've not been able to properly claim as a find. In the back of my mind I wasn't quite happy though, no supercilium and when the bird flew the auxilliaries looked black (that's not right they should be grey). I was puzzled, the bird had looked fairly small, the gold on the tertials surely rules out Grey Plover also? I lost the bird but eventually it flew past me going back towards the car park, the underwing was white and the auxilliaries were definitely black, then as it was well past it showed a whitish rump band, anyway the wing beat was far too slow, it was obviously a biggish wader. It had to be Grey Plover, what about those golden spangles then. A feature of juvenile Grey Plover that I'd not noted before, well it's a species I've seen very few of in recent years and I can't really remember having decent views of juveniles .... ever. You wouldn't logically expect Grey Plover to have golden spangles on the tertials in juvenile plumage would you? I remember a story about a very well known rare finder being ridiculed for this mistake in the past, I wonder if those taking the p knew of this feature?

Not having much luck finding passerines in our garden or our neighbour's trees. However, there was a Robin in our big Sycamore this morning and later on a Chaffinch dropped in from a great height. Down at Birsay this morning though it was a passerine bonanza with no fewer than 5 Willow Warblers around the Palace gardens. 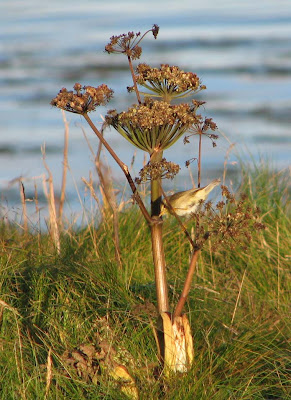 It was The Links that provided the real entertainment of the morning with a smart male Snow Bunting and no fewer than 53 Lapland Buntings. 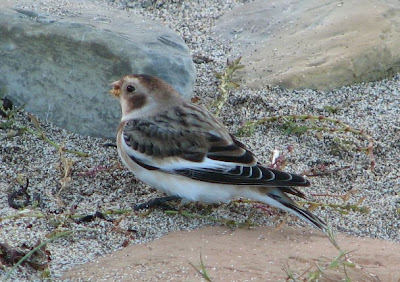 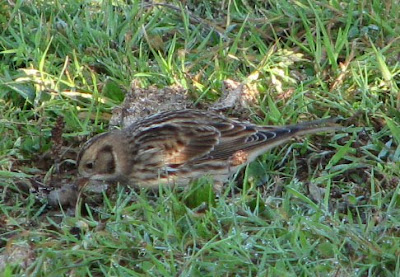 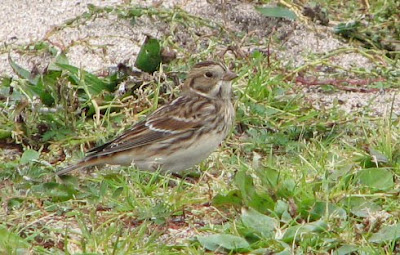 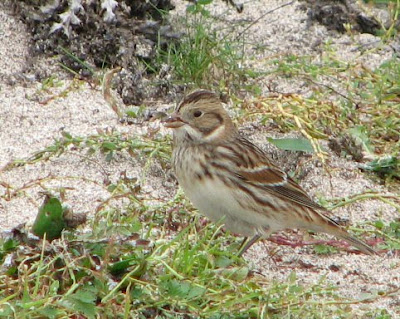 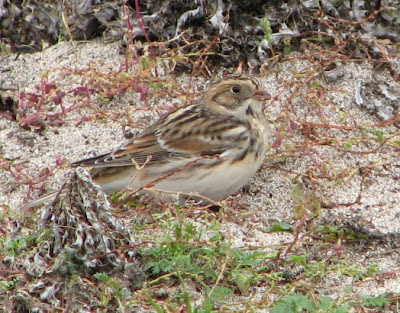 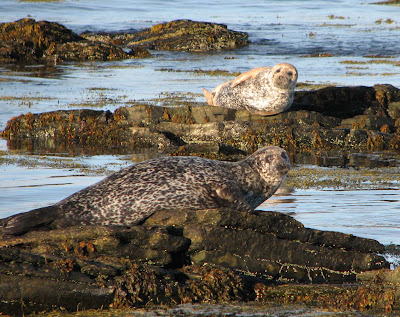 Curious
Posted by Alastair at 9:41 pm No comments:

The level of The Shunan has increased rather dramatically, not much good for waders anymore, jolly for ducks mind.

A few migrants around as I cycled up the hill this evening, a very bright green Phyllosc flew out of the ditch and into the small Sycamore wood by the bends, kind of suspect a Wood Warbler. Two Wheatear were on the track and eventually ended up in the garden as they flew step by step up the track in their Wheaterish way.
Posted by Alastair at 9:49 pm No comments:

This birding lark is tricky

Yesterday ended with inconclusive, although extended, views of a small Calidris on The Shunan. At the moment I'm favouring Baird's Sand ... but it could just be a weird Dunlin. We'll see what the morrow brings.

Also today, a new Wood Sand very briefly on The Shunan, 11 Lapland Buntings seen wonderfully well on The Links, Birsay and a Redstart at Palace. 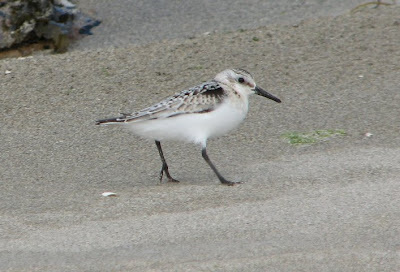 There were a couple of these on Birsay beach along with the Dunlin (25), Ringed Plover, Redshank and Turnstone

On the moth front Setaceous Hebrew Character was new.
Posted by Alastair at 12:00 am 2 comments:

Four Laps on the Brough of Birsay earlyish. Back down by Palace stores there was a Willow Warbler in the garden (2nd in two days as there had been one at work on Friday). Got home in time for the freshly baked bread to appear promptly from the oven too.

Earlier a male Hen Harrier had hunted through the garden, just outside the bedroom window.

Mooched about for a bit and sent Gary (Bicycling Birder) on his way for a few days then gave the garden the once over for .... a blank.

Local gen indicated some Curlew Sands not too far away, but dipped. However, the possibility of Common Cranes at Outertown was confirmed by some excellent views enjoyed by all (+a passing colleague). N.B. there's a bit of sensitivity about this area so please view only from the road or (very good) the beach car park. 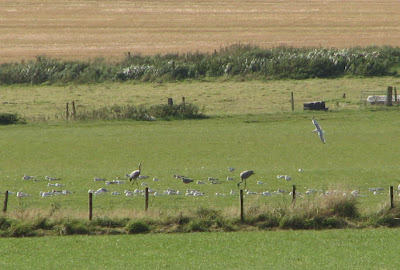 Common Cranes
The Shunan had been sadly neglected all day, partly because of the wind. However, got the family to drop me off there on the way home and gave it a proper grilling. A Blackwit was good. Some Goldies dropped in and when they left two other waders flew with them. Initially I thought these were a Dunlin and a stint but when they landed distantly I realised it was a Dunlin and something a bit bigger. Light was grim but it looked like a Pec. Waders flew again and landed on the hard to see near shore. Viewed from the gate opposite the open field gate though a nice bit of mud is visible and eventually 3 Dunlin and 2 Pec Sands revealed themselves and showed pretty well. Nice one.
Posted by Alastair at 10:06 pm 5 comments: