And it kicked off, after days of high winds, with a brief lull. Traps out, the Wee Wood being the current hot spot, and a new moth for me (I think a lifer), Marbled Coronet. Common enough but we seem not to have crossed paths previously. Eighteen moth species in the trap plus a pile of other stuff that I'm working through.

There were two very late Hebrew Character, a Dark Sword-grass and a very nice Grey Dagger.

There's a bit of an issue over Grey Dagger here in Orkney as apparently there are two records, as unlikely as it may seem, of Dark Dagger. I don't know the circumstances of these records, but they don't appear to be accepted nationally, they're not on the list here - https://www.eastscotland-butterflies.org.uk/mothflighttimes.html There is a record in the NBN (and another for Scotland). Anyway, as I've found Grey Dagger cats right by where the trap was set it would seem to me safe enough to presume Grey Dagger, I'm certainly not killing it and dissecting the bits out, I think it's a still a tricky determination even doing that.

Care is needed with this micro, and I think in the past I've not checked carefully enough that these are not something else, this one is good.

I forgot to post the lovely Grass Rivulet that I caught the other day. Common enough across the way at Ring of Brodgar, but I rarely see them here. This one was very well marked.

Keeping up with my record keeping and identification is tough. I'm trying to keep a running record of finds on Flickr but I'm struggling to keep that up to date, and I'm behind with iRecord, this is like a full-time job. And I have house stuff to do, like decorating, progress with our boiler room/back kitchen is sloooooowwww.

I found a nice Staphy in the pony's water the other day, it might be a second record for Scotland, unfortunately a female Philonthus, so no distinctive aedegus with which to nail the ID. I'll stick it on iRecord anyway. 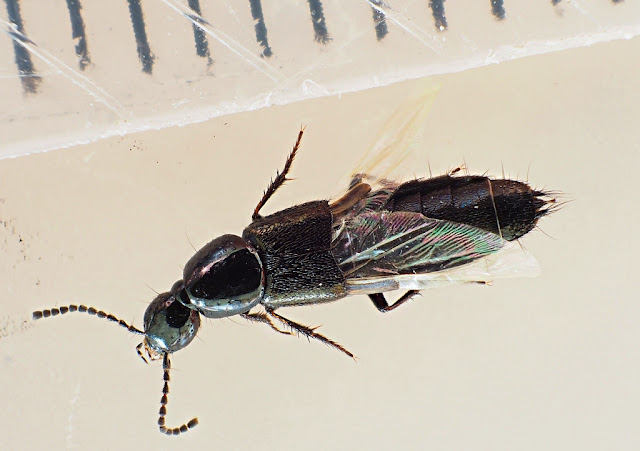 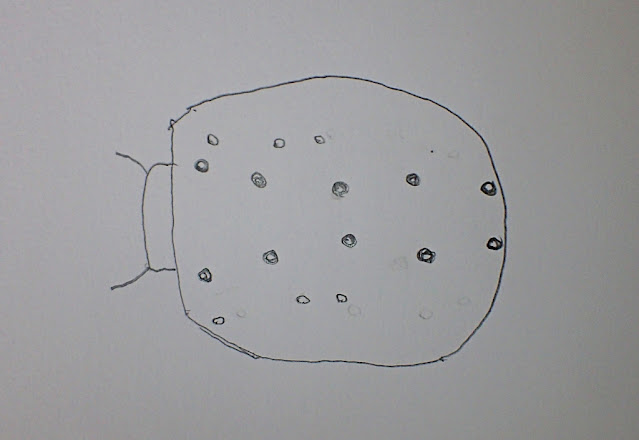 A puzzle resolved, this is a male Phryganea grandis. It looks quite different from the well marked females, and is a bit smaller too. 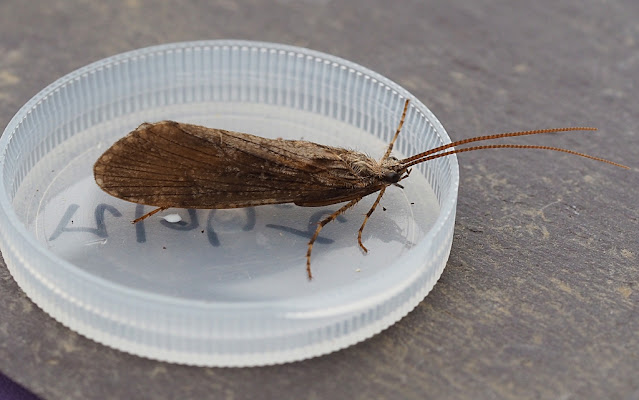 With these larger caddis it is possible to examine the genitalia, photograph to confirm the ID and release.

I put a black washing up bowl out with a drop of water in it; yes, BH managed to find one in K2. A very effective beetle trap. In amongst the many Helophorus grandis were a few interesting things to work through. There was also this suicidal cranefly, perhaps it was this that had laid these egg strings.

Ah, lost the egg photos, I'll have to find them and add them later.