I've re-read the BB paper (Stoddart, Dec 2013), thanks for reminding me about that one Barrie. I've also re-read Lee Evans paper http://www.gloucestershirewildlifetrust.co.uk/sites/default/files/The-Separation-Of-Lesser-%26-Mealy-Redpolls.pdf   . As Stoddard suggests redpoll taxonomy and identification is in a bit of a state of flux. 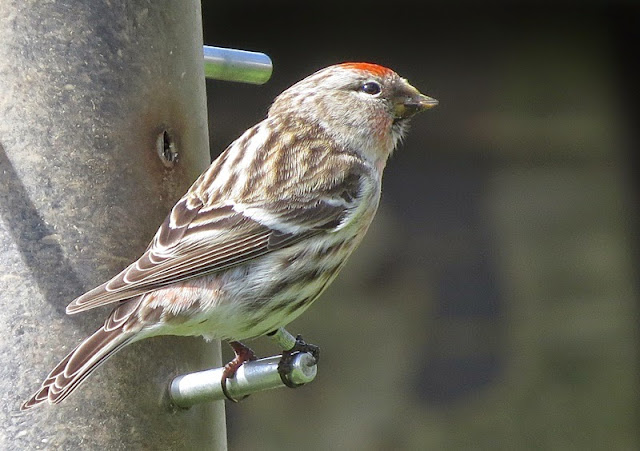 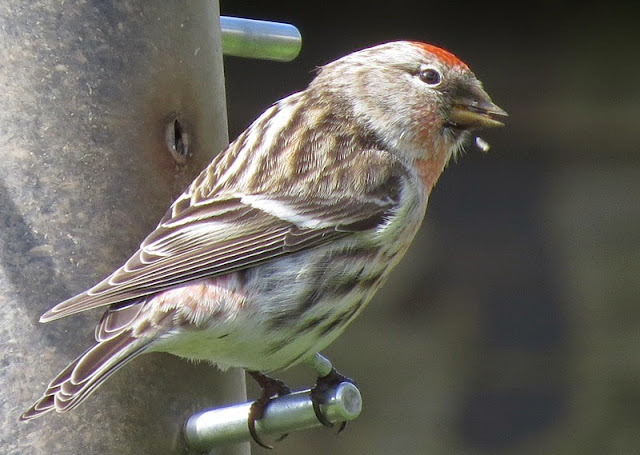 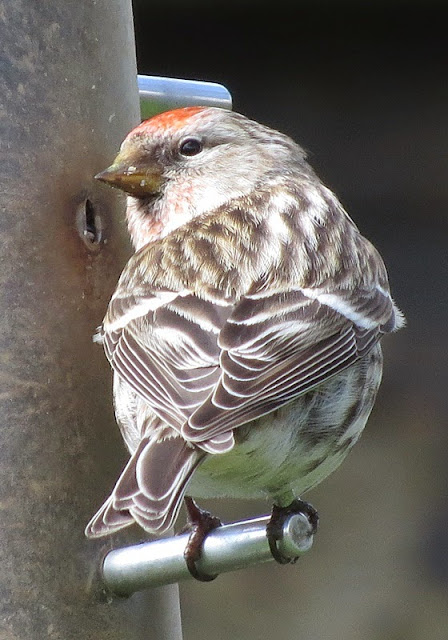 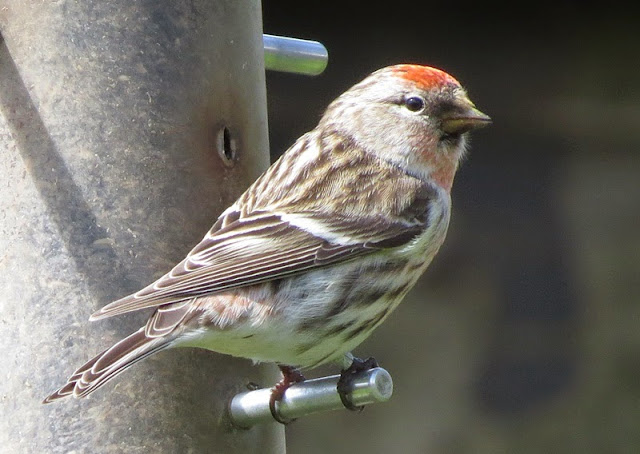 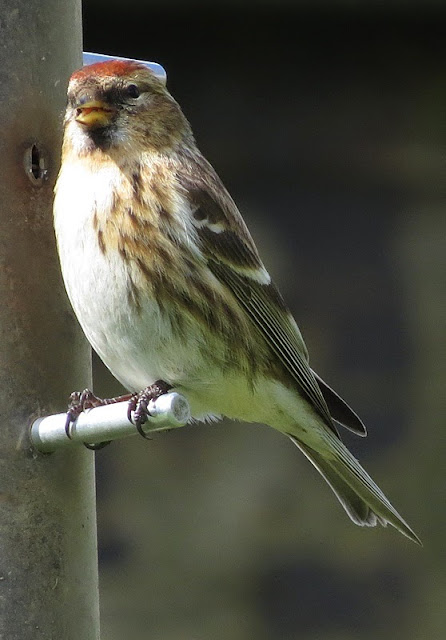 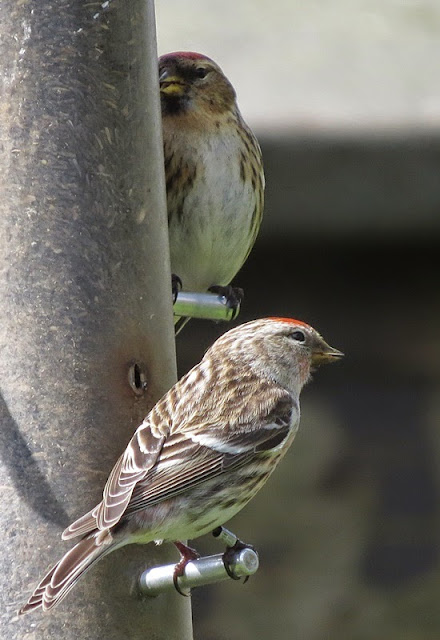 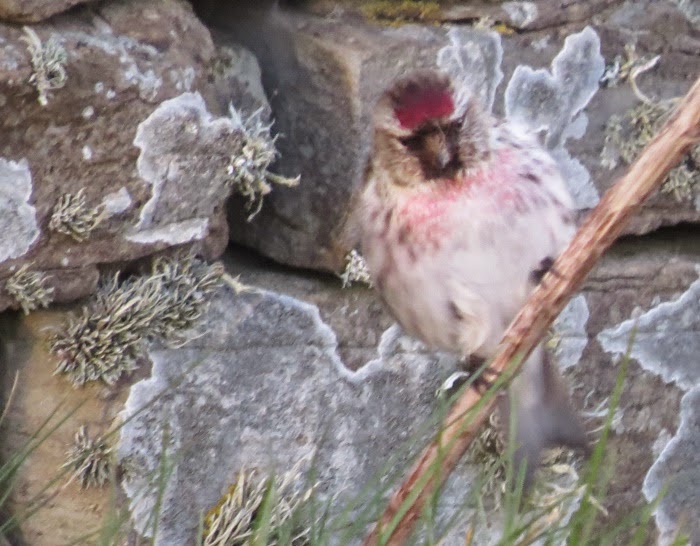 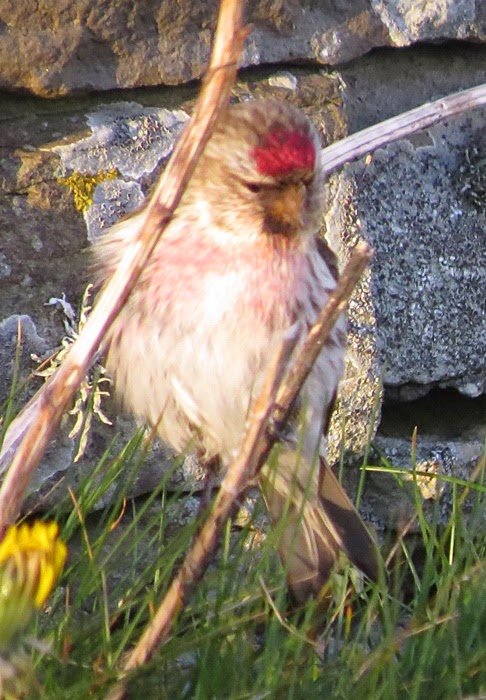 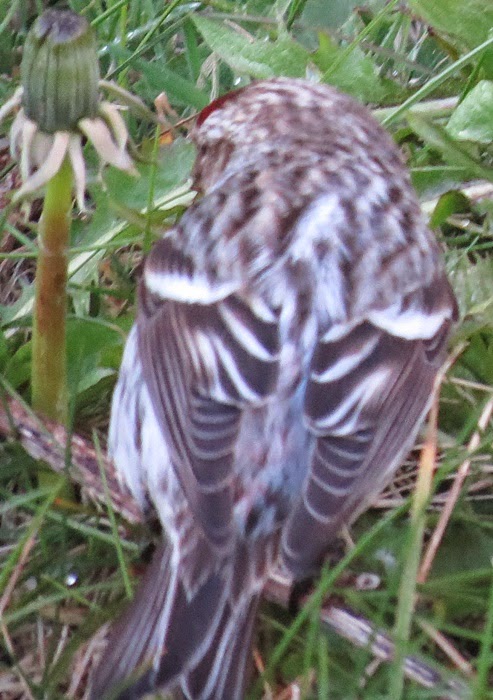 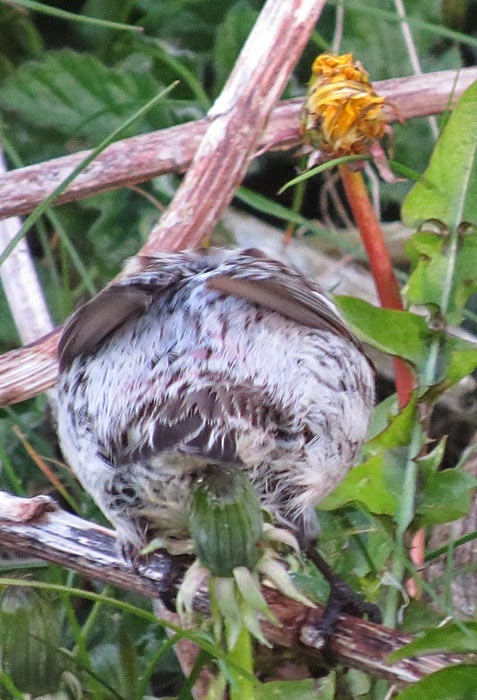 Here's the first one from 26th April. 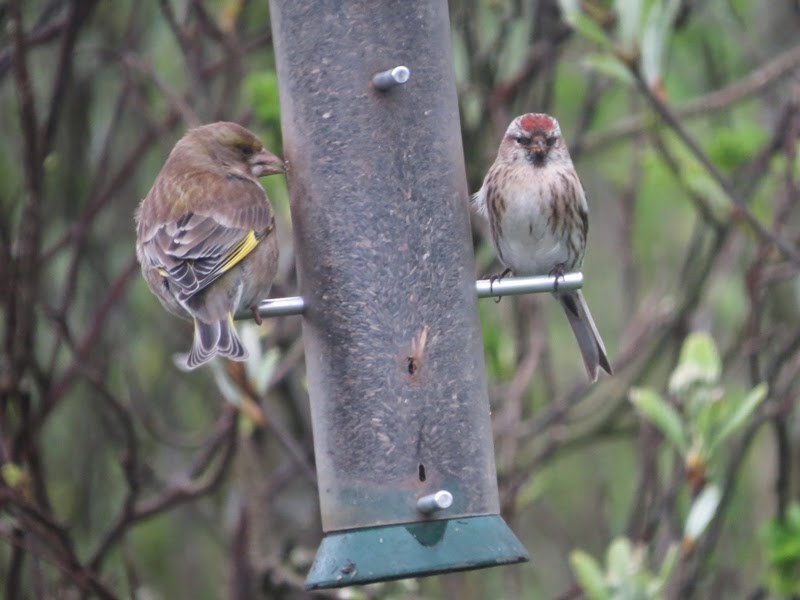 I think this is cabaret. Small size, really rather tiny when compared with the Greenfinch. Strong, dense flank streaking to the flanks behind the legs. 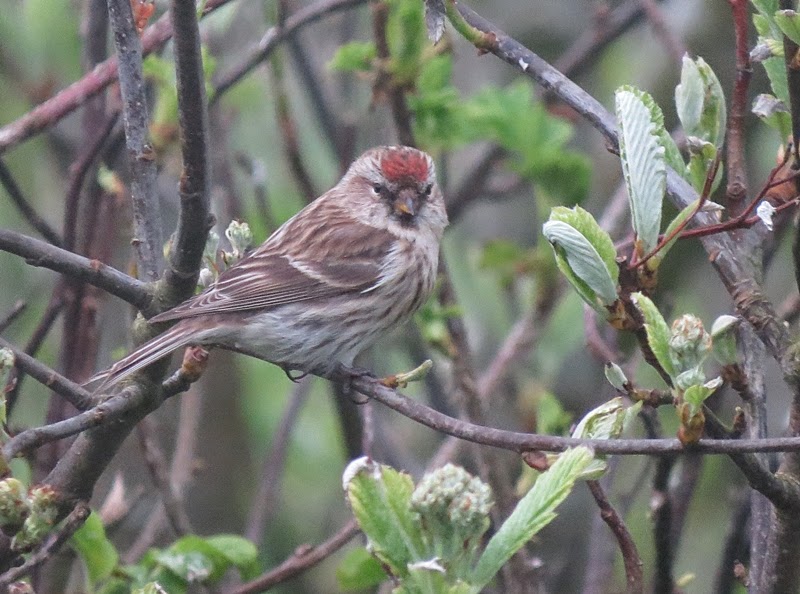 Generally brown plumage tones, buff greater covert bar, relatively dumpy looking shape, short tailed. This bird did not readily show its rump, so that feature was not well seen, but in this picture the upper tail coverts look rusty brown, there's no hint of white and it would be surprising if this colouration did not extend to the rump.  As MG stated on Orkbird, there is nothing here to suggest other than cabaret. 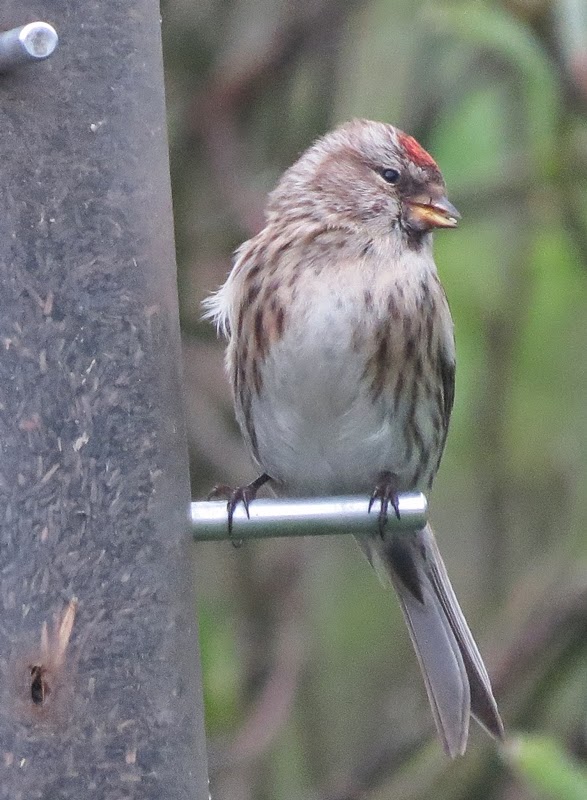 Bill shape and the broad very dark feather in the undertail coverts also point towards cabaret.

Later the same day a redpoll was heard and seen very briefly in a Harray garden, about 1km distant. This looked quite large and grey but was seen rather briefly. Call seemed quite low pitched.

The next birds turned up on 30th April. Two were feeding in the conifers next door, these were presumed to leave to the south with two others. One of the two birds, seen well, if briefly, was a very pink male. When the left, calling the trill was I thought higher pitched than the Harray bird of 26th. Later a single bird appeared on the feeders. 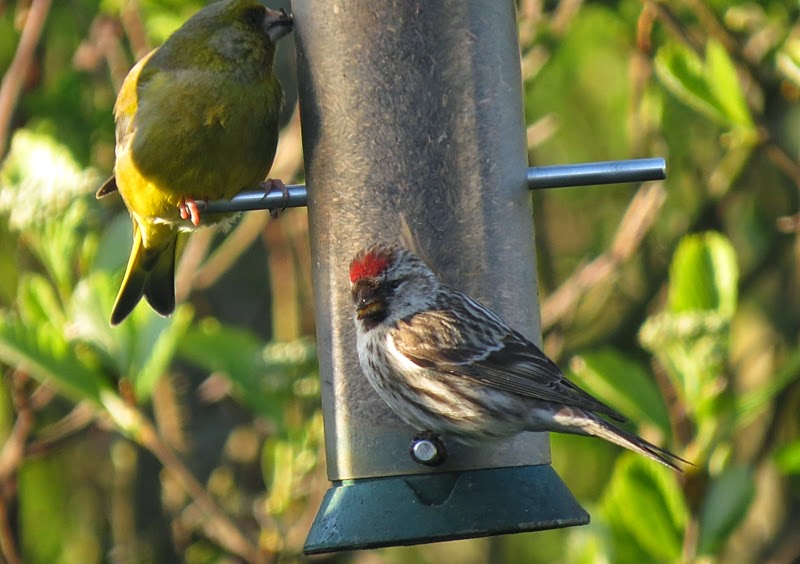 This individual looks immediately larger next to the Greenfinch, and has a very pale, grey background colour to all the plumage. The greater covert bar is tipped white, the tramlines on the back are white. However, the streaking is strong on the flanks and extends nearly to the undertail coverts, could this be a Greenland/Dark Iceland Redpoll? I think this is f.islandica. 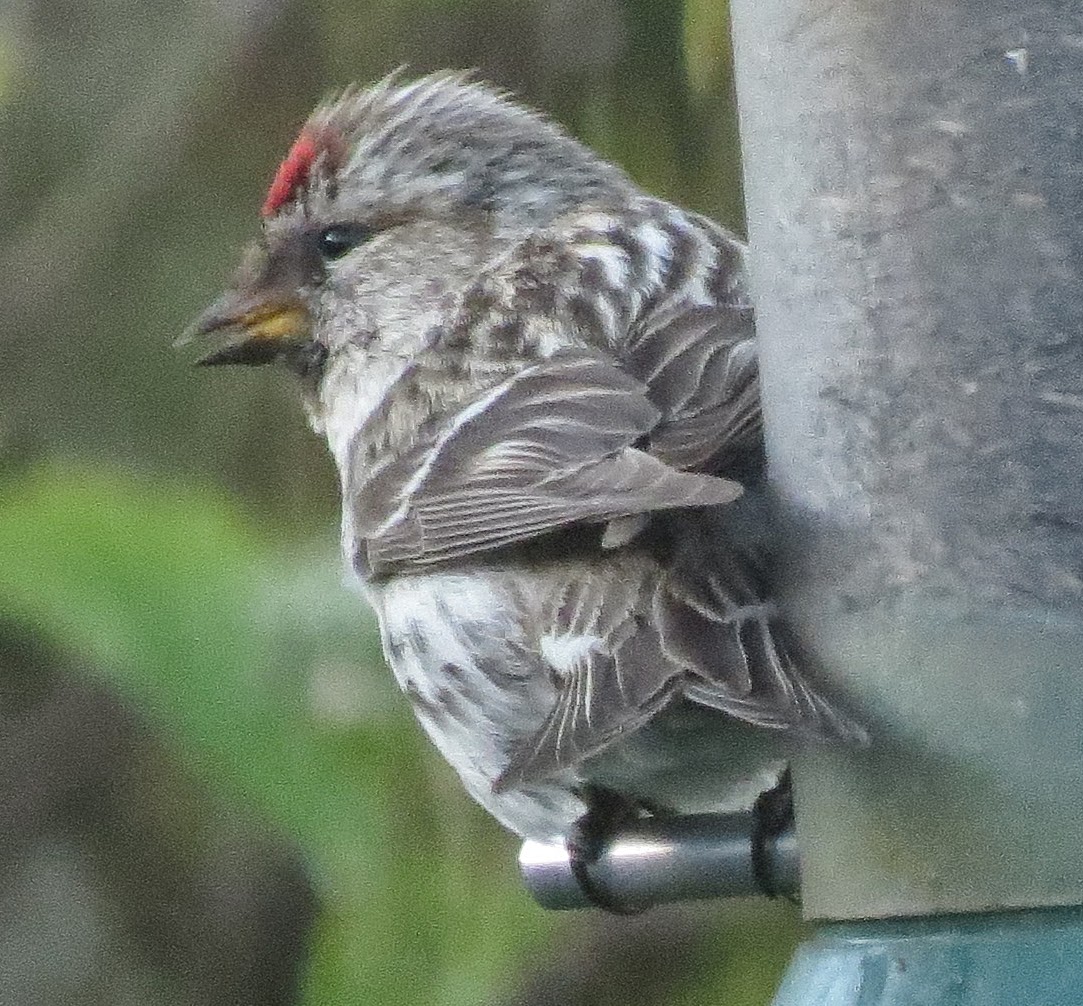 Interestingly this bird did not associate with the flock of four, and when initially one of those returned, or a different bird perhaps, they were not seen at the feeder concurrently (for the first day anyway). Bird 2 often showed its rump which had a white ground colour. 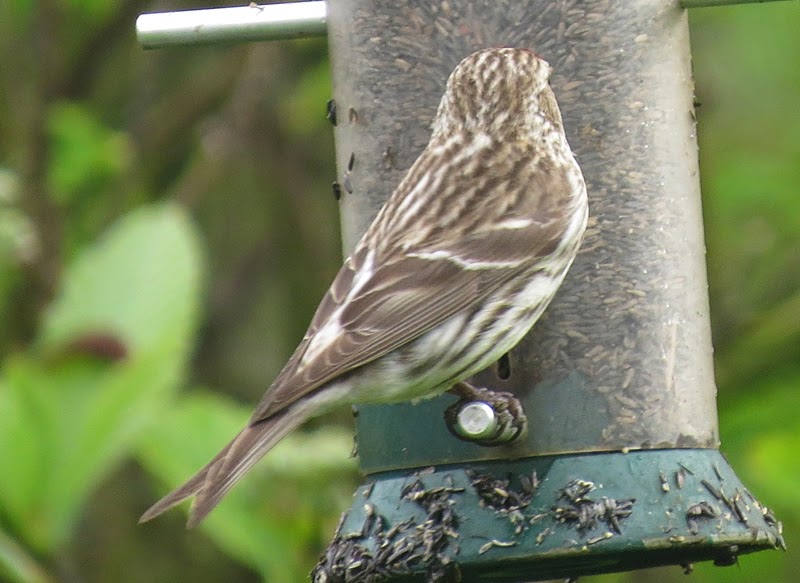 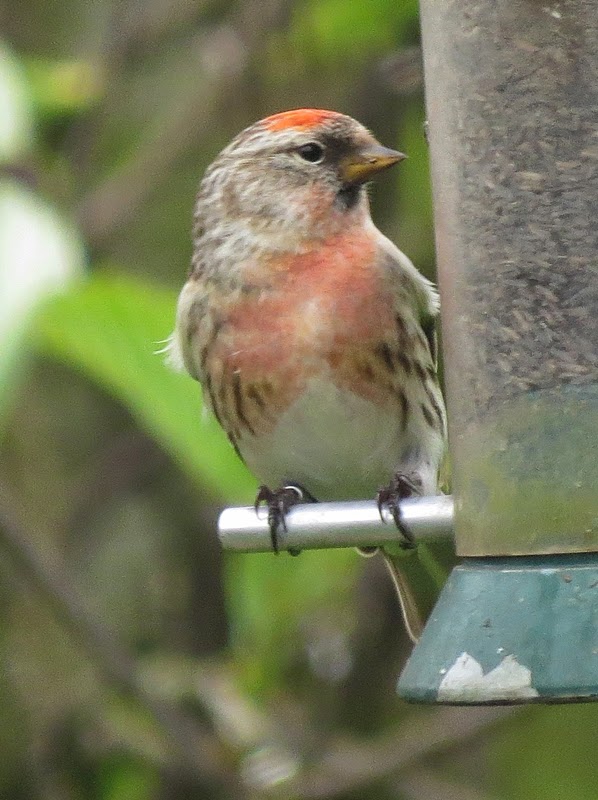 ,
This is Lesser Redpoll (cabaret), from 3rd May. It was present with the dark Greenland/Iceland flammea islandica and when the two birds briefly faced side by side looked to be about 85% of the size. 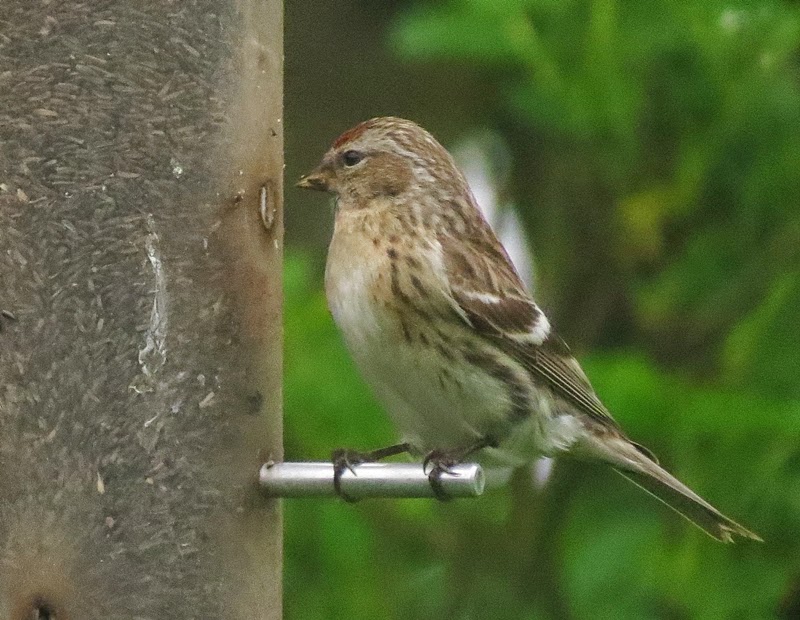 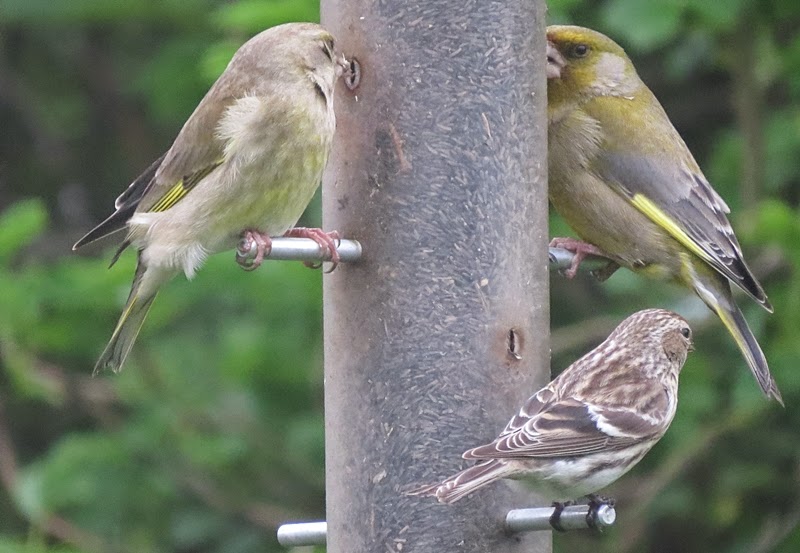 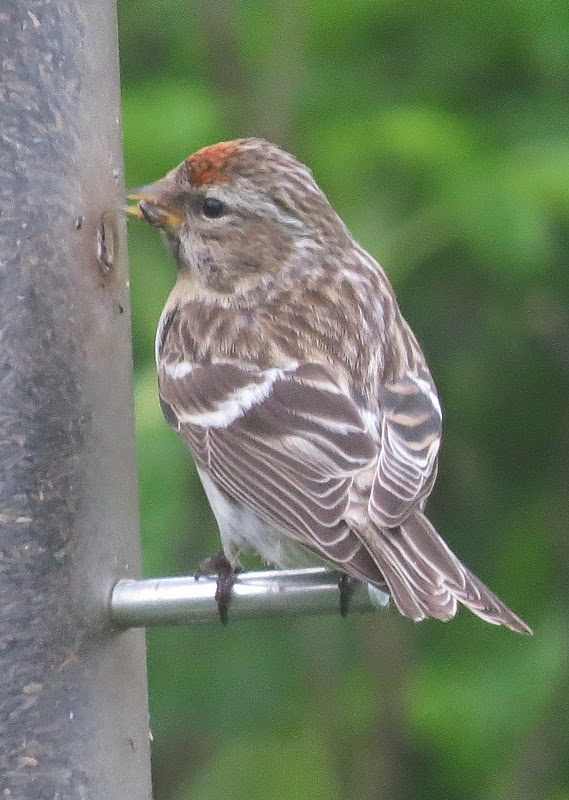 Clearly has a white rump with, apparently, little streaking. From this view looks much more like flammea.

My view would be that this is flammea but I'd be interested in any argument to support or contradict this view.

I'd put money on both cabaret, the 2CY (at the top) and the ringed adult male at the bottom. I also really like the rostrata/islandica designation for the very monochrome bird in between. These are all the same bird?? NW birds very often show a dirty greyish cast, especially around the face and neck (been down the lum)and I guess this colouration is an adaptation with significance for thermoregulation in the polar environment. Mealy flammea doesn't really show this. So I think NW Redpoll is quite safe here too. This bird is also a 2CY, based on evident wear to the rectrices, tertials and greater coverts. The widespread occurrence of Redpoll spp in the breeding season in Orkney is not exactly new but does seem to be an annual feature at several sites across the county. With cabaret currently red listed, finding that species breeding in the county, and potentially colonising, brings some conservation significance. Much more so than, for example, the recent colonisation of Goldfinch.

Thanks Uncle. Yes I should really number the plates shouldn't I that would make it all a bit clearer.

Gradually adding photos from the past and some I've been sent. Comments always welcome.

Wowsers! The Papay bird appears, based on 6 fresh tertials with deep white fringes, to be an adult. I'd like to have been able to see more of the tail feather shape to support this. As an adult it is certainly a male, showing a little pink on the cheeks, breast, flanks and rump. My experience of spring flammea is somewhat limited and more than a little dated, but older (eg born before 2014) males should show a lot more pink than this if I remember correctly. This minimal showing (if the photo gives a true representation of this feature) is more something I'd associate with Arctic; in your case Coues' Arctic. Lovely looking bird and nice to not have to wrestle with cabaret!!

I thought we had a Coues' when we found it, I was so cold from sitting on the beach for 2 hours watching and photographing the WRS that I could barely make the camera function, I missed the opportunity to get some much better pix, not sure if JB got anything better. It was the most striking redpoll I've seen, it was also very tame (or knackered). The light was going as well which didn't help the photography. Thanks for the aging info, that's handy. Surely I might bump into you one day? Couldn't make the Stromness films the other day unfortunately or the RSPB meeting.

I may have some pictures that show the tail better, I'll have a look.

That would be very useful to see, just to complete the age diagnosis, Looking for a broad, fresh feather with an evenly rounded tip. A young of last year would show a narrow, worn feather with a pointed tip. As an aide memoire, it's like a butter knife vs a steak knife. Yes I'm sure we'll get to meet up one of these days, though I have to say my birding is extremely low key and opportunistic these days as I'm working every shift I can get my hands on! By all means pop in if you're up this way, we're at Voy Cottage, the little house in the field due east of the Yesnaby junction.