A walk with the camera.

There is a lovely green lane two fields north of us. It is full of flowers and moths. Walking across the fields and along the green lane to the moor and back should take an hour or so, yesterday it took three hours. 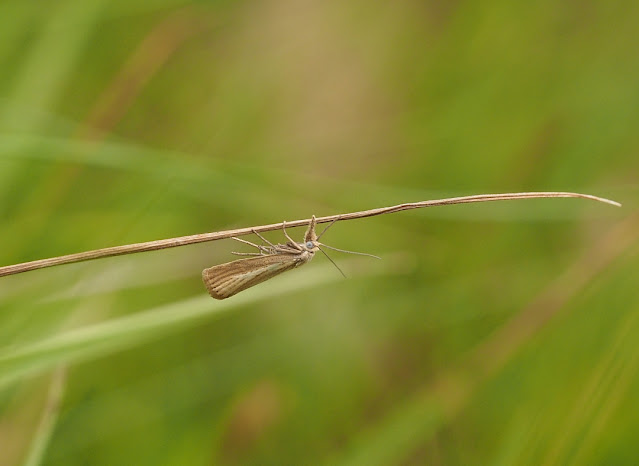 There were thousands of these, they've just begun their main emergence. A bit of a swine to photograph as they fly at the slightest provocation. They are beautiful nonetheless.

Another recent emergence and present in tens if not hundreds. Both these species were inflight at almost every footstep.

There were also lots of Middle-barred Minor, on one Hogweed there were five, probably 100 altogether. 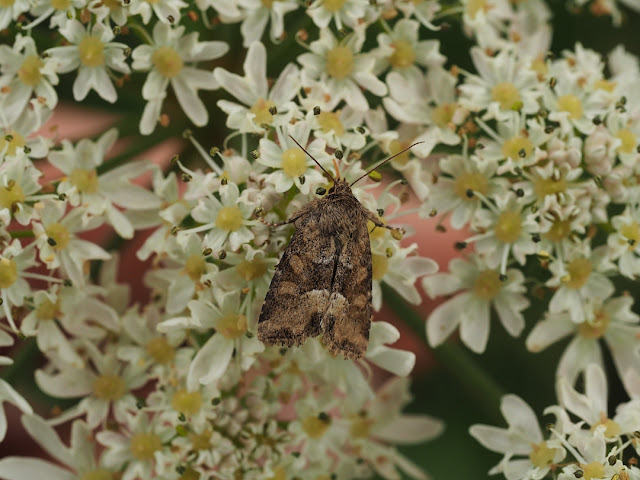 There were Silver-ground Carpet in abundance as well, and the first Celypha lacunana for the year and a few Magpie.

I failed to photograph Common Blue, of which there were a few.

But with all the common species there were a few gems. Yellow Shell is not a moth I see very often but a rather large individual eventually was photographable.

And I think this micro is Eudonia truncicolella, not the rarer E. lineola (happy to be corrected though, although the CR would want a gen det I think). 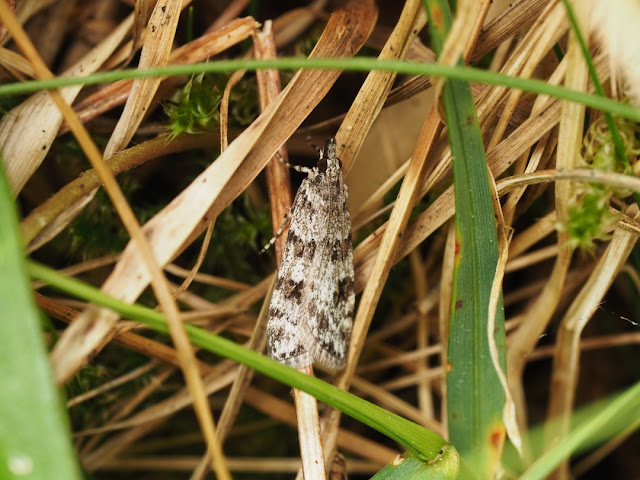 There were these two micros, not the best images, which I've yet to work out.

The first one is perhaps just a Timothy Tortrix seen from the side. But the second one is a challenge.

Amongst all the moths there were a few other things, piles of the sawfly Tenthredo arcuata sl (possibly T. notha). 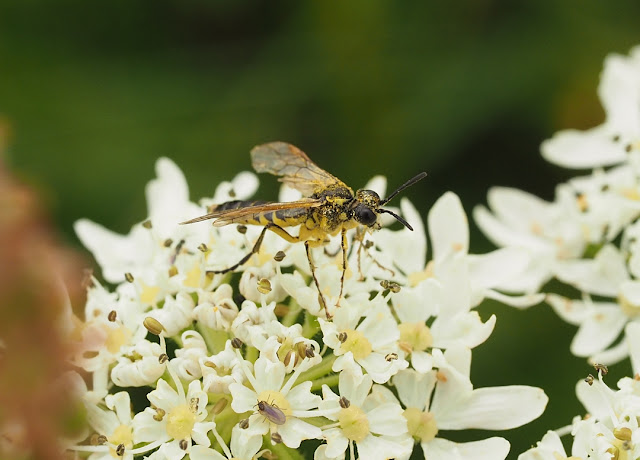 The click beetle Hemicrepitius hirtus, identified by the antennae and the tiny fourth tarsal segement without a hairy pad.

In the interest of science I allowed myself to be bitten, twice.... 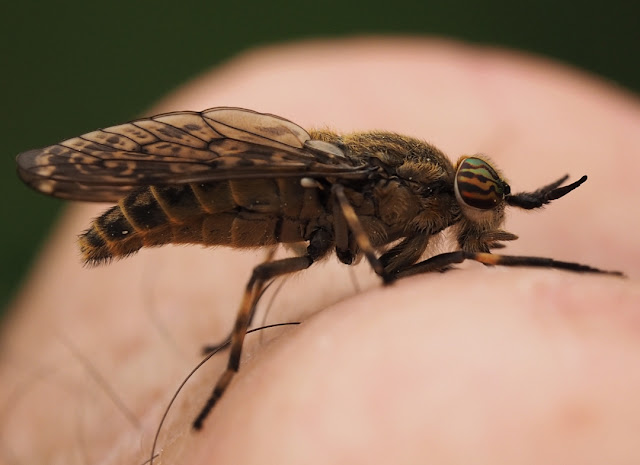 Both of these are females with the eye colour over the whole eye. You can see the antennal notch quite clearly on the second one and close-up. Males have the third antennal segement orange. It was a bit annoying for half an hour or so afterwards.

One of my favourtie things was around as well:

As well as this ichneumon there were a few Ophion sp. Yet again I'm pretty sure I saw Bombus jonellus, but no photos, so no proof. Other Bombus seen were pascuorum and lucorum s.l.

In amongst this I started to play with Google Lens. It was mentioned online the other day and there is a paper about apps for identifying things. Lens seemed to come out ok and as it is included in my Motorola I gave it a try. It is astonishingly accurate with plants, and truly hopeless with moths and other insects. On a good few occasions it came out with the correct plant identification as first choice, including things like False 0at-grass. However, the Tenthredo was identified as a Honeybee and Middle-barred Minor as a Pammene species, at least it got it to moth. The local plant recorder is about to be bombarded with my plant records which I have singularly failed to upload from "proper" photographs, sorry JC.

Thanks to MS for mentioning Public Service Broadcasting in his blog, somehow escaped my radar. Blown away. I especially love this album. 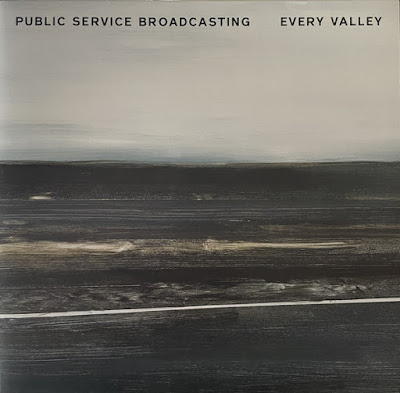 But they're all good. Playing in Glasgow in November, very tempted to make the trip.

It is hard not to make comment about the football. Disgusting racism towards young players, and beating up our Italian guests. Let alone the laser incident and booing the Danish anthem. What is the matter with people? Actually, none of this surprises me, sadly. If you have any influence at work, or are a trade unionist, pressing for this very effective and inexpensive training by Show Racism the Red Card would be a good move....

https://www.theredcard.org/education - other training providers are available.

Sadly those thugs and racist morons are beyond education - it would seem that many are destined for work in UK Government? Great post, wonderful images. What cammera kit are you using? - Dylan

I'm ever optimistic... Second hand Olympus E-M5 MK2 with the 60mm macro (I did buy that new). I love this set up, combine with some cheap extension tubes and you can get very close indeed. I previously used an Olympus Tough TG4, magic piece of kit but I wanted a bit more flexibility and quality.

Stewart, thank you. Yes, sent the Scoparia to the CR who has just said the same thing. They are tricky and I don't see enough of them. I'll follow up the Aethes, yes, I think I've had that before, just couldn't get enough definition on it. Thanks, yes beginning to get the hang of the new(ish) kit, bit of a learning curve (as with the ID).

I'm not disputing your cleg ID (after all they're always pluvialis, lol), but I would say that the 'notch' visible in the close-up image is just the gap between the end of the first antennal segment and the start of the second antennal segment. All clegs, regardless of species, show this gap which does look very much like a notch. The real notch is entirely restricted to the top of the first antennal segment and is a complete pain in the arse to capture well on camera. I spent about 10 mins last night trying to do precisely that on a pinned specimen, and I'm still not happy with the result! Good to see you getting stuck in with the flies though, or rather, letting them get stuck into you :)

Gibster, thanks, ah, I've just got the book, (retirement present) thanks for the link. I think I have seen the notch before but maybe not after all. I'll maybe swat one (gently, not splat) and take a more careful look, see if I can find a way of getting a photo. So often when I am encouraged to look more closely apparently straightforward identifications become more complicated.

Was interested in your rusts, someone here is into those as well and pointed out the red campion rust, also making the centre of the flower look dark. I'll have a a look for the Ragged Robin one in the next few weeks.