We went to Arran, as we have a few times before, and again stayed in our friends' house whilst they were away elsewhere.  I took the Heath trap with synergetic light and had a very busy time with moths, so many species that I am unfamiliar with, despite trapping at this site a few times in the past. I'll post the moths shortly(ish) and hopefully some kind readers will correct my identifications, some of which (at least) are likely to be somewhat wonky.

Going so far south there are many species that I just never see here, and of course more mammals. Badgers (almost nibbling our toes), Red Squirrels, bats (I forgot to take the bat detector) and Bottle-nosed Dolphins were stand out. I failed to identify a vole glimpsed a couple of times.

Not much on the bird front except excellent views of Golden Eagles on a number of occasions and Hen Harrier twice, not a species I've seen very often on Arran in the past. The Bottle-nosed Dolphins performed very nicely alongside the road as we drove for the ferry.

Being on holiday I took my wetsuit and there being a lack of boats, as our friends had taken their kayaks with them, I went in the water a bit, armed with a 20 quid Lidl snorkel and the TG-4.

Also got some images of Lesser Sandeel by wading around in the shallows. I found one injured one and had several goes at photographing the small shoals. I watched two bury themselves in the sand so quickly when they detected a threat; me. 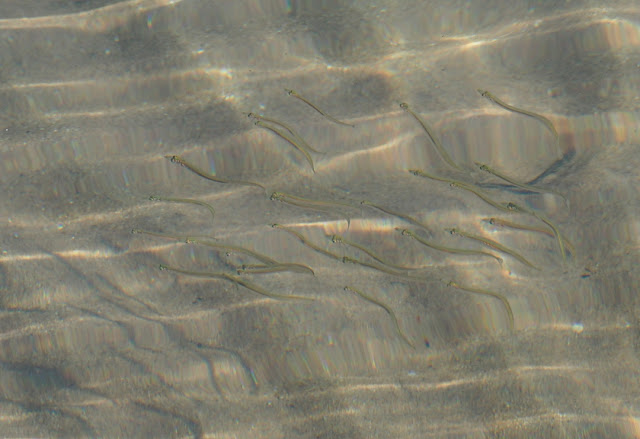 So many other things to look at, photograph and identify, I was a bit overwhelmed. Fortunately perhaps, I wasn't distracted too much by hoverflies as they weren't much in evidence, probably due to the uncharacteristically scorching weather. We couldn't really walk much in the hills as it was just too hot. Going to Coirie-Fhionn Lochan, a favoured spot was hard work and Louise joined several other trampers by taking a dip.

The water was full of tadpoles, frog I think, seem to have lost the photos. More later. Actually, Toad.

Water Lobelia - nice, not seen it before.

Steve beat me to the mystery plant ID. (Steve, if you ever find yourself on Skye at this time of year, I can readily remedy that omission. Plus Pipewort and Quillwort alongside it in one small pool I know of).

Thanks Steve and Gibster. I've been going through the books and couldn't find it. When I post all the other stuff I hope you're both going to sort out my misidentifications for me! Nearly ready for the first batch to go up. The few hundred miles make such a difference. I surprised myself by getting very muddled with butterflies as the Small Heaths in Arran look very like our Large Heaths (Small Heath doesn't occur on Orkney) and then an emergence of Scotch Argus initially caught me on the hop, I did eventually manage to photograph the Dark Green Fritillaries, a bit of a challenge. A good few data sets for the Butterfly Count.

I think we'll be on Skye next month but just for a couple of days as we head back from Lewis, I think we were last there for our honeymoon 29 years ago....

Ah! So presumably you'll be passing through Uig when you hit Skye from Lewis. Uig is where I live, so do keep in touch and if you have the time and inclination I'd be very happy to meet up and show you a few bits n bobs locally.