How I ever had time to go to work I do not know. I think I keep saying that, with good reason.

Yesterday it pissed it down all day. It had started in the evening and despite various moth trap reorganising I decided not to run traps, probably a mistake. Today is windy, sunny and warmish so maybe tonight if it calms. But, anyway, yesterday was taken up painting the frame of the new conservatory/lean-to. A storm damaged the old one two years ago and ever since we've been trying to decide what to do with it. We've now had a bespoke frame made and it will be installed next week, but before that it needs weather proofing, I'll have a couple more days of this during the week.

Anyway, the moth trapping I have done produced two nice Large Wainscot's a species I didn't see last year and the micro Agonopterix heracliana amongst a reduced cast of other more frequently captured things.

There are a few likely migrant species around, Angleshades and the dark morph of Silver Y, so perhaps when I can get the traps running there might be something else of interest. Pleased enough with the Large Wainscot anyway.

Having painted the back wall white, then placing a light trap next to it I found 50 or 60 craneflies. I think most were  Rhipidia maculata but amongst those there were some Tipula paludosa, Tipula confusa and Trichocera regelationis as well as Limonia nubeculosa.

I have a few cranefly specimens to look through when I get a minute.

TD and BR came and checked out the bat(s) they thought it could well be Soprano Pip'. I really haven't used my bat detector much, and I don't read instructions. But the recorded wavelength should be the deepest, something I hadn't understood. Indeed, I tried the following evening and then realised why 55kHz was more likely the reading. So a tick, most likely, but no bats since the wind blew, but maybe they'll reappear.

I've not really been properly birding much but I did find a Little Stint on the beach at Warbeth a week or more back. The day before yesterday I noticed there were huge numbers of duck on Bosquoy so I tootled off down there, especially as the Atlantic winds had been blowing. A rather awkward to see drake Ring-necked Duck was a fair return.

Nothing much else on the birding front, Buzzard and Kestrel have been around a bit, not espcially frequent on the patch of late. A bit of early Pink-foot movement the other day with three flocks through, heading south.

The odd trip to Birsay hasn't turned up much other than a Brent Goose which I failed to photograph, so this Cormorant will have to do instead.

Whilst we were away in Dundee there was a fair bit of whale action off Northside. We managed to catch the tail-end of it with three Minke on the Sunday, not the best views and nothing like the views that folk had had the day before.

I've found this Dipteran again recently, and I couldn't remember what it was called, fortunately it's illustrated in the Brock books so I tracked it down. Then entering the record in iRecord it wouldn't go in as the genus has changed or not been changed or something, always irritating. Anyway there were eight or nine on the fruit/sugar pile. 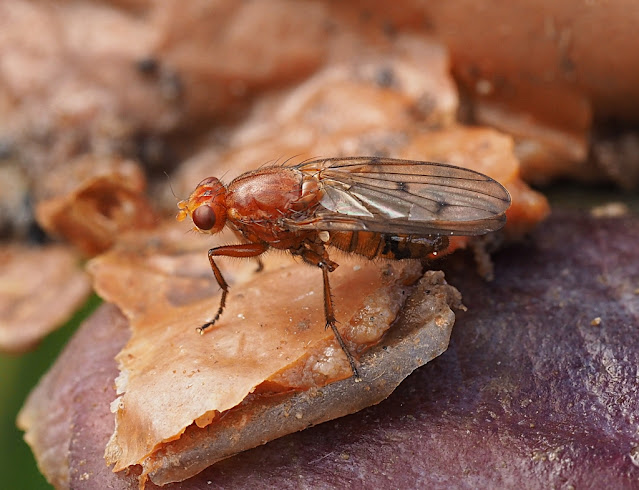 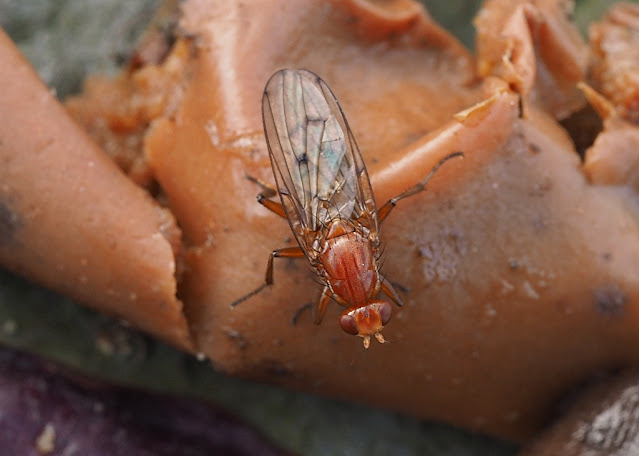 As well as painting I've been mending things, one of our downstairs windows has a bit of rot so I've been sanding and cleaning it up, during the operation I disturbed this huge spider.

And lastly, during one of my checks of The Shunan a Brown Hare finally just stayed still.