Back from hols two.

The mystery moth from yesterday has turned out just to be an odd Dusky Brocade, unless anyone has any better ideas. SS had, it's a Nutmeg and I'm dead chuffed! Thank you.

I had some hopes of this being Confused but the stigma are large and the subterminal line is not right, despite the leading edge of the forewing appearing to be pretty straight. Just a weird, worn and pale Dusky Brocade, but very happy to be corrected. And corrected I was, very grateful as Nutmeg is uncommon here and NFM. Always very happy to be put right with my IDs.

A wander at Northside this afternoon in perfect cetacean spotting conditions (flat sea, grey sky) eventually produced four or five distant Risso's Dolphins, one of which did a nose flip and came pretty much right out of the water. More unusual was the potter wasp Ancistrocerus scoticus which I've never previously found at this site, it was feeding on Wild Angelica. 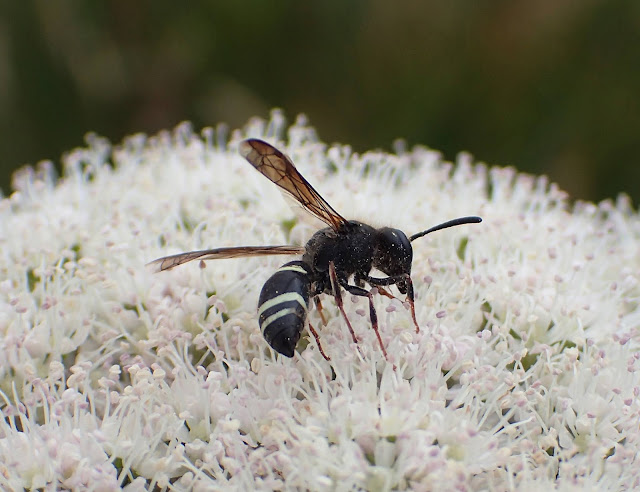 I was again checking all the Ragwort for the hoverfly Cheilosia bergenstammi, no bananas. However, a nice Middle-barred Minor.

There were lots of Swallows but not many other birds of note, a couple of dark phase Arctic Skuas chasing Kittiwakes being the best. This Meadow Pipit posed nicely though.

The main purpose of the outing was to suss out some safe snorkling spots, and I think we found some spots where we would feel safe and find some interesting things.