Not keen to venture out this morning but the hound required walking. A two coats morning for sure. To make matters worse Louise had taken the car down to the pony and I'd left the Kowas in it. The Nikons required a bit of a clean, but they're still a functional pair of bins, I didn't bother with a camera.

Woodpigeons clattered out of the trees. Then minutes later a male Sparrowhawk.

The Curlews across at Loch of Bosquoy were bothered and after a minute or so I located the botherator, a Peregrine which was trying hard to seperate one off the flocks. A couple of times it forced a bird out but, from what I could see, without making a successful kill. 40 odd Golden Plover whooshed past me in the field, also panicked by the raptor.

I wandered back up the hill, stopping at the Wee Wood to collect a bag of litter for extraction. The last attempt had not been successful, producing just a couple of mites and a Linyphiidae which I wasn't going to attempt to ID. I went for the ditch this time, leaf litter and scraped a bit of soil in to the bag as well.

Up the hill, looking at the house, mass panic from the feral pig's, everything flying around, but something is quicker, sharper, scorching round the trees, and I just get enough of a glimpse of the female Merlin before she's behind the house and off. So a few more species for the year. Expected but nonetheless good ones.

I've not seen Shortie yet this year, but Louise had one yesterday, caught in headlight glare at the bottom of our road.

Yesterday I did my WeBS, the forecast is not great for the weekend. It sometimes feels like a bit of a chore but in decent weather yesterday it was entertaining enough.

Counting Bosquoy some Whoopers sailed close. An early Oystercatcher was of note. 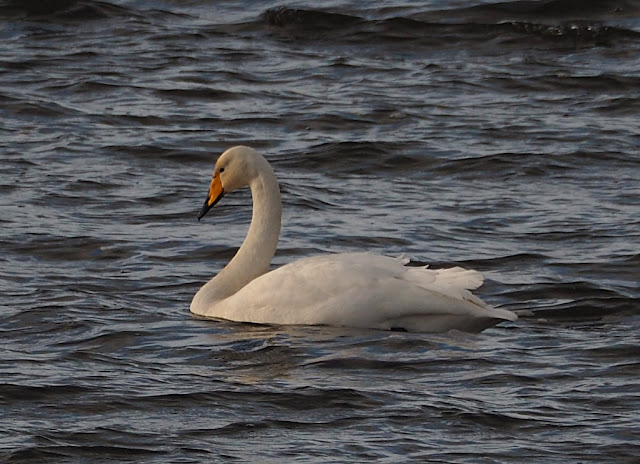 I moved on to Loch of Sabiston, more of interest with a pair of Pintail. Another lone Oystercatcher. And then, as I was about to leave, a Little Egret flew across the loch and landed on the near shore. 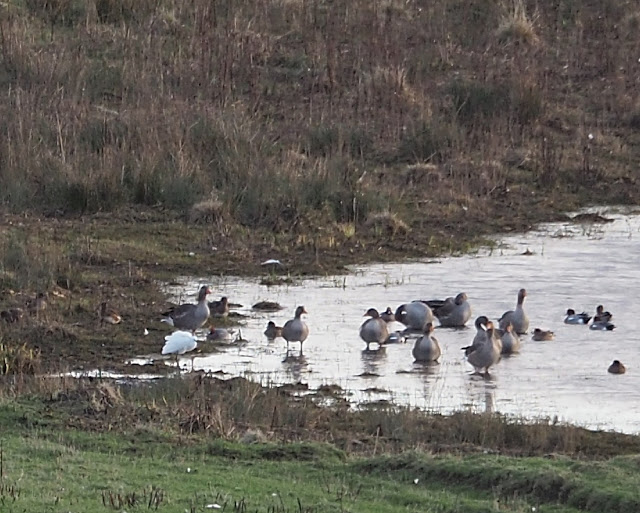 An astonishingly excellent photo of Little Egret. Loch of Sabiston is a bit of a hotspot for this species, but it's a while since I saw one there. What is required is one on The Shunan, or at least on Bosquoy.

More visits to the Brough of Birsay causeway have produced more species for the one new species a day project.

It was particularly nice to find live animals of Grey and Painted Top Shells, not ticks but good finds.

The new things were all seaweeds, or lichens.

I've allowed myself the two lichens because in the past I've confused them and beeen unclear between them. I'm not sure I realised there were two species. I think in the past they were both Verrucaria species but the taxonomists have been playing.

Then a few new seaweeds.

I think I need to do some microscopy to prove the Cladophora, so I can't have that, yet. However, the good news is that last week's Corallina officinalis seems to be ok.

Not really sure about this one. And I was hopeful that this anenome was something different but I think it is just Beaded.

So, I've properly recorded two molluscs which I'd already counted, a couple of new seaweeds plus the Coral Weed, and two lichens. Five more species.

Raptors, rain, squally. Is that a What3words location? Just tried it, apparently not.

I'd not heard of What3Words before. So, no, that wasn't the plan. On a different tack, and somewhere I might investigate that website (or perhaps not) over on my other blog you might like my list of the best 25 (or 26) best pop singles of all time, which I've just finished (until I change my mind and doodle with it again). https://themanydays.blogspot.com/